“Hatching” is a gut-wrenching commentary on growing up, motherhood, and generational trauma that’s become a new horror favorite of mine. 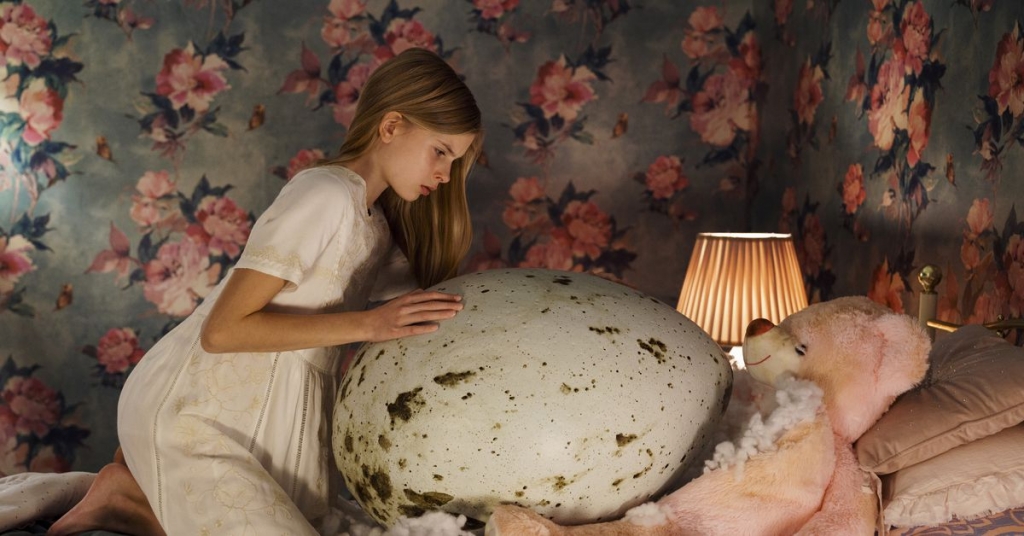 Hatching started with a simple idea: “A boy hatches a ____ out of an egg.”

Debut director Hanna Bergholm purposely excluded the type of creature to keep the audience on their feet. It leads them to guess what happens next, which was nearly impossible to do with the twists and turns.

By changing the main character into a young girl, Bergholm transformed this concept into a gut-wrenching commentary on growing up, motherhood, and generational trauma.

Hatching follows the story of 12-year-old Tinja (Siiri Solalinna), whose mother (Sophia Heikkilä) is a prominent online blogger showcasing her family’s effortless perfection in their day-to-day lives. But, of course, the more effortless things appear, the more work goes into them. With her first upcoming gymnastics competition looming, Tinja feels the weight of those high expectations more than ever.

When she rescues an orphaned egg to care for, it sets her and her family down a spiraling path of violence and chaos that threatens their “perfect” home.

It’s been a while since I’ve been able to sit in a theater where the audience was audibly screaming, gasping, and cringing in disgust. It’s a body horror film that uses gore effectively to terrify its viewers. Though it isn’t a bloodbath, filmmakers managed to strike a balance between gross scenes to turn your stomach and atmospheric tension that made it too horrific to look away.

There’s so much to be said about this film, and it’s a dream for anyone who loves analyzing the movies they watch. 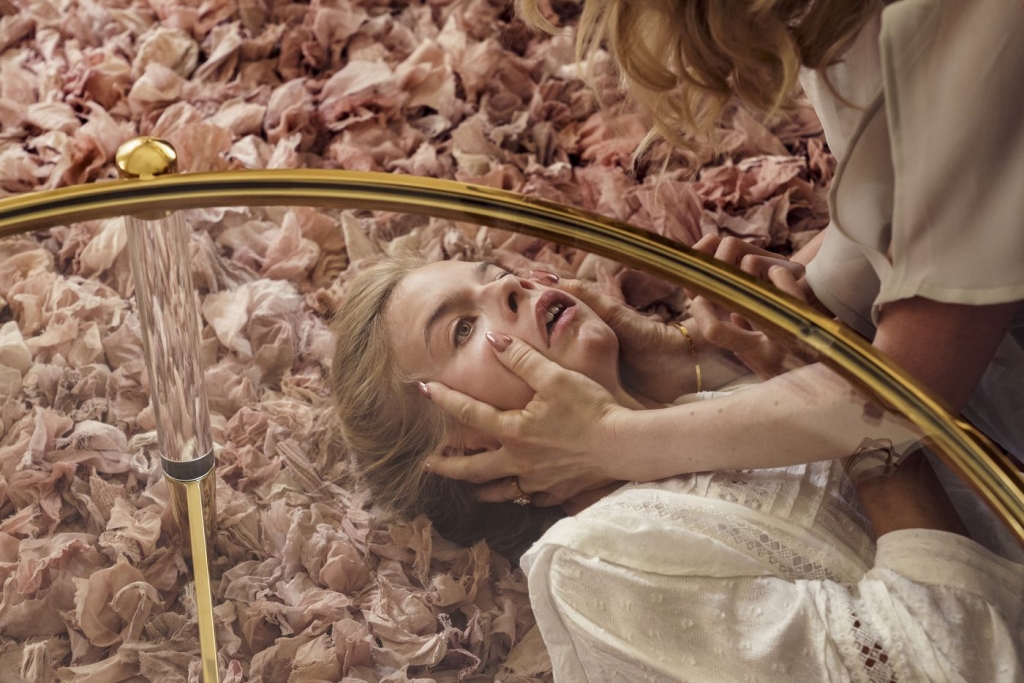 It was conceptualized in 2014, and it seems as if each day since then, Bergholm was adding more minor details.

In a Q&A following an L.A. screening of the film, she spoke about how, as a woman, she felt the need to have to do “a little bit more” to reach the same levels of success as her male counterparts. And she did it all while making this film.

Most of Hatching was filmed in Latvia in a suburban neighborhood with matching homes. While this is the dream for many, something was unsettling about how similar each home was compared to how isolated they felt. Yet, it still felt normal with a twinge of unease. The intention of this was to show that “no matter where you live, you can imagine this happens in your country.”

They focused heavily on using the uncanny valley to unnerve viewers. For example, there were no newspapers or product logos, and the home’s backyard was devoid of any sounds of nature, such as birds chirping, despite being next to the forest.

The set design and cinematography were meticulously planned. There are no shadowy corners in the home, which, according to Bergholm, was meant to represent that the mother didn’t allow dark secrets within her family. The only shadowed places we see are under Tinja’s bed and in her closet, two spots where she hides the creature.

To tie into this theme, most furniture in the home has rounded edges, with much of the décor being transparent glass. The colors used are muted to show that strong emotions won’t be tolerated, including the sun, which seemed cold even while shining down.

Inside the house, the almost imperceptible hum of an air conditioner can be heard in the background. Everything about it felt cold.

The creature is one of many crowning achievements of Hatching. When conceptualizing it, Bergholm drew inspiration from E.T., old alien films, and Cronenberg.

In addition, animatronic designer Gustav Hoegen, who worked on films such as Prometheus and Star Wars, was brought on to design the creature and bring it to life.

Bergholm wanted it to have a physical presence on screen, so they opted to have a puppet made for the creature instead of editing it digitally. A total of five puppet masters were needed to operate it, and the only digital additions added were changes in the creature’s pupils.

As grotesque as the monster is, Tinja feels a maternal responsibility towards it and projects her own wishes of how her mother would treat her onto their relationship. Where her mother would brush her hair and scold her for how disgusting she was, she would brush the creature’s hair and reassure it of how beautiful it was.

Tinja hid it and treated it as though it were the dark parts of herself that she wouldn’t allow anyone to see but still offered love to it.

Siiri Solalinna’s performance of Tinja is truly impressive, not only because of her age but also because she had never acted before this movie. 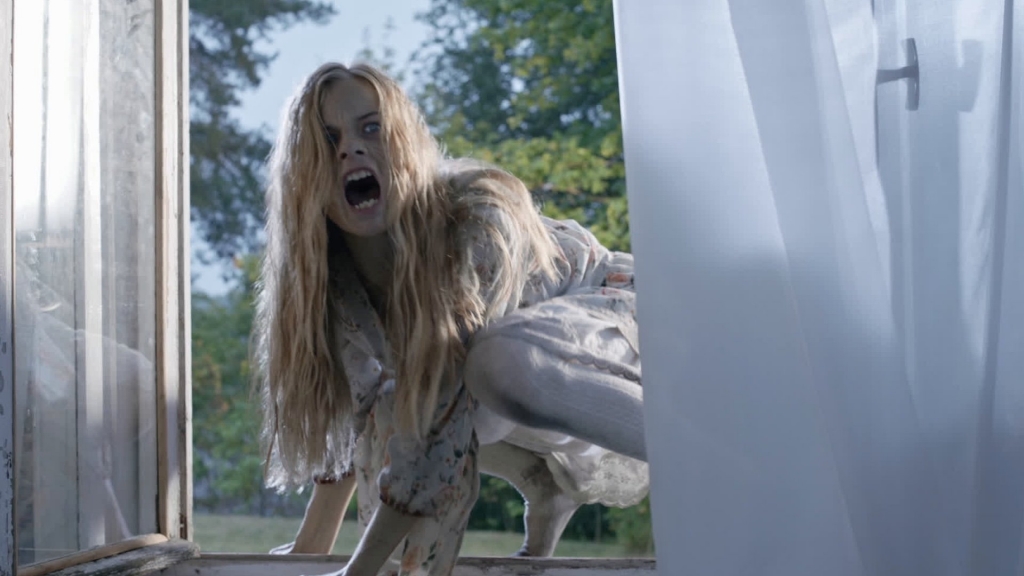 Filmmakers auditioned 1200 girls, and it’s clear to see why they chose Solalinna. She puts on a bone-chilling performance of dual personalities that makes you forget it’s the same actress.

Sophia Heikkilä’s portrayal of the mother, whose criticisms and harsh words were always offered in a hollow “loving” way, is equally uneasy in a different way.

The ending of the film leaves room for discussion. It was left purposely ambiguous, so the audience could draw their own conclusions and is sure to bring about plenty of discussions.

HATCHING is an impressive directorial debut that features jaw-dropping acting, grotesque special effects, and scares that leave you thinking about the film long after watching it.