Tense and well-acted, “Held” is a smart feminist thriller — with a scary premise — that held my attention throughout. 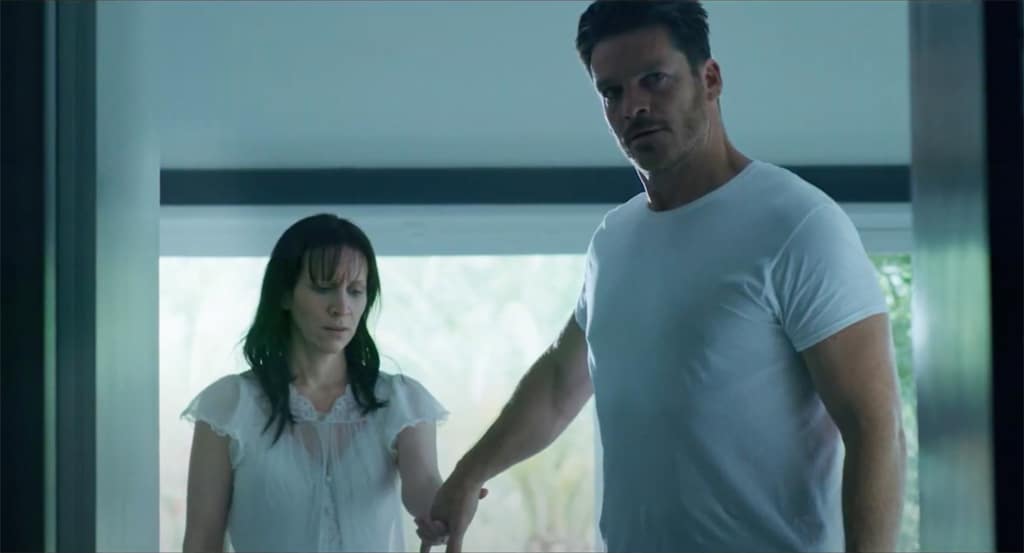 SYNOPSIS
A couple’s failing marriage is put to the test when they are held hostage in an isolated vacation rental by an unseen voice that commands their every move.

In the feminist thriller Held, directors Chris Lofing and Travis Cluff bring us an interesting look at the patriarchy (or the desire for it) that comes close but does not quite hit its mark.

In this millennium, most of us have almost forgotten how looked down upon women in general were, and what was expected of wives by misogynistic husbands. That reality right there gives me the chills. The subversion of traditional gender roles is hopefully changing things for the better, but this movie makes it clear that there are men out there who are not too happy about it.

The film begins in a flashback to a young girl in a car with some jerk-off guys where, unbeknownst to her, things are about to go downhill quickly. That she is about to be raped is noticeably clear, but I was glad that the filmmakers didn’t try to show it.

Jumping ahead to a woman in a rideshare car, it is to be assumed this is the same girl years later. This is important only because most victims of a sexual assault are in the mindset that THIS WILL NEVER HAPPEN TO ME AGAIN!

So, even if you cannot see it from the outside, our protagonist is a tough female — a survivor.

The woman, Emma (Jill Awbrey, who also wrote the screenplay), is being driven alone to a remote, luxurious vacation rental for a romantic anniversary getaway with her husband, Henry (Bart Johnson). The chatty rideshare driver Joe, (Rez Kempton), seems creepy at first, asking her if she is going to be all alone in the middle of nowhere. In the end, however, he just likes to talk and is hoping for a big tip. Emma has an obvious fear of men, probably because of her horrible experience in the past. It is obvious in the way she holds herself and how nervous she is when he tries to help her with her suitcase.

I’m not sure why, but this is one of those films where I started talking back to the screen, very early on. That can mean one of two things. Either the film is dumb and I’m entertaining myself to get through it, or the tension is such that I have to chatter to get my nervous energy out. Luckily, it was the latter.

The constantly building tension in Held was one of the best parts and kept me engaged, even as I started to figure things out fairly early on. 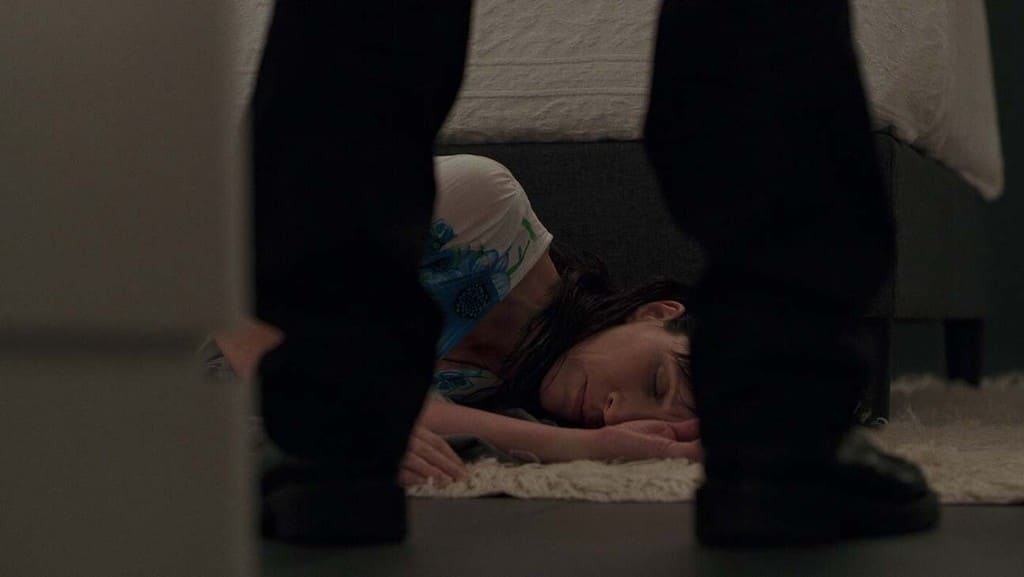 The house itself was amazing.

Glass walls everywhere, perfect, simplistic décor, surrounded by what looks like an orchard — and no neighbors for miles. Too amazing though. When you see the multiple locks on the doors, the window coverings that were solid instead of curtains, the surveillance cameras, and the fancy alarm system, it’s a red flag for serious trouble. Essentially, it’s Alexa on steroids, and it’s hard to imagine anything good coming from that much modern technology. Of course, I’m sure that’s one of the points the writer was trying to make.

The house, when locked down, could easily become a prison, something Emma and Henry would soon discover first-hand.

Henry surprises Emma by showing up a day earlier than expected. Only, it’s not quite the romantic reunion. They are both awkward and irritable with each other, and it quickly becomes clear this is not a happy, ideal marriage. He tries to set the stage for intimacy, but Emma is aloof and withdrawn. To ease the tension, the alcohol flows liberally. Unfortunately, the liquor in the house has been drugged. And it isn’t long before both pass out.

From here, as you might imagine, things get very dark and twisty.

When she wakes up, Emma discovers she is wearing clothing that isn’t hers. There is freshly made coffee by the bedside, which neither of them made. Checking out their closet, they find all their clothes have been switched to something reminiscent of Ozzie and Harriet (For those of you youngsters, that’s a 1950s TV show). Their phones are gone, and there is a mysterious Voice telling them they cannot leave. The Voice explains, “There are rules, and you must obey them.”

Naturally, they try to make a run for it, only to find something has been implanted under their skin behind their ears. If they do anything other than what they are told, they receive a nasty shock so bad it makes their ears bleed.

Soon, we discover the main intention of the Voice seems to be getting Emma and Henry to fulfill their roles as dutiful husband and obedient wife. It’s an old-fashioned idea of the perfect couple, where the husband must open doors for his wife and give her compliments and presents, while the wife is expected to obey and serve her husband; looking pretty, cooking him meals, and satisfying his desires.

Despite the unrealistic technology, I liked this film because I believed the main characters. 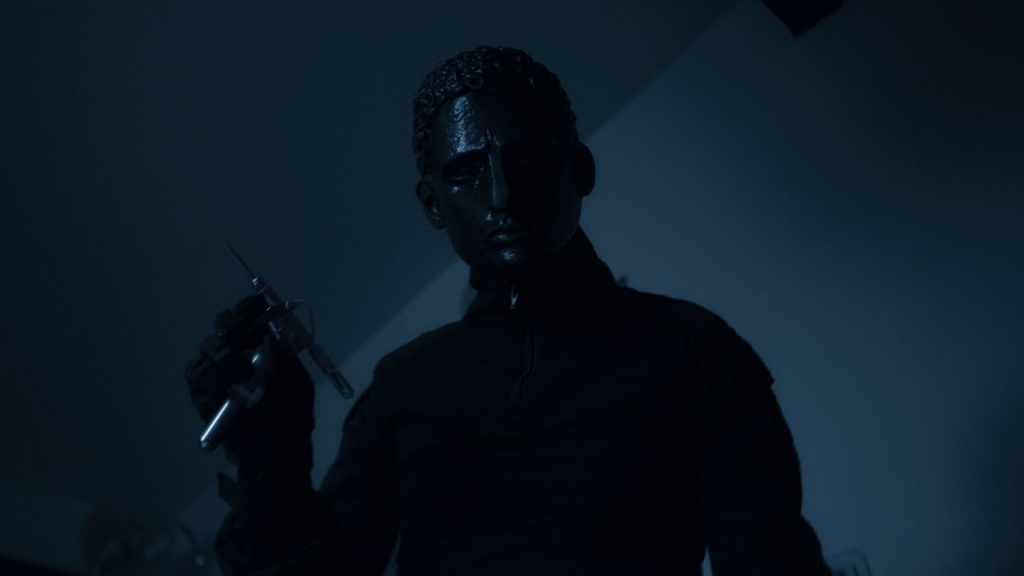 The acting was exceptionally well-done. The cinematography was great, too. Obviously a simple location, with a small cast and crew due to Covid, but I felt claustrophobic and scared right along with them. The shot of them having dinner, from overhead, illustrated how distant emotionally they really were. I liked that a lot. I rooted for them to work together to make their escape. I must admit, any menacing voice telling a woman to obey and be a Stepford Wife is guaranteed to make me cringe and get very pissed off.

When things start being revealed, and the shit hits the proverbial fan, I really got into it. Were there some plot holes? Well yes, but I easily overlooked them. A terrific score helped keep the tension high, and as I said, the acting was top-notch.

The creepy masked guy in black was the persona behind the Voice. He was the least scary part of the film for me, and I found it much more chilling when he’s just a disembodied, all-seeing voice barking orders and warning of consequences.

The suspenseful finale was unfortunately not too much of a surprise, as it felt like the stage was set early on for this reveal.