Steven Kostanski’s much-buzzed-about “Psycho Goreman” is an unlikely story of friendship, family, and “frig off!” that is hard not to love. 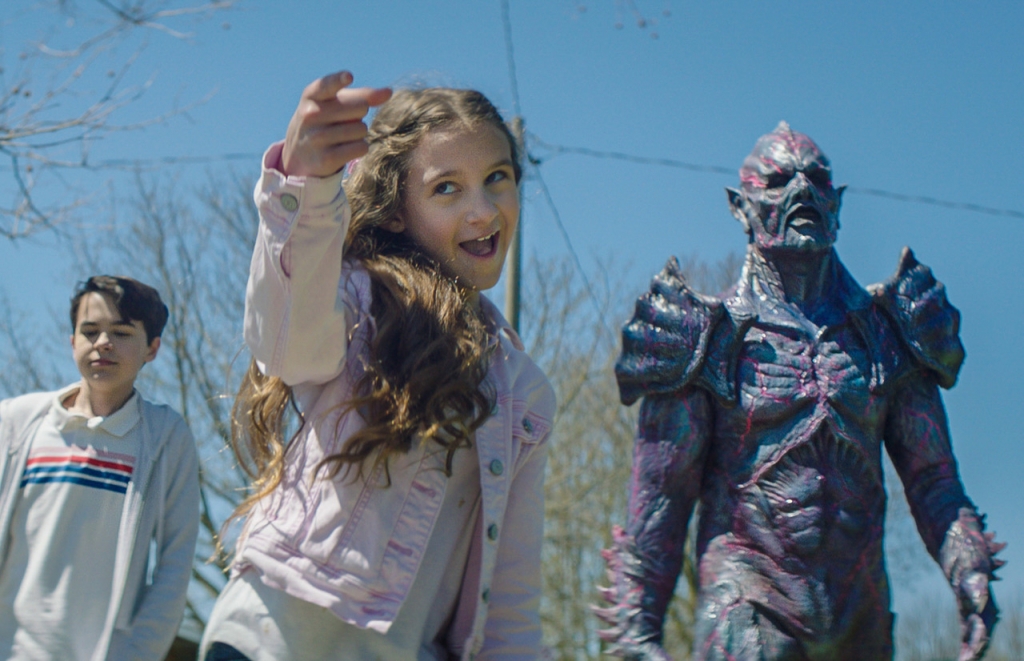 Crazy ball-playing siblings Mimi (Nita-Josee Hanna) and Luke (Owen Myre) discover the magical Gem of Praxidike during a deep digging excavation in their backyard. The glowing rock belongs to a presence they encounter the next night, the deadly alien overlord known as the Arch-duke of Nightmares (Steven Vlahos – voice).

He’s returned from a long imprisonment on earth and ready to resume his quest to destroy the galaxy. As he prepares to kill the children, he discovers that Mimi is in possession of the gem, giving her total control over him —  a position of ultimate power she gleefully embraces.

Hanna shines as Mimi. She’s bossy, fun, unaffected, self-absorbed, and somewhat diabolical as she lords over both Luke and PG.

PG quickly becomes a member of the family while the parents, Greg (Adam Brooks) and Susan (Alexis Hancey), battle their oppositional marital roles.

Where men in films are often portrayed as leaders and protectors, Psycho Goreman disrupts that dynamic by putting the ladies in charge.

Perhaps in a few millennia you will make worthy adversaries … but not today.

Luke easily submits to his far more domineering sister, and Greg is shown as weak and helpless while Susan is in charge of keeping the household running.

The shift in dynamic does come in handy as the film progresses, allowing Mimi and PG to have a believable power struggle with each other.

As PG plots to get his gem back to overtake the galaxies again, a noble warrior known as Pandora (Kristen MacCulloch, Anna Tierney – voice) and the Templars council are alerted to PG’s escape by the gem’s activation.

While Mimi and Luke take PG out on the town — creating local havoc and forcing Mimi’s unrequited love interest Alasdair (Scout Flint) to undergo an unforgettable transformation — Pandora transforms her way to earth in a human disguise (Roxine Plummer) and hunts down PG.

When it comes to the Arch-Duke of Nightmares, I have to admit, I have a crush. 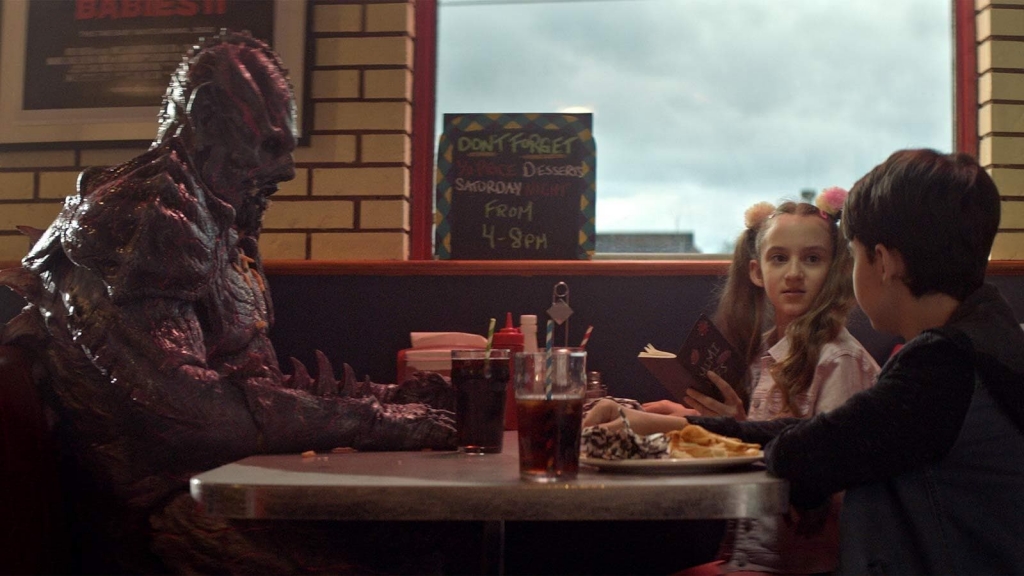 I think he is a galactic sexpot!

You can appreciate the unique design of this grey, purple, and magenta pink-veined creature.  I love the profound shoulder blades, the ribs, and the back fins — reminiscent of the Black Lagoon creature while extruding a Godzilla fierceness.

Shout out to Matthew Ninaber for being able to wear that thick suit for long hours of shooting each day.

PG’s sarcasm and homicidal witty dialog drive most of the comedic elements of the film, matching his worthy counterpart in Mimi. Both PG and Mimi seem to have met their match, as shown through a comedic montage of their resistant but growing friendship.

As writer and director, Kostanski’s talents make him a true architect of filmmaking due to his meticulous vision and extensive background in special effects.

The look and the feel of the film along with the score remind me of the work produced in the late 1980s and the early 1990s. 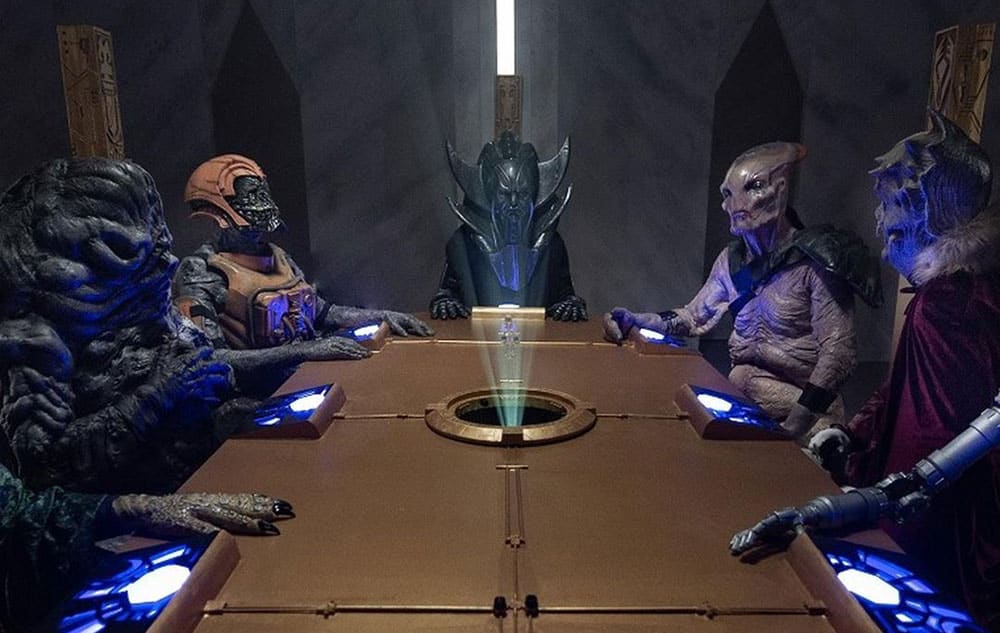 PG, much like 2015’s Turbo Kid, shows a small love for these decades but doesn’t drench itself in nostalgia, allowing the film to stand out as an original tale.

As of fan of creatures and special effects, I am in complete awe of all the integral textures and designs of the Templars and Paladins of Obisidian characters. It is truly invigorating to watch new characters sculpted for cinematic perfection from the exceptional MASTERSFX team.

Psycho Goreman is poised to thrive as one of Shudder’s most original and cult-followed films for years to come, evident by its domination of pop culture.

Cavity Colors created an extensive t-shirt line inspired by the film, while plasticmeatball.com has sold out of most of the film’s official merchandise. Additionally, Waxwork Records recently released a colorful deluxe LP soundtrack. And Fangoria’s 2021 return featured an insightful interview with Kostanski. 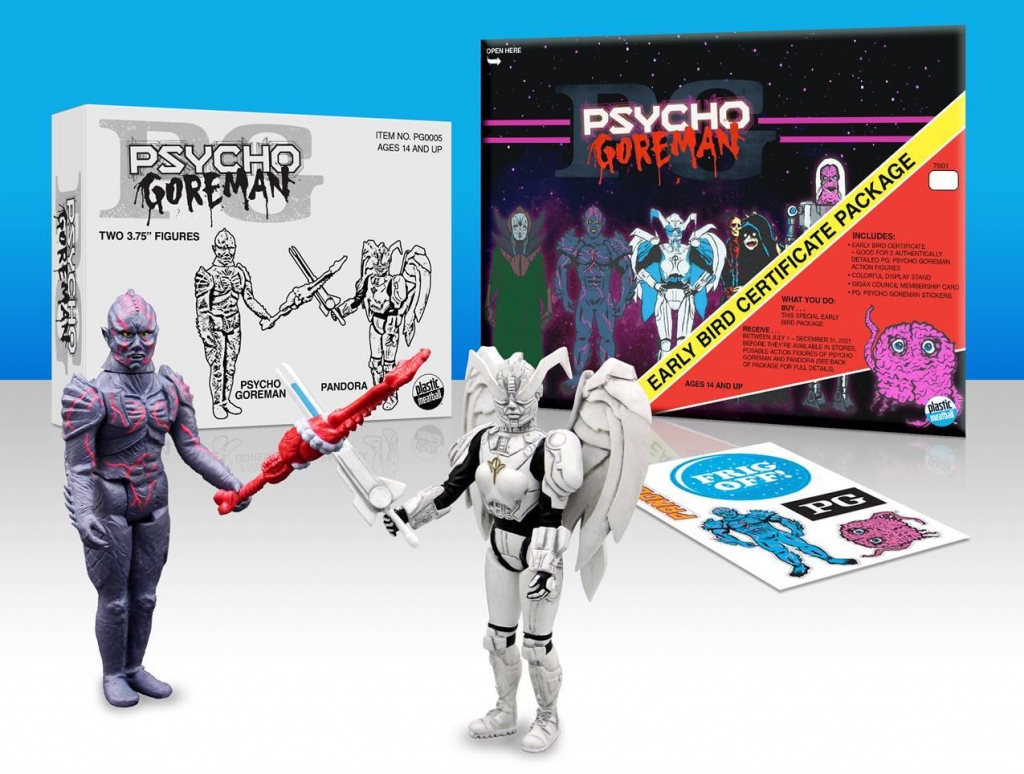 Fix yourself some yummy snacks and get comfortable. It is time to laugh again, time for something new, and time to tell 2020 to “Frig Off!” I am inviting you to experience the galactic comedic chaos of Psycho Goreman now streaming on Shudder.