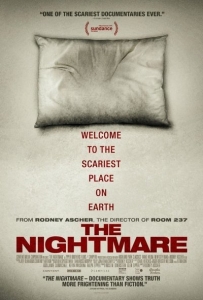 The Nightmare is a 2015 documentary-horror hybrid centered around the first-hand experiences of eight individuals who have suffered from sleep paralysis. It’s the sophomore feature from director Rodney Ascher. His 2012 debut documentary Room 237, a provocative inquiry into the mystique of Stanley Kubrick’s The Shining and the world of obsessive cinephiles, earned him critical acclaim and considerable buzz.

Ascher is earning a name for himself as a unique voice in the world of documentary filmmaking, with his extraordinary visual style and his ability to turn the genre on its head. He has the uncanny ability to make documentaries for people who don’t like documentaries. In the case of The Nightmare, he manages to present a work of non-fiction that has the ability to provide legitimate scares and an overwhelming sense of creepiness. It’s a documentary that also works well as a solid entry into the horror genre.

Room 237 was far from an authoritative critical analysis of Kubrick’s masterpiece. What made it so compelling was Ascher’s ability to creatively explore the strange and powerful inner workings of the human mind. It’s the same reason The Nightmare is such a fascinating and highly entertaining watch.

In the case of Room 237, we explored the power of art to drive obsession and the susceptibility of the brain to form elaborate patterns and connect seemingly impossible dots. With The Nightmare, we dive into the mysterious and largely unexplained condition known as sleep paralysis, which seems to turn the human brain into the ultimate horror show.

Each of the eight interview subjects shared eerily similar stories involving being suspended in a not-quite-dream state, in which they are awake and fully aware of their surroundings, but are completely paralyzed and unable to make even the slightest movement. They describe a feeling of helplessness and utter terror as they experience all manner of ghostly, demonic, or alien-like visitations.

All these horrific visions are brilliantly brought to life by Ascher, as he uses exceptional sound design and visual effects to recreate the experiences of his subjects, allowing the viewer to share in the visceral impact as we become fully immersed in the nocturnal dreamscape.

Just as with Room 237, Ascher is not really interested in explaining or debunking anything presented in the film. In fact, each of his subjects offers their own interpretation of their experiences, ranging from the strictly scientific to the religious to the paranormal. Far less concern is given to the actual causes of sleep paralysis than its disturbing effects on the human psyche.

The Nightmare, like its predecessor, succeeds through Ascher’s ability to showcase eccentric storytellers and then breathe vivid, cinematic life into their dark imaginings. He manages to pull off something uniquely impressive with this film, striking a difficult balance between legitimate horror and sincere investigation.

The Nightmare is a compelling documentary exploring the mysterious and disturbing condition of sleep paralysis. Told through a variety of personal accounts of sinister late night visions, brought to life through horrifying reenactments and special effects, this film also works as an effectively creepy and chilling horror movie.