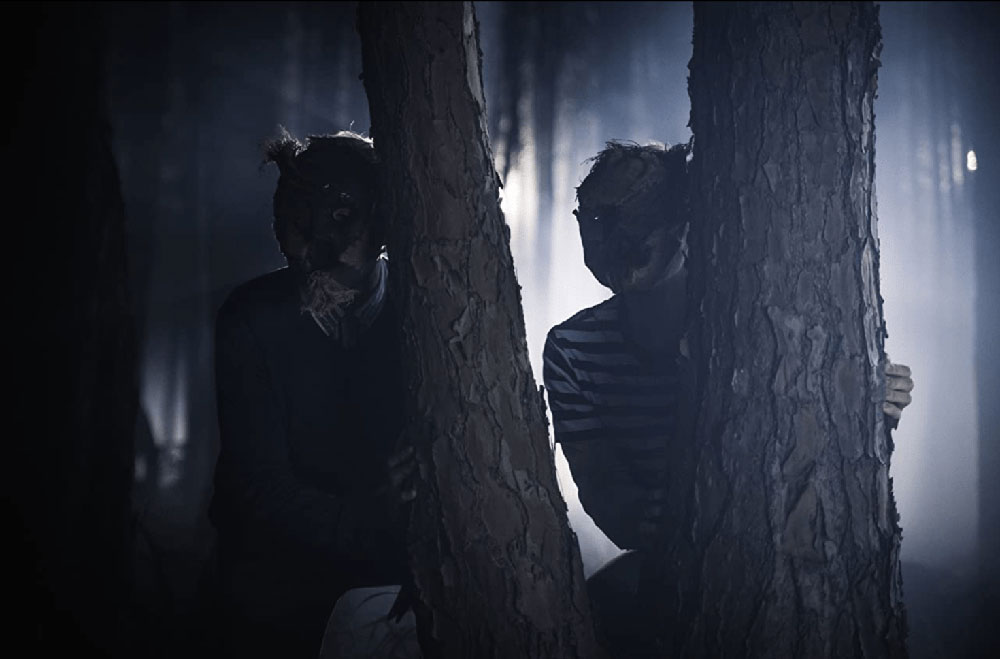 Directed by Alister Grierson from a screenplay written by Robert Benjamin, Bloody Hell is an outright gem of a film that manages the formidable task of being both satisfyingly brutal and legitimately funny. It’s as sweet and charming as it is tense and gory. That’s no easy feat, and rarely has a film pulled off such an ambitious genre blending exploit with such ease and effectiveness. Producers Brett Thornquest and Joshua Paul explained the concept in a press blurb: “What would happen if a character like John Wick walked into the home of a deranged family with dark secrets?”

Bloody Hell opens on a heart-pounding chase through the dark and scary woods of Helsinki, Finland. A young girl is running for her life, while being pursued by men in scary animal masks and an unseen creature. When she reaches the end of the woods, the men corner her and warn that she can never escape family before she dives into the icy lake. It’s a chilling cold open that sets the tone for a film that promises to be as acutely focused on horror as humor.

We then get our first of many dramatic tonal shifts, moving from Helsinki to Boise, Idaho. An unassuming but physically flawless ex-military man named Rex (Ben O’Toole) waits in line at the bank, hoping desperately to get a few brief minutes to chat up one of the tellers he has a crush on. While he’s in the middle of asking her out, armed men in masks burst in and begin robbing the bank.

In Bloody Hell, even the bad guys are charming. Thus, as one of the robbers walks up and points an assault rifle in the face of a terrified teller, he quotes A Fish Called Wanda, and I know beyond a shadow of all doubt that this film is for me.

It’s the first of many spot-on film and genre references. 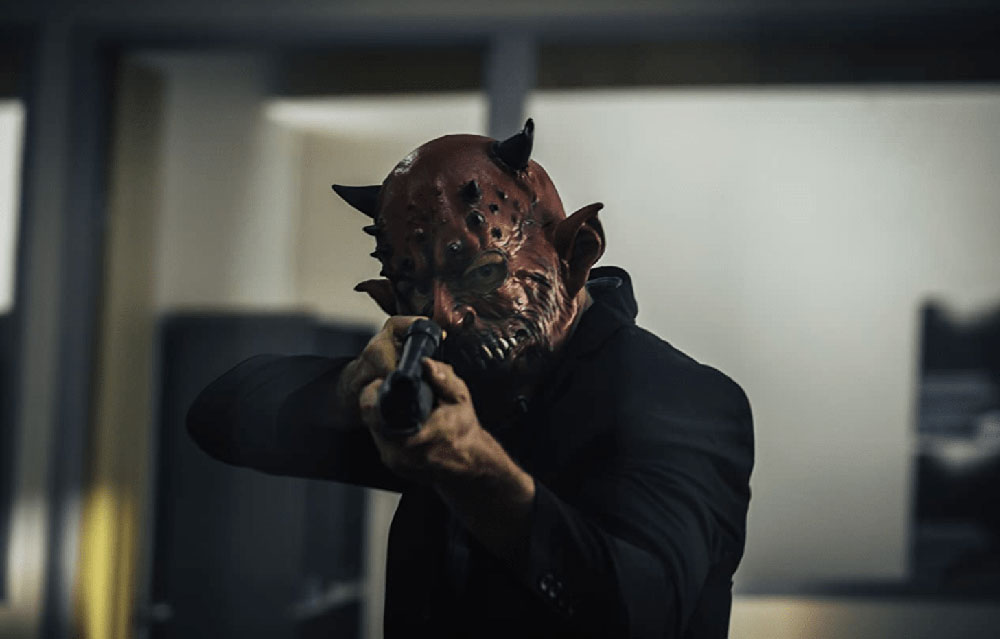 In fact, half the fun of watching this film comes from catching all the witty homages sprinkled throughout Benjamin’s exceedingly clever script.

We then get a great, visually engaging and highly kinetic credits sequence intercut with bits of narrative that keep the story moving quickly and creatively, without bogging us down in exposition or extensive plot set up. We learn that Rex tried to be a hero, single-handedly taking on the robbers and saving the hostages. Unfortunately, one innocent victim gets caught in the crossfire, and Rex ends up on trial for reckless endangerment — forced to take a plea bargain that lands him in jail for eight long years.

We swiftly move to the end of his sentence, as Rex takes on the difficult task of re-assimilating into society, only to realize he’s become a local celebrity. Stalked by paparazzi while he’s trying to eat lunch, he’s suddenly joined by a physical embodiment of his inner voice. From this moment on, his “other” self, also played by O’Toole, is an ever-present fixture. And it’s a damn original and entertaining way to convey Rex’s state of mind and significantly ramp up the film’s comedic appeal.

Desperate to start a new life, Rex decides to move to Helsinki, a location he picked by randomly throwing darts at a world map. Seeking adventure and anonymity, he imagines paradise. But a brief cut back to those menacing Helsinki woods, and another victim for a bloodthirsty beast, foreshadows the actual hell that awaits him.

After a strange encounter with an even stranger couple in the airport, Rex climbs into a taxi, only to be abducted. He wakes up shirtless, hands bound by rope, hanging from the rafters of a dark and seedy basement. To make matters worse, he’s missing his right leg.

However, in a testament to the genius of this film, even this frightening ordeal manages to maintain a light tone thanks to O’Toole’s boundless charm, wit, and likability. 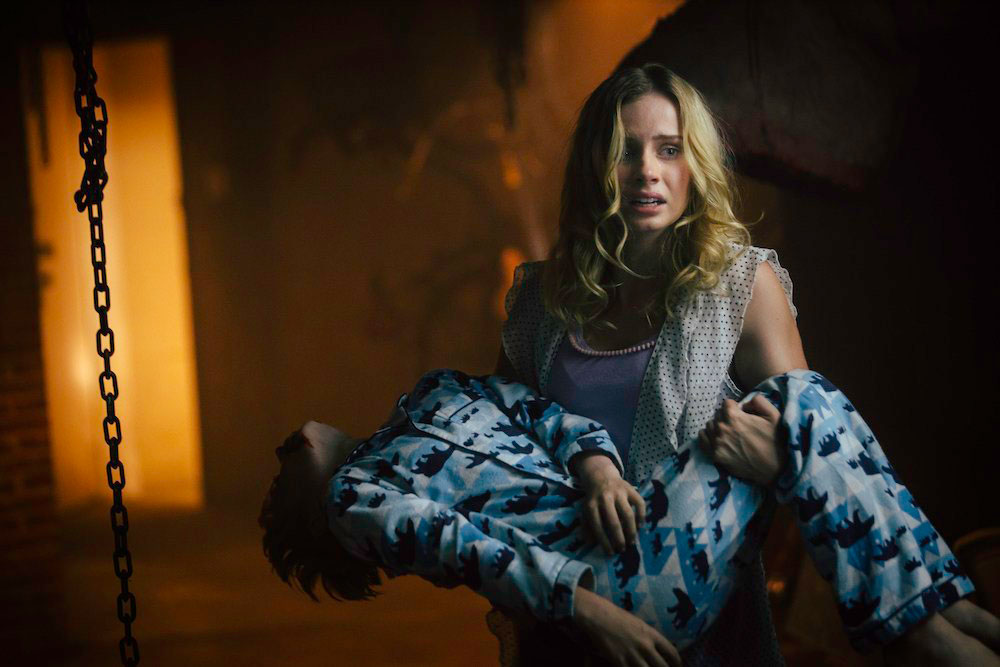 The banter he has back and forth with himself, as he tries to maneuver the situation and plot his escape, is endlessly entertaining. Lines like, “It’s going to be Big Trouble in Little Finland” and “How did that dude get away from that crazy bitch in MISERY?” made me smile ear to ear.

As Rex begins to unravel the mystery of who abducted him and why, forming a connection with the kind daughter of his captors (Meg Fraser), the film ramps up the madness and mayhem — becoming completely unhinged in the best possible way, while delivering a bevy of unexpected twists and turns.

O’Toole plays Rex with such gleeful abandon. I literally want to see this actor in every film from now on. And I now want nothing more than a Bloody Hell sequel.

There’s not a dull moment in this entire film, and every single strange and surreal beat of it just works. With a great soundtrack, stellar performances, extraordinary direction, and a unique and engaging story, it’s an impossibly good time that I wanted to revisit as soon as it ended.

Bloody Hell made its World Premiere at the Fantasy Film Fest in Germany on September 13th, 2020 and made its North American Premiere at the Nightstream Film Festival on October 9th. I can’t wait for genre audience to discover and devour this deliciously twisted and unbelievably charming Australian export.