We checked out all the killer shorts from the outstanding North Bend Film Festival, and here are our favorite six stellar standouts.

The North Bend Film Festival took place on July 15-18th and the short blocks were drizzled with horrific treats. From a variety of filmmakers providing a varied selection of creepy flicks, we’ve picked out the best of the spooky moments.

From a surprisingly engaging horror musical that takes you on a journey of emotions, to a throwback 80s piece that’s both hilarious and bloody; from a creepy doll stop-motion piece to a haunting tale of trust and inner demons, the films are all very different from one another, but so good in their own sub-genres.

These are our top six shorts in no particular order. 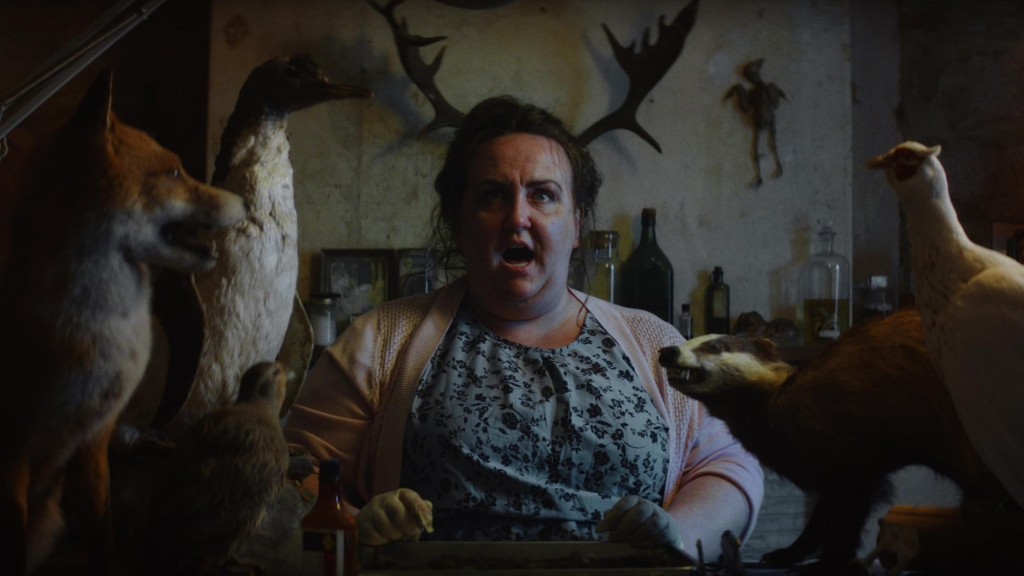 A woman looks to fulfill her taxidermy dreams of stuffing a human body, but in her search for the perfect match, she finds more than she expected.

First, we see the gritty scenes of a taxidermy shop where Araminta (Alison Fitzjohn) is hard at work, perfecting her creations. Then it happens; we find out that Stuffed is an extremely well-produced musical.

Taking a dramatic turn with the music production, Stuffed keeps the viewer engaged throughout its entire strange ride. Araminta confides (or sings) that she wants to take her craft to the ultimate level, of preserving a full human body, but she is a professional. So, she takes to the internet to find someone who will consent to let her reach her goals.

Luckily, she finds her perfect match with Bernie (Anthony Young). A man, who wants to escape the inevitable aging process, feels he has good reason to be Araminta’s subject. He agrees to the project and heads over to her place, where Araminta continues to be a damn professional who is all about consent first.

The pair get to know each other a bit too well and have to decide what direction their plans and dreams will actually take. Will they move forward with the original idea, or have they found a new dream within their new relationship?

Director/writer Theo Rhys and co-writer Joss-Holden Rhea truly amaze with this masterfully done short. Wrapped up tightly but not without fleshing out the characters and storyline, it is impossible to not be invested in this story. 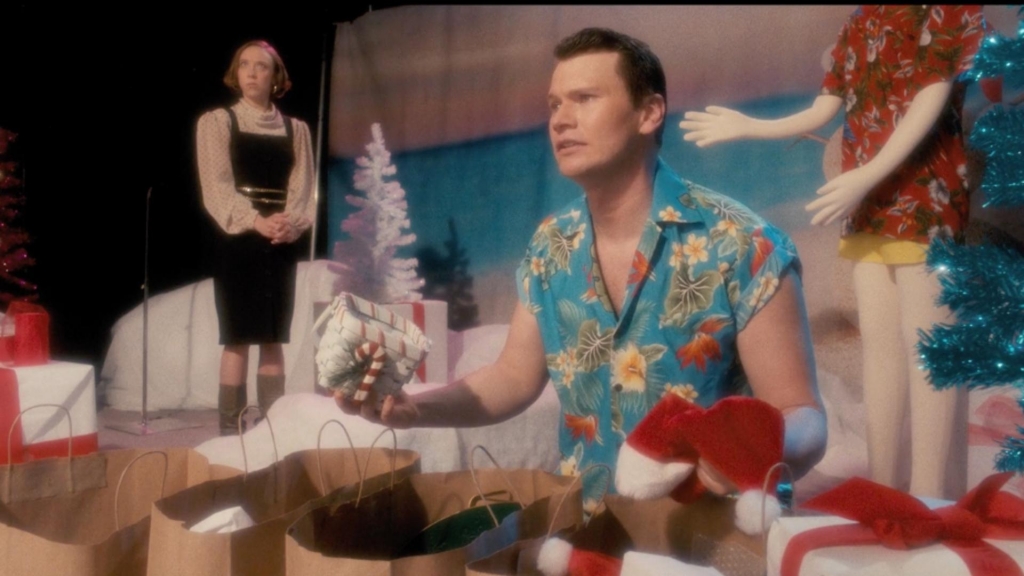 A woman will do whatever it takes to be with her dream man and she doesn’t care if no one else can see him.

Immediately throwing vintage vibes in our faces, Still Together begins by bringing us right into the 80s with a piercing theme song and blindingly bright images.

Starting out in a department store (of course), we meet Kate (Clare McNulty) who is in charge of creating a winter wonderland display. Her manager is very proud of Kate’s creativity, although her snobby co-workers just tease and torment her (even at times right in front of the boss).

What is Kate’s secret to tolerating the bullying while making such wonderful displays? She’s in love! It just so happens to be with a 1,000-year-old Nordic warrior trapped inside one of the mannequins she uses for her display. And don’t let 1,000 years old throw you off. This dreamy hunk of a man really seems too good to be true, and it’s honestly impossible to tell if he is.

Leading to hilarious situations every time someone walks in and the bulking warrior is flipped back into a featureless mannequin entangled with Kate, STILL TOGETHER  takes us on a really, interesting ride. Director/writer Christopher Piazza and co-writer Sarah Ruth Blake do a stellar job of mixing the vibrancy of the era with the gruesome body horror we all know and love. 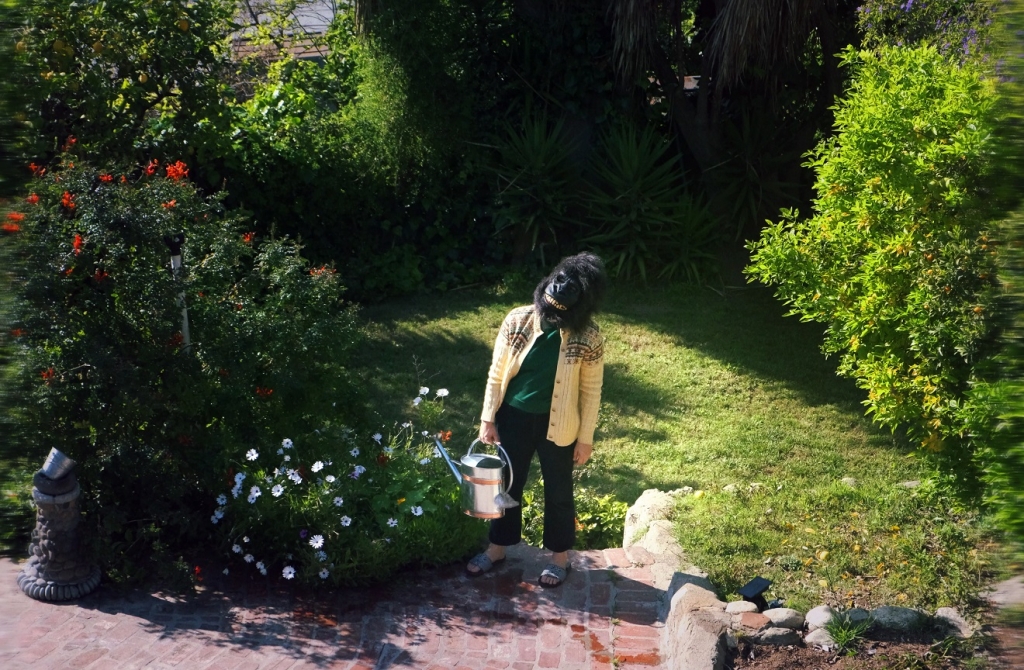 A very, very sad woman gets help for her melancholy in a much more permanent way than she expects.

Starting out, we meet Tuixén Benet (who also co-directs) telling us all about her stuff. She tells us all about how she has a home, food, a flushing toilet, and even a best friend. But, despite all these impressive attributes, she is still so very sad.

All-day it seems Tuixén can’t do anything but cry. She wants to feel better, she cares for her neighbors and friends, she is grateful and deserves some relief. That’s when a mysterious package shows up on her lawn with “Solution for Sadness” scribbled on the outside. Confused, Tuixén only finds a gorilla mask in the bag. Desperate for a remedy to her woes, she tries it on.

The events that follow are dark and not at all as expected. Tuixén learns about a secret society and how there is more to collective happiness than just how she feels.

Solution for Sadness is layered with deeper meaning, symbolizing a world that asks us to put a mask on for the sake of others, sometimes to the detriment of ourselves.

Without giving away more than I already have, you’ve got to take a look at this fantastic little film! Written and co-directed by Marc Martínez Jordán, SOLUTION FOR SADNESS  is an amusing kind of entertaining that is simultaneously thought-provoking.

A miscarriage drives a couple to uncomfortable lengths, as something grows beyond the womb.

From writer/director Carolina Sandvik, this stop-motion nightmare takes us on a creepy journey through the lens of an expecting father. When his wife tragically miscarries in the bathtub, the couple is left to deal with the lonely and horrific aftermath.

The husband gets his wife to bed and preserves the blood from the tub in a tank. Eventually, he notices something growing in the blood. Unprepared, he attempts to cope with his grim surroundings, while his wife attempts to heal her body in the same environment.

Without a word of dialogue, the dolls are left to express the events and mood of the film, and it is surprisingly effective.

From subtle eye movements to a cluttered home, made of the tiniest and impressive props, the film adequately lets us feel this adverse and uncomfortable place. 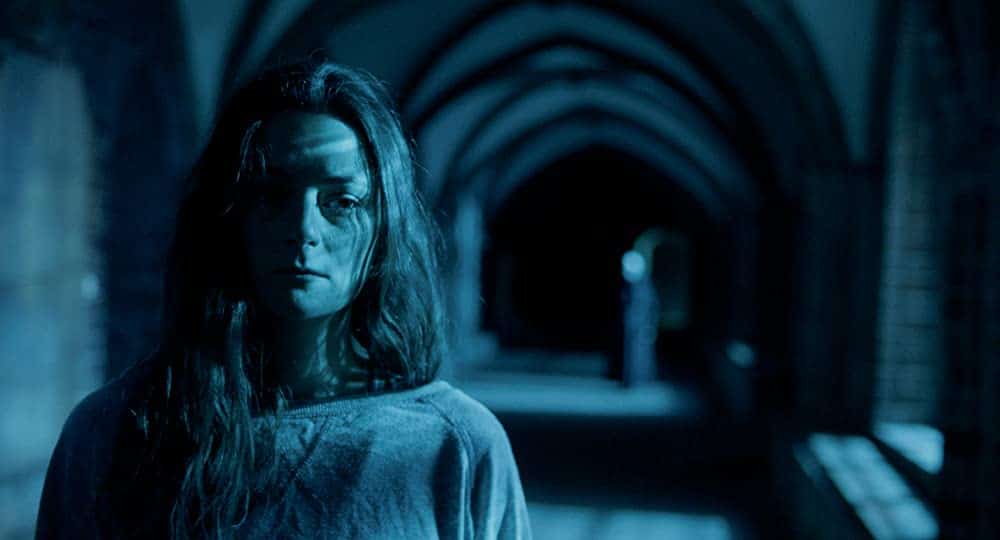 Two backpacking friends have to learn to trust each other and their instincts, but not everything is as it seems.

As Cracks begins, we meet Iris (Lea Van Acken) getting up from bed to walk around a large church where she is startled by a looming presence. We learn Iris has a history of not just sleepwalking, but she also tends to see things and people. It’s a combination that leaves us on the edge of our seats for the majority of the film.

Her traveling partner Nicole (Athena Strates) attempts to show that she cares about Iris and her condition, but the line of understanding and trust remains blurry until she finds out how severe Iris’s visions actually are.

The film takes plenty of time building the character relationships and even giving us a few good scares, allowing the journey to the end of the film to be a genuinely anticipated experience.

Directed by Andrea Cazzaniga and written by Tatjana Scheel, CRACKS is a spooky tale that will leave you guessing until the very end.

A woman finds that a plastic surgery clinic has some nefarious methods.

Beginning with a woman going through pictures of lips, we can assume she is looking for a pair for herself. The camera cuts to her small, thin lips after she has chosen a much fuller pair, complete with a beauty mark.

The next scene is abrupt as we just see a scared woman running from a man. It is pretty quick, and if you look away you may even miss it. But then, this woman, Lily (Celine Verbeek) wakes up in a fancy and luxurious bed that’s also supposed to be a clinic.

She has a wrap placed around her mouth and a nurse comes in to let her know she’s had a fall and her lips didn’t make it. In a classic reveal, the bandage is removed to show that her lips are indeed no longer what she knew them as.

Ultimately, Lily gets her dose of revenge. She finds a way that’s impulsive yet relative and personal to her and her experience.

Directed and written by Nicole Tegelaar, LIPS is a beautifully filmed and colorful short, while maintaining a playful horror style.