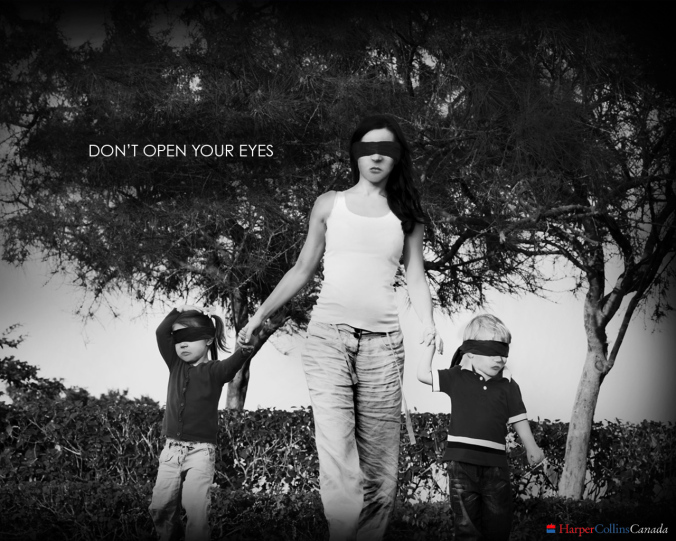 When I read the novel “Bird Box”, I couldn’t wait to sit down and write the review while it was still fresh in my head. It was such an amazing read that I stayed up all night reading it, unable to put it down.

The book is about an unknown entity that is causing people to become insane and suicidal. Each person who views the entity ends up killing whoever they are with and then killing themselves. The main character, Malorie, has spent the last four years of her life more or less stuck inside. She only leaves the house for food and water runs, always while wearing a blindfold.

There is a creature outside that causes insanity and suicide if a human sees it. I liked the fact that we don’t know any more about these things than Malorie does. 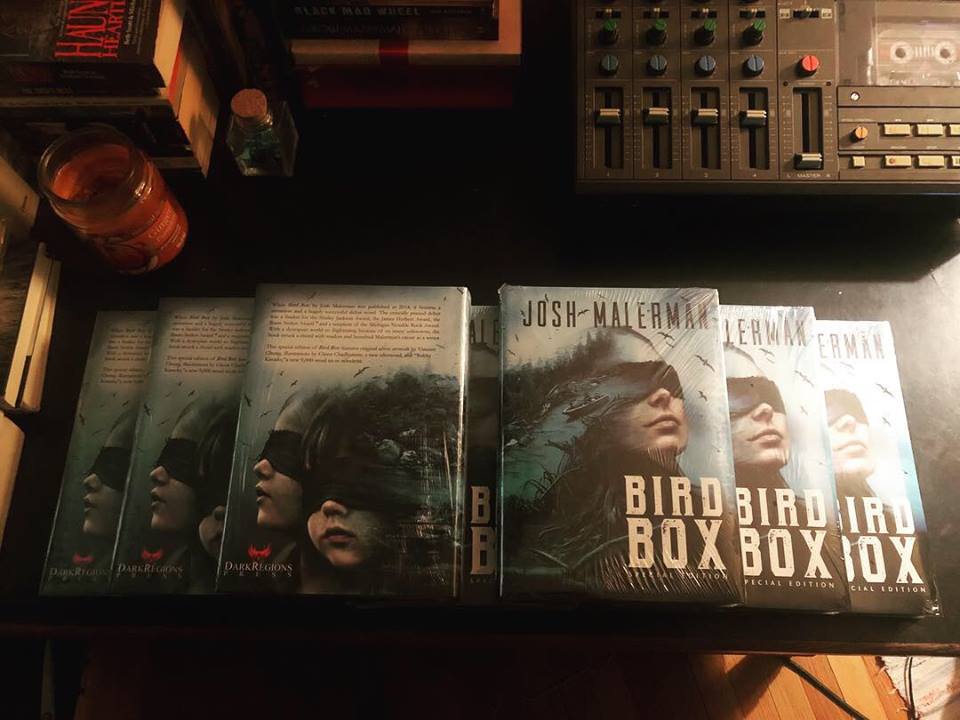 A big part of how much I enjoy a book is how easy it is to visualize what I’m reading. I don’t know if it was through the use of descriptive imagery, or the fact that the story took place in past and present times, but “Bird Box” definitely felt more like a movie. I could see everything that was happening absolutely clearly. It seemed that it would make for an amazing film, but since the characters spend so much of it blindfolded, I didn’t think it could be a movie.

At the beginning, we find out that Malorie is pregnant. I thought her pregnancy might become the dominant focus, or it would build up to a new plot. I was incredibly grateful and impressed that it didn’t become a driving force, but more of an afterthought. I kept wondering about the birth scene. When she finally gives birth, it is very far on in the book and does center around plot development. I think it was a good choice on the author’s part, since it avoided the obvious things that could have happened. 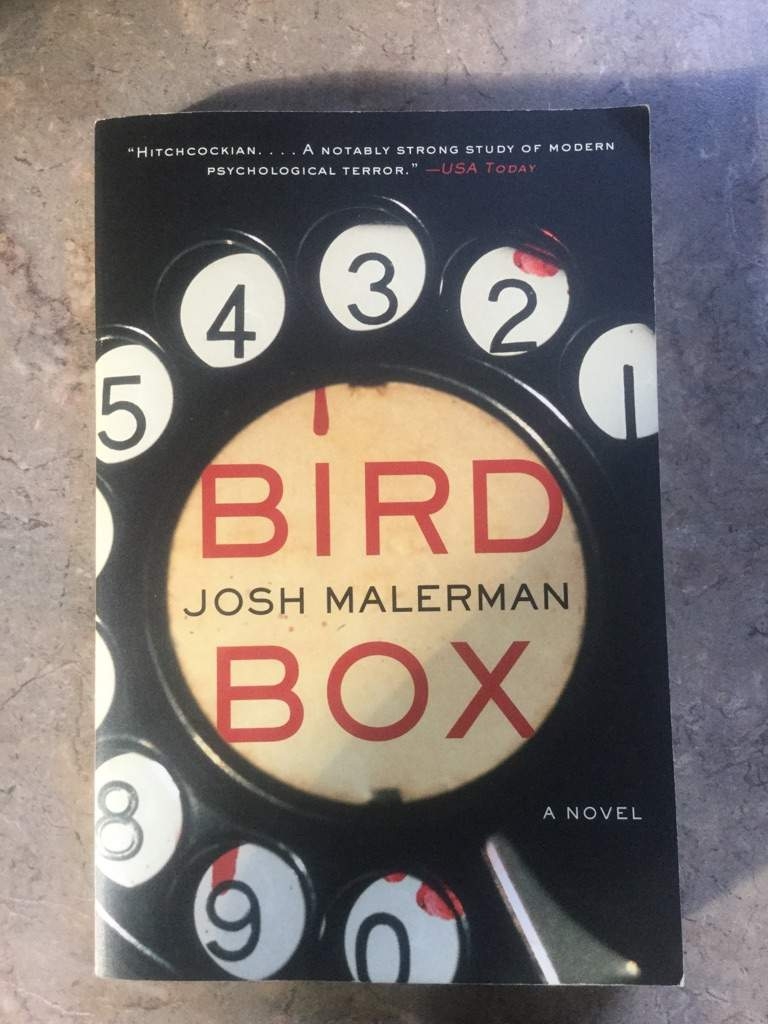 Since everything had been so weird up until this point, it wasn’t obvious where the plot would go after that. It could have changed to be about the children or something with trying to figure out what the creatures were. It didn’t give the impression of “now everything will be okay”. The focus of the plot remained on survival, but now involving training the children to have a heightened sense of hearing.

When the next big event occurs directly after she gives birth, it doesn’t seem like she’d been pregnant through the entire book just so we would care about how she turns out. The scene is more about how she managed to keep some shred of hope and now feels more motivated to stay alive.

It’s really well done, and the material is handled in a really smart and interesting way. “Bird Box” was such a compelling read that I couldn’t wait to check out the film on Netflix to see how well the film adaptation handled the excellent source material. 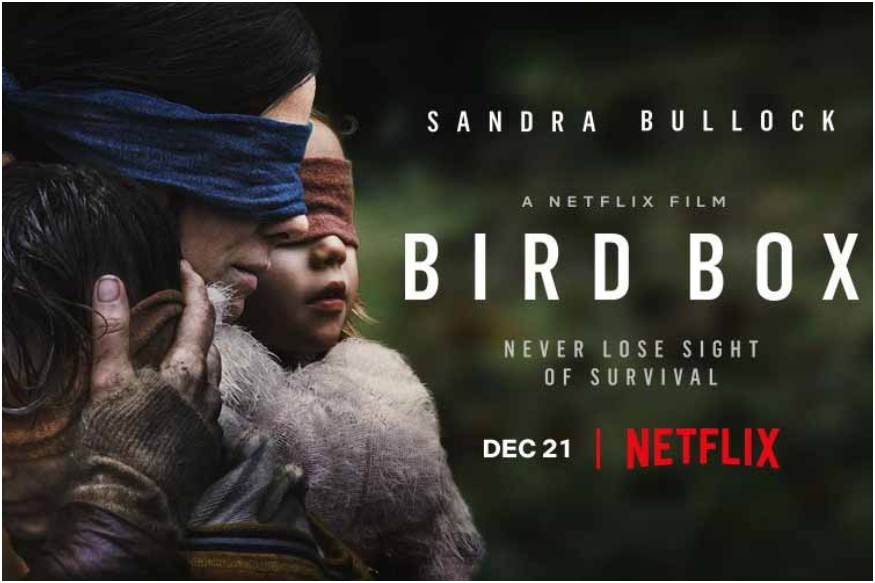 This movie was difficult to watch. The film version of Bird Box immediately becomes emotionally exhausting by opening with the main character talking to her children. The director filmed it to feel like she’s talking to the watcher. This sucks the audience in immediately, with no needed build up to the action. It does not seem necessary to introduce the characters and what is going on in their lives.

One thing Bird Box really did correctly was having the world spiral into chaos really quickly.

After the beginning scene, the movie soon shows us what is happening in the world in which these characters live. It transports us to a point five years in the past with news reports discussing the rash of unexplained suicides beginning in Russia and quickly spreading across Europe. We then follow Malorie (Sandra Bullock) and her older sister, Jessica (Sarah Paulson) as they head to the doctor for one of Malorie’s routine pregnancy checkups.

When leaving the hospital, Malorie sees a woman bashing her head into a glass panel. Everyone begins to panic, and chaos quickly erupts all over the city. Malorie and Jessica attempt to drive away from the violence, but Jessica witnesses the entity and immediately crashes the car. Suddenly, Malorie is alone in the middle of the chaos and must find a way to try to survive. She makes her way to a home where other survivors are holed up, and this serves as the catalyst for the remainder of the post-apocalyptic survival tale.

When I was reading the book, I didn’t think it could become a movie. Although I could visualize everything in my head, I didn’t think it would translate to film; the narrative comes from the blindfolded mother’s perspective. I felt that the film took this on without making it too dull or only focusing on that one fact. We still get to see the river that they’re going down and understand the pressure that everyone is feeling. 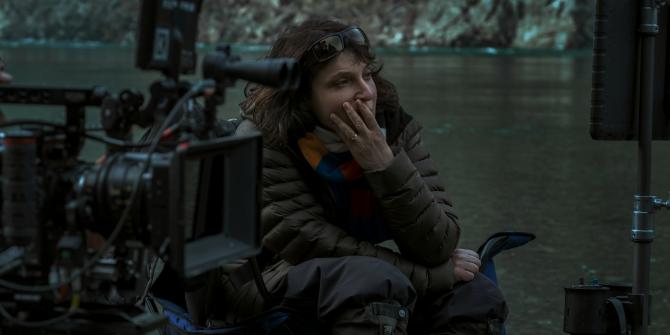 In terms of casting, I wasn’t sure about John Malkovich as the role of Douglas. I pictured the character as a sweet old man, not the hardened fighter in the film. I formed this idea on my own, but now see that Douglas’ personality was more that of a hardened, battle ready man. And it really worked.

All in all, I felt that this movie was a challenge to take on, but it was done successfully. The danger is present the entire time, the film is well cast, and the acting is all solid. Overall, it was an enjoyable viewing experience — a visually pleasing film that really captured the essence of the book.

Even if you haven’t read the book, I would highly recommend watching the movie Bird Box. And if you loved the film, I strongly urge you to check out the excellent book the film is based on.