Unconventional and uncompromising, Phil Stevens’ gore-soaked experimental horror film is a challenge to watch…and even more challenging to describe. 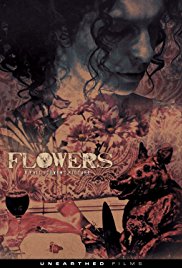 Searching for words that haven’t been said about Flowers would prove to be pointless, so I’m ending that approach before my piece is even started.  I refuse to call this a “review”.  It’s been reviewed enough.

In the movie’s commentary, Phil Stevens (the writer/producer/director) expresses disdain for the excessive use of words and over-analysis.  I will do my best to abide.

Preparation is suffocation, so open your eyes, look at the screen, and feel what you see:  Underneath a splintered wooden porch, old and paint-chipped, a damp womb of mud and human garbage.  Get acclimated with this world.  It’s what you’ll be suffocating in for the next 88 minutes.  Natural colors seem repressed, somehow drained out of the picture, out of despair more than anything else. 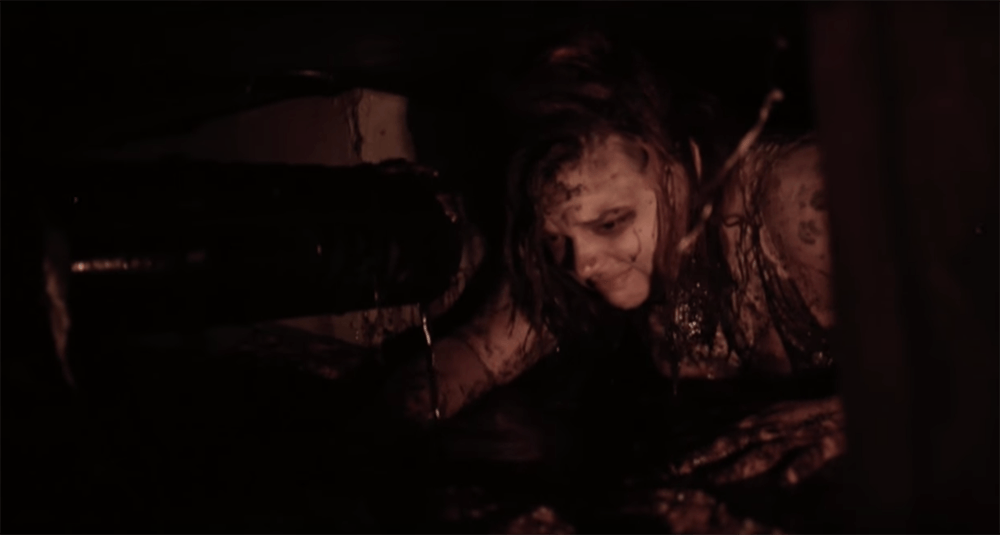 It looks like you’re looking through black-and-magenta-colored glasses, yet there is a pinch of something more.  The blood clots gagged on retain a slight shade of red.  Intestines and hand-pulled livers whisper in your eyes, the lightest of shades of bile and grey.  The scattered bone remains still have stains of the tan and pink flesh they were once tucked snugly into.

Bones and putrefying bodies are everywhere.  Cracked, moldy jawbones hang wide open.  But that doesn’t mean all of them died screaming.  Does it?  Once all the skin peels off, with nothing left to keep them shut, wouldn’t jawbones drop?  Broken everywhere, yet somehow you crawl through the black, diseased soil.  Dazed, pacing, crawling around in a crowded body-disposal tank that was once a bathtub.  You look for an old picture. 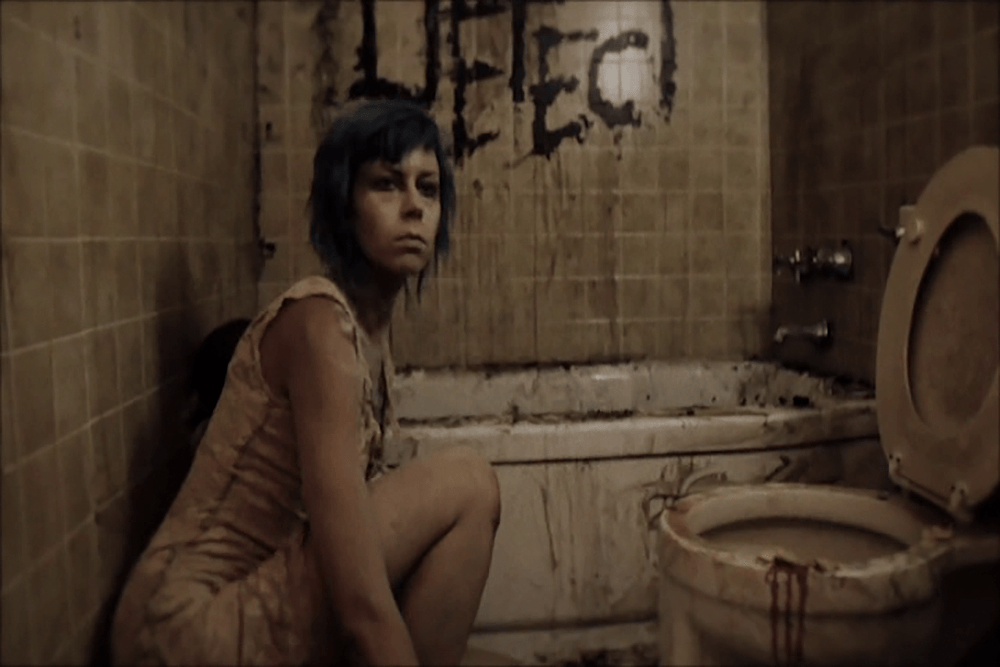 Is it the hope you cling to?  Are you still alive?  Can you be — sharing the same air with flies, well-fed on the pig’s head decaying in the sink?  No.  Black, muddy shit has swallowed your picture.

Give in to other sensations.  With eyes soaking up the rusty, urine-stained images, you are dry-mouthed, choking with starvation. You could sense a bent color spectrum of vomit, insect shit, and pig rot.  But the apples and the grapes that lavish the ripped sheet of plastic on the table are so beautiful.  You’re still getting the occasional clandestine sense of color.  Give in to the temptation!  The wine, the meat, and then suddenly that black, wormy mud.

Fucking disgusted, you rip open the suture on your chest and pull it all out of you.  This has to be the end.  Yet still the black and rusty grey tickle your eyes. 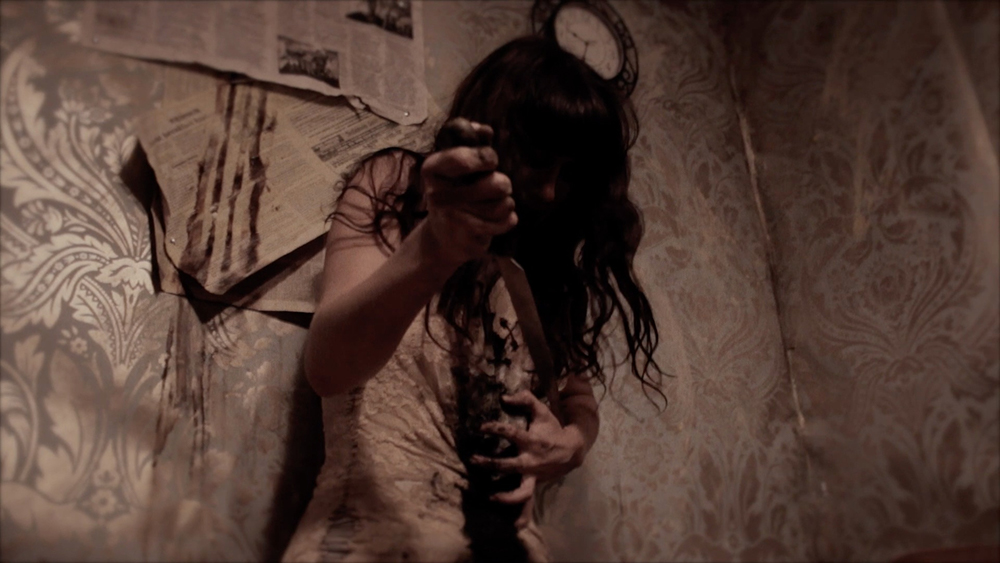 Looking at yourself in the mirror, crusty makeup on a little table, begging you to paint yourself.  Such a beautiful, elegant necklace. . . it hangs down the middle of your chest like. . . the black thread, the fucking stink, the dried puss and blood.  That’s not a necklace!  Destructive desires manifest inside you.  With bewildered determination, you rip into yourself, squeeze everything.  Then you see the sewing needle.

During this quiet barrage, a naked man sometimes appears.  He seems to be the truth.  He buzzes with clarity.  What you see him doing is really happening.  You dwell in the afterthoughts, a ghost world, trying to figure out the pain.  These images, like all the nausea and protracted crawling though this house of human sewage, continue moving and grinding along slowly against your eyes, as your heart is slowly crushed by balled-up sheets of sandpaper. 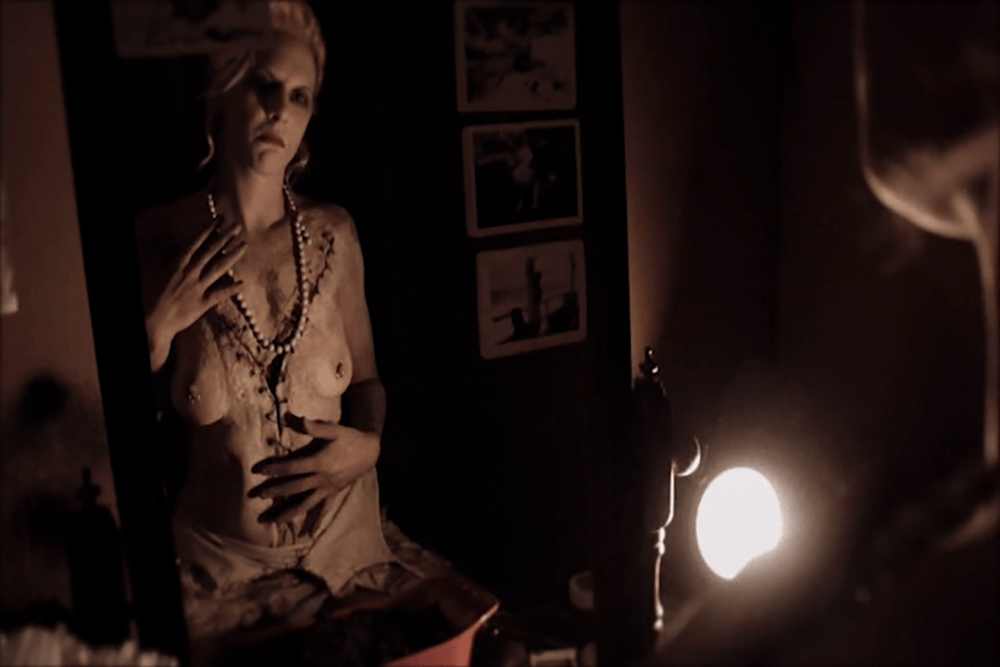 Were you a sweet, shining flower before you died?  Was there color in and around you?  Or were you just as sad in life, only to have living tortures replaced by dead ones?

Regretfully, I may have spoiled a few of the more grueling moments for you.  Yet Flowers is one constant flowing moment. 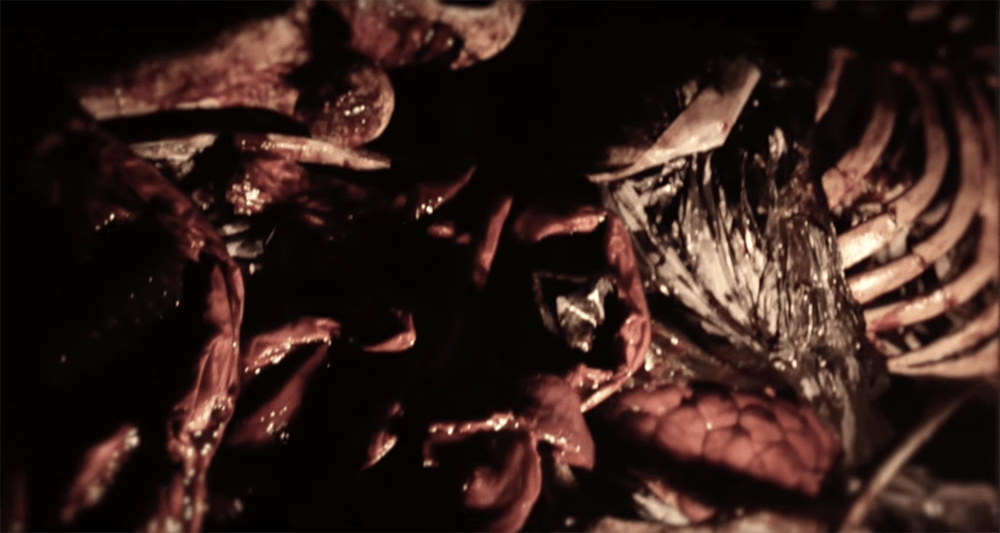 A challenge.  The greatest art is always a challenge: of the mind, the heart, or sometimes the digestive system.  It takes a true talent, and someone with absolute sincere faith in their own creativity to make a film like FLOWERS.

Filmmaker Phil Stevens says there is nothing to interpret in Flowers.  He isn’t “saying” anything.  It was just a collection of images burning inside him, and he HAD TO get them out.  To me, that is the essence of art.  He didn’t make Flowers for us.  He made it for himself. 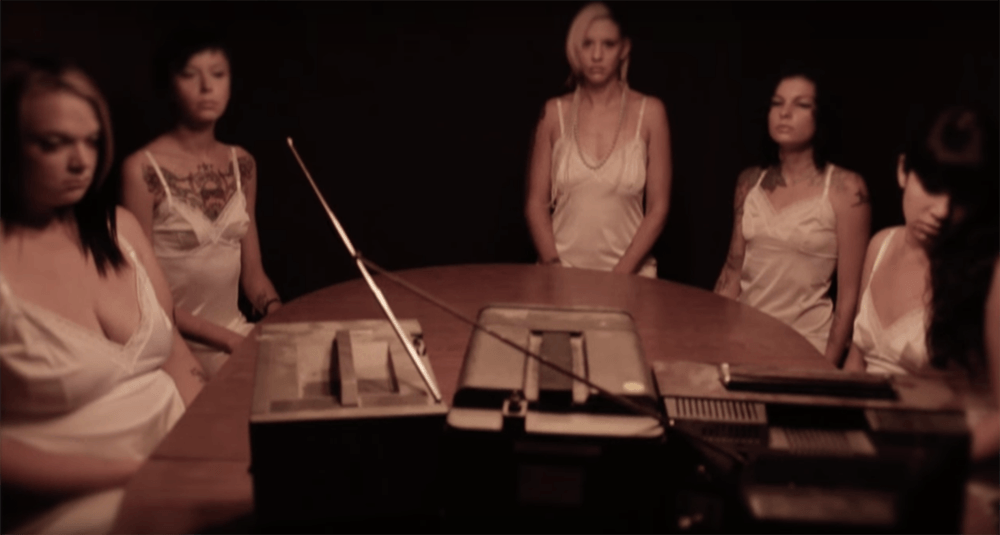