“Nightmare Cinema” from Masters of Horror creator Mick Garris is a stylish, disturbing, twisted and blood-soaked joy to watch. 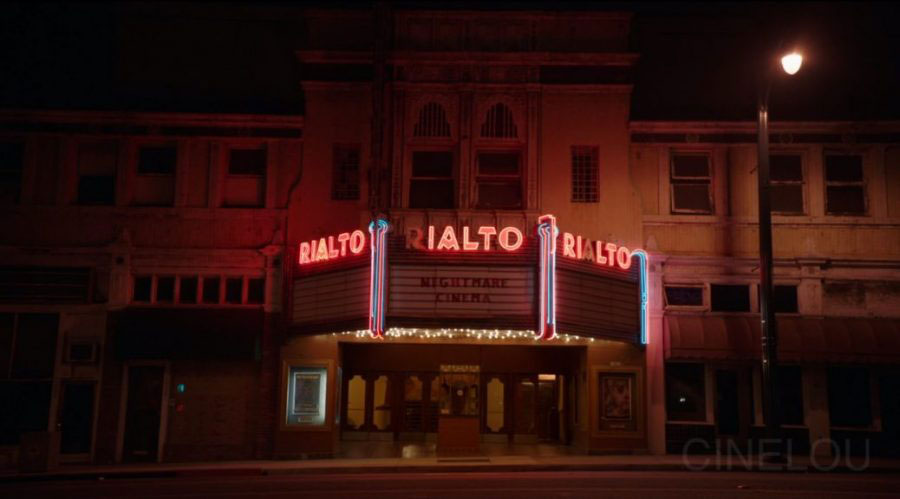 This feature horror anthology is filled with large doses of humor to balance out the very gruesome subject matter. A fan of everything dreadful, I loved it beyond belief. Featuring five amazing horror directors, impressive cinematography, incredibly well-done SFX and stellar acting, this film elevates the horror anthology to another level.

Mick Garris is a terrific horror writer/director and is well known for his ability to form collaborative teams of the greatest horror filmmakers alive. Mick is at it again, and with the help of an amazing group of horror masters, brings us the twisted and chilling, feature length anthology Nightmare Cinema.

The entertaining and gore-filled film harkens back to Creepshow and Garris’s own Masters of Horror and Fear Itself formats. I caught the film at the Portland Horror Film Festival where the audience cheered and showed their love. Nightmare Cinema is similar to Mick’s 2005-2007 Showtime series, Masters of Horror, but so much better.

Anthology films are hard to review. 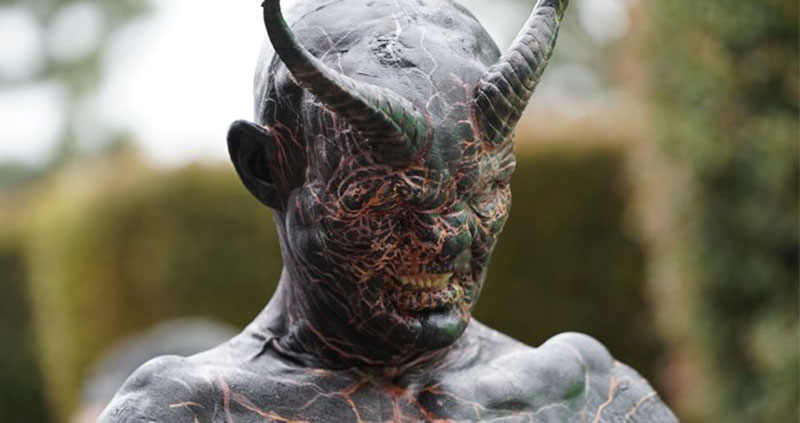 Some segments are stronger than others. But the goal is to produce a film that covers many genres within itself, making different types of horror fans happy. Directors of the individual shorts in anthologies tend to try new things. They don’t need a giant budget since they are only responsible for one segment.

I think Nightmare Cinema did an excellent job pulling these episodes together, managing the different paces, and matching the tone better than most anthologies ever accomplish.

The film is set in a cool location; the old Rialto Theater in LA, which is apparently a portal to hell. The film features five different characters walking into the theater, because how can they not, they see their name up on the marquee. Each person walks in, is forced into a seat, and gets the joy of watching the story of their own demise.

The wraparound story, brought to us by Mick Garris himself, is the common thread that ties the film together. 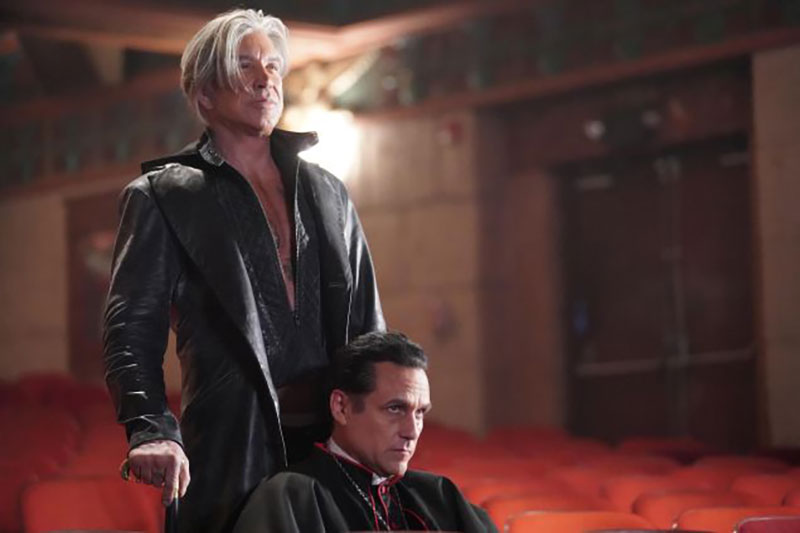 “The Projectionist” is the only other person in the theater. And this creepy guy, who we are to assume is the Grim Reaper, is none other than Mickey Rourke. When asked who he is, his answer is, “I’m The Projectionist, sweetie pie. I’m the curator of a hundred years of nightmares, trapped in a silver screen that never forgets.” It’s such a great line!

With his strange look and gravelly voice, Mickey is the ideal person for the role. Yet it’s a bit ironic, especially since when we first see him it’s after a segment on plastic surgery gone bad.

The film starts out fast and furious!

Episode one is titled “The Thing in the Woods” from Alejandro Brugués (Juan of the Dead). 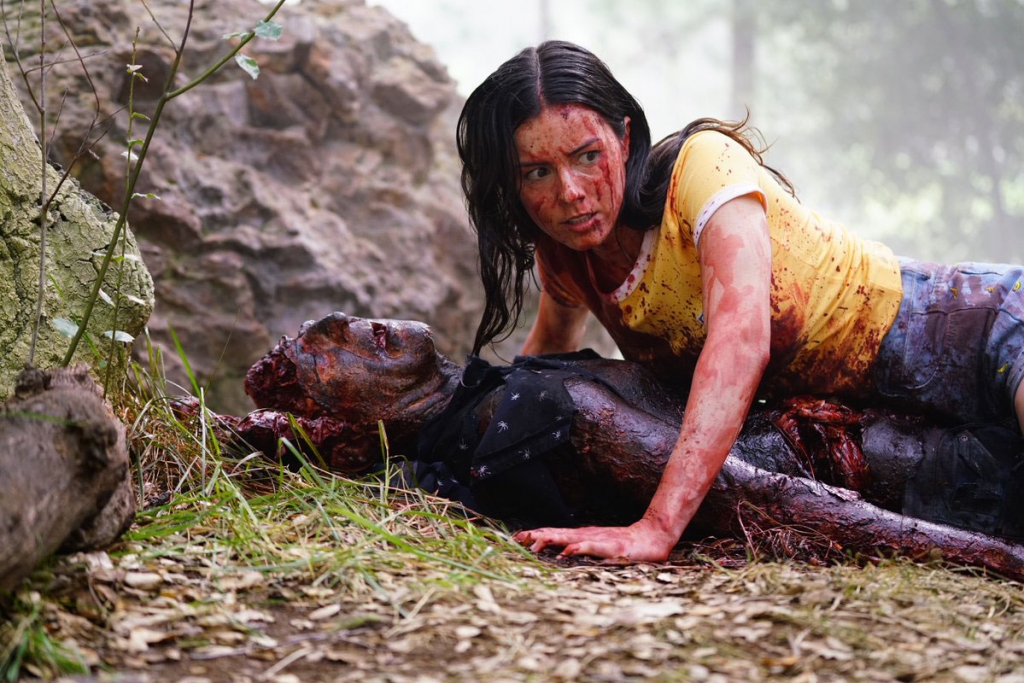 Brugués delivers a hilarious parody of the “Teens at a Cabin in the Woods with a Slasher” genre. This was one of my favorite segments. Because it has such a self-aware feel to it, you can’t help but smile throughout and then be blown away with the Sci-fi twist. Our Final Girl watches herself on the screen, running and screaming in equal amounts, to get away from the apparent bad guy: “The Welder.”

A wonderful and very strong start, this segment will be a favorite with slasher fans!

The second episode is “Mirari”, and this offering is from Joe Dante of Gremlins fame. 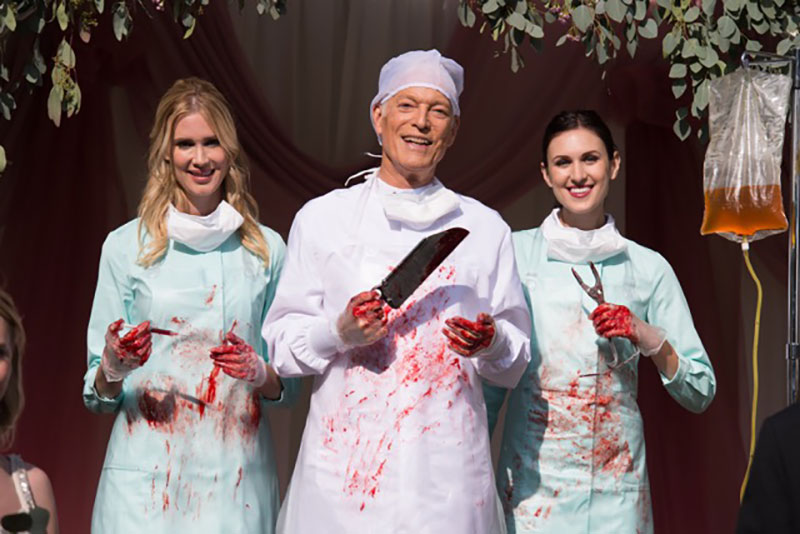 With a Twilight Zone feel, this ode to why we should avoid plastic surgery was another favorite of mine, and I was so excited to see the creepy Dr. Laneer was played by Richard Chamberlain (Dr. Kildair) who came out of retirement to do this role.

The story is about a bride-to-be who has a scar on her face, whose fiancé offers to pay for plastic surgery to fix the small flaw to her perfection. He promises that then she will feel beautiful and be as perfect as his mother. Even though this segment was a bit predictable, due to the similarity to the famous Twilight Zone episode, “Eye of the Beholder” it still managed to stand on its own because of the awesome SFX and ironic humor. When I saw who the mother of the groom was, I couldn’t help but laugh out loud! 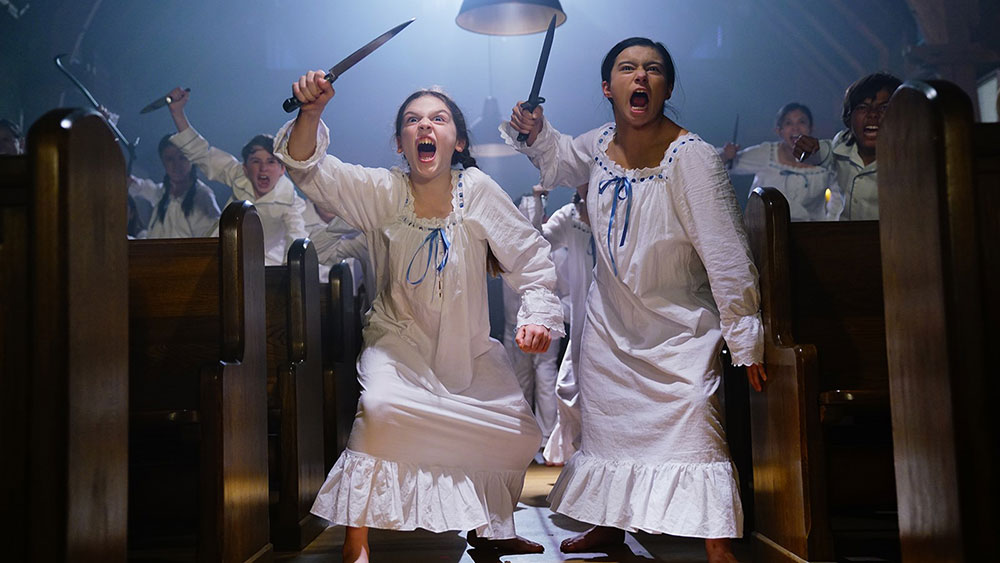 One of the most irreverent Catholic school possession offerings I have ever seen, Japanese cult director Ryuhei Kitamura (Versus) splashes the screen with blood, gore and children’s body parts, with an abandon that only made the audience laugh because they were uncomfortable. Sex and possession in the Catholic church is not my bag. But this grimly funny segment might work for fans of that horror trope.

I found this to be my least favorite in the film. But the rest of the film is so terrific, it didn’t take the film down for me.