Meet Duke, “the prettiest goddamn unicorn in the world” in the ridiculously fun and fantastically gory horror comedy CarousHELL 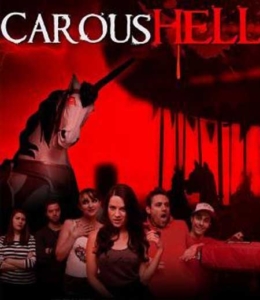 CarousHELL tells the story of Duke, a disgruntled carousel unicorn that has had enough of the theme park life when he is insulted and wronged by a young rider. Naturally, Duke vows revenge on the doomed kid and goes on a bloody killing spree to release his frustration. What follows is a ridiculous and absurd good time.

The characters are all entertainingly portrayed by the actors in a comically over-the-top way. They’re more like caricatures than characters, and the purpose they served was the best of both worlds: they had me laughing and rooting for their deaths at the same time. The two standouts are Se Marie as the endlessly full of herself Laurie and the ‘My Tiny Uni’ loving Preston played by Chris Proud. Writer and director Steve Rudzinski also has a funny role as Joe, a very pizza focused pizza delivery guy.

There’s plenty of blood on screen and more than just blood — the kills are very creative and entertaining.

One thing I love about the indie horror genre is the time and effort put into creative kills and practical effects. Maybe they do it to stand out, maybe it’s for a love of the genre, or maybe a combination of the two. Either way, the effects put forth by the film crew on CarousHELL are impressive and a ton of fun to watch. I also loved how Duke the unicorn remained an inanimate object as he moved. He would just glide and hop and kill as the stiff, plaster, wooden carousel unicorn that he was. It was funny seeing Duke move and navigate in this manner and hearing his voice come from his frozen face. It’s a lot like the turkey in Thankskilling.

Something I’ve noticed from the indie horror genre of today is the ability of filmmakers to perfectly merge the horror of the 1980s and the horror of the 1990s. The practical effects, outrageous story lines and cheesy dialogue of the 80s blends nicely with the polished, Abercrombie and Fitch like ensemble casts of the nineties. They mix nicely to create a nostalgic, self-deprecating good time.

CarousHELL is the kind of movie you can throw on late at night after a long day and just enjoy how ridiculous it is.

It’s entertaining, funny as hell, and even has a unicorn/girl sex scene for the Beauty and the Beast loving crowd. And when the end credits start to roll, do yourself a favor and stick around for a couple extra minutes. CarousHELL manages to top it’s ridiculous self and end on a high note. Hop on and give CarousHELL a ride. I know I’ll be giving it another go around soon.