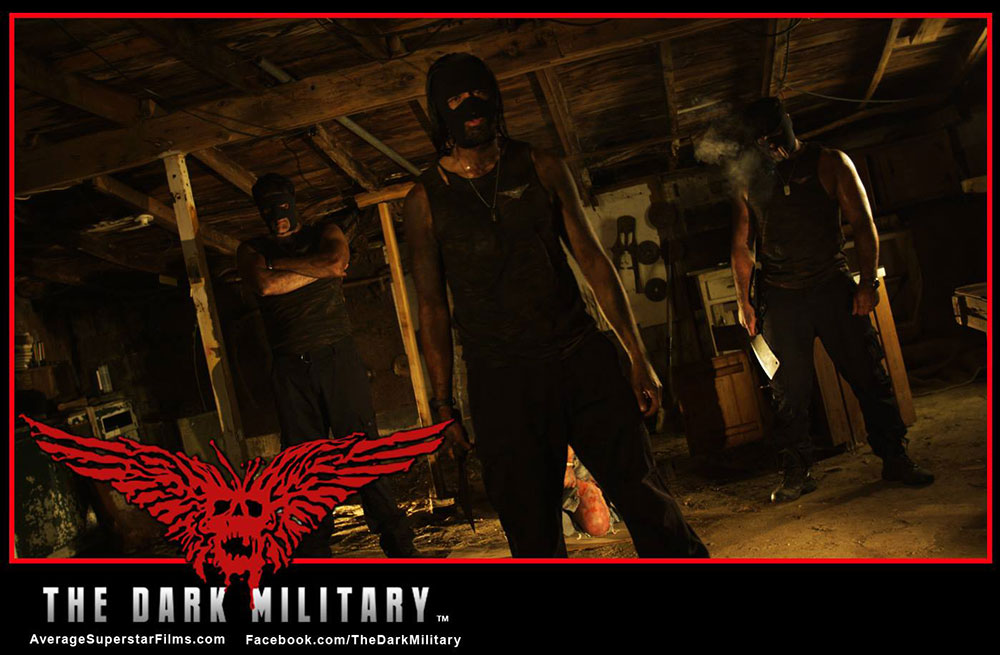 Has everything been done now? Are we at that point, as a genre? I would like to think the reason there are so many horror sequels and reboots is because people pay to see them, not because there are no more good ideas worthy of people spending their time and money on. Has everything been done?  n a genre based on the concepts of fear, pain, and death, can there possibly be no more new ideas? That seems ridiculous, especially since the imagination is limitless. Right?

Anyway, regardless of what answers any of those questions will provide, I will at least give The Dark Military credit for running with an idea that has been done before, but only a few times. And they bend it into an interesting new shape.

The Dark Military details the story of a squad of rage-riled backyard warriors who decide, and I quote, “Halloween needs an upgrade.” Why they think this, I’m not sure. 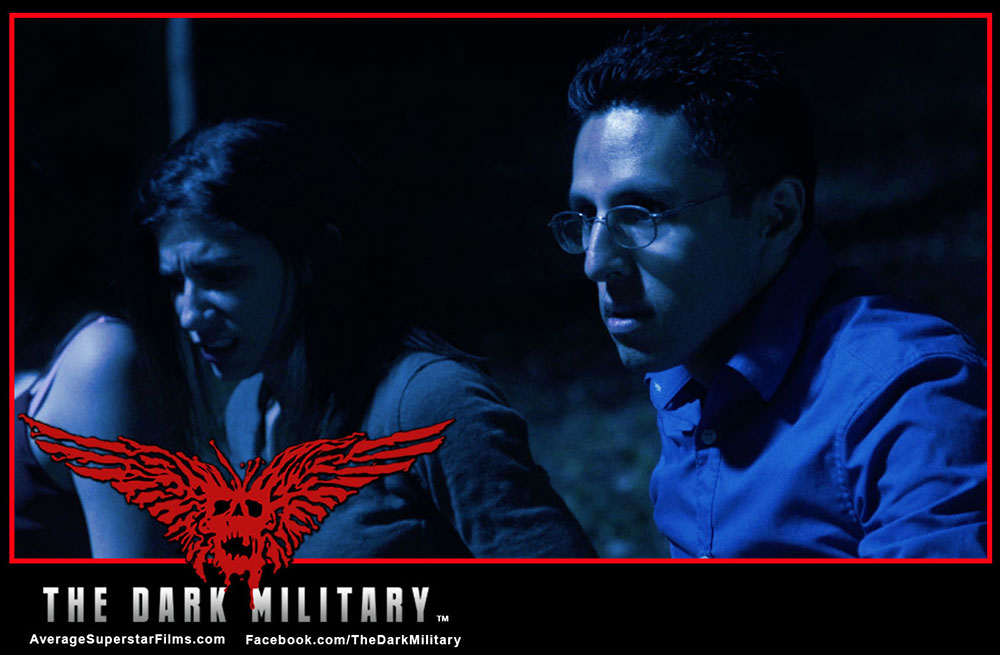 To accomplish this upgrading, The Dark Military hide some cameras in the woods, turn the area into a hunting ground, manage to take over the Dark Web, and broadcast a live Halloween slaughterthon. Trick a few dozen-or-so suckers looking to get famous/drunk/laid into meeting in the woods, then it’s hunting time!

As usual, I’m trying to entice with plot yet remain reasonably vague, because I hate spoilers, especially when I do the spoiling. 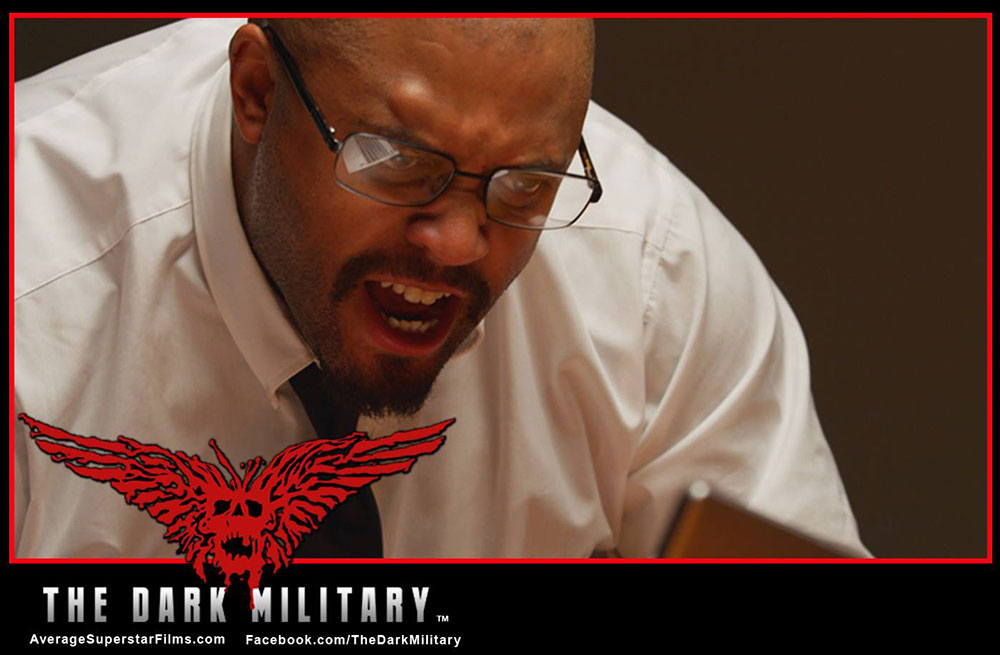 Comparing things to other things is kind of lazy, but in this case, let’s just say The Dark Military is a boozed-up smoothie of Versus, Halloween: Resurrection, and to a much lesser extent Rob Zombie’s 31 and The Hunger Games. But no, I didn’t sense much Battle Royale in there, which I honestly found very refreshing.

There is literally a busload of victims, and they are killed off constantly, pretty much throughout the entire running time of the film.

Nobody in the victim herd are very likable (except one, and she’s the . . . yeah), but there is a nice variety of flavors: jocks, goths, two crusty punks (fuck yeah), a few snotty hotties, a preppie or two, and the vague and nondescript ones that seem to have a lot of scenes and lines. Hmm, I wonder what that means? 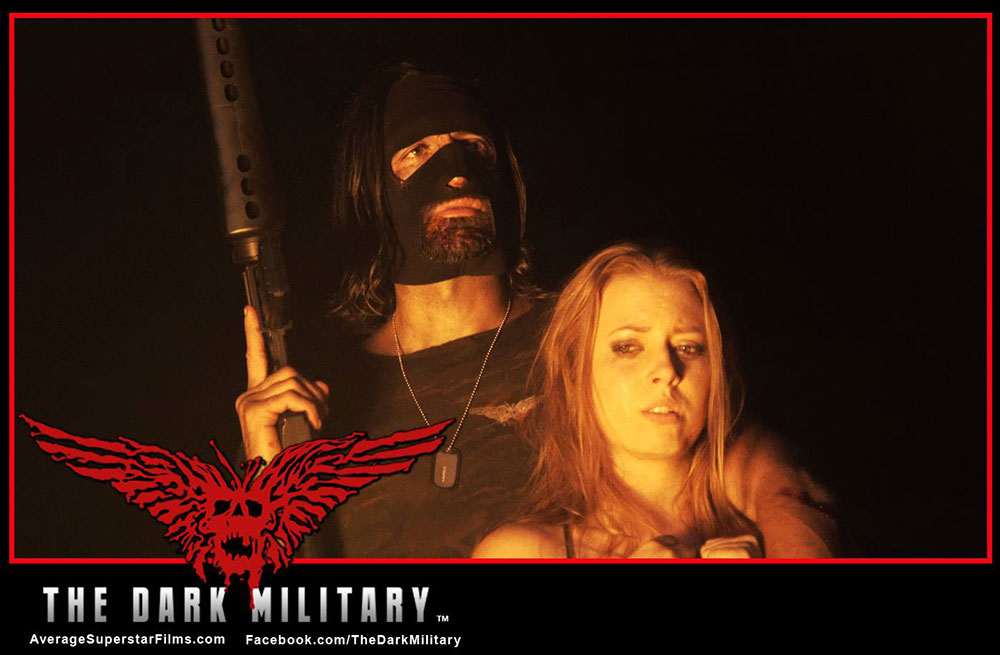 I thirst for the gore, and the screen was sufficiently sticky. THE DARK MILITARY gave good twisty guts and throaty cuts, but it seems these days that no matter how much I like, dislike, or feel “meh” about a movie, the one thing I want from all of them is more blood. Don’t hold back! Splash it, splatter it, throw it. When a throat gets sliced, let the killer bury their face in the cut and blow air bubbles. We are expected to be unrepentant monsters, so let’s be unrepentant monsters!

This is a decent movie. No creative revelations, but if you especially like your horror spiked with an action/survival vibe, give this a look. And best of all, there’s a Blue Meanie cameo!!!

The Dark Military is currently on the festival circuit, but you can keep up with the film’s developments and when/where you can catch it over at the film’s website: http://www.averagesuperstarfilms.com/untitled.