While it may be too long and slow moving for some, Demons is a solid exorcism film that has plenty of satisfying twists and turns to keep you guessing. 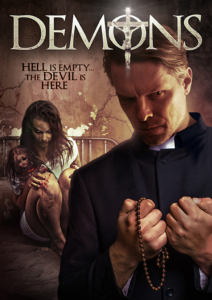 You know what I love? Horror movies set in the south. You know what else I love? Exorcism movies. Demons combines both southern horror and exorcisms into one wild and emotional ride that mostly manages to pull it all off with a bang.

Written, directed and starring Miles Doleac, Demons follows ex-priest Colin and his wife Kayleigh who met under extreme circumstances and are now, almost 10 years later, dealing with the trauma of it. Kayleigh’s family believed her young sister Jewel to be possessed and called upon Colin to exorcise the demon from her. But it all went horribly wrong.

Jumping between current day where Colin, Kayleigh and their four friends are gathering together for a wedding, and back to the time the two leads met, the film never ends up a confusing mess which is so common with this trope. It elegantly jumps from past to present letting us slowly understand the real circumstances of their meeting and what exactly is going on at this party.

Kayleigh is having flashbacks of the murder of her sister, and it’s a tangled mess that she does not want to unravel. The ghost of Jewel seems to be appearing everywhere she turns, and soon Colin can see her too. But with the help of her new friend Lara, and her patient yet troubled husband, Kayleigh is starting to understand what really went on in her childhood.

The flashbacks are beautifully filmed and colored, really feeding off of that dusty, southern vibe. There are long, lingering close-ups of faces allowing you to really sink into the emotional dialogue. The dialogue itself, especially in the present day, feels incredibly genuine and is one of the film’s stronger points. You can see that the script was given a lot of love and attention.

“Maybe even bad things, terrible things, happen for a reason.”

The acting is spot on for the most part. Andrew Divoff, who plays Jasper Grant, an incredibly religious Father and intimidating figure, offers one of the standout performances. Kristina Emerson played the clairvoyant Lara, and it was hard to take your eyes off of her — not because she spent the first half of the film naked in a swimming pool, but because she truly brought this character to life.

My only complaint would be the weird sexual chemistry that seemed to be forced on Lara and Kayleigh, played by Lindsay Anne Williams. It went nowhere, brought nothing to the story, and just sort of cemented the fact that these female characters were written by a dude. Women having a close bond can be shown without them gazing at each other’s bodies and drunkenly dancing while everyone watches.

Another downside to this film is that, while it blends southern horror and exorcisms really well, it does feel a little like two separate movies shoved together. The present would make a great ghost film all by itself. Whereas, the past scenes would make a great old school southern exorcist film — giving off The Last Exorcism vibes. While it all blended together seamlessly, it felt very long. I think focusing on either the past or the present would’ve made one hell of a great horror film.

The scares are present, there are some great classic jump scenes, the exorcism scenes feel very realistic and scary, and some of the scenes where Jewel appears are super spooky. There are also some trigger warnings for this film – there’s a quite brutal abuse scene shown between a father and daughter, and there’s some references to rape. If that’s not your jam, perhaps skip this film, as it definitely does not scare away from showing abuse. But to the filmakers’ credit, they handle it as well as they can.

“My daughter is not insane, she is infected.”

Storywise, it’s quite twisty and turny. After a solid opening scene that really sets the mood for the whole film, you think you’ve figured it all out. But as the story progresses and more secrets are revealed, you are taken for a pretty twisted ride. The final twist at the end is subtle and definitely leaves you with a sinking stomach. I had to sit there for a few minutes and think it all through, and I liked that. I perhaps could’ve done without that final “scare” though. It felt a little stuck on.

“I know your sister haunts you.”

Overall, Demons is an excellent film that brings something fresh to the exorcism genre. I can see it not being for everyone, as much of it is dialogue with only a few scares mixed in between. It’s that weird mix of slow burn, then a lot happening, and then back to slow burn again. Despite running a tad long (which speaks more to my personal preference really) and a few questionable character decisions, it’s definitely a solid film to start off this spooky horror movie season.

Demons will be distributed by Uncork’d Entertainment, available in theaters and VOD on October 6.