The Domicile is a classic ghost story with plenty of style, but not enough substance 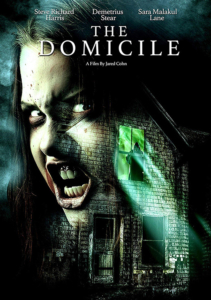 The Domicile (directed by Jared Cohn) is an old fashioned ghost story which revolves around a playwright called Russel (Steve Richard Harris) and his wife Estella (Katherine Flannery), who are expecting a baby.

The couple share their home with Estella’s mentally ill sister Samantha (Amanda Ruth Ritchie in a wonderfully creepy performance) – and it’s her who provides the truly scary moments in this below-par offering.

The first act sees heavily pregnant Estella take a life-ending fall down the stairs – but because there’s little to no chemistry between her and her husband, we don’t really share in his grief at the tragic accident. We’re also introduced to Russel’s dude-bro David (Demetrius Stear), who’s anything but a positive influence in his friends life. Right from the off, I was wondering what actual benefits there were for Russel to have this guy as his co-writer. He seemed to be more of a buddy than a helpful confidante — and an intensely annoying one at that.

Samantha’s nurse also makes it very clear that she can’t cope with her responsibilities any longer, and that she’s looking for a new job. All of this causes Russel a great deal of stress.

Cut to one year after the horrible incident, and Russel is now, understandably, in a bad place mentally. He’s struggling to write anything good, but is encouraged by both David and his agent to continue writing. His best work, apparently, comes to him while drunk – so he spirals into alcoholism, and takes on board the dubious advice of his friend to “get back out there” with women.

Estella’s ghost, however, isn’t so happy about the idea, and starts to appear randomly — making Russel wonder if he’s going insane, or if it’s just the drinking.

As Russel contacts his former mistress Lucy (Sara Malakul Lane) and convinces her to meet him again, I was firmly in the Estella camp thinking that this was a despicable thing to do, especially when he invites her into the home he shared with his heavily pregnant wife. But that probably says more about my morals than the film!

Needless to say, Estella’s presence and influence increases from this point. And after even more dubious opinions espoused by David, things get really bad for Russel, culminating in Estella’s ghost possessing Lucy’s body to get her revenge.

The Domicile looks beautiful. Most of it is set inside the said domicile, and it’s interestingly lit and shot. But the essence of the film lacks substance. The script and dialogue hamper what is, at essence, a simple story which could be told more effectively. The character of Samantha isn’t explored in enough depth to give menace or meaning to her wildly creepy portrayal of someone with mental illness and could have been used more effectively.

The climax of the film works well, and you’re given several good scares throughout, but the overall lack of chemistry means you can never really engage with the characters or their plight.

The Domicile is worth a watch, but not if you’re looking for something that will leave a lasting impression.