The Ax Wound Film Festival shines a light on women in horror, while Mixtape Vol 1 showcases some great horror shorts by the genre’s best female talent

The Ax Wound Film Festival, presented by Women In Horror Month, is preparing for its third annual festival celebrating women in horror — and Morbidly Beautiful is honored to be one of the event sponsors.

As a promotional tool, and a way to raise funds to keep the festival going, Ax Wound has released a VHS of recent horror shorts that played at the two previous festivals. Ax Wound Film Festival Mixtape Volume One is a collection of ten horror shorts, all directed by women and hosted by Kaci “Homicidal Homemaker” Hansen. 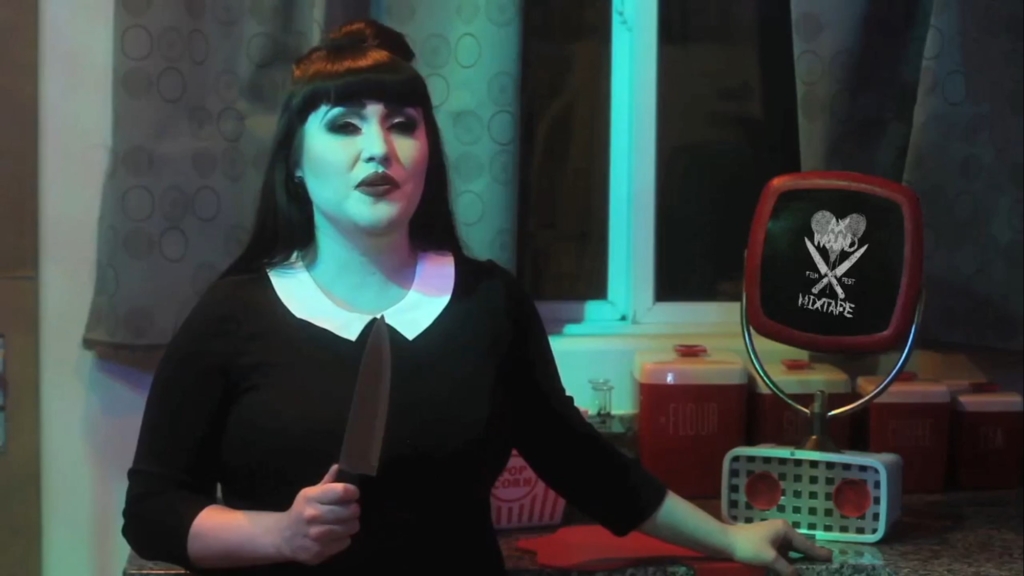 The spotlight on women creators proves that horror thrives on and needs the voices of women in the genre.  While I love the Soska Sisters and believe they are wonderful ambassadors for women in horror, the conversation needs to expand beyond the Soskas. When a horror franchise is opened for a director to move in, we can no longer afford to fall back on the Soskas as the go-to female directors. As fans of horror, we must demand opportunities for other talented women to showcase themselves.  It’s time to open up the field and demand that producers allow their voices, as yet unheard, to be heard, and that we fans will stand with women creators.

In that vein, the Ax Wound Film Festival Mixtape Volume One gives fans a look at a handful of talented women.  It’s up to us to spread the word, help get their names known and acknowledge that horror is better with women, like these creators, influencing the genre. 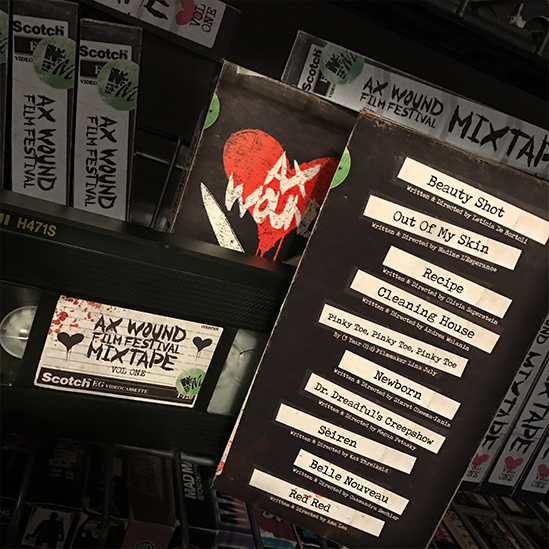 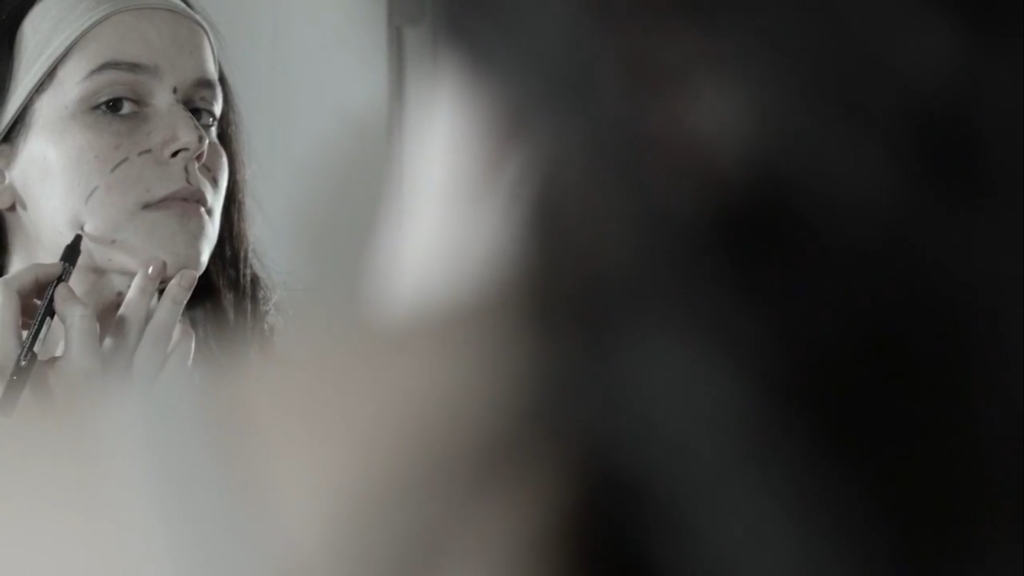 In this story, Rebecca is an attractive woman who is unhappy with her appearance. She peers into a mirror pulling at the skin at her face, twisting it, trying to find some beauty in what she views as ugliness. On her television, a commercial plays advertising a beauty tool kit that allows a person to redesign their own face with the tools in the kit. Mostly dialogue free, BEAUTY SHOT is a critique on society’s value on looks and the businesses that prey on people’s worst fears for money. A truly horrifying segment opens this collection as Rebecca discovers that beauty is more than skin deep. As the credits roll,  an actual plastic surgery procedure is shown, at an escalated speed, which is incredibly uncomfortable to watch.

2. OUT OF MY SKIN (Nadine L’Esperance) 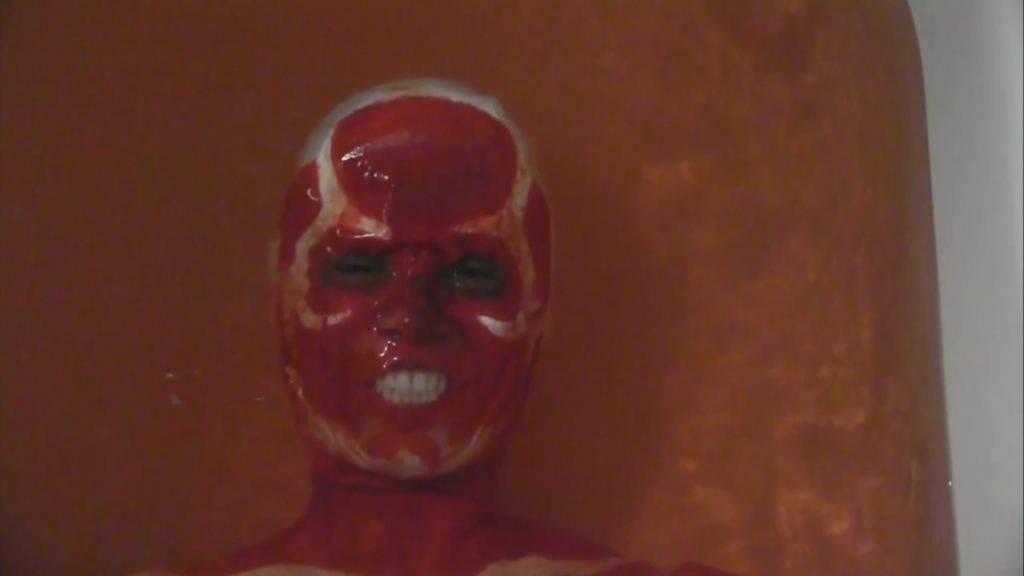 The story is dialogue free, but not any less impactful for the lack of dialogue. Mom’s daily life is a tedious drudgery of taking care of kids, cooking for the husband, and cleaning the house — it’s enough to make mom want to crawl out of her skin!  When the pressure gets too much, who doesn’t feel like sitting back with wine and peeling off the drudgery of the day?  Anyone who is a homemaker can relate to OUT OF MY SKIN, and HELLRAISER fans will enjoy the gruesome makeup effects used in this short. While very brief, OUT OF MY SKIN is very effective and one of the high points of the tape. The third short, RECIPE, is one of my favorites of the collection. Saperstein gives an entirely new meaning to the definition of “raw diet.”  Not for the faint of heart, RECIPE is a tremendous story on the desire to find ways to stay fit and healthy. It is also a warning that you may want to steer clear of recipes involving nuts. 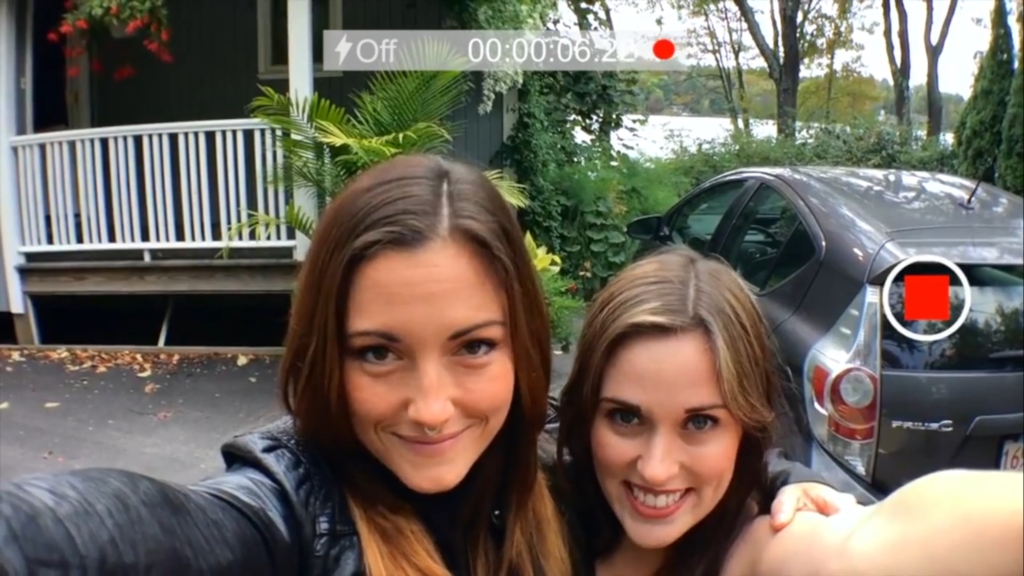 The next short on the tape is the partial first person POV or “found footage” style movie CLEANING HOUSE.  Two women film their “house cleaning adventure” on their smartphone. Most of the movie is shown in this phone camera POV until the end when it switches to the more traditional audience view. While I’m not a fan of the found footage/first person POV type of film, CLEANING HOUSE is more effective in the phone camera vantage point, and it made me wish that Wolanin had kept that vantage point throughout the entire short. That one nitpick aside, CLEANING HOUSE is a nice twist on the home invasion sub-genre, and the characters of Claude and Chuck are perfectly cast in their role as the adventurous house cleaners.