Perhaps no movie has made the journey from critical and commercial flop to misunderstood cult classic quite as quickly as “The Empty Man”.

Based very loosely on the graphic novel by Cullen Bunn, David Prior’s The Empty Man was poorly received in test screenings, causing the studio, 20th Century Fox, to lose confidence in it, eventually dumping it in theaters in October 2020 with little marketing or promotion — all but dooming it to an early cinematic death.

But then, unlike most cinematic flops, a curious thing happened.

The film began getting some strong word of mouth, slowly finding an audience through on-demand and streaming that had largely ignored its theatrical run (the fact that it came out in the middle of a pandemic probably didn’t help in this respect).

Many critics labeled it a new cult classic, reframing its apparent weaknesses as strengths.

James Lasombra (James Badge Dale) is an ex-cop haunted by a tragic loss, halfheartedly running a home security business and drinking in his off time. He’s pulled back into his old ways when a group of local teens including his friend’s daughter Amanda (Sasha Frolova sporting a serious Beatlesque bowl cut) goes missing, the only clues a flier for something called “The Pontifex Institute” and the words “The Empty Man made me do it” scrawled in blood on the mirror.

Since the local cops don’t seem to be too concerned with solving the case, James offers to try to get to the bottom of it, taking him down a dark path as he uncovers just what those kids were up to.

So is The Empty Man a misunderstood gem, or did it deserve the critical shunting it originally received? 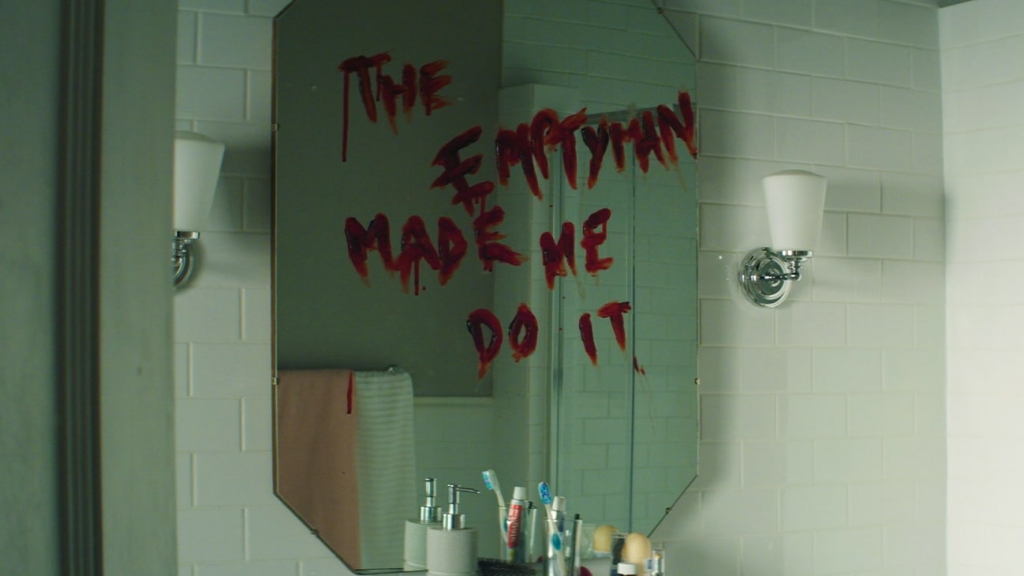 In my opinion, it’s a little bit of both, mostly in the former camp.

The film utilizes some familiar tropes — the ex-cop with the tragic past, a teenage boogeyman, a secret cultlike society — but remixes them to tell a truly wild story that doesn’t always go in the directions you might expect. The trailer also does the movie no favors, focusing on the teen boogeyman angle which is only a part of the story.

It’s a bit overstuffed, but there’s plenty of moments that are undeniably powerful, even if they don’t all hang together perfectly.

For starters, there’s the masterfully creepy Bhutan-set prologue that both ties into the larger story and also acts as a terrific horror movie in miniature.

Prior clearly has skill directing actors; Dale gives an excellent performance as Lasombra, registering his pain in subtle ways. Ireland is also great as Amanda’s grief-stricken mother Nora, and the terrific Stephen Root makes the most of a small role as a charismatic cult leader.

Prior is excellent at creating a mood of sustained dread that carries throughout the whole film, as Lasombra is pulled deeper into this strange world.

It’s always fun when a film takes you in directions you didn’t expect to go, and while this may have irritated the few moviegoers who did brave the pandemic to see it in the theater, the plot’s strange detours and digressions make it one of the more unconventional and ambitious horror movies to come out in a while.

Overall Rating (Out of 5 Butterflies)
MORBID MINI
Once dead in the water, this is a film that found new life on streaming and went from getting unceremoniously dumped to being swooned over by critics. Time will tell whether The Empty Man has the staying power of a true cult hit, but I can’t think of too many other movies that have experienced this kind of reappraisal in such a short time. Whether it’s worthy of its newfound critical celebration may be a matter of personal opinion. But there’s enough filmmaking prowess on display to make me hopeful that the film’s success, however belated, means we can soon experience more of Prior’s uniquely frightening visions.