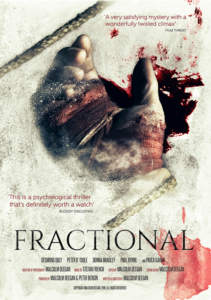 We were contacted by filmmaker Michael Deegan, the writer, Director, Editor and Cinematographer of the Irish psychological thriller FRACTIONAL. This is the first feature film from Deegan, and it has been receiving a great deal of positive buzz in the horror community.

The film opens as a man, who we later learn is psychiatrist John Hackett (Desmond Daly), wakes up alone in an abandoned warehouse. He’s tied to a chair with duct tape covering his mouth. As he glances around the room, he notices a weapons table next to him — a variety of knives and scalpels, a hammer, a buzz saw — suggesting his captor has very dark and dangerous plans for him. 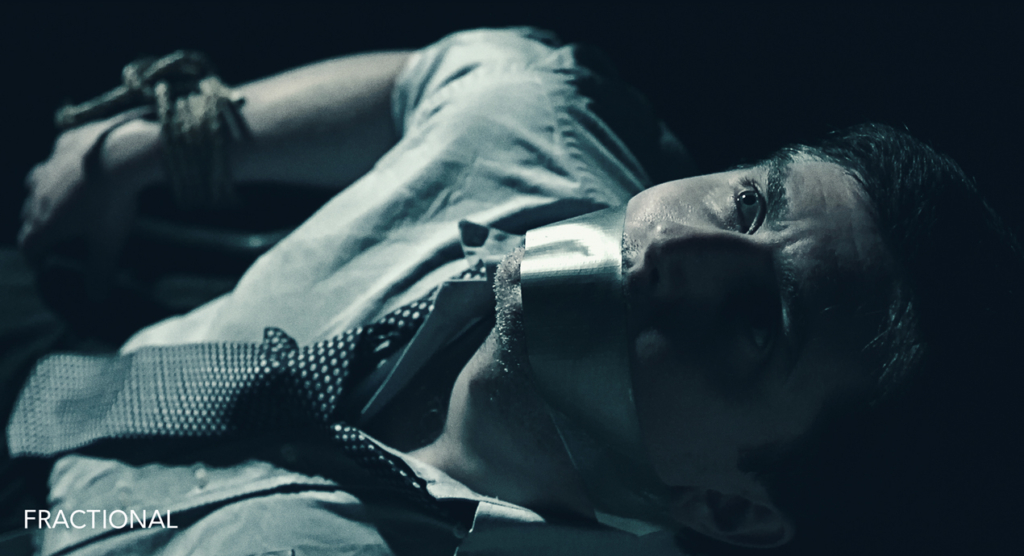 The first several minutes are Daly alone in the room, consumed by fear as he tries desperately to escape his predicament. During these opening minutes, Deegan does an exceptional job creating mood and atmosphere, building up tension as we as viewers struggle (along with our protagonist) to figure out what’s going on and how this nightmare will unfold.

Suddenly, a menacing man saunters in brandishing a pair of bloody shears. We soon learn his name is David Crowe (Peter O’Toole), a former patient of Hackett’s with an axe to grind against the good doctor for shipping him off to an insane asylum. David toys with John a bit before revealing his master plan. He wants John to confess the sins of his past and reveal a truth he’s desperately trying to keep hidden. David makes it clear that lack of cooperation will result in severe and painful punishment. 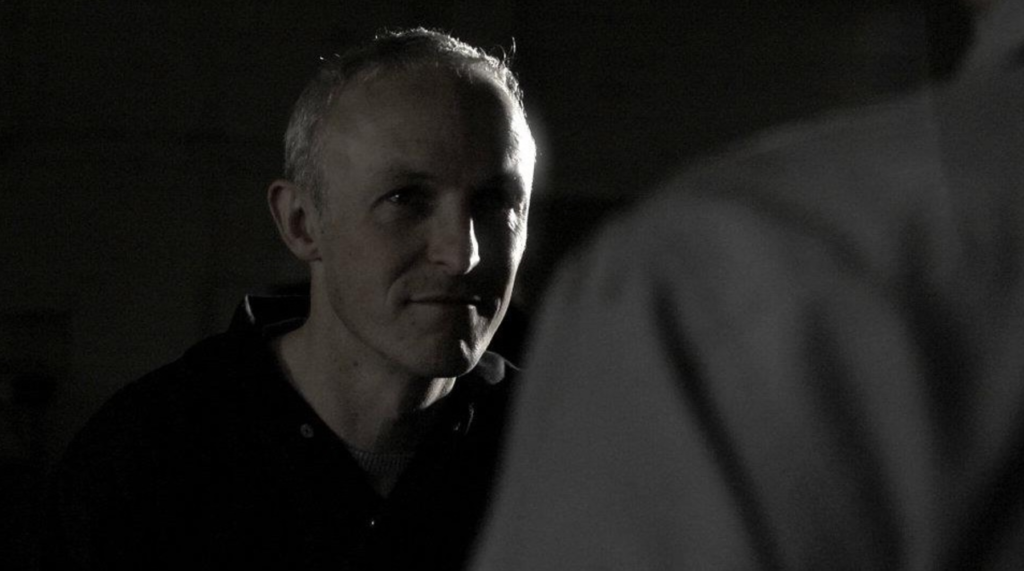 From there, the story begins to unfold as pieces of the puzzle are slowly revealed, in part through flashbacks to David’s past, building up to a climactic and satisfying conclusion. 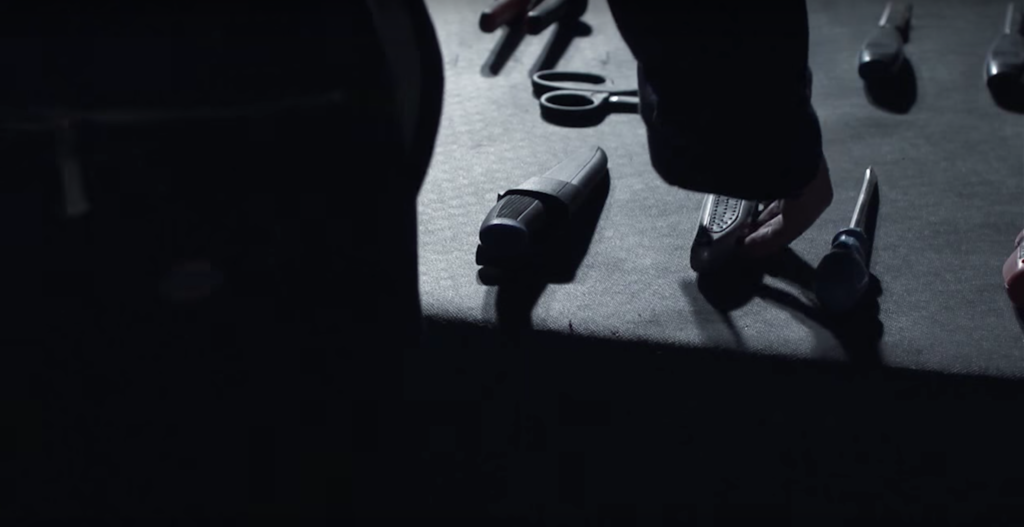 Daly and O’Toole deliver brilliant performances, and Deegan weaves an intriguing mystery that begs to be unraveled by the viewer.

Daly spends the entire film tied to a chair, save a few flashback scenes, but he still manages to exhibit remarkable range. He communicates a great deal, often without saying a word, creating a multi-dimensional character that we feel both sympathy and disgust for. We feel for his predicament, even as truths begin to be revealed that make us question his ethics.

Likewise, O’Toole is tremendous as the mentally unstable antagonist. He’s scary and unsettling, but still human and strangely sympathetic as well. His performance reminded me of Anthony Hopkins in Silence of the Lambs with his almost poetically dramatic monologues and the way he straddles the line between deranged psychopath and sensitive artist; at once utterly brilliant and yet completely unhinged. There are also echoes of Tobin Bell’s Jigsaw in the SAW franchise — a man on a mission to make others own up to their past and make amends for their transgressions. 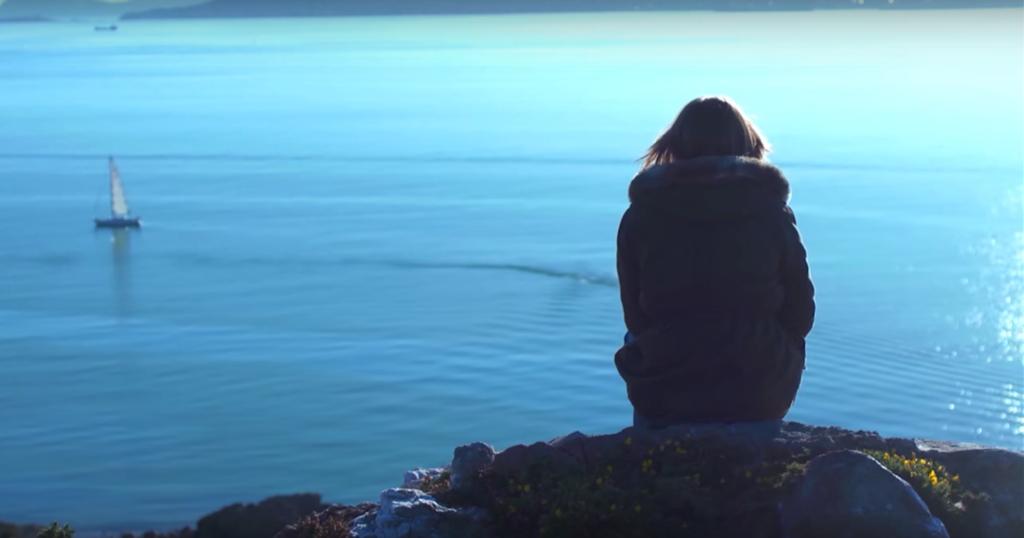 If you’re into torture films and hardcore horror, you’ll probably want to skip this one. FRACTIONAL is a film for viewers who like to be challenged by their horror, who enjoy a good slow burning mystery, and who prefer smart writing and exceptional acting to fast-paced gore and in-your-face scares. If that’s your cup of tea, this film delivers in spades.

It does feel a bit long in parts, primarily due to its mostly single location setting and dialogue-driven story development. It did, however, manage to hold my interest, as I was fully invested in how the well-crafted mystery would unfold. I also really enjoyed the flashback scenes that served as both a respite from the gloomy central setting as well as way to reveal more clues in the story. Some of these scenes were exceptionally well done and among the most disturbing and truly horrific of the entire film. 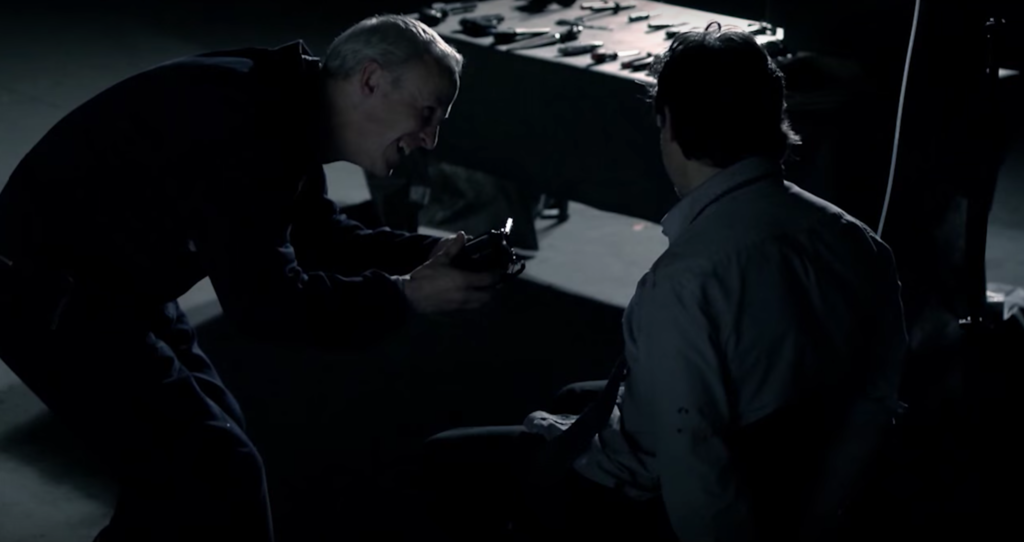 One word of caution: Do not expect to have everything neatly wrapped up with a pretty bow at the end of this film. FRACTIONAL is one of those movies that asks just as many questions as it answers, and it demands its viewers to engage both emotionally and cerebrally. It’s what we call a thinking man’s horror film. At its best, it’s clever and refreshingly unpredictable. At its worst, it’s frustrating and potentially unsatisfying.

This is not a fun watch. It’s dark and disturbing, and it’s one of those movies that leaves you feeling the effects long after the final scene. But it’s unique and memorable, bringing something fresh and interesting to the genre. Even if you don’t love this film, I would think it would be difficult to not to at least appreciate the artistry and technical skill on display here. I’d be surprised if Malcom Deegan wasn’t poised for a very promising future in the genre.

Fractional is currently available to watch on Amazon.com free for Prime members, as well as numerous other streaming platforms.