“IT” Can’t Get Much Better (Reel Review)

27 years later and, right on schedule, IT returns. Does the new version sink in the Derry sewers or does it float to the top of horror greatness? 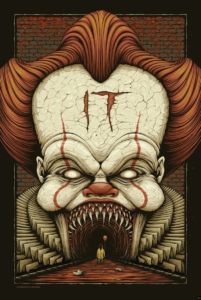 When Stephen King released his 1986 novel IT, little did any of us know the impact that 1,000+ page tome would have on us. The book is one of the most popular of all his novels and has become something of a rite of passage for young readers who are looking to understand the relevance of Stephen King — not just to horror but to Literature as a whole.

Point blank, this is King’s most most beloved story. More so than CARRIE, THE STAND, THE SHINING or even THE DARK TOWER, there is something special about this book that touched a nerve with people.

So it would come as no surprise that a film adaptation was coming, only it would follow the lead of King’s other book ‘SALEM’S LOT and become a TV miniseries on ABC. IT drew in 30 million viewers over the 2 nights it aired. Audiences were captivated, hypnotized and genuinely scared by Tim Curry’s electrifying performance as the villainous clown Pennywise. 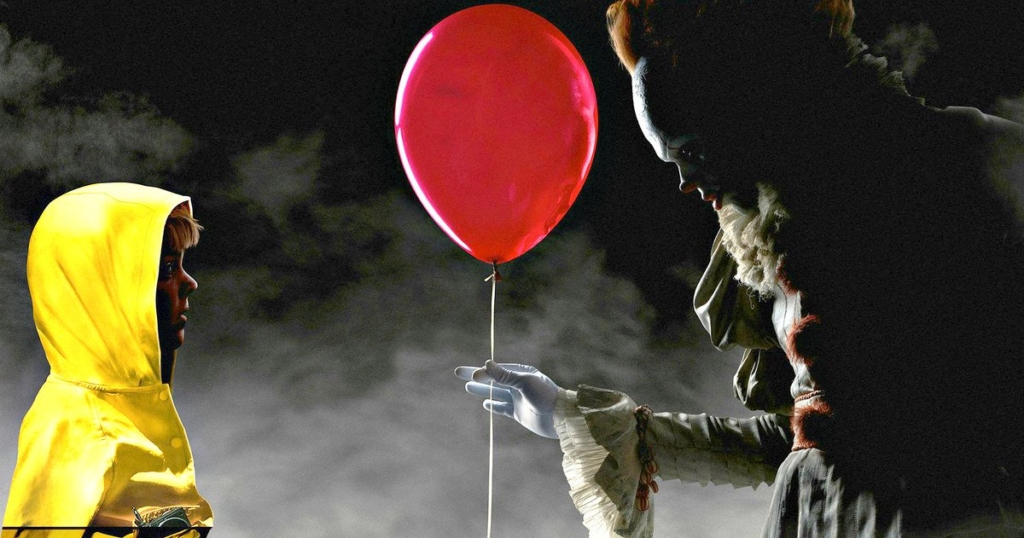 While the miniseries has gone on to be a cult classic, the 2nd half has not aged well unfortunately. In fact, the final showdown with IT is even more laughable now then you probably care to remember. While it did touch on a few cornerstones of the novel, ABC’s adaptation was missing some key elements that were almost impossible to showcase on broadcast. King and horror die hard fans always pondered what would happen if we got a proper feature film showing the darker, vulgar, gorier parts of the book.

I can wholeheartedly tell you, IT is not only the BEST Stephen King horror and one of the best film adaptations (Stand By Me, The Green Mile, and The Shawshank Redemption are among the best of the King adaptations overall), but this is the best horror film of the past 10 years. This will easily be in the conversations of greatest of all time in the future…IT is that wonderful! 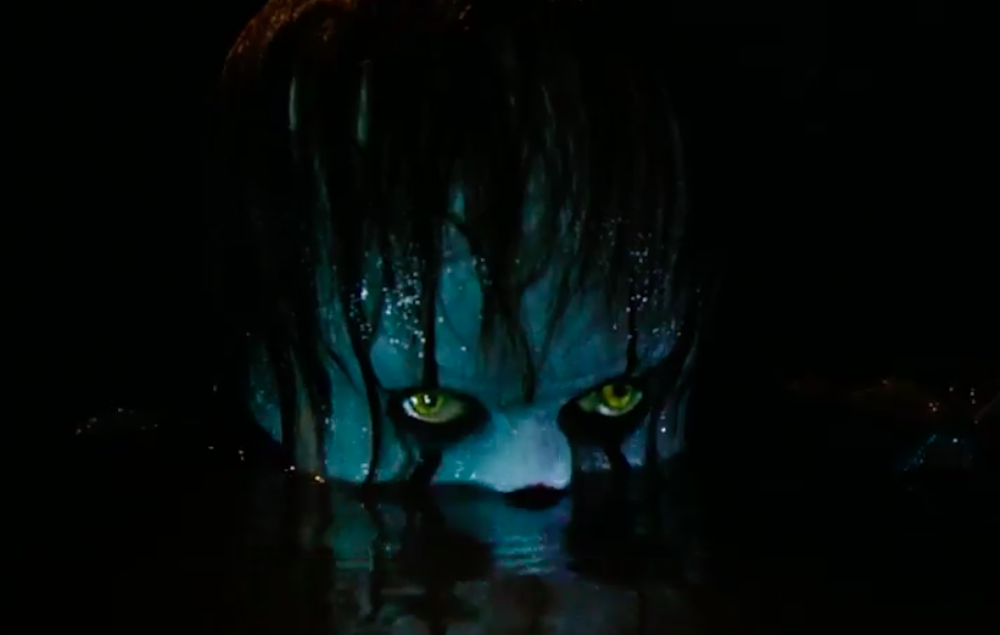 Right off the bat, we realize this is closer to the source material than the miniseries when (minor spoiler) we do indeed get to see little Georgie’s ill fated meeting with Pennywise in full, gory detail. The filmmakers decision to show this scene as it happened was a great way to show that all bets were off and nothing was being held back in regards to the violence against the children. Killing kids is considered a taboo in horror, but its a taboo that Stephen King gleefully pisses on in his work. I can almost imagine he has a smile similar to The Grinch when he writes those scenes.

One of the wisest decisions that the filmmakers made was moving the timeline from the late 1950s to the late 1980s. When the original miniseries aired, our parents, grandparents and older relatives were filled with the nostalgia from growing up during that time and reminiscing about the good ol’ days. 27 years later, it’s our turn to do the same. It’s a virtual 80’s time capsule, and it works to help establish this version of IT in a way that will seem familiar to most children of that decade. 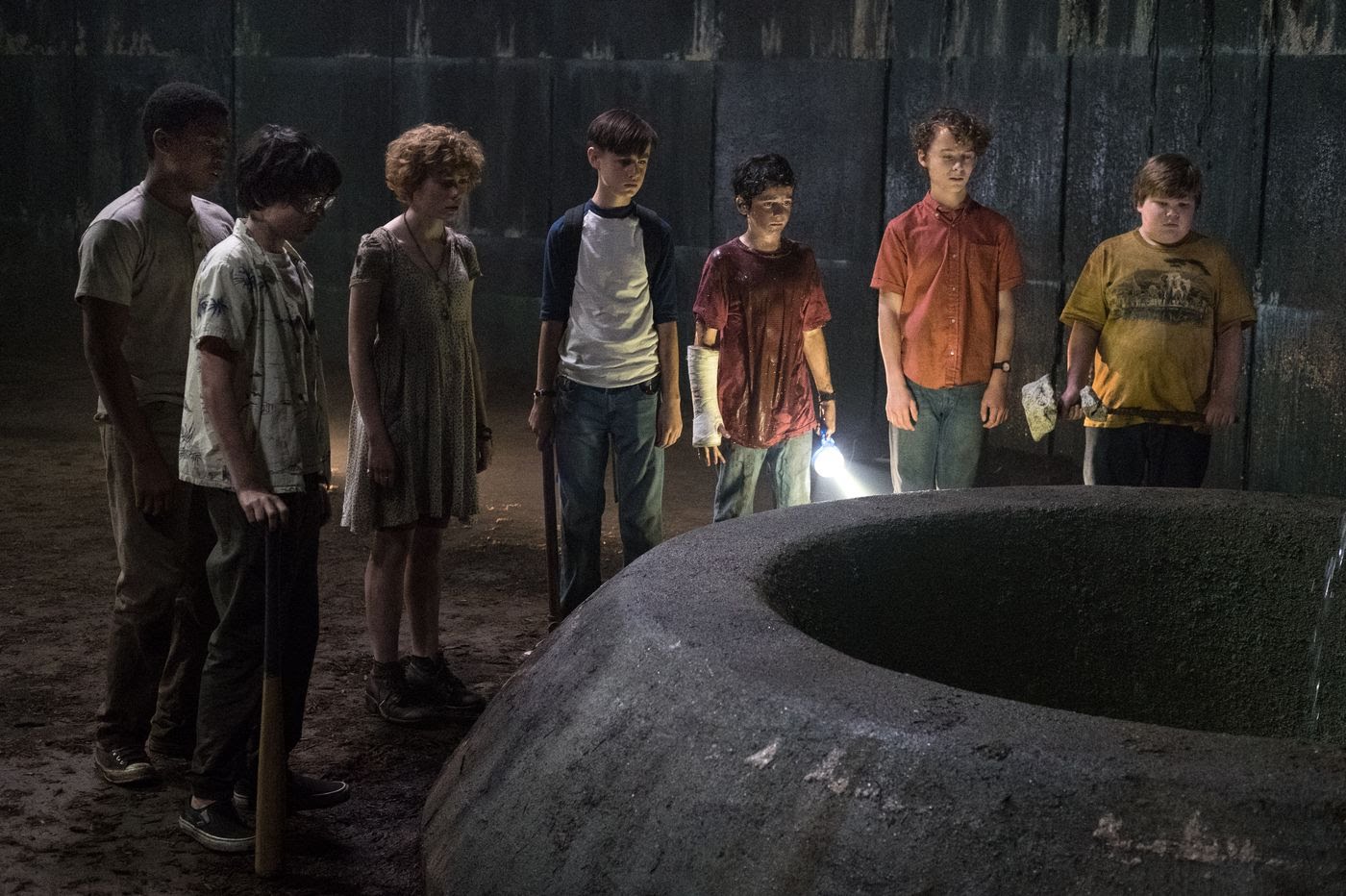 The little town of Derry seems to be a quaint little town on the surface. And, while we know what lurks beneath the streets, there always seems to be something sinister at play whenever Pennywise isn’t around menacing the kids. “It”s presence and influence is felt throughout the town, even when “It”s not in plain sight or right in front of your face.

The adults are portrayed in a way that seems overly creepy or mean, and honestly not one of them would make even Freddy Krueger feel safe. The parents don’t believe or don’t want to believe these kids because they can’t see the effects that Pennywise has on every aspect of their daily lives. Ignorance is bliss when you’re an adult, so its easy to not see what your child may see. 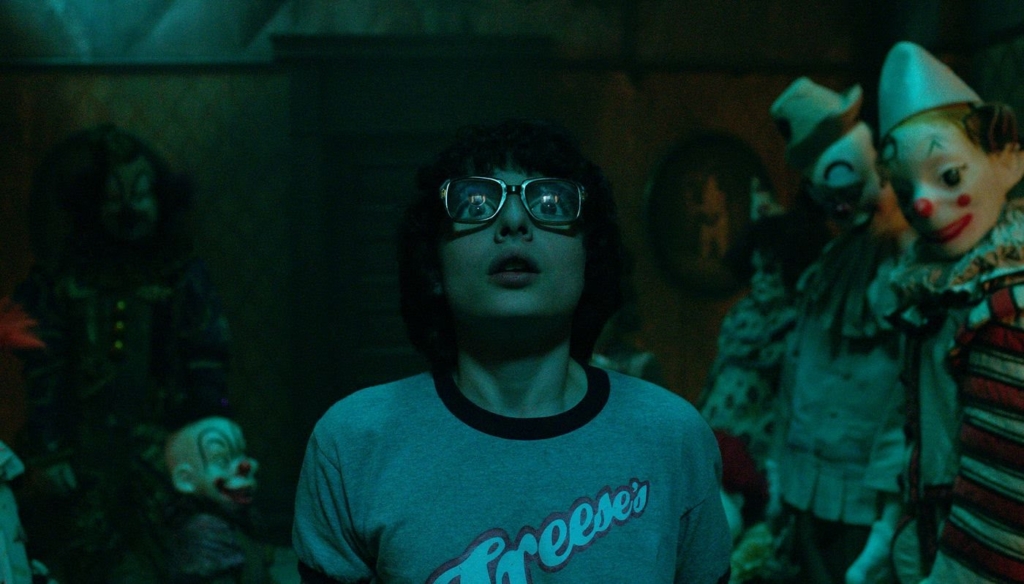 The true heart and soul of this movie is The Losers Club. In fact, by the end of the film, you will fall in love with all 7 of them…guaranteed.

These kids had the daunting task of bringing to life a group of beloved King characters that were also done justice in the miniseries. Not only did they deliver in spades, but each owned their respective Loser. While each of these actors are fantastic in their own right, two of them were the breakouts — and they will be the ones to watch. The first is Finn Wolfhard as Richie “Trashmouth” Tozier. Yes, he is currently on the smash Netflix show STRANGER THINGS as Mike, so we already had an idea of what he brings to the table.

It’s his performance as Richie that shows how truly gifted this actor really is, as he steals pretty much every scene he inhabits. Richie is the comic relief. And quite honestly, this movie is really funny…more than I thought it would be, not just with him but with the other kids as well. But he gets the best jokes and definitely has a Trashmouth. 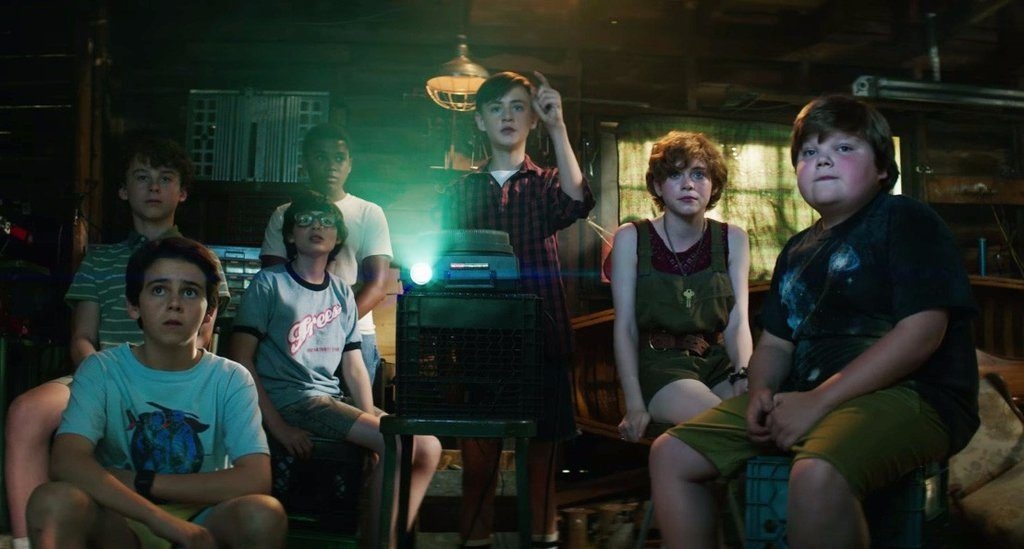 The other breakout star is Sophia Lillis. She delivers a fearless performance as Beverly Marsh. She proves she is more than capable of handling herself and hanging with the boys. Whenever Bill wants to go after It, she is the first one to volunteer to help, while the other boys are too chicken shit to help. This version of Bev is tough. She has definitely been through some shit in her young years, but it’s made her a strong person. Much like I stated about Gal Gadot’s performance as Wonder Woman earlier this year, we are witnessing a star being born with this young actress.

Of course, none of this matters if the titular character is anything less than 100% in execution and delivery. Basically the weight of the movie is on Pennywise’s puffy shoulders. 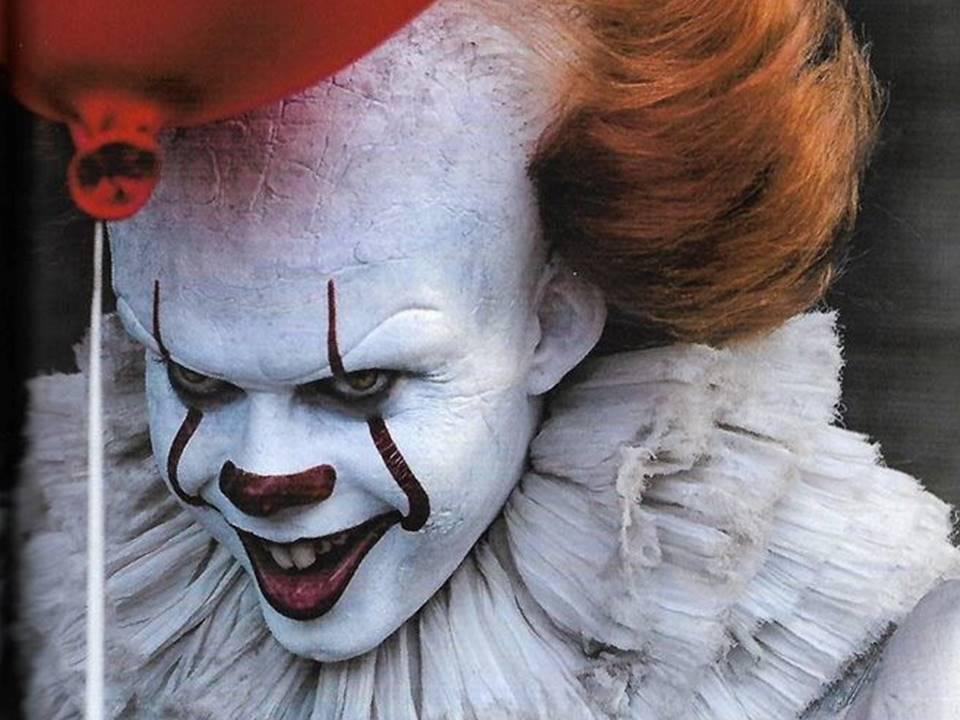 Not only does Bill Skarsgard deliver in the role of the child eating clown, he is fucking terrifying as Pennywise!

When we first see Bill in the full Pennywise drag, we know we are seeing something special and completely different from Tim Curry’s version of the clown. As Pennywise is talking to Georgie, It is literally drooling with the anticipation of what’s about to happen next. In fact that’s the first of many tense scenes involving Pennywise, and Skarsgard earns his clown makeup, as he gleefully terrorizes the kids and the audience.

Coulrophobics be warned, his performance may push you over the edge and cause some serious nightmares over the next few nights. He has created a villain that is in the upper horror echelon with Freddy Krueger, Jason Voorhees and Michael Myers…one that will live on forever. He also created a scenario similar to the Nicholson/Ledger Joker debate, that will now put Curry vs Skarsgard as which one is the better Pennywise. I would absolutely pick Bill Skarsgard as the better Pennywise, and I’m a person who loves and respects Tim Curry. 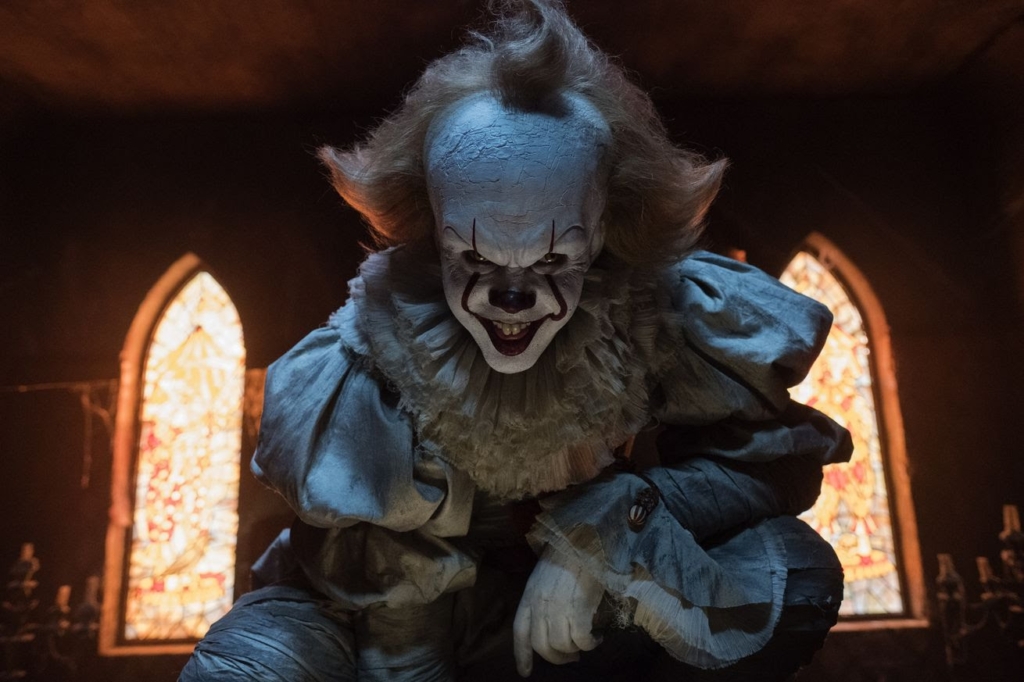 He had the vision to make this an R-rated, true to the source material film, yet he managed to create some new surprises for even the most dedicated King fans. He also keeps things colorful (not in the Joel Schumacher BATMAN & ROBIN Technicolor vomit way), which goes against the horror movie cliche. And fans of the novel, keep an eye out for a few Easter Eggs throughout the movie.

The movie is not fully perfect (no film is), but the minor issues I had were just that — minor. If any of the Losers gets shafted, it’s definitely Mike Hanlon. That’s a shame because Chosen Jacobs plays him as a strong character, and a bit more development with Mike would’ve been a good thing. The pacing is a bit slow at times, but even then it picks up when you least expect it. There is one scene with Pennywise that is so blatantly CGI, it almost ruins the scene entirely. 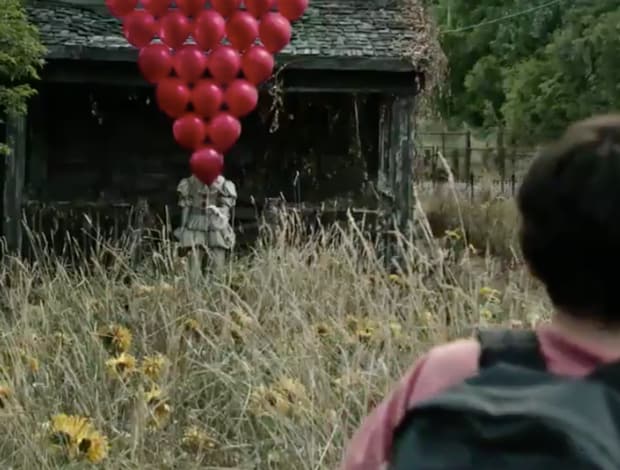 Other than that, we have a nearly perfect horror film…a film that is just as much a comedy, drama, love story and coming of age tale as it is a horror movie.

To me, IT was always a story about the loss of childhood and the ascension into adulthood. Pennywise being a child eating monster has always been the metaphor for the moment we face our fears as a child and take our first steps into becoming a grown up. This film perfectly captures that in one scene when Pennywise looks at Bill and says, “I’m not real to you, Bill? This isn’t real enough to you?” It’s at that moment they stop being children and start becoming adults, as their own mortality is facing them head on. 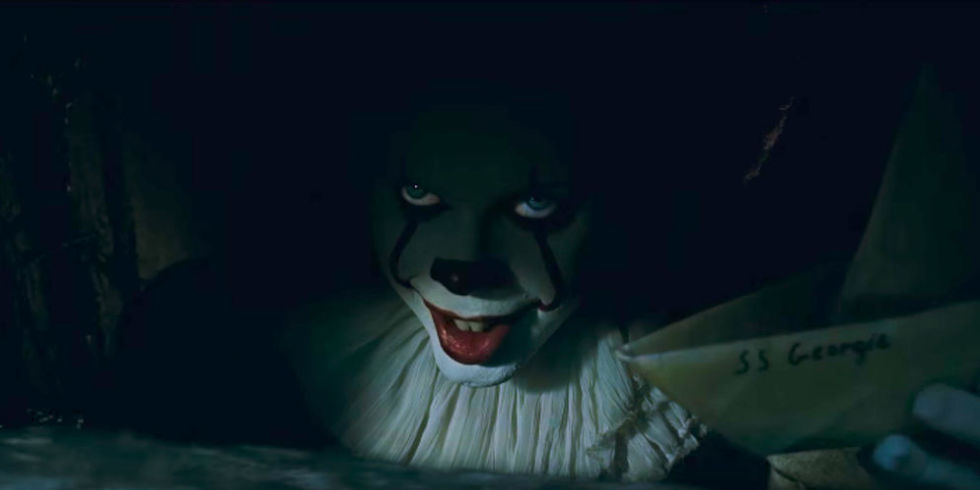 Overall, this is one of the most enjoyable studio horror movies you’ll ever see. The time and effort that went into crafting each scene is clearly visible. The filmmakers and cast truly wanted to deliver something special, and they have done that wonderfully. While it’s no big surprise, the 2nd part of this tale is coming, and I can only hope that it is in the same league as this film.

This is a must see film. While comparisons to STRANGER THINGS and STAND BY ME are bound to happen, that’s not necessarily a bad thing as this story influenced the Netflix show…and King wrote the novella that was adapted to that film.