Featuring strong performances and a lot of tongue-in-cheek, Peelers is the perfect monster-zombie movie for a Saturday night watch 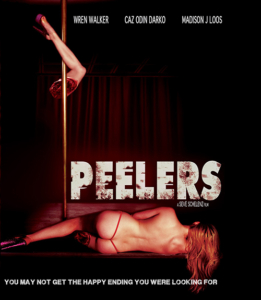 While Peelers doesn’t always feature the smartest of dialogue and takes a while to reach full-throttle, the movie remains a fun and impressive take on zombie-inspired horror. Among the picture’s many strengths are its memorable primary characters and its creative gore sequences. 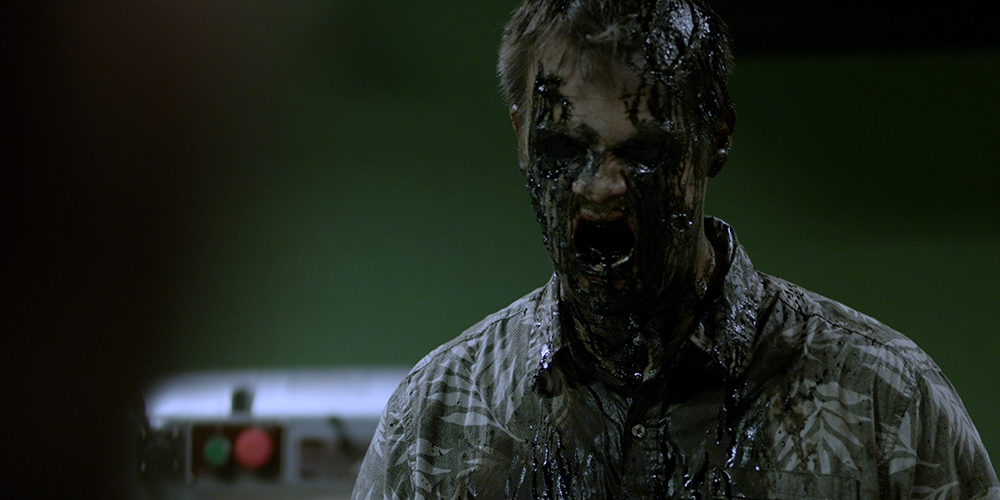 Blue Jean (Wren Walker) is the club’s owner, a feisty and confident young woman who refuses to allow anyone to treat her and her fellow dancers with disrespect. Right off the bat, Blue Jean and her friends/employees (including “Baby,” played by Nikki Wallin, and “Frankie,” played by Momona Komagata) come across as intelligent, strong-willed, quirky, and funny. The film’s screenplay, written by Lisa DeVita, never talks down to these characters, and instead imbues them with ambitious spirit and uses their roles as exotic dancers to enhance the playful mood of the story.

Although “Peelers” spends a little too much time with exposition, the characters are so well-developed and engaging that waiting for the bloody chaos to ensue is still enjoyable and entertaining. As mentioned above, once the miners enter the club and their infection from a freakish oil spill begins to spread, Schelenz’s film becomes action-packed, filled with several scenes of gut-spilling, brain-smashing good fun.

While the sub-plots of Peelers don’t bring anything new to the genre, they do add a few elements that make the character of Blue Jean even more three-dimensional. A slimy businessman who will soon be taking over the club has a pivotal role in the story, as does Blue Jean’s son Logan (Madison J. Loos). Other than the businessman and a few obnoxious customers, all of the characters in the film are fairly likable, which helps audiences relate to them more and to care more about their fight against the infection and the crazed human-monster hybrids who now hunger for human flesh and blood.

Cinematographer Lindsay George captures the neon-tinged strip-club effectively, making good use of the low lighting, shadowy corners and back rooms, and the small stage for the dancers. Clearly, the entire production team boasts a strong energy that gives the film spunk and creativity and makes up for those few places where the indie budget causes the movie to fall short. The kill scenes are delightfully gory and creative, including the use of a baseball bat that audiences knew in advance was going to be put to enthusiastic and gruesome use.

Without question, Sevé Schelenz’s Peelers is a B-grade flick that borrows from other films of its ilk, but it is definitely a cut above most “zombie” stories that continue to flood the horror market.

The special and visual effects are top-notch, most of the humor works, the setting is put to ample use, and many of the characters have back-stories that actually remind audiences of people in the real world. Add to this mix a hypnotic opening credit sequence, some cool poster art, and confident performances from all of the leads and the film quickly becomes something quite special indeed.