“Motherly” is a surprising home invasion horror film with a twisty, character-driven story and stellar performances; an exercise in tension.

A single mother is attacked by a vengeful couple who believe she’s responsible for their daughter’s murder.

Motherly begins in a similar fashion to so many horror films that take place in a remote, isolated setting — with breathtaking shots of natural beauty that belie the horror and ugliness to come. It’s a chilling reminder that even when tucked away from the world, surrounded by tranquility, there’s no escaping the horrible hands of fate. It’s one of the reasons isolation horror is so effective and, when done right, so thoroughly terrifying.

From the opening scene, director Craig David Wallace (who co-wrote the film with Ian Malone) makes it abundantly clear that Motherly is a film of misdirection.

He begins with a fake-out; a young girl appears to be in danger as she sits on a couch, blindfolded, while a figure looms over her holding a butcher knife. But this early tension is soon allayed as we discover the figure is her mom, and the knife is to cut a piece of birthday cake.

The girl, Beth (Tessa Kozma) isn’t exactly endearing, and her relationship with her mom, Kate (the spellbinding Lora Burke) appears tenuous at best. Beth seems hostile and dismissive of Kate’s attempts to nurture her daughter. But is it just typical pre-teen angst, or is something more sinister at play?

As the story unfolds, we start to gain some insight into the likely source of Beth’s behavioral problems. 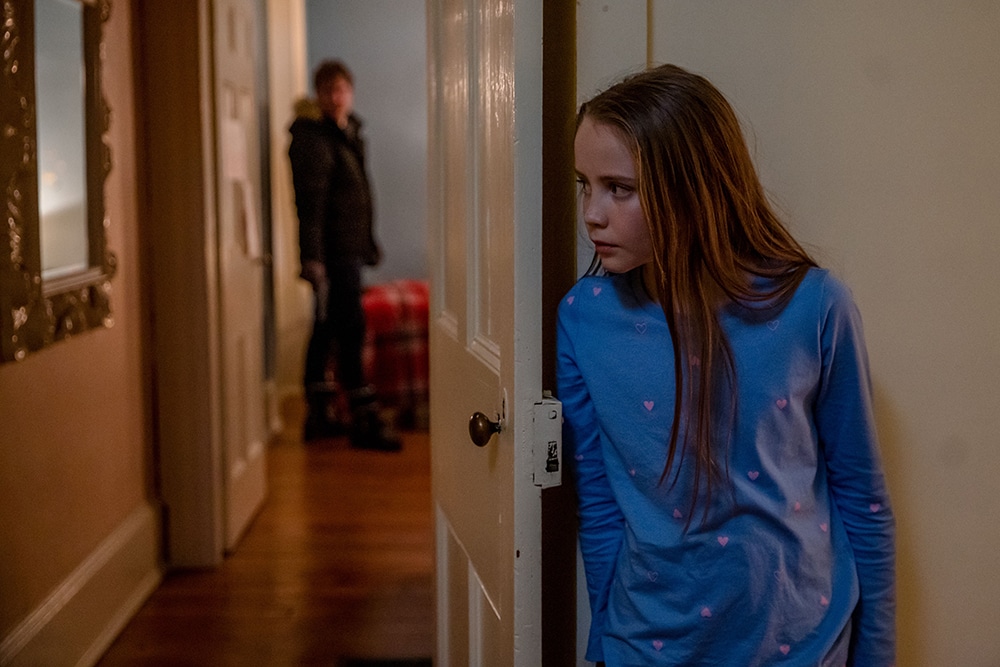 One of Beth’s childhood friends was brutally murdered in their home, a crime for which Beth’s father was convicted.

It turns out, there’s a good reason for Beth and Kate’s isolated existence — and their tense relationship. It was Kate who testified against her husband, and the two now live in secluded, protective custody. Kate has had her fair share of media attention following the highly publicized murder and trial, and she’s currently in the middle of writing a book about her ordeal.

While Kate has to contend with a nightmarish tragedy, seclusion, the loss of her husband, and raising a daughter who resents her, she appears emotionally exhausted and frayed. Though she remains under the watchful eye of her police protector, Hal (Colin Paradine) — who doesn’t exactly seem like a standup guy himself — she lives in constant fear and paranoia that she and her daughter are not safe.

Turns out, her fears were far from unwarranted as the murdered girl’s parents, Mary (Kristen MacCulloch) and Lewis (Nick Smyth) manage to track her down and violently invade her safe space. You see, they’re not convinced Kate has been entirely forthcoming about the unspeakable events that led to their daughter’s death.

And they’ve come to extract the truth, by any means necessary.

What transpires next is part brutal, home invasion horror — with just a bit of nastiness — and part taut, mystery thriller. 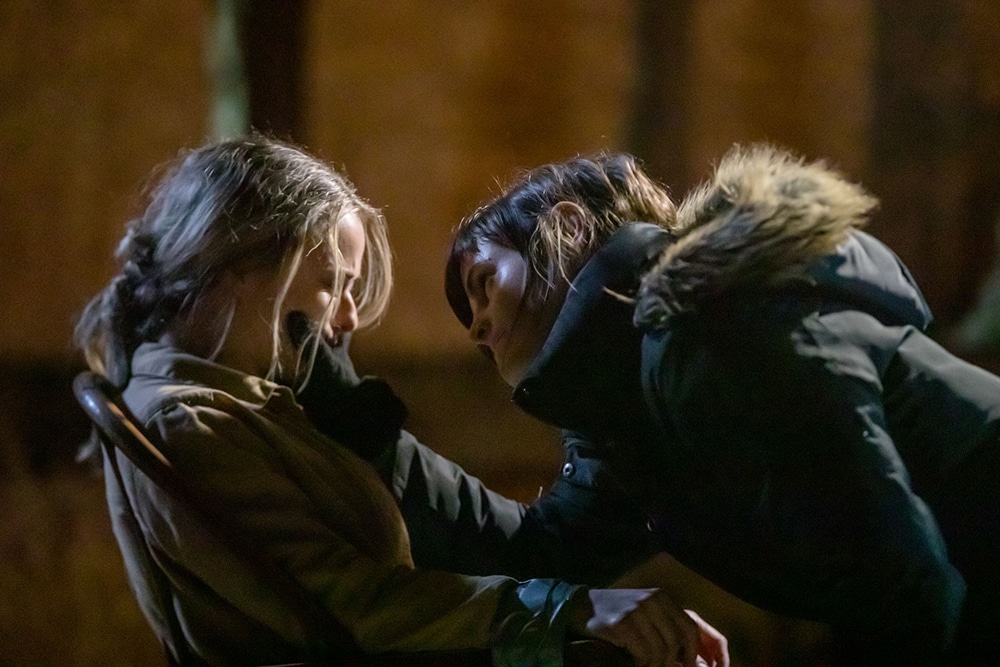 The pieces of the puzzle slowly begin to unfold through a series of ever-changing flashbacks, as reflected through Kate’s eyes, who may or may not be a reliable narrator. Her tormentors demand the truth, and she struggles to reveal it, but we’re never quite sure if it’s really the truth or just fear and desperation.

Wallace masterfully creates a gripping sense of tension and claustrophobic terror, all culminating in a shocking ending that changes the nature of the film entirely. You may or may not think you have it all figured out. But even if you think you know where it’s going, the journey to get there is tremendously satisfying.

Much of the film’s success lies in its outstanding performances.

Burke (For the Sake of Vicious, Poor Agnes) is phenomenal as always here, showcasing a vast emotional range and shifting effortlessly between beleaguered victim to fierce lioness protecting her cub. She flawlessly sells the heartbreak of trauma and grief, the relentless torment of fear, and the undying devotion of a mother’s love.

Kozma dazzles as 9-year-old Beth, making it easy to feel both anger and empathy for her. She perfectly conveys the difficult temperament of a spoiled child — ungrateful, rude, thoughtless. Yet, she also makes us feel for her predicament and read undesirable behavior as a reflection of inner pain.

The mother-daughter relationship, brought to life through Burke and Kozma’s powerful performances, feels incredibly real and fraught with all the complex interpersonal dynamics many parents will be all too familiar with. 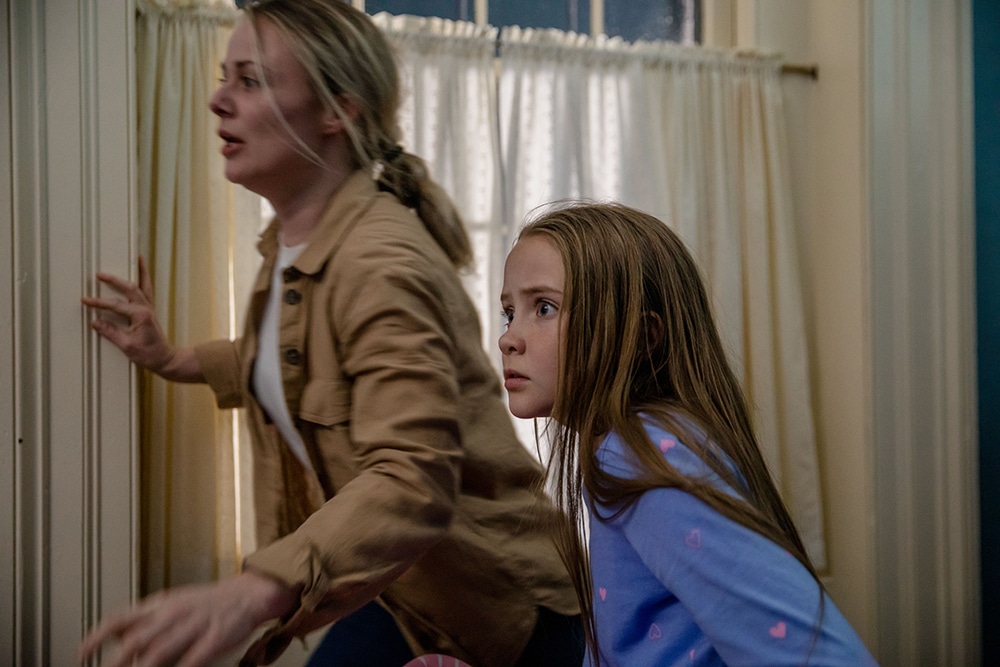 Wallace takes his time getting to the horror, which gives us time to get to know these characters and invest in their plight.

Kristen MacCulloch (Psycho Goreman) and Nick Smyth are tremendous as the unlikely antagonists of the story, grief-stricken parents at the end of their rope who want answers and closure even more than they want revenge.

The scenes between Burke and MacCulloch are electrifying — two mothers whose worlds revolve around their children and who would do anything, even the unthinkable, to protect or avenge their babies.

As an exercise in tension, the film is aided considerably by a dread-inducing score courtesy of Spencer Creaghan, as well as some captivating camerawork from Christoph Benfey.

Motherly is a film that is easy to recommend. It has enough intensity to appease horror fans without crossing the line into excessive, hard-to-watch torture. The brisk 80-minute runtime keeps the film moving along at a steady pace, never outstaying its welcome.

The mystery of Motherly is a thrill to unravel, and knowing where it’s going doesn’t detract from the ride — though I do recommend you try to go in as cold as possible to maximize your viewing enjoyment.