Adapted from a moving stage play, “My Name is Myeisha” is a truly unique, deeply affecting and unforgettable journey behind the horrifying headlines. 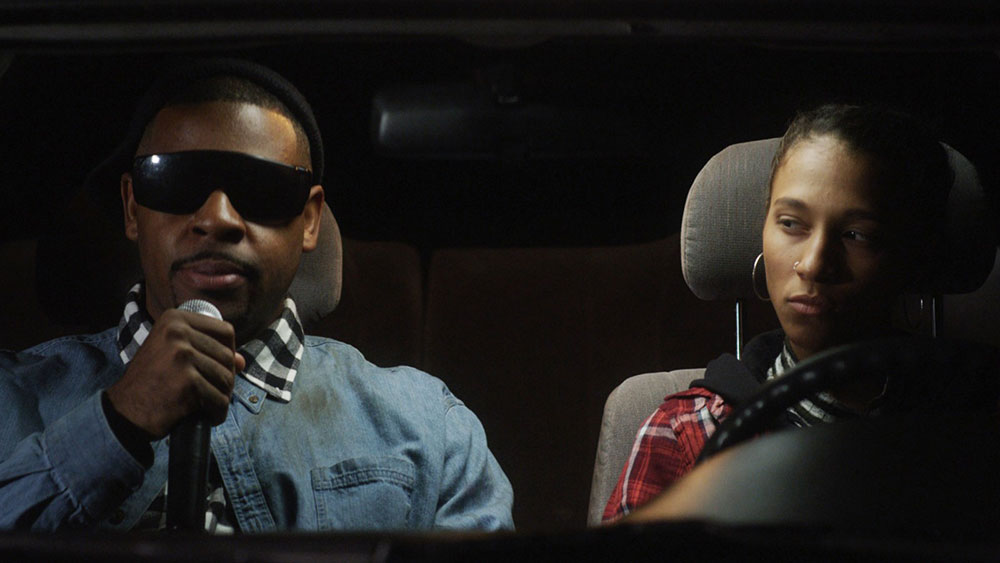 I realize it’s not classified as a horror film, but it’s been quite some time since I’ve seen something as truly terrifying — and gut-wrenchingly heartbreaking — as My Name is Myeisha.

Taking place over the course of one fateful night, December 28, 1998, My Name is Myeisha tells the story of a 19-year-old black woman name Myeisha Jackson who, while lying unconscious in a parked vehicle, was shot multiple times and killed by police offers.

Based on a play called “Dreamscape” written by Rickerby Hinds and inspired by true events, Gus Krieger’s film is unlike anything you have ever seen. Told in non-linear fashion through seventy-five minutes of spoken word poetry, beatboxing and hip hop dancing, it’s a powerful and deeply affecting snapshot of a promising life cut far too short. 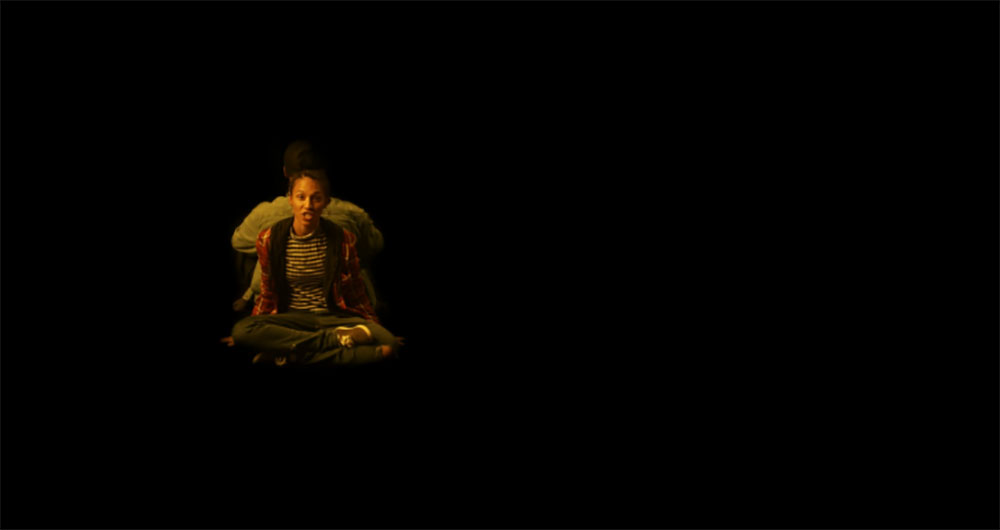 Following arresting opening credits over beatboxing, the film start unassumingly enough, in the middle of a family celebration of Kwanzaa. We meet Myeisha, a bright and funny young girl, and we very quickly learn she comes from a loving and supportive home.

The first eight minutes of the film follows a typical narrative structure as we set up the events of the night that culminated in tragedy.

We follow Myeisha as she heads out for a fun night on the town with her cousin and friend. On their way to a club in LA, they get a flat tire and are forced to park at a gas station in a bad part of town. The two girls go to get help while Myeisha stays behind to guard her Aunt’s car.

When the girls return, they find Myeisha passed out and unresponsive. She’s got a gun sitting in her lap (for protection). Unable to wake her and worried something might be wrong, they are forced to call 9-1-1. Minutes later, the police arrive on the scene. 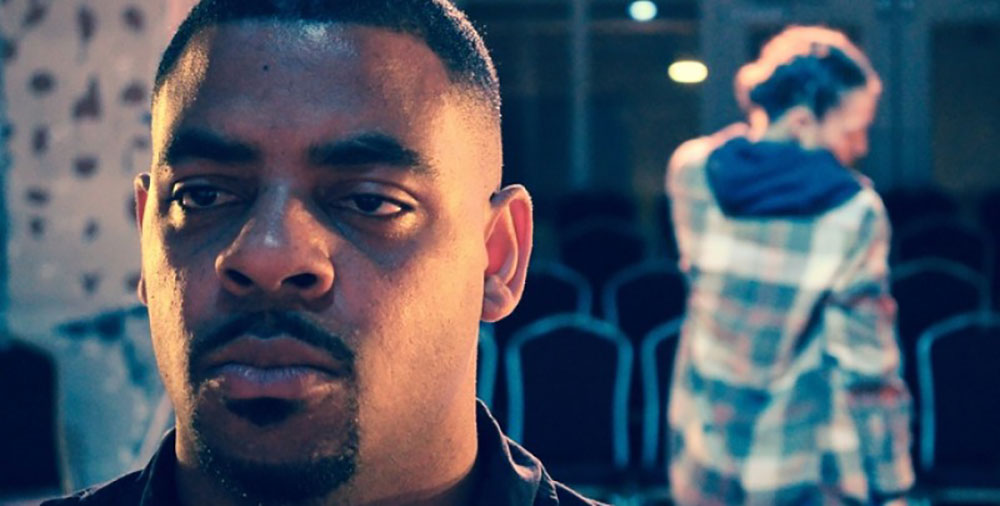 From this point on, nothing will ever be the same. And Krieger brilliantly reflects that somber reality through a dramatic change in tone, style and narrative structure. For the remainder of the film, we enter Myeisha’s dreamscape, as her subconscious foreshadows her impending doom.

Everything that happens throughout the remainder of the film is told through Myeisha’s mind. She will never regain consciousness. As officers bang on her window, shatter the glass and (for whatever reason) open fire in her car, her life flashes before her eyes.

To signal the shift from the narrative events to Myeisha’s dreamscape, we see her ‘wake’, visibly shaken and disoriented, uttering a chilling phrase that will become a repeated refrain throughout the film: “Ever have one of those dreams, where nothing comes out when you try to scream?”

Her mind is aware that something is terribly wrong, but she is unable to wake, cry out, or otherwise stop the disastrous chain of events. Instead, we are taken on an unforgettable journey through Myeisha’s life — during the last few minutes of her life. We get to know her hopes, dreams, fears, and everything that makes her unique and special.

It’s a journey powered by her love of music, dance, and poetry. Her dreamscape is a beautiful, deeply moving and artistic world that serves in stark contrast to the brutal reality of the events unfolding in real time.

Much of the narrative is told following the path of the twelve bullets that ripped through her body. As a coroner examines her and coldly, clinically assesses the damage each bullet caused, Myeisha looks on and reflects on some part of her life that the bullet’s impact triggers.

For example, as the coroner references a bullet to her chest, she fondly remembers how she felt when she finally developed at age sixteen — the first time she felt good about her body — and what it felt like to fall in love and have her first sexual experience.

It’s a powerful reminder that it’s not just tissues and bones that lay on a slab on a cold examination table.

In the last eight minutes of the film, we get to gunshot number 10, the first wound that would be fatal. The tone of the film changes again, becoming darker and more somber, and the reality of the situation comes crashing down as Myeisha laments, “At nineteen, knocking on heaven’s door.”

We get one final, heartbreaking reminder about the impact of the life that has just been taken, with Myeisha uttering her last lines of the film, “You know me.” And, after an extraordinary 90-minute journey told in a myriad of artistic expressions interspersed with fragments of her life, we truly feel like we do know her. We ARE her.

The final horrifying moments of the film, where we briefly return to traditional narrative structure, are among the most intense and absolutely haunting you will ever witness.

For this film to work as well as it does, you need to truly care about Myeisha — and feel how much others in her life care about her. This is about more than just a tragic loss of life. It’s a loss of a future and of the promise of what that future could have held. It’s the loss of so many hopes, dreams, and possibilities.

The film hinges on Rhaechyl Walker’s performance as Myeisha, and she delivers in spades. Not only does she positively shine during the performance art pieces, mesmerizing with her dance and spoken-word poetry, but she brings an undeniable humanity to the role and makes us feel a connection to the character that strengthens the impact of the shocking events.

Walker, who also performed the role in the stage version, gives a remarkably impressive and flawless performance that can’t be overstated.

The other star of the show is John Merchant, who takes on multiple roles as the rookie officer who first opens fire on Myeisha, the coroner examining her body, and other peripheral characters. He shows off his considerable beatboxing skills throughout the film, as well as his striking baritone voice.

Sometimes when writing a review, I struggle to find enough words to flesh out a meaty enough encapsulation of my thoughts. In this case, however, I struggle to restrain my desire to talk about this film for hours. As much as I want to say, there aren’t any words that can adequately express the impact of this film.

When playwright and educator Rickerby Hinds first heard the story of Tyisha Mills, a nineteen-year-old woman who was shot and killed by police officers in the late 90s, he felt compelled to write the stage play on which the film was based. When filmmaker Gus Krieger saw the play, he knew he had to adapt it for film.

When you watch it, you’ll likely understand why both men felt so compelled to share it with the world.

Perhaps most heartbreaking of all is how utterly timely the film feels. Although it’s based on events that took place two decades ago, the culture of indifference and systemic racism addressed in the film feels especially relevant during today’s highly divisive and racially charged times.

My Name is Myeisha moved me and changed me in ways I was not prepared for.

If you get the chance, please see this film. It’s remarkably unique, powerfully affecting, and completely unforgettable. It’s a film that deserves to be seen by as many people as possible — a film we need now more than ever.

My Name is Myeisha is currently touring the festival circuit, and this review is based on the recent screening on November 3rd, 2018 at the Ithaca Fantasik film festival.