You can come on in, but there’s not much to see: A review of the newest Netflix original film  “The Open House” Matt Angel and Suzanne Coote 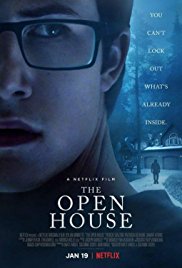 Open houses do offer a unique opportunity. They allow people, many times perfect strangers, to enter the home, the sanctuary, and the physically embodied headspace(s) of its occupants. Open houses allow people, many times perfect strangers, a look inside not only the living space, but the hiding place that has our address. It’s not hard to imagine that someone could use details gleaned from the open house for malicious and terrifying purposes.

In The Open House (2018) written and directed by Matt Angel and Suzanne Coote, and staring Dylan Minnette, Piercey Dalton, Patricia Bethune and Sharif Atkins, this chilling idea is explored, but never fully exploited — leaving the door open for disappointment.

In fact, for the good majority of the film’s run time, I was numbingly bored.

Much like Logan (Dylan Minnette) who, after witnessing his father’s death, is dragged up to a large and desolate mansion that his mother’s sister is attempting to sell, with nothing much to do other than worry if someone is spending the night without his knowledge. The deal is that Logan and his mom can live in the mansion as long as they look after it and stay out of sight during the daily open houses.

The mansion is spacious, but like outside, lacking in warmth or comfort, two things Logan and his mother both desperately need. Add to this, strange phone calls with no one on the other end, things moving on their own and the daily disruptions of people coming in and out of the mansion…and it becomes clear that Logan and his mother are doing the exact opposite of healing.

Instead they’re growing sick, and someone’s waiting in the dark to cure them. To kill them.

‘The Open House’ started, like its characters, strong and healthy. It gave little inclination to the fact that it would soon take a turn for the worse and never get better. I generally enjoy quiet horror stories. I generally like films that brood and boast copious amounts of desolation and darkness. But ‘The Open House’ was far too open. Too quiet. Too expansive and isolated for its own good.

I don’t blame the film or its characters for wanting to go back. I don’t think any viewer would. The rest of the film grows increasingly cold, not just in plot but in delivery, losing the interest of the viewer. It trudges (mostly) till the third act, when it picks up its feet and tries to save itself. But its limbs are frozen stiff, frostbite seems inevitable, and any question as to how the film ends steps aside for the bigger question…WHEN will the film end?

There was a lot that I really liked about this film in terms of its concept, cinematography, acting and ideas. I’m not sorry I visited the open house, I just don’t think I’ll be buying.