In Unearthed Films’ first release of this new year, the specialty distribution company again shows its penchant for provocative films. Adrian Corona’s DIS is no exception to this fact — although it does hold a very unique weight amongst many other Unearthed titles. It is dark and strangely enchanting. A horrific, beautifully filmed story of sin and the journey to Hell for one very flawed man.

Even with minimal dialogue, I was completely invested in this film and with Bill Oberst Jr’s (Circus Of The Dead) portrayal of Ariel, a former soldier. His performance is utterly raw, yet again showing he has no fucking fear in front of the camera. Despite the fact his first line isn’t until about 20 minutes into the movie, his silent, sulking yet intense screen presence moved me.

The cinematography by Rocco Rodriquez and the complimentary score perfectly pair with the utter isolation and impending doom felt throughout DIS, with both becoming a key component in telling this ultimately tragic tale. 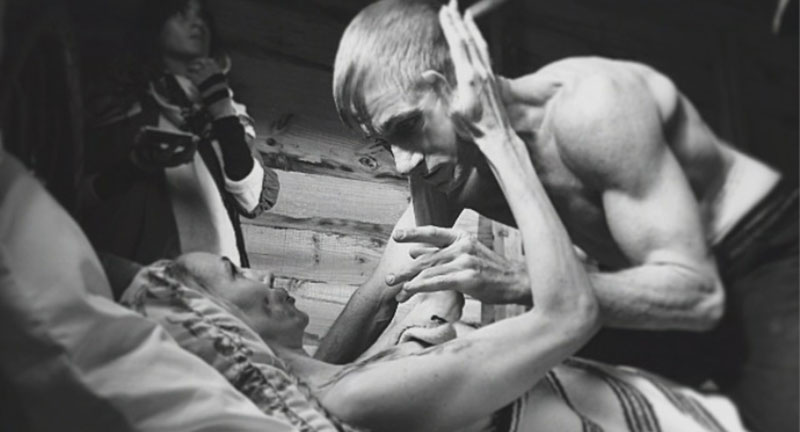 Corona’s film is divided into three parts that are uneven in both length and pacing, which would lull me into a false sense of comfort at times within the film. Just when I would stop being challenged with what I was seeing on screen, another tantalizing display of Hell was offered.

DIS starts off with a bang though in Part One which was entitled “The Figure.” We can hear a baby’s cry morph into the squeal of a pig. A woman is naked, shackled and completely vulnerable within a crumbling, deserted building. Her hooded captor is quiet, purposeful, and terrifying as he injects her with an insanely large syringe. The size of that fucking needle made me shudder.

Moments later he suddenly begins to arouse her. But not before he places a bowl beneath her, proceeding to pleasure her only with his fingers and discovering she’s a squirter! The hooded figure collects what the young woman shamefully shared into the bowl. And that folks is how DIS begins.

After that opening, I was firmly focused on going down this dark rabbit hole dug by Adrian Corona and his cast and crew. DIS seems to be based on a bold ancient belief born of wickedness both in nature and in man, with this being at the start of the film;

“Mandragora is supposed to be a creature having life, engendered under the earth of the seed of some dead person put to death for murder.”

Ariel and his unscrupulous history provide exactly what the mysterious figure needs as we find out in flashbacks. With the short run time of just about an hour, we are given what we need as an audience into the background of Ariel, easily ascertaining he is not such a great guy.

In “Part Three: DIS”, it is time for Ariel to repent for his sins as he comes face to face with his demon and The Figure, who are one and the same.

There is a dismal, perhaps even shocking, conclusion awaiting those that experience Corona’s film.

It is far removed from having a happy ending, leaving you with a residual effect that is akin to a vivid nightmare. I feel it is a significant addition to the Unearthed library, showing the variety founder Stephen Biro seeks out with the films he chooses. The appeal of DIS, for me, was the uncommon story coupled with the artful approach Corona took to deliver this masterful mindfuck — a mindfuck I was not expecting but ended up truly enjoying.

DIS will be released January 22nd, but you can pre-order your copy now at https://www.unearthedfilms.com You can also stream other selected Unearthed Films titles over at their Vimeo Channel https://vimeo.com/channels/unearthedfilmsextreme.