I just watched a film that took me on one of the wildest rides of my cinematic life. Almost impossible to describe, The Retaliators is like three, maybe four films in one. And for many, that much genre-jumping transmutation may be disorienting. However, I found it to be wildly fun and absolutely bonkers in the best possible way.

First, let me back up and set the stage.

This musical pedigree is a key part of the film’s marketing strategy.

The film stars Rescue Me’s Michael Lombardi, who also directed alongside Samuel Gonzalez, Jr. and Bridget Smith. His co-starts include Marc Menchaca of Ozark and Joseph Gatt from Game of Thrones.

The Retaliators opens with a great voiceover from Lombardi and some lovely mountain scenery. It’s a compelling intro where Lombardi’s character, Bishop, muses about choices and asks, “When do the sins of a good man make him bad?”

This sets the stage for a dramatic, character-centric thriller, which The Retaliators is — kind of.

After Bishop ends his monologue with a strange bit about preferring to keep evil alive rather than destroy it, we cut to a dramatic shift in music and see a man throwing what looks like a body down the well.

Cut to two young women driving in a van on a road trip. There’s a stunning overhead shot of the van reminiscent of that sweeping helicopter shot in the opening scenes of The Shining that tracks Jack Torrance and his family’s car through the snow-capped hills of Glacier National Park.

We also get the first hint of just how rocking this film’s soundtrack will be.

It’s beautiful and atmospheric right out of the gate. But the girls soon realize they are lost. Two choices remain before them: turn back and lose an entire day of traveling or chance the unlisted road with the ominous “Slaughterhouse on Premise” sign guiding the way.

As fate would have it, a flat tire forces the decision, and the girls pull over to change it. Uh-oh. We’re horror fans; we know where this is headed. (Only, spoiler alert, we have, in fact, no idea where any of this is headed!)

At once, the woods are filled with a foggy cloud cover. And one of the girls, Erica, is suddenly dragged off by an unseen force.

The remaining girl looks out the van window to see what looks like a zombie approaching. As she screams in terror, another unseen entity slices off its head. The next thing you know, someone desperately tries to get into the van through the back door. The girl is understandably terrified. It opens, and it’s a man covered in blood, telling her they must get out of there immediately.

He also hints that the threat isn’t zombies. But before he can explain what it is and rescue her, he, too, gets dragged under the car, and a horde of the zombies-not-zombies descend upon our poor victim.

It’s a truly scary scene that sets the tone for a bloody and brutal gorefest, which The Retaliators is — kind of.

Next thing you know, we’re listening in on a grief counseling session. A teen girl has lost her mom. Her dad watches from outside the door, uninterested in participating himself.

That man is the same blood-soaked savior from the opening, Bishop. Clearly, we’re watching the film’s events play out of order.

And now, we have to figure out how this mild-mannered, widowed preacher and father of two daughters — who refuses to stand up to bullies and preaches about turning the other cheek and letting God’s justice reign — ended up drenched in blood and slicing up zombies-not-zombies.

Speaking of, if those creatures from the opening weren’t zombies (they sure as hell look like zombies), what were they? Why are they out for blood? Whose body was getting dumped in the well, and who was doing the dumping?

It sets up a twisty mystery thriller, which The Retaliators is — kind of.

Don’t worry. We get answers to everything, none of which you’ll expect.

In fact, mad props to The Retaliators for repeatedly subverting all my expectations. I had no idea what to expect from one minute to the next and repeatedly found myself asking, “WTF?” I say that with loving admiration.

Back to Bishop. He’s a good man, doing his best for his daughters after his wife’s untimely passing. We get a heavy dose of foreshadowing. He works out a lot, loves action movies, and dreams of owning a motorcycle — though he’s too responsible to ever actually buy one.

After an encounter with a real scumbag at a Christmas tree lot, his teen daughter chastises him for not being bolder and fighting for his family. Why does he idolize the likes of Bruce Willis and Arnold Schwarzenegger at their ass-kicking, one-liner-spewing best if he isn’t going to step up when it matters most?

Cut to a violent encounter between a menacing bald dude, Ram (played by the fear-inducing Joseph Gatt), and another man in a wheelchair with a broken leg. It’s a drug deal that goes very sideways. And we quickly learn that Ram is the furthest thing from a nice guy you can get.

Bishop’s oldest daughter, Sarah (Katie Kelly) heads to a party. It’s a party Bishop didn’t want her to go to, but he caves in an effort to make her happy. She stops to get gas. Ram is getting gas at the pump next to hers. He watches her intently. She hears noises coming from the trunk. Instantly, she realizes something is very wrong and tries to make a quick escape.

Ram attempts to grab her, but she sprays him with mace and manages to escape in her car. Unfortunately, Ram follows her. Realizing she’s being chased, she makes a frantic call to her dad, begging for help.

It doesn’t end well, and what transpires is truly traumatic. The palpable fear Kelly conveys in this scene will chill you to the bone.

What has the power to turn a good man bad? We’re about to find out.

Now, the film feels like it’s heading down the revenge thriller route as Bishop drops the mild-mannered persona and becomes hellbent on tracking down whoever killed his baby girl. He teams up with a detective named Jed (Marc Menchaca), who promises to help him track down the man responsible for such cruelty.

Along the way, we get Jed’s tragic backstory and a subplot about a serial killer that gives the film crime thriller vibes, similar to Seven or Spiral.

We also get a side plot involving Ram, his gang of thugs, and a rival drug lord out for blood and vengeance.

Does it sound like a lot is going on? It is.

It’s insane how many twists and turns this film throws at you. Once we find out the answer to those questions asked at the film’s beginning, THE RETALIATORS goes off the rails — again, in the best possible way. It’s absolute unhinged madness.

I refuse to give away any more of the sadistic secrets but suffice to say, I’ve only begun to scratch the surface here. 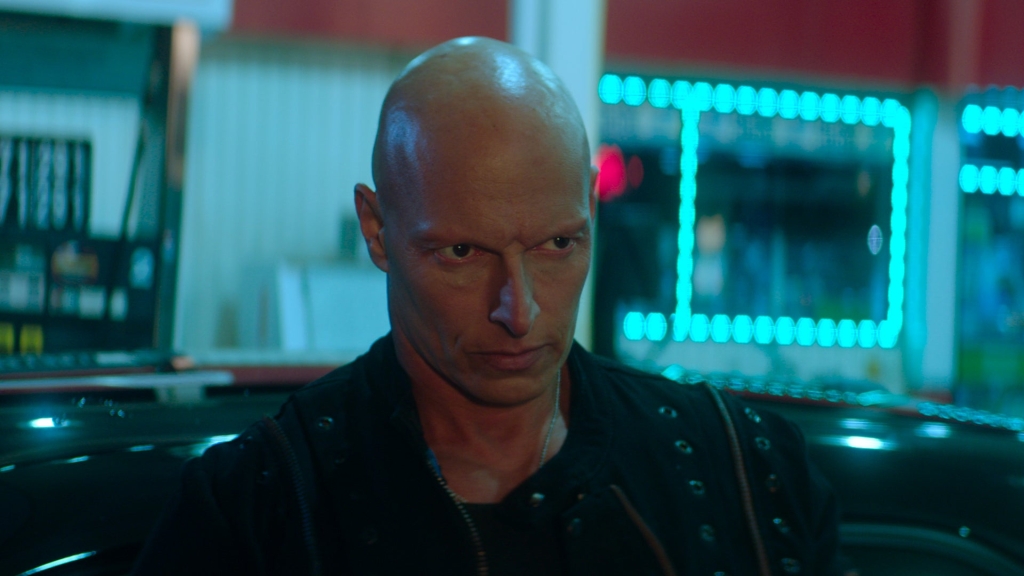