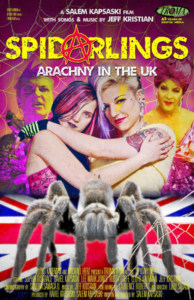 For anyone who’s ever witnessed a Troma film (because you don’t actually watch a Troma film in the traditional sense of watching a “regular” film), you may come away completely befuddled, but you certainly can say you were somewhat entertained.

Over the years Troma has produced myriad oddities such as the Toxic Avenger series or the 1999 meta-slapstick horror film Terror Firmer, and Spidarlings (2016) is certainly no exception to the general rule of strange and wacky productions.

Spidarlings is a family affair, as it was written and directed by Salem Kapsaski, produced by his mother, Gabriella Kapsaski, and it stars his sister Rahel Kapsaski, who portrays Matilda. 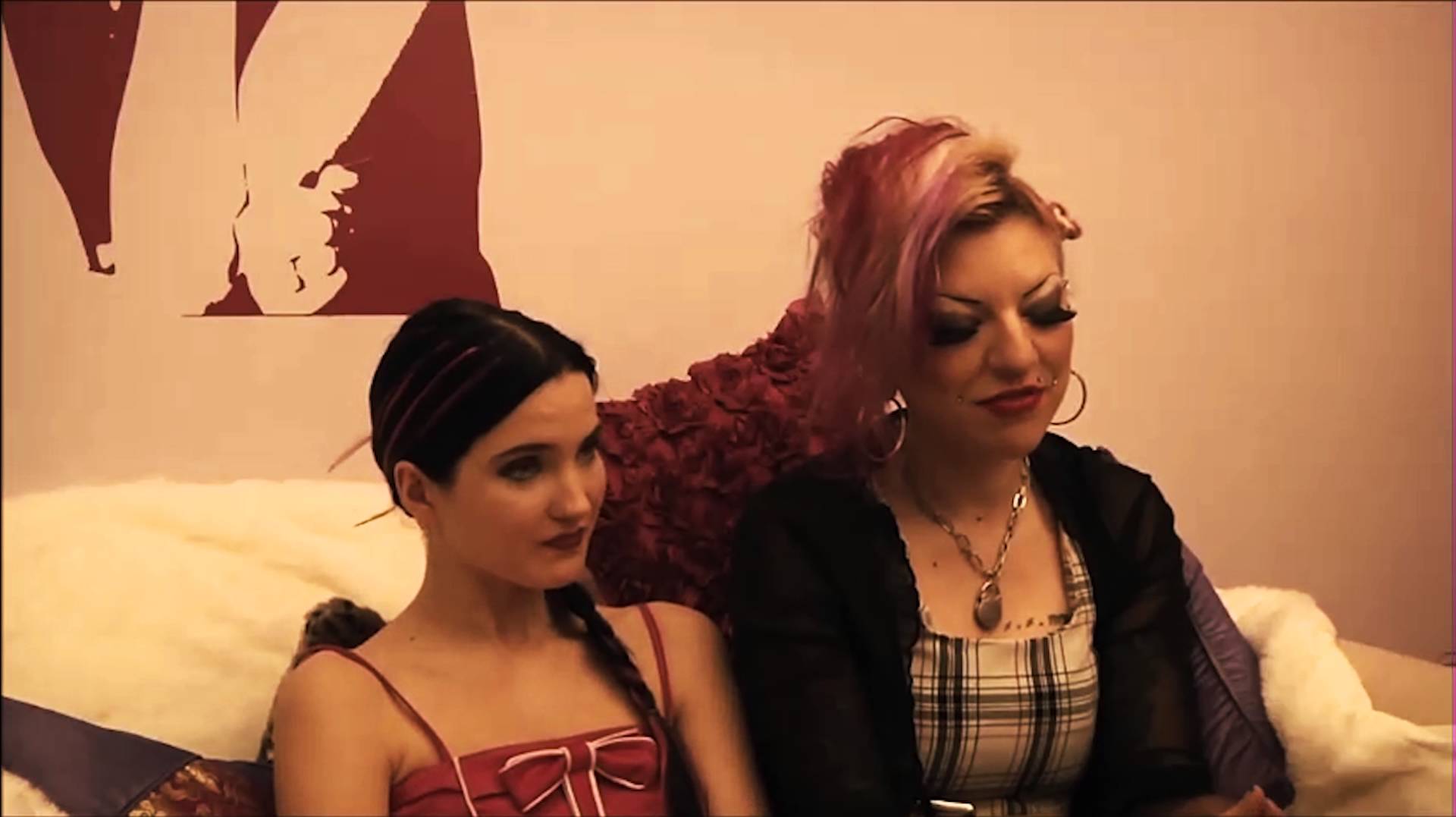 The film is a musical, of sorts, and most of the music was written and performed by Jeff Kristian, who also portrays a drag queen named The Diva. Spidarlings primarily occurs in two settings: in the apartment that Matilda and her lover Eden, portrayed by Sophia Disgrace, occupy, and in the gentleman’s club named “Juicy Girls” that Matilda works in.

The primary conflict of Spidarlings is introduced early on when Matilda and Eden are confronted by their landlord, portrayed by Chris Repps, who is kicking them out of their apartment in two weeks because they haven’t paid their rent in two years! He relates this information in a poorly-sung and barely comprehensible song, in which he relates how he took them in “off the streets” and how he feels betrayed by them. 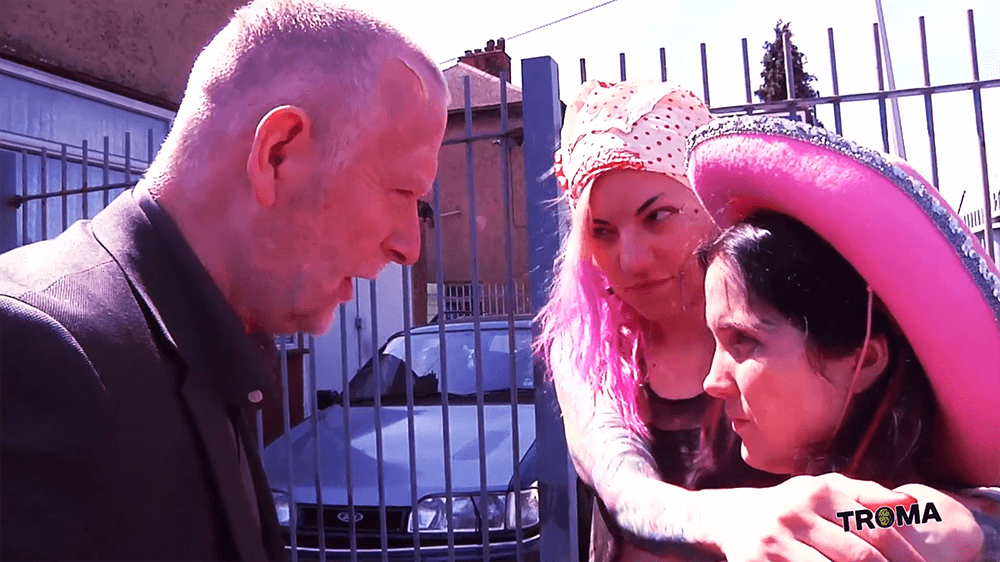 But I say the current circumstances are all on him in that he has allowed them to freeload off of him for two years! Any good landlord worth their salt would’ve thrown them out after a much shorter period of time. In any case, you feel little to no sympathy for Matilda and Eden for their “plight”, and with this established, we are forced to follow this non-dynamic and awkwardly-paired couple for the remainder of the film.

There is a deficit of chemistry between the pair, and you wonder why they have remained together — especially because their only income comes from Matilda, while Eden seemingly loafs around the apartment all day and exhibits no desire to want to do anything with her girlfriend. Matilda has to beg Eden to take her to the beach, and when Eden finally relents, Matilda steps on a piece of glass on their way to the ocean. Well, if there is a better metaphor for the nature of their relationship, I can’t find it. 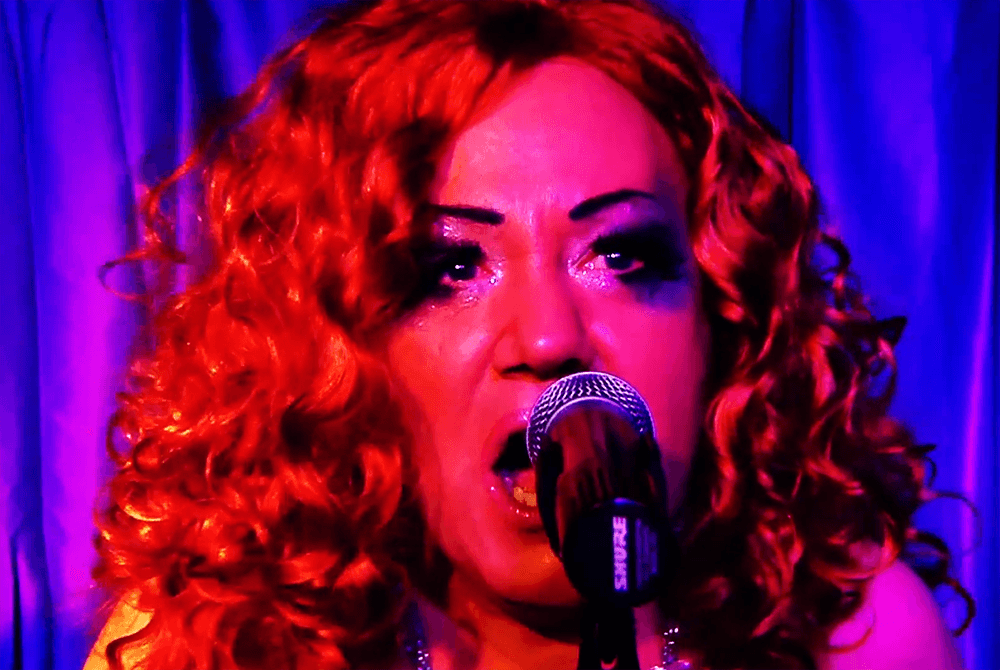 In any case, Spidarlings goes from scene to scene with little sense of momentum or direction to it, and random musical numbers that have little to do with the story line itself are interspersed here and there, as if they are providing some respite from the dreadfully amateurish acting.

The best musical numbers are provided by Jeff Kristian in the role of the drag queen “The Diva”, and you can tell he’s one actor in the film who has years of performing under his belt. He has actual stage presence in addition to a great voice. 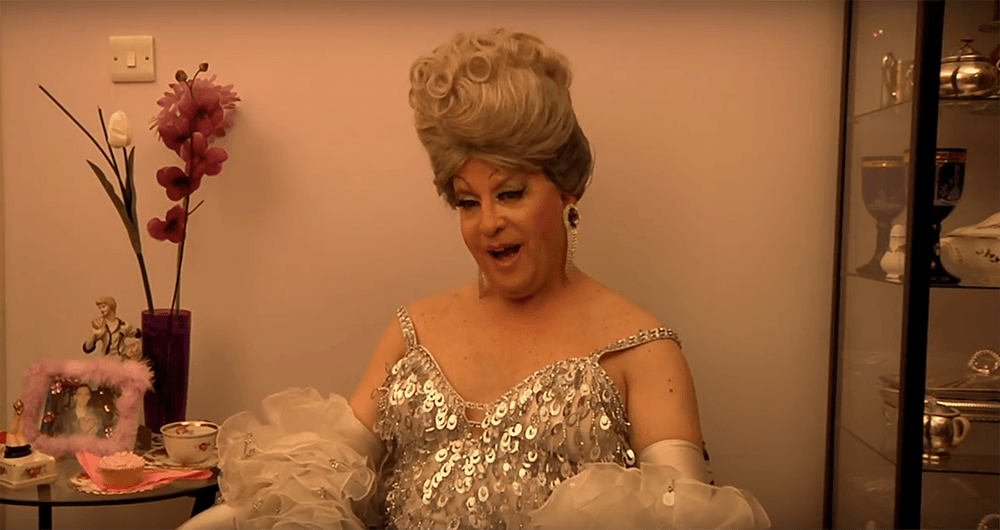 Another good performance is delivered by another drag queen named Gena (portrayed by long-time British drag queen Tiffaney Wells), who, like Kristian, knows how to deliver a song with some pizzazz. A decent musical number named “Kerching” is delivered by Matilda and Eden, and even though at times they aren’t even mouthing the words to the song, the number itself is interesting in its critique of capitalism (which in itself has nothing to do with the actual story, but rather was put in this film as a vehicle for the song rather than as a narrative device).

The remainder of the musical numbers are painful to watch and listen to, especially the ones performed by Lee Mark Jones as Ticks, a patron of Juicy Girls who is particularly interested in Matilda. The fault itself does not lie with Jones himself, as he is actually a musician who has been performing with bands for over forty years, but rather in Salem Kapsaski’s uninspired and generally inept direction. 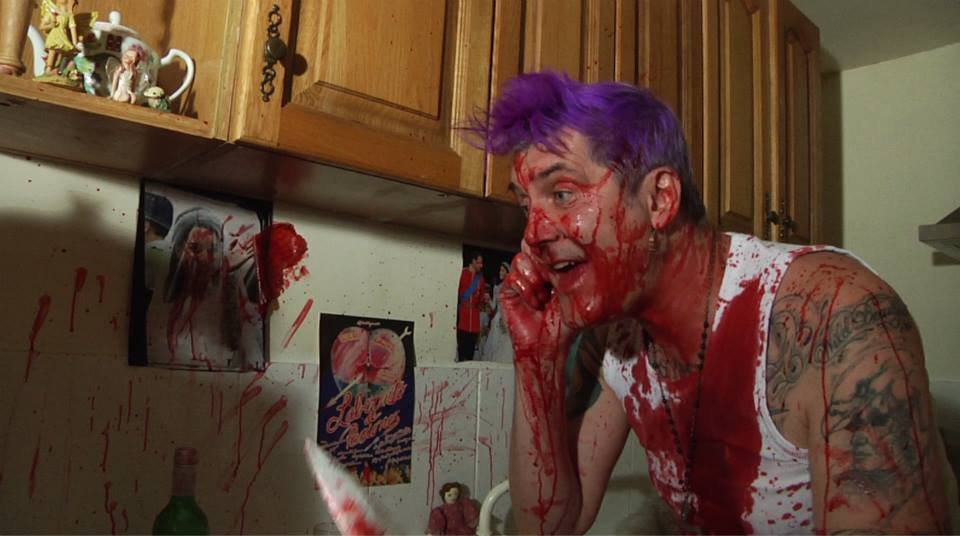 Kapsaski shoots Jones from primarily one static position, and tasks Jones with performing his lip-synced singing like a person aping into a steady webcam. Proper direction denotes the use of multiple shots shot from multiple positions, and once edited together, they can give the audience a sense of craft and momentum. Kapsaski generally fails in this respect, not only in Jones’ scenes, but throughout most of the film itself.

There are a few strange crudely animated scenes, one in the opening credits, one later on that depicts the death of Eden’s father, and another one in which Eden and a giant spider have sex with each other. That’s right…interspecies sexual relations. 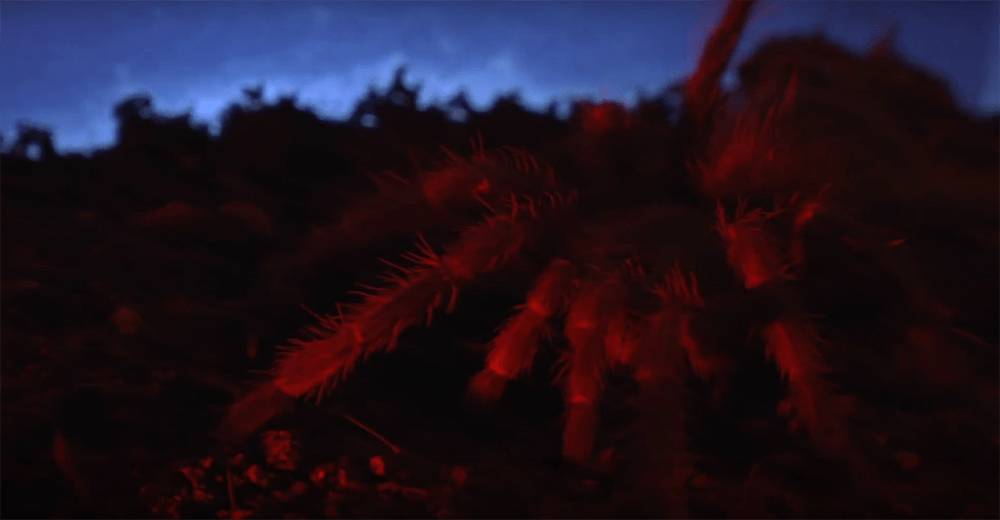 In an earlier (non-animated) scene, Eden and Matilda randomly purchase a tarantula (from a character portrayed by Troma studios co-founder Lloyd Kaufman himself) and take it home with them. Then, as I related, Eden and the spider seemingly have sex with one another, which eventually results in Eden giving birth to a cluster of spiders.

This birthing scene is not gruesome, nor does it involve any degree of special effects (save for the use of some fake blood and some groaning from Sophia Disgrace), and the spiders themselves are just an isolated shot of spiders crawling over one another. Evidently, if you plan on having children with a tarantula, expect to give birth to small white spiders, not large hairy tarantulas. Sorry if that runs counter to your preconceived notions of human-born tarantula children. 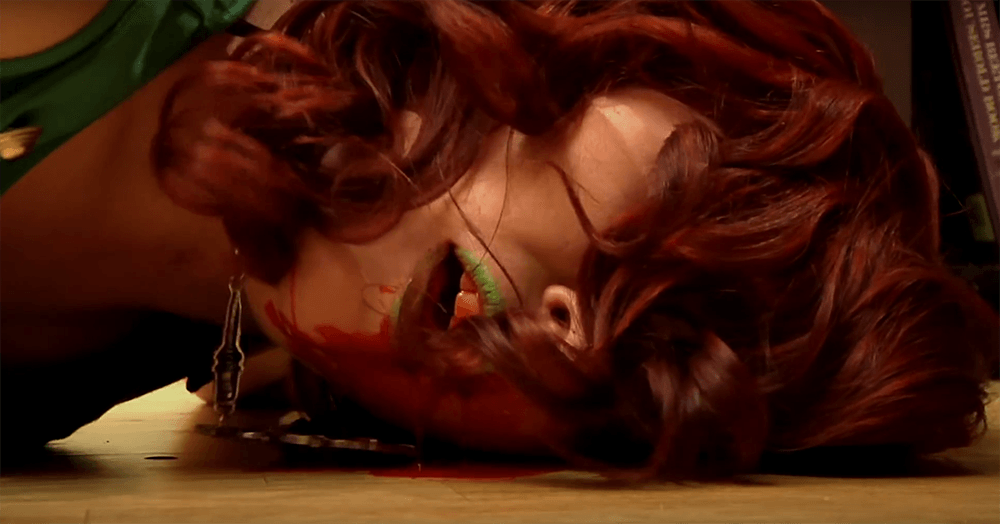 The most the film offers in the horror department are some amateur special effects in the form of a randomly-placed unrealistic and out-of-place scar on the landlord’s head, a strange broken penis with a drill bit coming out of it, and a fake-looking leg that gets chopped with an ax. In one scene it is implied that Ticks is killing a woman, who you never see on screen, but you do hear her screaming while he is covered in fake blood and is brandishing a bloody kitchen knife.

In many respects, it is puzzling why Ticks is revealed to be a murderer at all, as this reveal does nothing for the story, save for giving the film a chance to make good on its moniker of “horror-musical”.

Overall, the film gets low marks for…pretty much everything, save for some good musical numbers provided by Jeff Kristian. 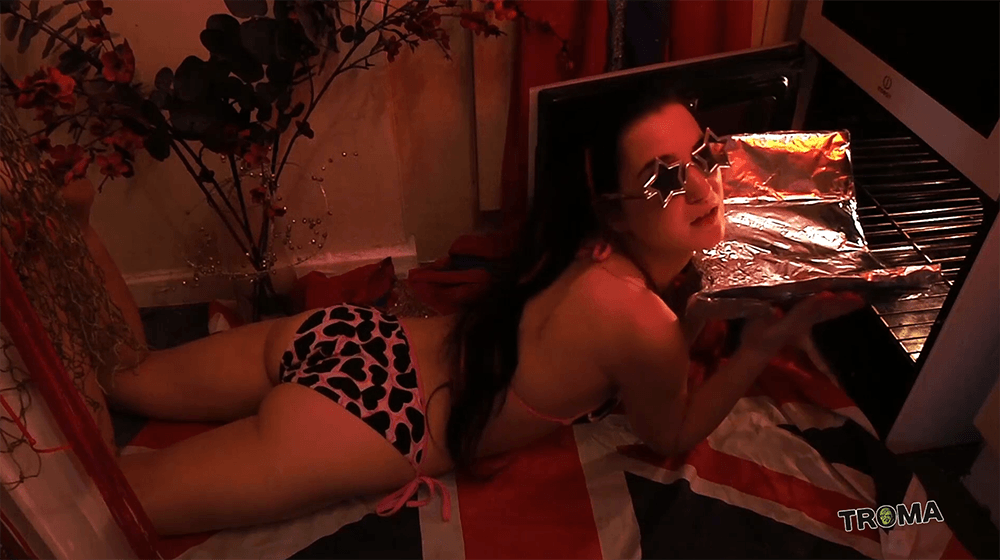 Perhaps one of the largest detriments to the film was the performance of Rahel Kapsaski, who probably got the lead role because she is the director’s sister, but it seems that English is not her primary language. As a result, much of her dialogue is difficult to understand.

Also, it does not appear that Rahel is comfortable in front of the camera, as she squints and cringes her way through scenes, as if she is trying to hide in plain sight, both craving the spotlight, but not knowing what to do with it once she gets it.

Sophia Disgrace, our other lead, is also not a good actress. Instead of exhibiting actual acting ability, she instead dons an expression of apathy as her primary emotional state, as if playing a “bad girl” (complete with the requisite facial piercings and body tattoos) will suffice for acting itself.

Perhaps the film’s largest drawback is the fact that it is just over two hours long! About a half hour into watching the film, I hovered my cursor over the time bar and was shocked to discover how much of the film I had left to watch — it hardly seemed possible. In all respects, Spidarlings should occupy no more than eighty or so minutes. It would have been far more entertaining if music was its primary engine, as the acting caused it to sputter and break down by the side of the road.

Want a second opinion? Click here for an alternate take on Spidarlings.