A shipwreck survivor’s tale of perseverance and self-determination, “Sweetheart” is a tried and true creature feature with a fresh social message. 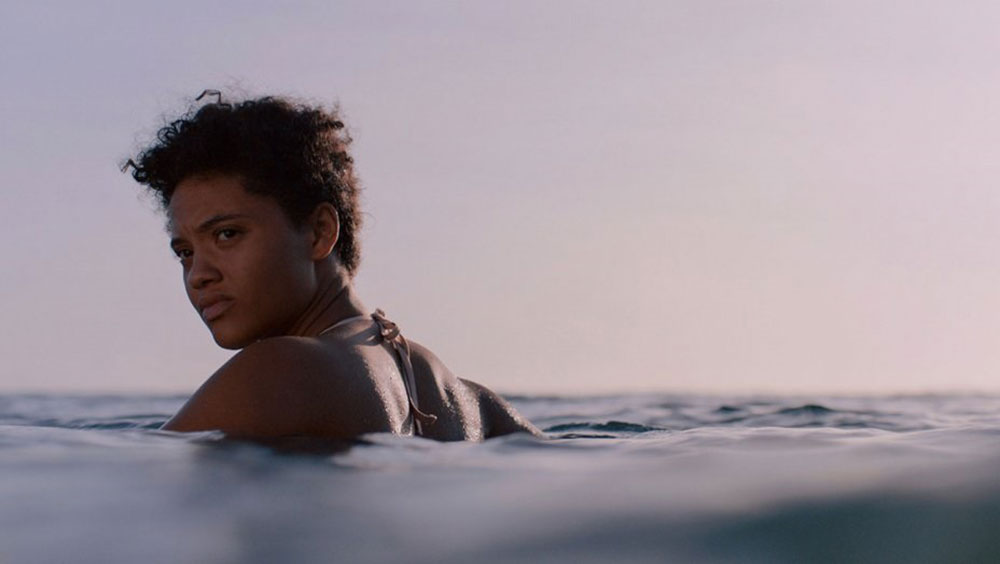 Terror in paradise is by no means a novel concept. The stark contrast between an ideal world and a dark reality can truly enhance feelings of unease. In J.D. Dillard’s Sweetheart, the contrast not only serves to menace its protagonist, but illustrates a broader point about the dangerous forces that can hide behind a façade of normalcy.  Sparkling waters, balmy air, shady palms, and warm white sands can only mask the ugliness, rot, and violence that lurks beneath the surface for so long.

Jenn Remming (Kiersey Clemons) finds herself marooned on a tropical island after a boat trip with friends is disastrously disrupted by a powerful storm. The film opens as a terrified and disoriented Jenn washes ashore, accompanied by one of her dying companions, Brad (Benedict Samuel).

It’s not long before she realizes that she may be utterly alone on a deserted island the size of a small neighborhood.

As Jenn gets her bearings and figures her next move, she begins to find traces of previous inhabitants, as well as some unsettling clues that she may not be as alone as she thought.

After a few relatively uneventful nights, Jenn finally comes face to face with the island’s secret resident: the bloodthirsty monster that emerges from the ocean at night and prowls the island to feed. Jenn’s fight for survival take on a new urgency as she tries to outwit the creature, while simultaneously trying to figure out how to get off the island at any cost.

The film moves along slowly at first, offering only tidbits of back story that can make it challenging to sustain interest at times.

It is admittedly hard to carry an entire movie as the sole performer on screen, and even harder without dialogue to move the story forward. Clemons does a good job conveying Jenn’s inner thoughts and motives with body language and facial expressions, but it is not until her boyfriend, Lucas (Emory Cohen) and fellow stranded traveler, Mia (Hanna Mangan Lawrence), wash ashore in an emergency raft that Jenn’s story really begins to flesh out.

The conflict that arises between the characters as Jenn tries to convince the others that the open ocean would be a welcome alternative to the horrors of the island adds a whole new layer to the film, and it is here that director J.D. Dillard gets the opportunity to bring the deeper story to life.

Lucas and Mia immediately question the credibility of Jenn’s narrative about a malevolent sea monster (at times with a skepticism that is a bit heavy-handed), and decide that they would rather risk doubting her warnings than to abandon their newfound oasis (as it turns out, the title of the movie is a reference to the pet name Lucas calls Jenn when he is feeling especially condescending.)

With her incredulous friends now in the picture, Jenn’s fight for survival turns into to a battle to simply be heard.

It’s a scenario that will seem infuriatingly familiar to many viewers who know exactly what it feels like to have their fears and struggles dismissed.

It is no coincidence than Jenn is a black woman trying to communicate to her out-of-touch white friends about a dangerous problem that they cannot see. They respond with attempts to silence her, at one point going as far as to thwart her with physical restraints. As a result, Jenn is once again left to rely on her own wit, determination, and fortitude to fight for her survival.

The tone of the movie is occasionally difficult to pin down. At times it unfolds more like a mystery, introducing a slew of puzzling questions that never get fully addressed (Why was there a family happily vacationing on a remote island? Where did all the blood on the raft come from?)

Where the movie does excel is at creating tension, both primal and interpersonal.

Its villain is uniquely sinister yet realistic, almost leaving the impression that it could plausibly exist in some ocean abyss somewhere (extra props to the filmmakers for not relying solely on computer generated effects, which helps make the monster frighteningly lifelike.)

There were some missed opportunities, and I wonder how the film would have played out if more of the short 82-minute runtime had been spent developing the dynamics between the island’s human characters. The second act of the film seems rushed, while the first half tends to drag, as it takes its time illustrating how Jenn gradually adapts to her surroundings.

While the development of her sharp survival skills sets up a clear contrast to how her friends seem to view her later in the movie, it does so at the expense of the second act, which is the essential part in unfurling the film’s primary message.

Regardless of its occasional awkwardness, the overall story is important. It demonstrates how the inclusion of the oft overlooked fears and frustrations of marginalized people are fertile grounds for effective horror, and gives us a glimpse into how everyone benefits when those voices are no longer sidelined.