The new horror-comedy “The Passenger” is a wacky, bloody, wonderfully gory trip — a love letter to monster movies and a damn worthwhile ride. 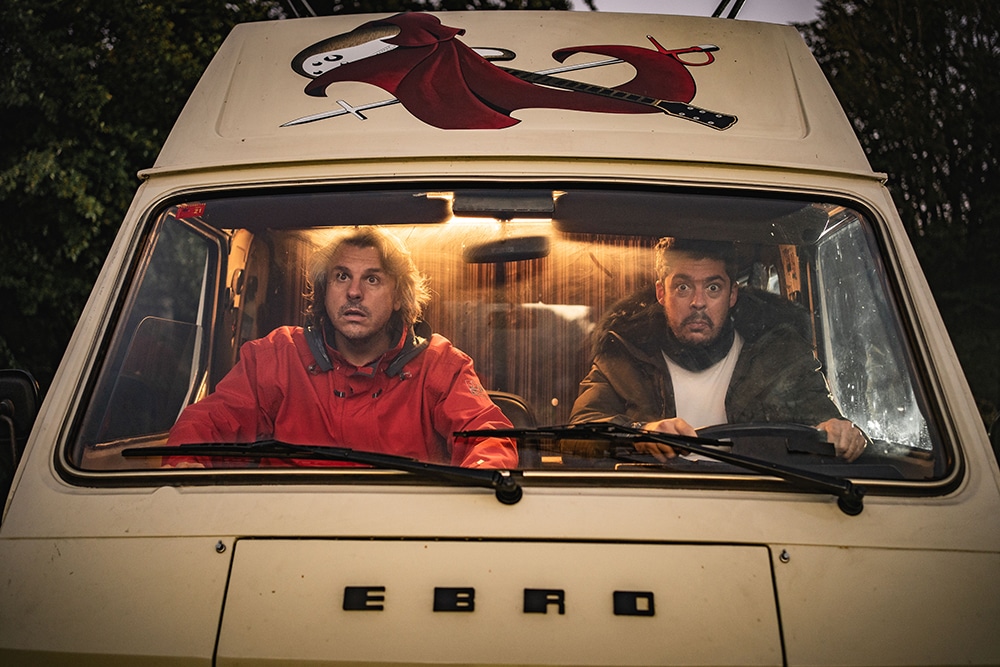 Some horror movies are destined for recognition and acclaim, like 1992’s The Silence of the Lambs. Other films take the offbeat path, like 2010’s carnage confection that was Alexandre Aja’s outrageous Piranha 3D.

The 2021 gross-out comedy-horror La Pasajera (aka The Passenger) definitely falls into the camp of the latter, eschewing class and good taste for something over the top and pulpy but with a true beating heart at its compromised center. Following in the tradition of splatter classics like Evil Dead II (1987) and Dead Alive (1992), there is a genuine soul ingrained deeply within the sinewy guts and severed limbs showcased.

Presented in a cast of small characters led by macho man Blasco (portrayed with a gritty yet playful intensity by actor Ramiro Blas, whose more mainstream appearances include 2018’s Uma Thurman led Down a Dark Hall as well as the fourth entry of the excellent found-footage [REC] franchise).

Blas portrays Carlos Blasco, a gruff and sarcastic ex-bull-fighter who works as a glorified Uber driver with a profile page characterizing him as a “…responsible driver, smoker and very talkative.”

Blasco is tasked with transporting three women from point A to B, and along the way has no qualms in sharing his viewpoints on religion, the pervasiveness of technology in contemporary culture as well as the government interference that comes with it.

His interactions and chemistry (or lack thereof) with these individual women are what provide a large amount of intrigue and amusement and a fair amount of investment before arriving at the bloody show. 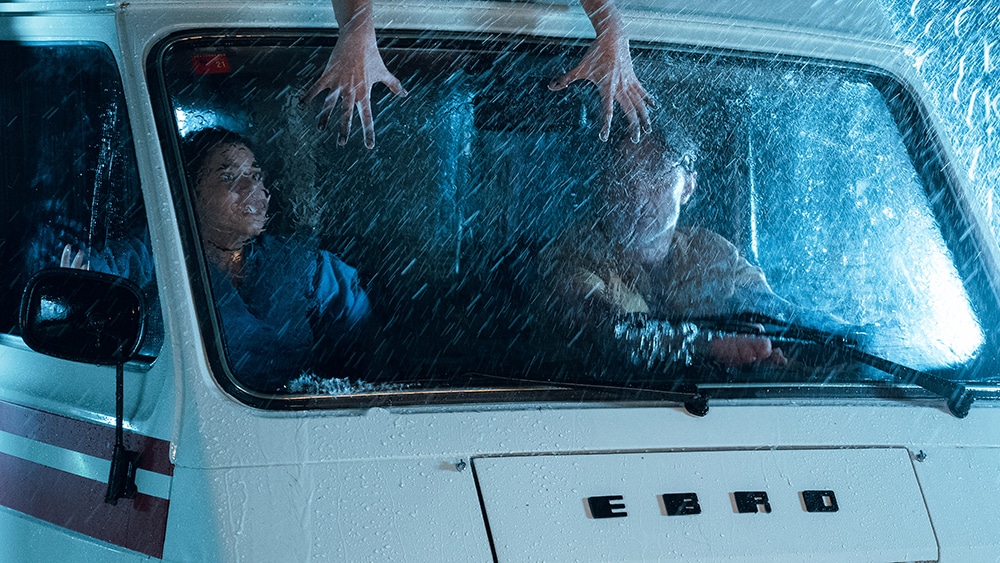 Blasco first picks up the mysterious dark-haired Mariela, who is then joined by mother and daughter Lidia & Marta.

All three women appear reserved and a bit uppity from the get-go, and Blasco wastes no time in using his motor-mouth to cut through the tension, offering up little tidbits to the women (as well as the viewers) about himself, such as the fact that he was born on Christmas and suitably assigned the nickname Nativity Child’.

The adults — Mariela and Lidia — are not as willing as teenager Marta to humor Blasco in making small (or large) talk.

While this dynamic between these two initially presents Marta as an object of desire for the somewhat smarmy Blasco, it does not take too long for their rapport to evolve into a rather endearing father-daughter relationship which forms the true emotional core of the storyline. This is sooner rather than later complicated by the appearance of an uninvited passenger.

The monster of this film is a blobby amorphous mess that infects anything it latches onto and turns its victims into the kind of nightmare fuel that has permeated the audience’s subconscious ever since the likes of John Carpenter’s The Thing reared its melting heads back in 1982.

The mayhem forces the movie’s small cast of characters to think fast and make hard decisions with lasting consequences.

It is all too rare for a horror movie to acknowledge the gravity of a situation, and The Passenger pulls no punches in this regard. 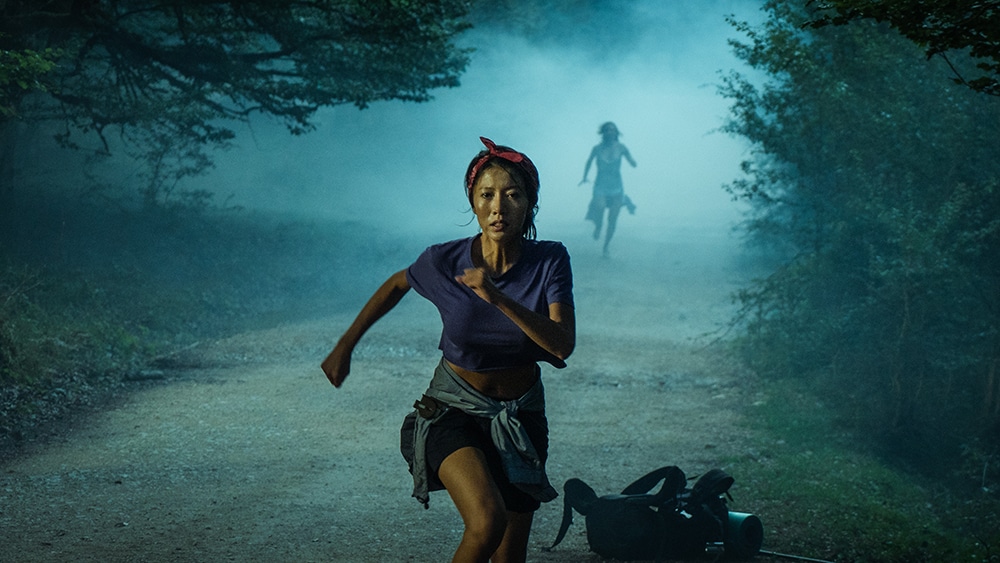 Equally savage in its approach to on-screen violence, the staging and practical effects are wonderfully grotesque, with a particularly memorable set-piece involving a character helplessly and horrifyingly falling victim to this film’s seemingly unstoppable monster.

Characters are outfitted in vibrant and contrasting colors, with the lighting of the movie complimenting this vivid scheme. Red, blues, and greens are most on show….with the color red receiving special consideration.

The pacing and editing are also of special note. Stylish techniques are employed (split-diopters, rack focus, close-ups of expressive eyes as well as some stunning birds-eye views of the gorgeous terrains of Navarre, Spain where the movie was shot) which lend the film a distinct visual language that pays homage to the crafty low-budget 70s horror drive-in flicks that likely serve as inspiration.

In the end, THE PASSENGER is a near-perfect diversion and an excellent showcase of the kind of throwback grindhouse fun that used to permeate horror flicks decades ago.

There is no obvious CGI here or attempts at forced social commentary that contemporary ‘elevated horror’ sometimes falls into the trap of. 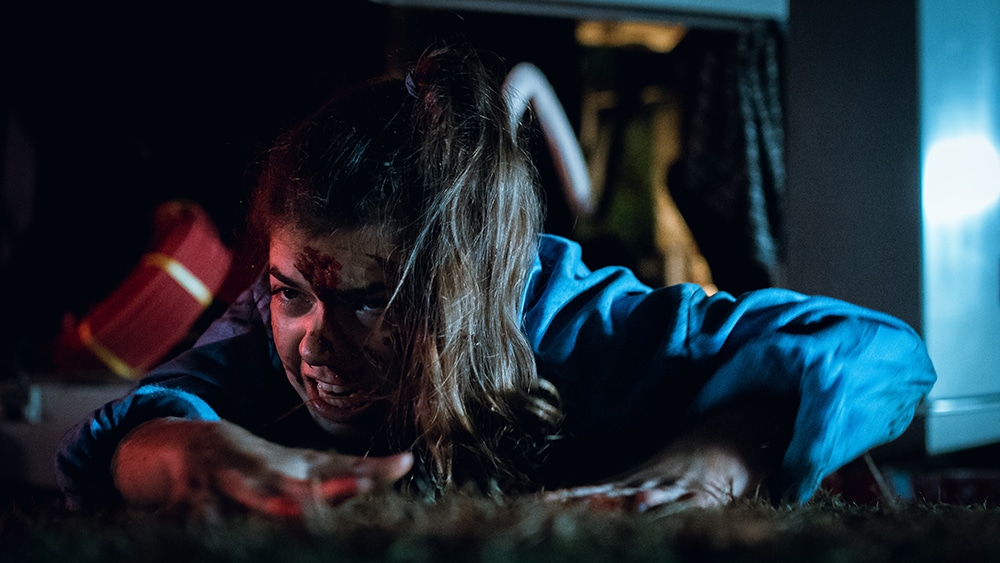 Instead, the wheels are strong on this, and they carry a straightforward and extremely engaging horror yarn.

The Passenger has a unique power to both disgust and encourage its audience into thinking and caring for the plights of others and their inner battles (scars and trauma lurking deep under the surface).

The comedic slant that the movie takes will likely be a turn off for some, but others who don’t mind laughing along with the screams will find that The Passenger arrives at its destination with flair, care, and an extremely potent adoration for monster movies and as well as the audience who grew up watching and loving them.

Blasco gets a driver score of 3.5 out of 5… and I would surely ride with him again.

The Passenger is in theaters now and arrives on demand and on DVD on June 28, 2022.

Rob is currently a student majoring in Social Work who learned just about everything he knows from watching movies. He can also name all 144 episodes of “Buffy the Vampire Slayer” at the top of his head. Read Full
More posts by the Author »