Bloody Muscle Body Builder in Hell is a blood splattered horror comedy out of Japan that lifts a heavy dose of inspiration from The Evil Dead. 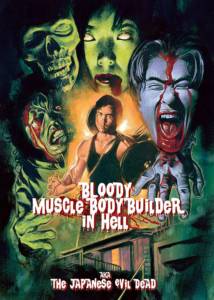 During his daily workout, Shinji (Shinichi Fukazawa) receives an unexpected phone call from his ex-girlfriend (Asako Nosaka). She is a photojournalist in the process of researching the paranormal. Remembering a photograph he had shown her when they were dating, she asks if she can see the photo once more; the facade of an old property previously owned by Shinji’s father before his death.

Further photo documentation from within the house would really help with her research… Shinji agrees. The two reunite and arrange to visit the old abandoned property, accompanied by a professional psychic (Masaaki Kai). 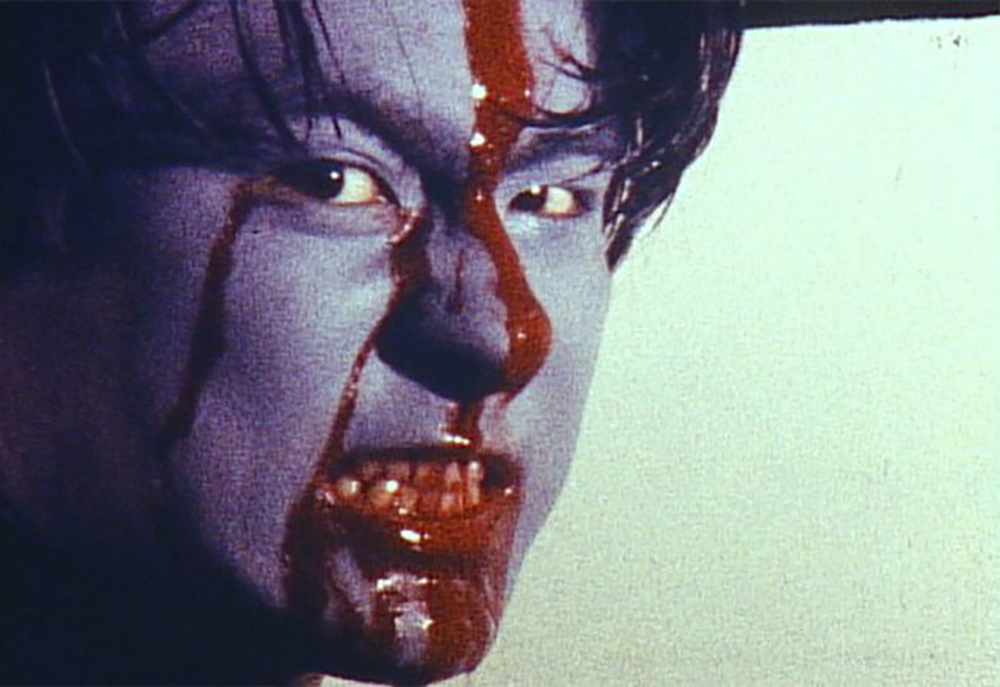 But this house harbors a dark, blood-soaked secret. Once inside, they will discover hell, as they find themselves tormented by a relentless ghost with a 30-year grudge.

Inspired by the Evil Dead films, Shinichi Fukazawa started writing Bloody Muscle Bodybuilder In Hell on New Year’s Day in 1995. Beginning production soon after, Shinichi shot 10 hours of footage over the next 10 years using 8mm film. Editing of the film started in 2005. But due to several issues in post-production, it took another 4 years before the film was finally completed in 2009.

Bloody Muscle Body Builder in Hell wears the references to Sam Raimi’s The Evil Dead (1981) on its sleeve  — from the visual camerawork to the slapstick comedy and over-the-top gore — which is why it is often referred to as “The Japanese Evil Dead”. 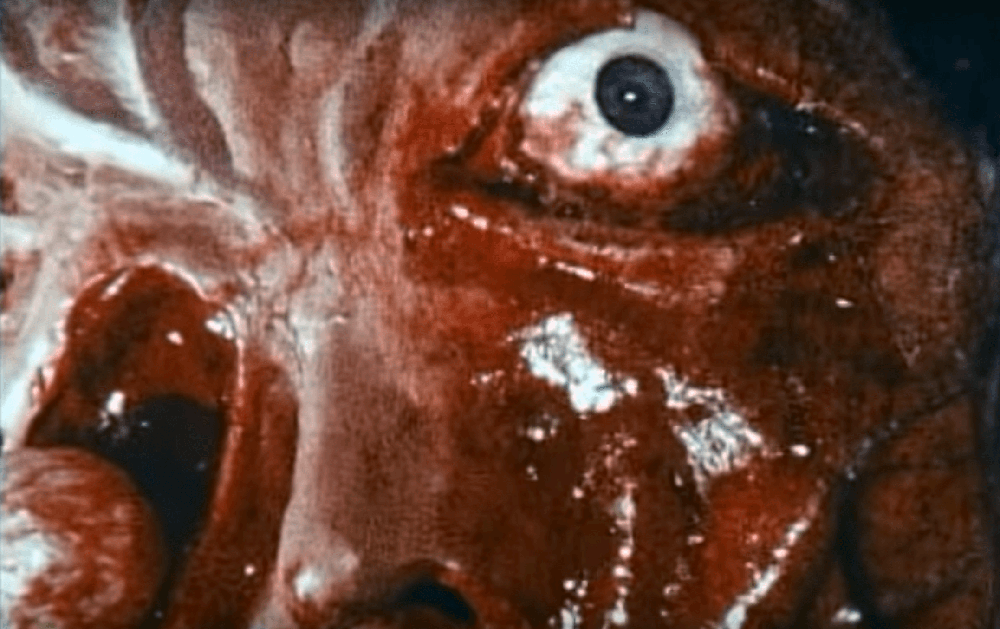 Although Shinichi admits to being heavily inspired by The Evil Dead, anyone expecting this to be a Japanese version of that film may be disappointed. To be fair, this is nowhere near as polished as Raimi’s cult  horror classic. The film is best approached with a low expectations and the intent to just enjoy a bloody good time.

This is The Evil Dead (a low budget film itself) on a budget, with some of the J-horror elements thrown in to incorporate the unique Asian feel.

The highlights of BLOODY MUSCLE BODY BUILDER IN HELL are start-stop motion effects, which are well executed despite the limited budget. It may still look like plasticine being molded together, but it still looks more realistic than most CGI — and a lot more entertaining. The other special effects in the film, especially in the final confrontation, reminded me of the homemade constructions which Peter Jackson created for his debut feature “Bad Taste” (1987). 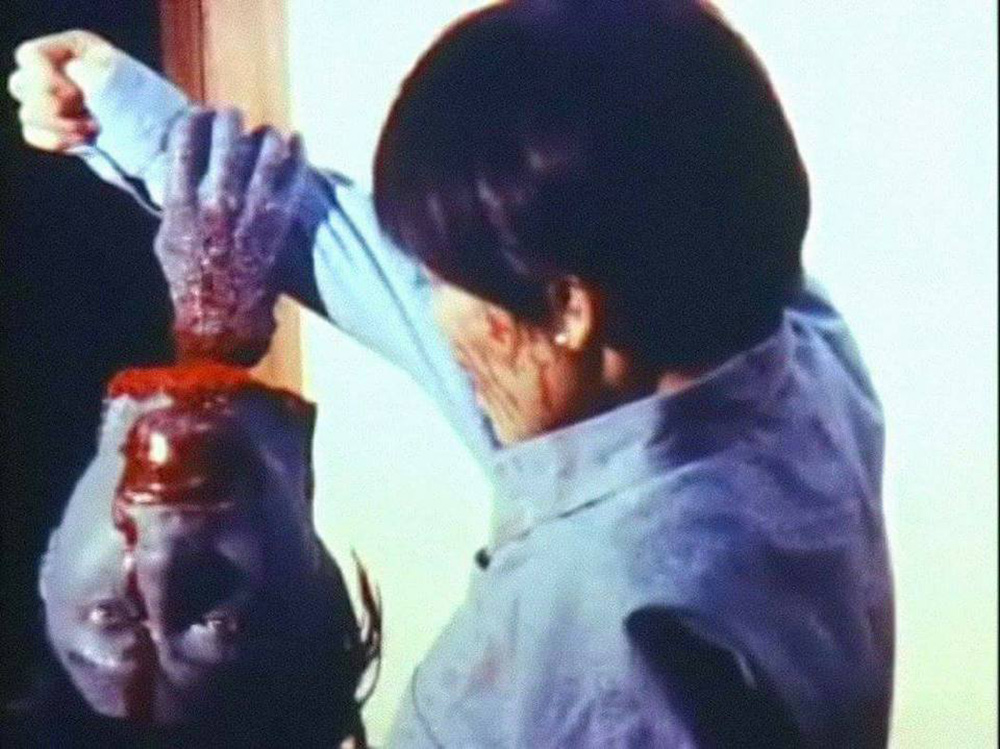 There are some digital effects, which were added to the film during post production. The quality of these effects are as good as the opening, which look as though they were developed for a Master System II game. It is brilliantly funny, but I am still not sure if that was meant as a joke or an early attempt at digital enhancement during editing. Either way, it makes for pure entertainment.

The look of the film works to its advantage, with the grainy VHS quality of the picture giving it a natural retro feel. Additionally, the delay in its release managed to work to the film’s advantage. Had it been released in the 90s, it probably would have disappeared into obscurity. But with the current nostalgia for the 80s, Bloody Muscle Bodybuilder In Hell fits perfectly with the current trend and has developed a strong cult following. 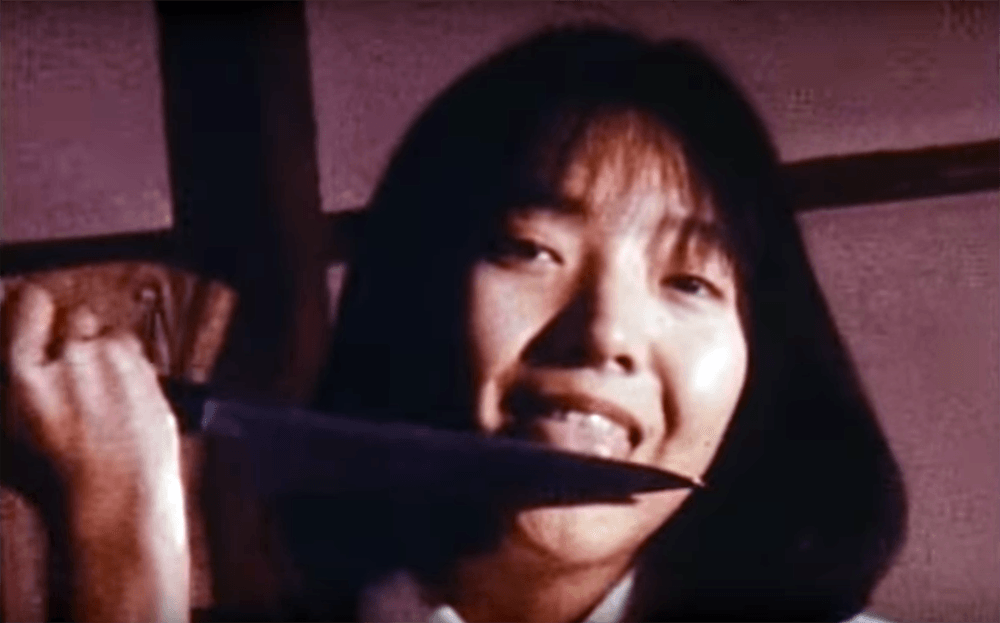 The acting in the film is surprisingly good, with Shinichi and Masaaki working well together with a natural chemistry. Masaaki looks like he is having the most fun, giving an exuberant performance and continuing to maintain the humor even when he is hacked up to pieces with an axe.

A fun movie filled with tongue and cheek humor, the film runs in at a relatively short 62 minutes for a feature, although it is packed full of splatter blood, action, and some creative ideas.

It may not be a perfect movie, but you can appreciate the effort which has gone into making the film. Having taken 14 years to complete, it is surprising that the film managed to get released — but it just shows how a lot of perseverance can pay off in the end.