Lukas Feigelfeld’s directorial debut is an atmospheric medieval horror story about a would-be witch that starts strong but loses its way in the final act. 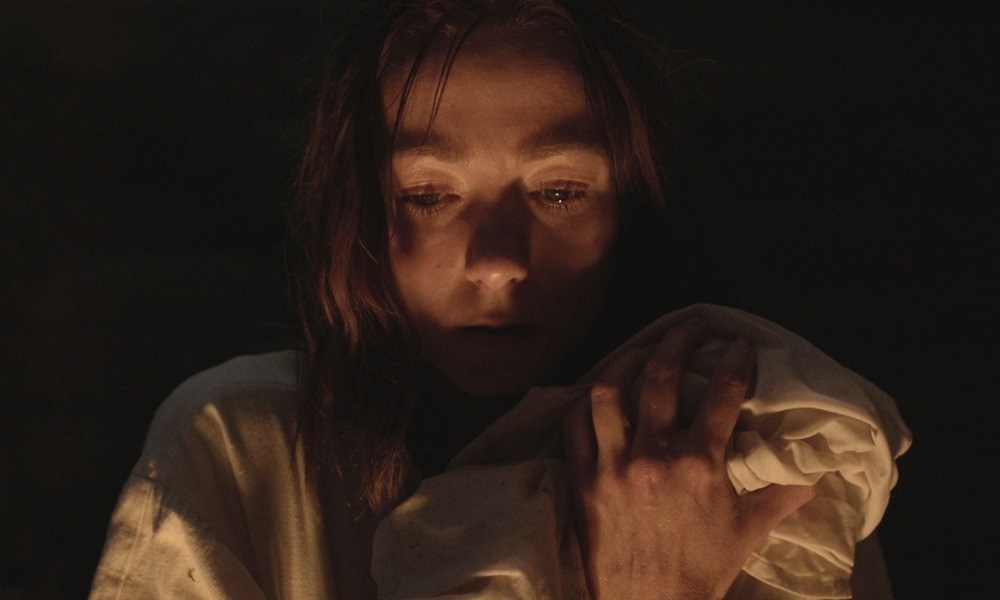 In 2017, Hagazussa made the rounds of the festival circuit, amid much praise and comparisons to Robert Eggers’ The Witch. On April 23 it finally became available to widespread audiences online. In many respects, it manages to live up to its reputation.

The haunting atmosphere, the visual storytelling, and the slow-burn horror are what makes the film as compelling as it is.

It’s clear how director Lukas Feigelfeld wants to get his story across, and he almost succeeds. But he fails to form a narrative cohesive enough to carry the story through to the end, and things become hopelessly disjointed in the final act.

Ultimately, Hagazussa is a hugely promising film that falls just short of its lofty ambitions. 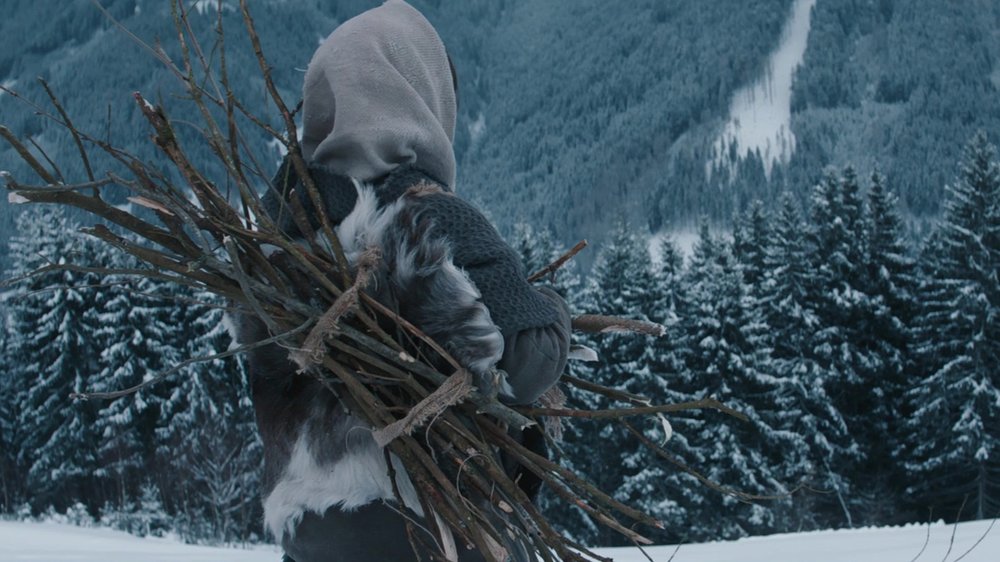 The story is about Albrun, a woman who probably isn’t a witch but has been labeled one. When we first meet her, she is a child living with her mother in the snowy wilderness of the Austrian Alps. The treacherous mountain landscape adds to the sense of isolation, furthered by the pair’s few but telling interactions with people from the nearby village. Then Alburn’s mother falls ill and dies violently, the first of many traumatic experiences that shape her eventual breakdown.

When we next meet Albrun, she is a mother, raising her infant daughter in the very same cabin where she grew up. The stigma of single motherhood — something that 21st Century women still have to contend with and was certainly a red flag for would-be witch hunters in even more unforgiving times — only enhances Albrun’s inherited otherness. While she keeps her head down and tries to make a living for her child and herself, she is continually ostracized and tormented.

Here, the film briefly seems like it might take an unexpected route: when Swinda tells Albrun, “We don’t have to hide here,” I thought the story might explore the dangers of being queer in a small-minded, superstitious world. But that is not the story Feigelfeld wants to tell. Unfortunately, Swinda’s intentions are nefarious. She lures Albrun into a false friendship only to have her raped as punishment for her perceived crimes — for her otherness.

There is a lot to be said for horror as a medium to express female trauma, and it’s clear that Feigelfeld has taken care to present his story empathically and respectfully.

It never feels exploitative. Albrun’s rape is not visually graphic, and instead the brief scene focuses on expressing the psychological and emotional horror of the act. Still, as a rape-revenge narrative, the film doesn’t fully deliver. Albrun avenges herself by contaminating the village water supply, but she is only given a very brief moment of satisfaction at seeing the fruits of her vengeance before the film splinters off into what feels like an entirely different narrative.

The last twenty minutes or so act almost as a separate, standalone short tacked onto the end of an unrelated story. The first story — of a woman who is ostracized and raped, and then takes revenge — is complete, even if the payoff is underwhelming. The rest of the film is about a woman who consumes toxic forest mushrooms and goes on a very bad trip. We follow Albrun on a psychedelic fever dream that culminates in disaster.

While Feigelfeld uses recurring visual themes in an attempt to tie the final act to the rest of the narrative, I still couldn’t help feeling we had taken a wrong turn somewhere down the road. Whether the final events are the result of Albrun’s PTSD or just the lingering effects of the shrooms is up to the viewer to decide. But given that the film’s primary driving force was supposed to be Albrun’s trauma, it’s disappointing that the climax is so unnecessarily muddled.

None of this is to say that Hagazussa is a bad film. 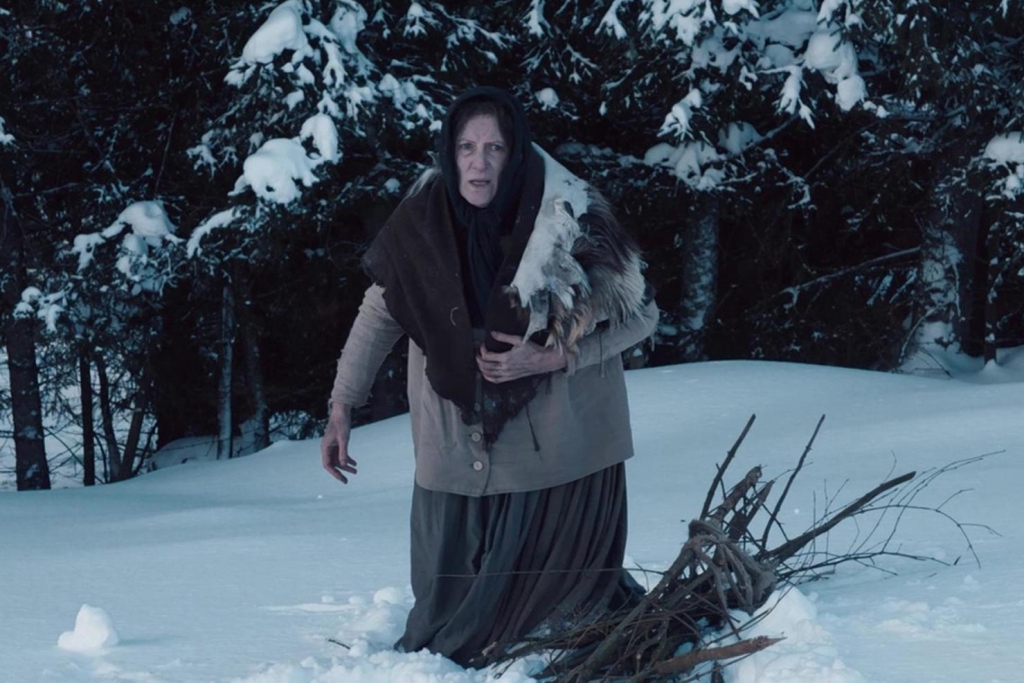 With its arthouse leanings and heavy reliance on aesthetics and visuals, a bit of murkiness in the plot could be forgiven if there was at least a meaningful ending. What’s meaningful about Albrun’s ending is hard to decipher. Is it simply the price she must pay for getting revenge on the villagers who her made her life miserable? It might have been nice to see her live out her years, feared but untouchable as the village “witch,” a mantle she would pass on to her daughter.

The narrative surrounding the film suggested that she would find personal empowerment and agency by reclaiming the insult that had been used to dehumanize her. She does, but only too briefly. The focus quickly shifts without allowing Albrun or the viewer a chance to appreciate her newfound confidence. In the end, Albrun becomes the agent of her own demise. 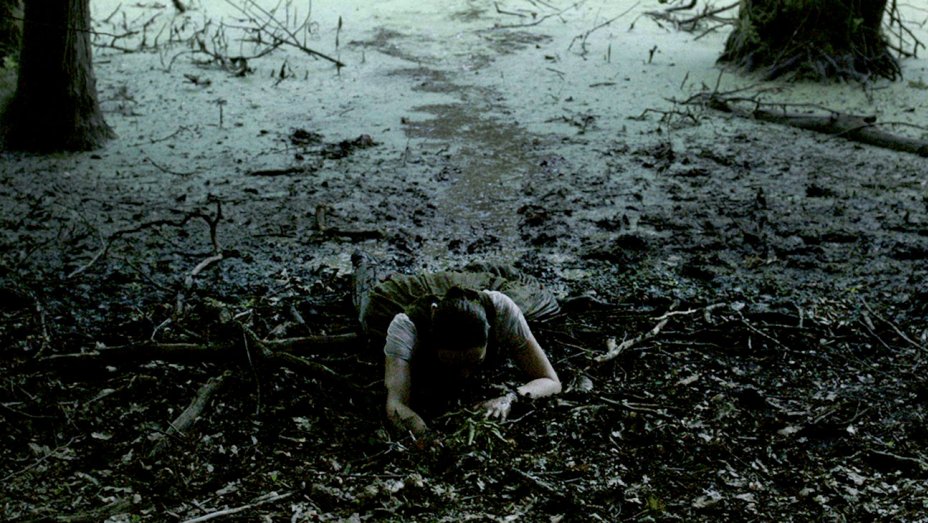 I want to end on a positive note, so let me say this: HAGAZUSSA is a visually stunning film. Much of the credit must go to cinematographer Mariel Baqueiro, but Feigelfeld’s background in photography shines through in his direction. He utilizes atmospheric landscape shots to give nature a life of her own; the forests and mountains are characters in their own right almost as much as Albrun is. His camera works beautifully in tandem with Aleksandra Cwen’s subtle acting, allowing them to convey much of Albrun’s story without relying heavily on dialogue or action.

This film has a lot going for it. It might not have blown me away like I wanted, but it does show that Feigelfeld has lot of promise. He has the potential to be a very effective genre presence and, despite my reservations about his debut, I’m anxious to see what he does next.