Loaded with guts and gore, Mask of Thorn is an 80s inspired throwback, teleporting us all the way back to the golden age of horror. 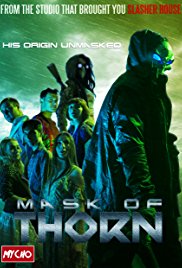 The Mycho Entertainment group is back at it again with their sixth installment in the Mychoverse and their seventh overall feature film. This is the second film showcasing the masked madman Thorn, a prequel to their 2014 slasher flick, Legacy of Thorn.

The film was written and directed by MJ Dixon, and produced by Anna Dixon. It stars Eve Kathryn Oliver, Sophie Bryant, Maria Lee Metheringham, and Atticus Machiavellian as the savage serial killer, Thorn.

A blast to the past, this 80’s homage will have you jumping out of your seat with excitement.

Once again, the micro-budget maestro MJ Dixon has blessed us with another Thorn film, this time digging up the past and giving us a further glimpse into the back story of the savage beast. At times humorous, MASK OF THORN is a blood drenched spectacle that doesn’t skimp out on practical gore. Brutally violent and beautifully bloody, this merciless slasher film is not to be taken lightly.

Bethany Lovell (Oliver) is coming of age, and nothing could be more important than celebrating her sweet sixteen. However, after being kidnapped by her friends and convinced to break into their school for a little drinking and fun, Bethany and company soon discover they’re not alone. Stalked by the malevolent creature known as Thorn, they must stave off their attacker until dawn, when the monster magically returns to whence he came.

There are some really inspiring things happening in this film. For one, the practical gore is on another level. With such a small budget, Dixon has yet again manipulated his surroundings — as only he could, using whatever was at his disposal — in order to pull off some truly remarkable and artistic kills.

In addition, the writing and dialogue continue to excel and ascend with each film Mycho creates.

The first film, Legacy of Thorn, was a tad difficult to follow and understand. However, that was not the case in Mask of Thorn. This time around the concepts were easier to pick up on, and the film felt smoother and more precise than its predecessor. I did feel that the dialogue could have been based more in the eighties though, containing more slang from that period, yet the film flowed with ease none the less.

The acting in this was leagues beyond that of the previous film. The marvelous performances given by the two lead actresses cause you to believe that they might actually be BFFs in real life. There was a natural chemistry between the two, and you could tell they were on the same wavelength, blissfully feeding off of each other. Eve Kathryn Oliver’s portrayal of Bethany Lovell was key, giving the audience the perfect good guy (or girl in this case) to bond with and root for.

The sets were great as usual, especially the school that was used, which gave the filmmakers plenty of room to maneuver and perfect their scenes. The lighting and use of shadowing was Mycho’s best yet, making it easier to conceal any simple flaws that might be produced otherwise. The cinematography was awe inspiring, as it always is with each film Dixon directs. The sound and score are a few of the things that Mycho does better than almost anyone.

The sound effects used for the character of Thorn is what really sells the scares and keeps you hungry for more. The sound bites gracefully set the mood, appropriately conveying the strength and brutality of the blood thirsty monster.

There were only a few things I didn’t like about the film, which subsequently boils down to an unfortunate lack of funding. The costumes were just, so-so. The wig used for the actor in the opening scene was comical and unfitting, and the use of a doll for the same sequence was good for a laugh. Also, there was one special effect problem that nipped at me, which I won’t spoil for potential viewers. However, I felt that that effect actually added to the old school throwback vibe the film aspired to.

I did feel that the film took a moment to find its stride, which wasn’t until the party scene inside the school. This is when I believe the film really began to take off and catch flight. Also, I was a bit displeased with the look of Thorn, as I felt it took a little force away from the character’s powerful aura.

Despite these few minor, insignificant flaws, there were some really breathtaking John Carpenter inspired elements in this film, which came together beautifully.

MASK OF THORN is an all-out slug fest. An instant cult classic. Fun as Hell. A machete straight to the gullet. Action packed from start to finish. Bloody, gruesome fun.

Overall, I give this film 2.5 out of 3 scratches for its stylized, 80s-infused throwback tropes.

In conclusion, MASK OF THORN is a sublimely, well threaded film. So, if you’re a huge slasher nerd and tired of the same old worn out icons, do yourself a favor and give this a run.

Thorn is the next biggest thing to hit the sub genre, and I, for one, can’t wait to see what happens next.

Click here to pre-order your copy of Mask of Thorn now.