Gloria Katz was a master screenwriter. And a total badass.

She and husband/creative partner Willard Huyck were deemed to be among “the hottest young writing talents in town, able to command eye-popping sums for their work,” by the New York Times in 1974.

Her uncredited work polishing George Lucas’ Star Wars script included making Princess Leia more like a real person. As she said at the time (per Vanity Fair), “she can take command; she doesn’t take any shit, but at the same time she’s vulnerable . . . instead of just a beautiful woman that schlepped along to be saved.”

And, maybe best of all, she didn’t type. She never even wanted to learn lest she be relegated to secretarial work. “I don’t type,” she told The Boston Globe in 1975. “Bill types and I talk.”

Hers was a career that included several mainstream highlights, beginning with Lucas’ American Graffiti, but it’s her very first credit that immediately came fondly to my mind after hearing Ms. Katz had sadly succumbed to ovarian cancer, age 76, on November 25.

That is Messiah of Evil (1973), a little-known, low budget wonder co-written and co-produced by the couple that even Ms. Katz didn’t seem to think much of: one obit notes she considered it “a real bowwow” and the rest of the world seems to have treated it accordingly. That’s a shame. It was the couple’s sole credit when Lucas, who’d been a classmate of Huyck’s at the University of Southern California, approached them to collaborate on American Graffiti, so he saw the potential early on.

What that’s worth today will of course vary according to your tolerance for Lucas’ post-original trilogy choices, but Messiah of Evil is well worth re-discovery; it’s nothing less than a phantasmagoria infused with Lovecraft, a bit of rural paranoia horror, and some near-psychedelic visuals.

Arletty (Marianna Hill), journeys to the appropriately-named coastal community of Point Dume (and yes, it’s a real place) to check in on her artist father, Joseph (Royal Dano, who you may know better as Judge Clinton Sternwood from a pair of Twin Peaks episodes, which is fitting given their shared milieu of small town weirdness). He’s been holed up in a beach house there and his letters to Arletty have grown increasingly strange and erratic, hinting at evil forces at work on the beach at night.

Long story short, it’s not all in his head and Arletty gets caught up in both her father’s disappearance and the machinations of a cult awaiting the appearance of a dark messiah from the sea. Along for the ride are libertine dandy Thom (Michael Greer) who’s in town to collect stories of the town’s dark past along with a pair of female companions, Toni (Joy Bang) and Laura (Anitra Ford).

Things unfold in a manner that recalls classic noir. Our protagonists don’t investigate and solve the mystery, they just get swept up and carried along by it until the denizens of Point Dume go from being merely odd to murderously frenzied.

In the interim, there’s not much in the way of incident but a languid pace serves the film’s nightmarish mood well. And those visuals: Joseph has decorated the beach house with ominous, expressionistic murals depicting the townspeople, their intense stares sear through the characters as they move through the space, an undeniable manifestation of the latent horror driving the narrative. The house provides shelter to the quartet of lead characters, but it never feels safe. 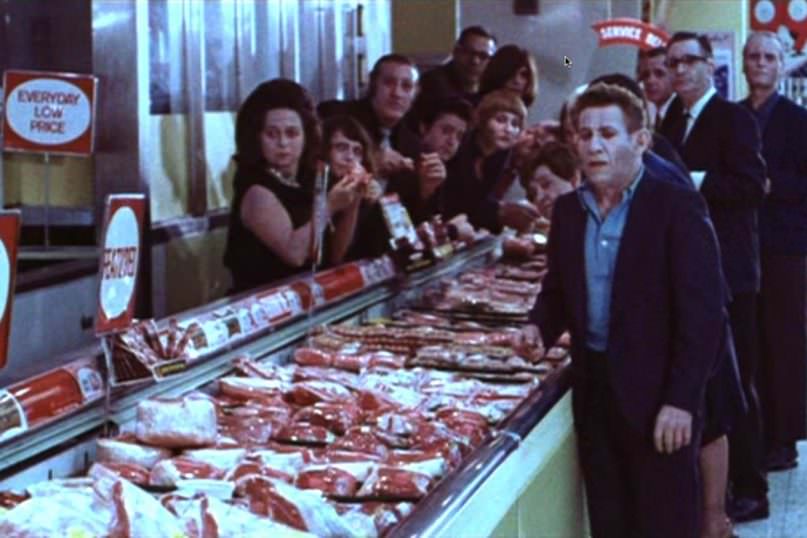 And rare is the horror film whose killings are visceral in their impact without depicting any actual viscera. Messiah stages a couple of these in ordinarily banal settings – a grocery store and a movie theatre – and the latter in particular is quietly terrifying in its execution.

In an interview from Code Red’s out-of-print 2009 Messiah DVD, Huyck admits to entirely pragmatic motives for making a horror film: investors were willing to fund one. That, and the aforementioned “bowwow” comment, point to an ambivalence toward the project that may account for some of its flaws – it does come to feel somewhat overlong, and a flashback explaining the dark messiah’s origins is clumsily executed.

Still, there’s more than enough to justify calling Messiah of Evil a lost masterpiece. See it all on YouTube.