A Cut Above The Rest: One Cut of The Dead

“One Cut of the Dead” delivers a resounding circumvention of audience expectations, with a charmingly goofy style that is all its own. 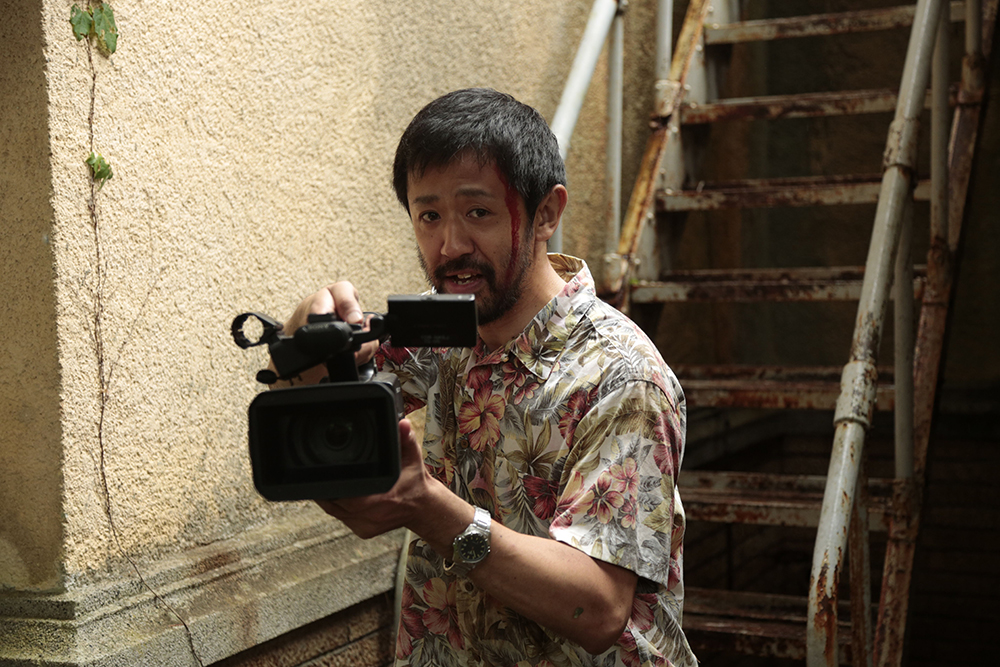 Confounding isn’t typically the desired first impression that most films set out to make. And yet it’s the only way to accurately describe One Cut of The Dead‘s opening 37-minute sequence. It feels amateurish, contrived, and seemingly represents the very bottom of the undead barrel.

And that’s the point of it.

Written and directed by Shin’ichirô Ueda, One Cut of The Dead opens on the set of a bare-bones budget zombie movie set within a decrepit WWII biological testing facility. The actors are subsequently attacked by ACTUAL zombies, to the film’s director delight as he believes it will elicit more authentic performances. The longer this seemingly inane opening sequence continues, the more the audience feels as if they’re the butt of an awkward joke. 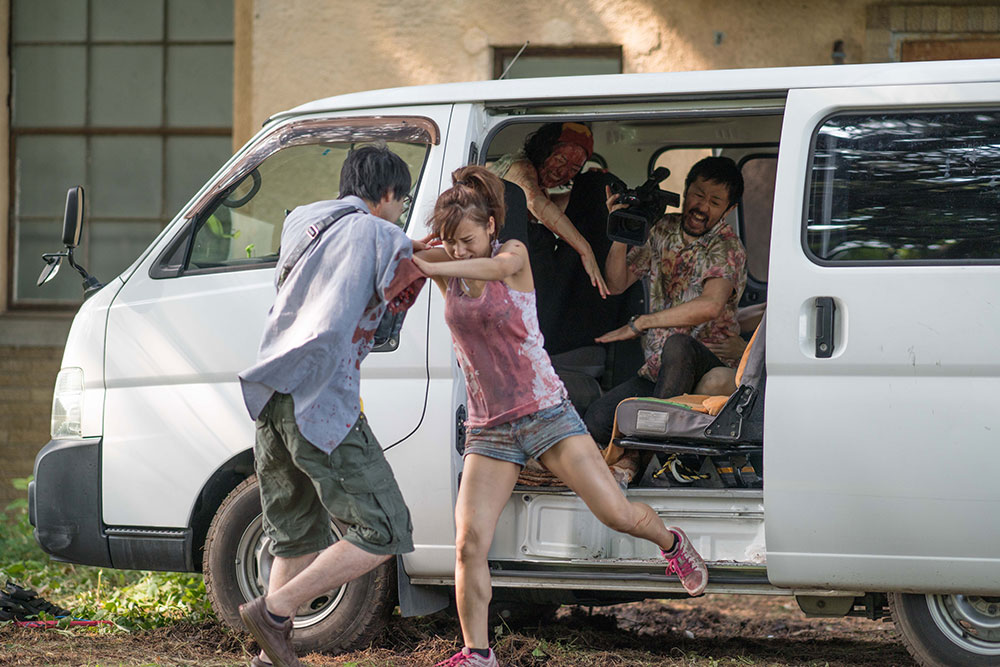 It all feels rather amateurish, with frequent dialogue pauses, random character actions, and laughably simplistic special effects. And, as we will learn, this is the entire point of the film.

This unbroken 37-minute sequence comes to a sudden end as the credits roll, and the audience learns that they’ve been watching yet another movie within a movie. Zombified Inception if you will.

And this is where the genre-defying nuances of One Cut of The Dead come to light. 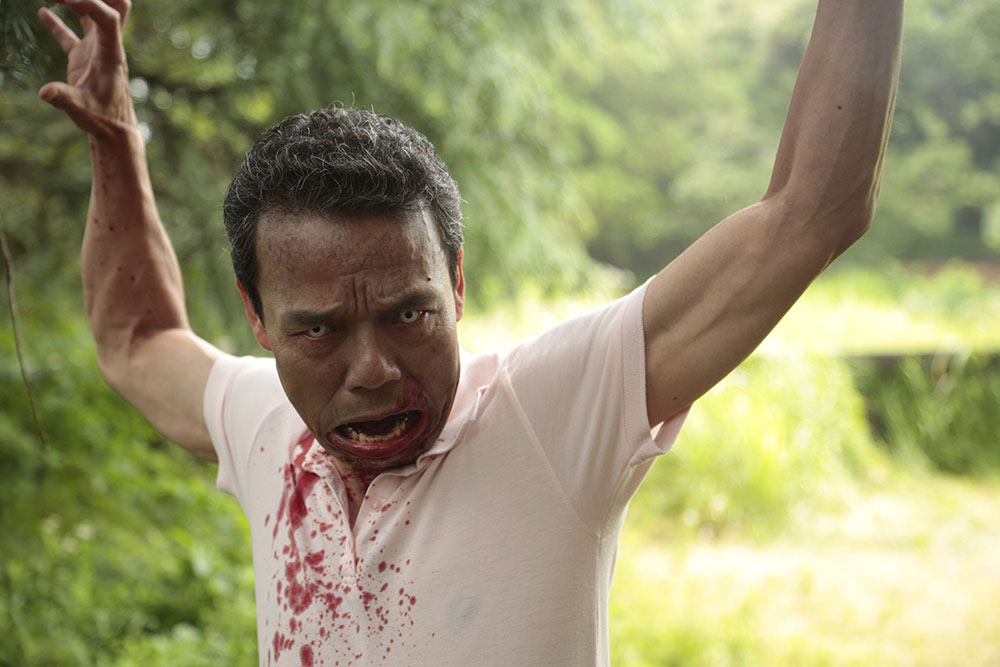 The remaining hour of the film completely shifts gears, rewinding the clock a month before the opening sequence was shot.

The tone of the film noticeably shifts from lo-fi horror to equal parts comedy and family drama. The audience is formally introduced to The Director (Takayuki Hamatsu) who’s hired to create a one-shot zombie film broadcasted in real-time. This means no mistakes, no reshoots, and no do-overs. Hilarity ensues at the expense of the ragtag band of filmmakers who attempt to achieve a seemingly impossible task.

This provides countless laughs but more importantly, it provides vital context for the film’s opening. 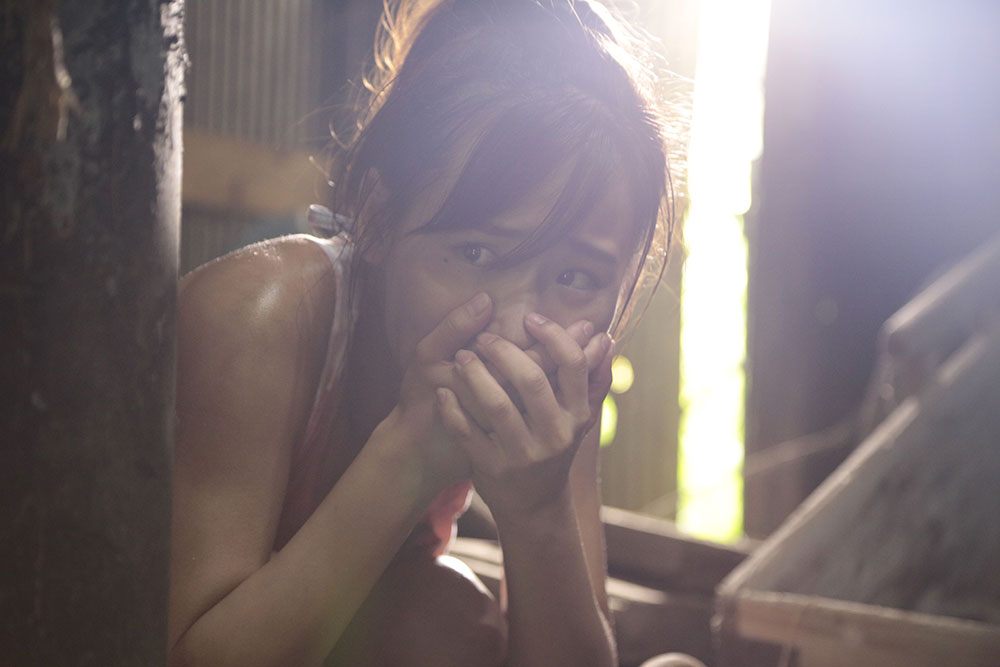 The audience is then given a first hand tour of the numerous and hilarious challenges that went into making this seemingly run of the mill zombie sequence.

We see first-hand how vital the jarring subversion of the audience’s expectations is to the entire experience. Being walked through the painstaking process that goes into every inch of making the film, from casting to rehearsal to how things continuously change at a moment’s notice.

This provides hilarious context for the opening chapter’s awkward and seemingly nonsensical moments, as the behind-the-scenes chaos is revealed.

At its core, One Cut of The Dead is a love letter to film making. 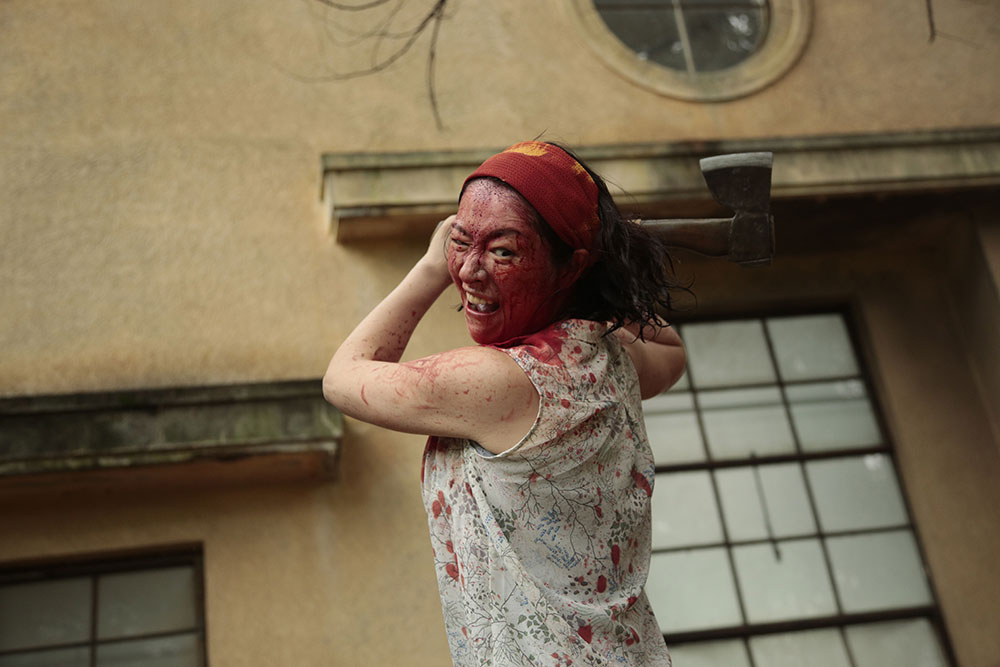 It illuminates that even the most seemingly mundane aspects of creating horror films are incredibly complicated and are always seconds away from disaster. It also provides a self-reflection of sorts, as it makes a point of impressing upon the viewer that no one sets out to make a bad movie.

And while One Cut of The Dead hurls numerous comedic hurdles at the crew’s expense, such as unimaginable production and casting snafus, the point remains: No one sets out to make a bad movie. 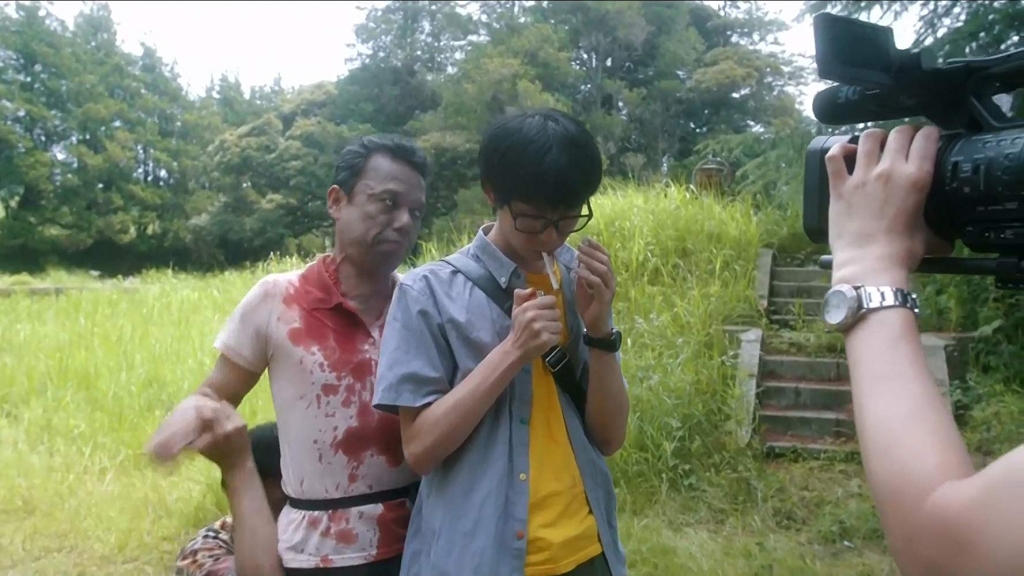 For every ill-conceived creative decision or poorly cast role, often those involved had the best of intentions. It’s a film that feels as if it was made specifically to defy those anyone who marches to the mantra that “it is easy to make a bad movie.”

Now after having spent the last hour learning the context for the film’s somewhat bizarre opening sequence, it only makes sense to go back and rewatch it. This proved to be both surreal and hilarious, as having the context behind each actor’s awkward pause or random dialogue choice made it far more enjoyable.

It’s quite an intense 37 minutes on a rewatch, given we’re watching systematic chaos unfold at every turn. 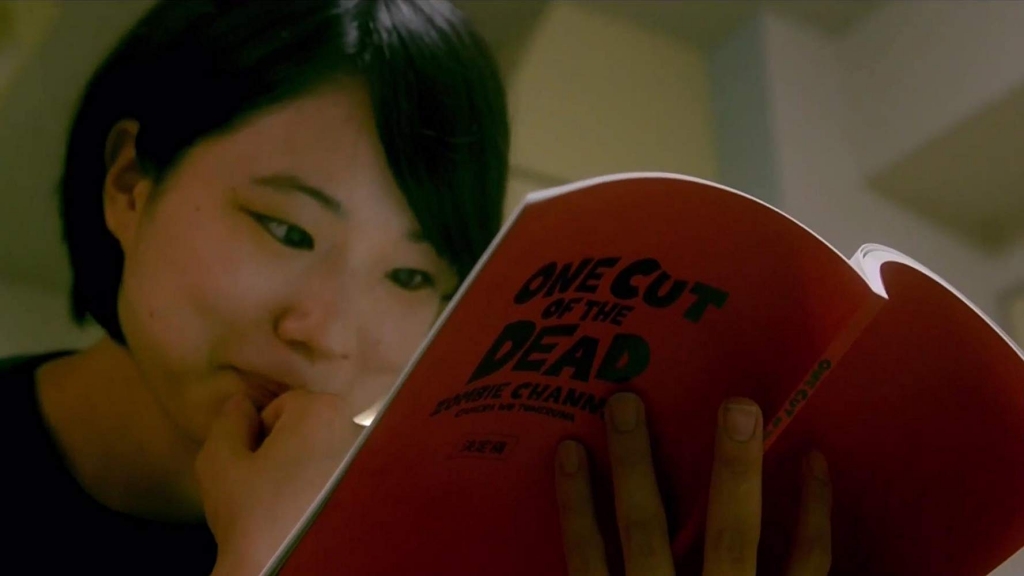 We’re also more invested in these characters after learning about the lengths they’ve gone to bring this zombie flick to life.

As One Cut of the Dead purposefully plays into its genre tropes, the idea that anyone watches it completely cold is relatively unrealistic. Unless you’re a hardcore horror fan, those not immediately entertained by its lo-fi beginning may abandon it long before experiencing its big — and rewarding — twist.

I find that all recommendations of One Cut of The Dead MUST contain a caveat or two to the effect of, “Stick with it! It’s going somewhere great!” 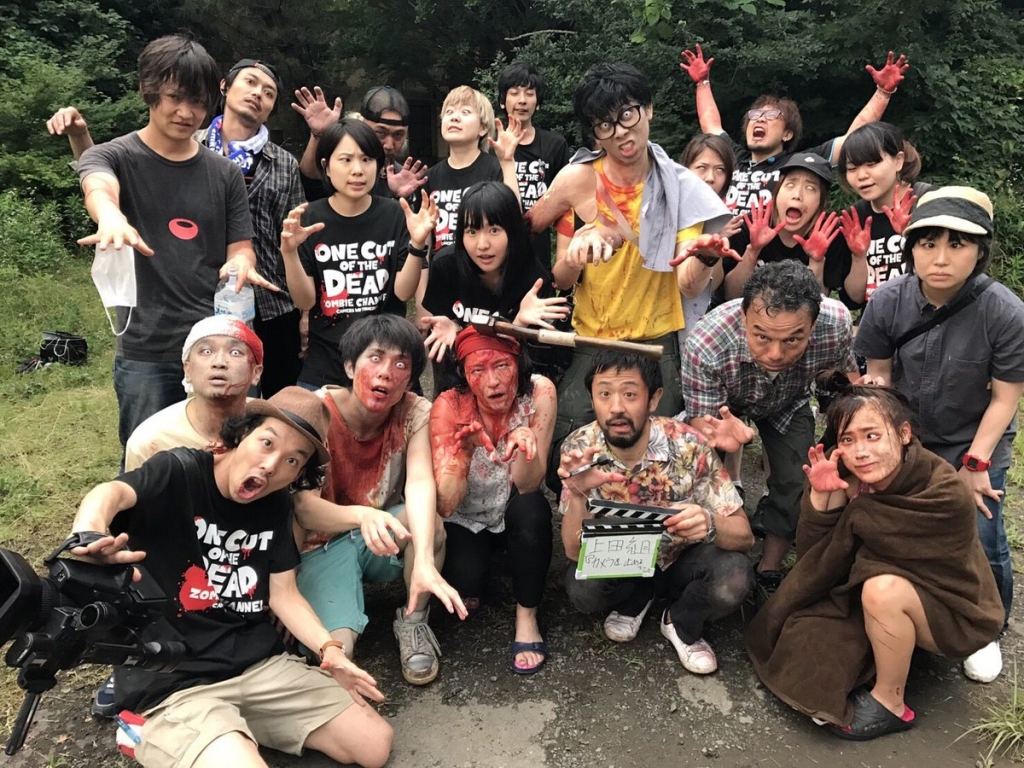 While a heads up may dispel some of the twist’s magic, I’d rather audiences know this is building to something terrific rather than them abandoning it altogether.

With ONE CUT OF THE DEAD, Shin’ichirô Ueda has meticulously crafted a genre-defying zombie comedy that is as hilarious as it is personable. It’s a reflection on filmmaking as a whole, while also serving as a love letter to an often dismissed genre.

This is a must watch for horror and zombie fans alike, while not completely alienating lesser fans of the genre.

One Cut of the Dead is now available to watch on Shudder.