“Yakuza Princess” is a modern-day samurai tale burdened by an identity crisis, steeped in potential but falling just short of greatness. 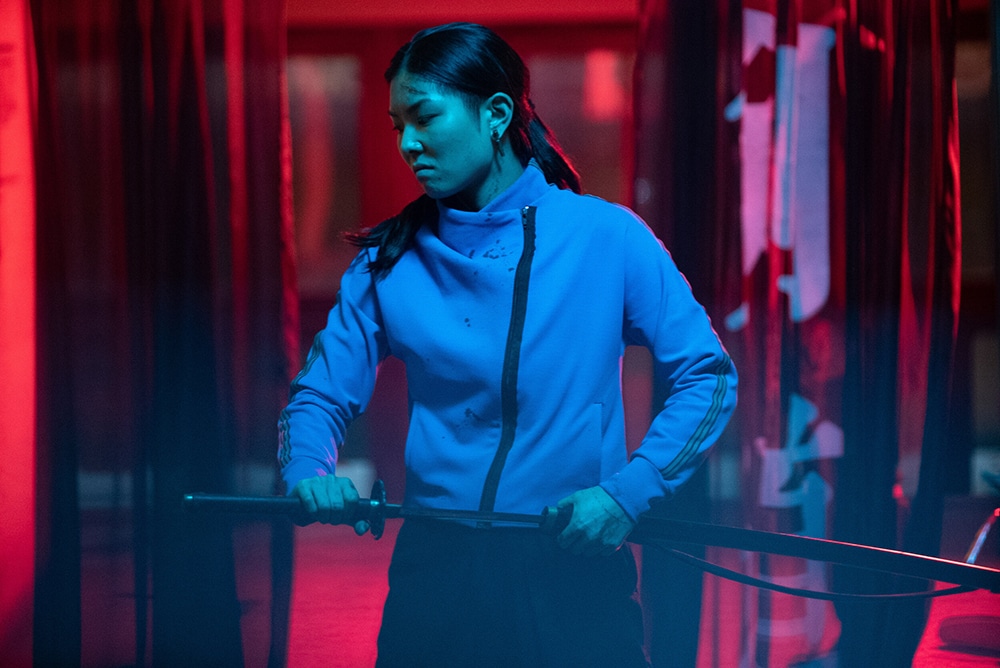 A film about Japanese gangsters taking place in Brazil, with Jonathan Rhys Meyers playing an amnesiac found clutching a cursed katana, and featuring a lead actress mostly known for her music on Spotify? While there have no doubt been stranger mashups than what I just listed above, I am hard-pressed to think of a single one at the moment.

But if that synopsis sounds like your kind of roller coaster, then strap in. We have some dips and drops ahead.

Based on a popular graphic novel by Danilo Beyruth, Yakuza Princess had to be a difficult concept to sell. It’s the sort of “everything but the kitchen sink” movie concept that sounds both appealing and appalling in equal measure. And while I cannot say whether or not the gamble paid off as far as profits are concerned, I can absolutely certify that the cast and crew went all-in with their respective contributions.

Yakuza Princess is the story of Akemi, a young Japanese girl residing in São Paulo, Brazil, one of the largest non-mainland Japanese communities in the world. Orphaned as a young child, she has been living with her grandfather, far removed from the Yakuza drama plaguing Osaka. But the ghosts from her past won’t stay buried, and soon she will find herself caught in a war that was raging long before she was born.

It’s an interesting premise to be sure, and one the film takes its time bringing to life — outside of a brilliant cold-open that promises an urgency that never really manifests again.

The cast of characters is slowly introduced via frequent jumps, showing us what they are up to, giving us hints about who they are, and then jumping to the next character in the queue. Show, jump, repeat. But due to the frequent jumps to and fro, the beginning of the film feels aimless. Meandering. As if it’s unsure how to start.

Sadly, that feeling tends to permeate the whole affair. Even up to the end credits, there are long moments where nothing much really happens. But that’s far from the only way in which Yakuza Princess struggles. One of the most difficult things about reviewing this movie is that it’s never really clear what kind of offering it truly is.

There’s a strange sort of dichotomy at the heart of Yakuza Princess.

A quest for identity, as it were. A duality of purpose which unfortunately has a negative impact on the final product.

On one side of the coin is a gritty action movie.

Guns and swords feature prominently in the film. Often with hyper-realistic blood effects added. Occasional flourishes of martial arts mayhem crop up as well and generally have a more grounded approach to them. It may be choreographed combat, but there is an ad hoc feel to the violence. Down and dirty. Like a real fight would be. It’s not a ceaseless parade of battles, mind you, but there are enough scenes that action fans won’t be left wanting.

On the other side of the coin is a movie that wants to ruminate on more substantive topics: family, honor, tradition, and choice versus fate.

These are heady subjects, and in the right hands could add gravitas to what is ostensibly just a violent crime film. Unfortunately, in Yakuza Princess, these meaty topics are never given their due. Instead, they are thrown in haphazardly. Like the director just grabbed a handful of thoughtful subjects and just tossed them at the wall, hoping some of them would stick. However, very few actually do.

In all fairness, there is absolutely nothing inherently wrong with an action movie trying to break from the mold. 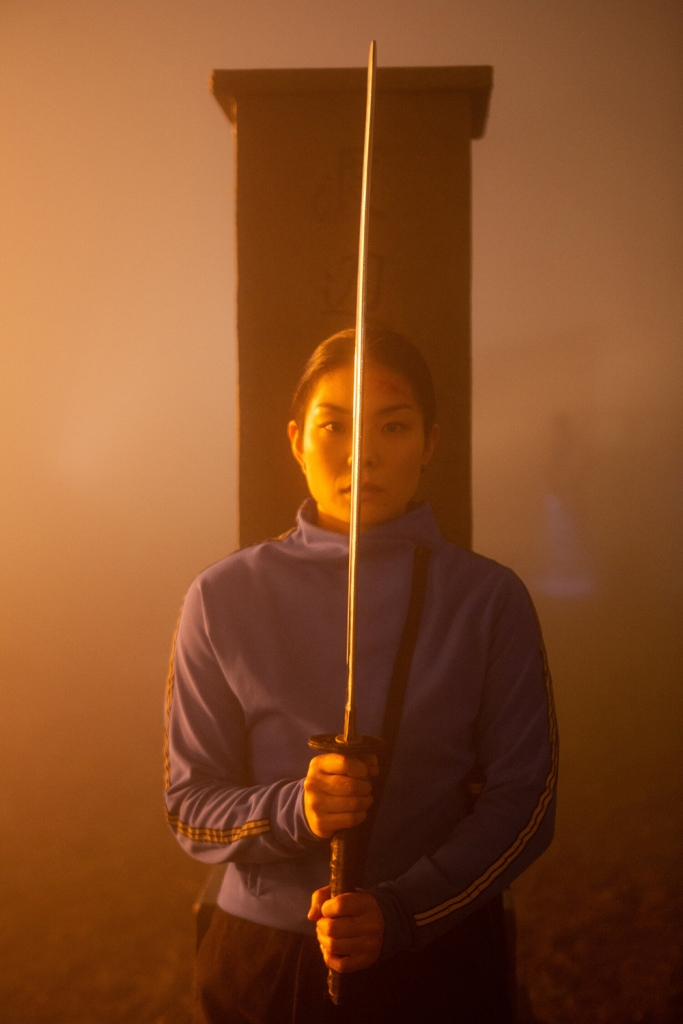 In fact, I applaud the effort. There was a genuine attempt at making a modern samurai movie with Yakuza Princess. It’s just a shame that the end product fell a little short.

Characters speak of honor like it’s a physical thing to be owned. As if just talking about having it can make it so. Earlier in the film, a pair of wizened gangsters watch an old black & white movie in which a samurai commits seppuku, explaining the importance of the act to Rhys Meyers’ character, who then proceeds to get drunk. A cursed sword from Japanese myth just adds to the chaos, especially when it imparts visions to the heroine when she touches it.

Any attempt at seriousness just gets deflated by such odd choices soon after. It’s as if the movie is attempting to celebrate Japanese culture but then is only too happy to stomp all over said culture when the plot demands it.

Performances were, for the most part, serviceable. As the lead, much of the movie’s weight is carried on Masumi’s shoulders; shoulders which occasionally bow under the pressure. She’s not particularly great, but she’s not terrible either. There are moments when she truly manages to emote, and her expressive eyes speak volumes. She just needs more time in front of the camera to truly come into her own.

As for her character Akemi, she’s sort of drifting through life in São Paulo, learning kendo from a kindly old sensei, while working the register at a gift shop in the evenings. Just an average person with a not-so-average lineage.

As the sole foreigner, neither Brazilian nor Japanese, Jonathan Rhys Meyers is an odd choice, though not necessarily a bad one. 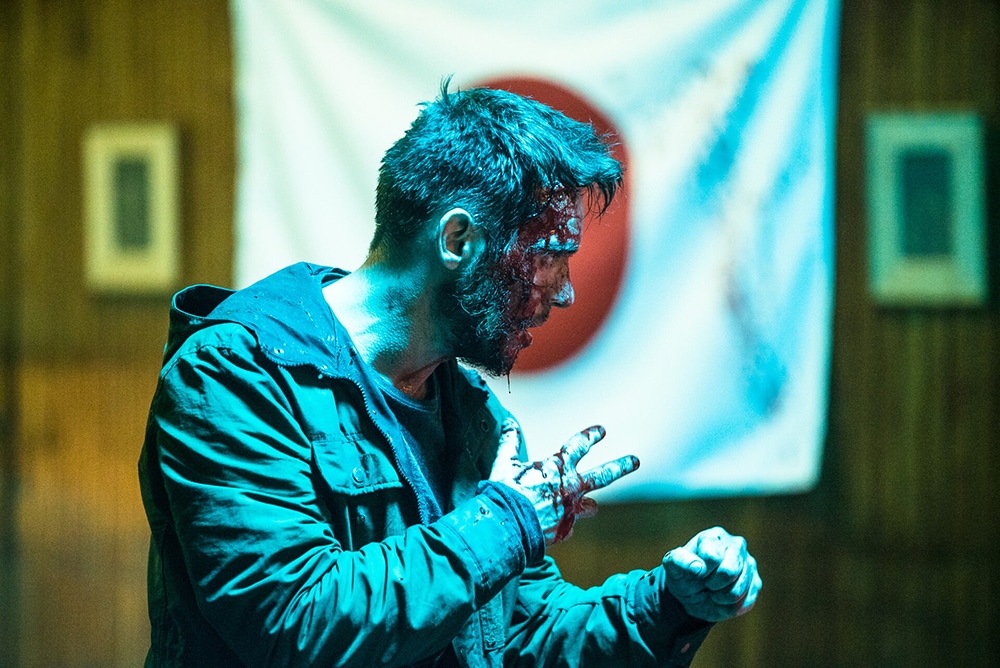 He manages the physicality of the role just fine. And his “full frontal” stroll out of a hospital was completely unexpected. But there’s really not much more to his role. His nameless amnesiac character is very nearly mute. And when he does speak, it’s generally in quiet tones.

Kudos must go to the wardrobe and makeup artists, however. With his scarred-up face and scraggly demeanor, Rhys Meyers is virtually unrecognizable from some of his other roles.

Tsuyoshi Ihara fares a little better, as he pulls off the inimitable cool of a Yakuza gangster with ease. For a good chunk of the movie’s runtime, it’s not quite clear which side of the fence his character is on. He has an inscrutable face that exudes mystery.

His character Takeshi also has a world-weary demeanor about him, as if he’s seen and done things that have drained his humanity. Which, given what we eventually learn about Takeshi’s past, makes complete sense.

The rest of the cast fill their roles adequately. Of course, pretty much every other role is quite minimal by design.

This is really Akemi’s story, with Takeshi and the no-name gaijin there to help her across the finish line. 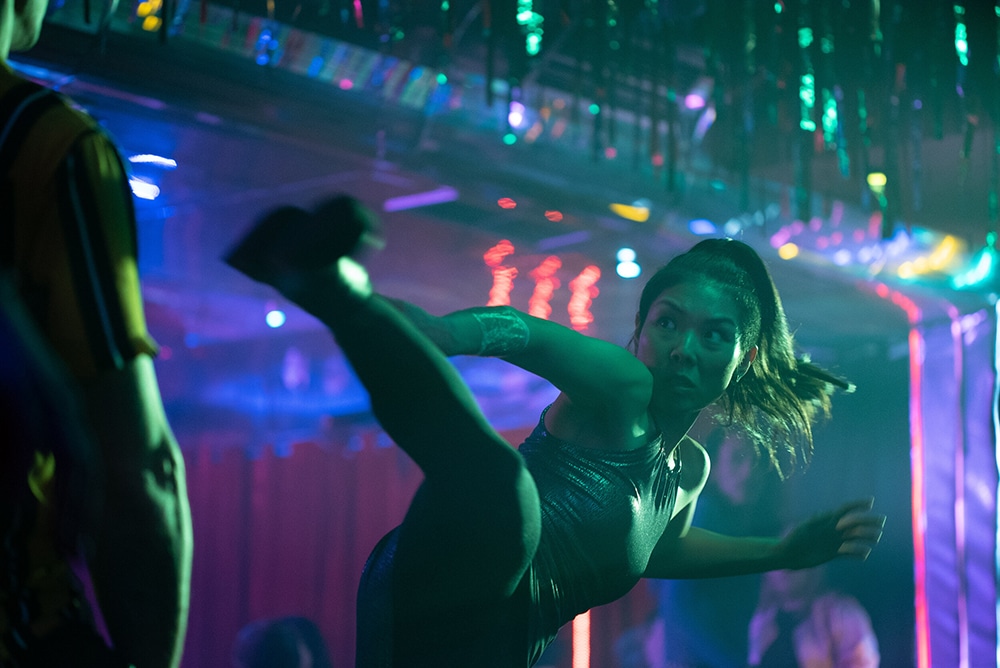 In fact, nearly every other character in the movie is a cipher. There to dispense a few mysterious clues, or to shepherd our protagonists on to the next character who will impart more clues. And so on.

On the technical side of things, the movie is a bit of a conundrum. There are moments of inspired camerawork; a rotating shot inside a metal elevator shaft as our protagonist runs up adjoining stairs is particularly brilliant. Elsewhere, the camerawork is perfunctory at best.

The sound design is much the same in that it does the job. The on-location shooting, however, really sells the gritty nature of the film. I’m always pleased when a movie isn’t afraid to place its characters in dingy and dreary environments.

Though it’s a smaller production on a limited budget, the stunt work is largely impressive. This is no Hollywood superhero film. Everything takes place on a smaller scale. Personal and close. Fights have a genuine impact. Characters get tired. Wounds accumulate and carry over from scene to scene.

That said, someone needs to tell the production crew that when removing a bullet from an appendage, the bullet will be deformed and jagged. Which is how they are designed. Watching movie characters pull perfectly intact bullets from points of impact always elicits a chuckle. And not in a good way.

If it sounds like I’m being harsh on Yakuza Princess, it’s because I am (to an extent). 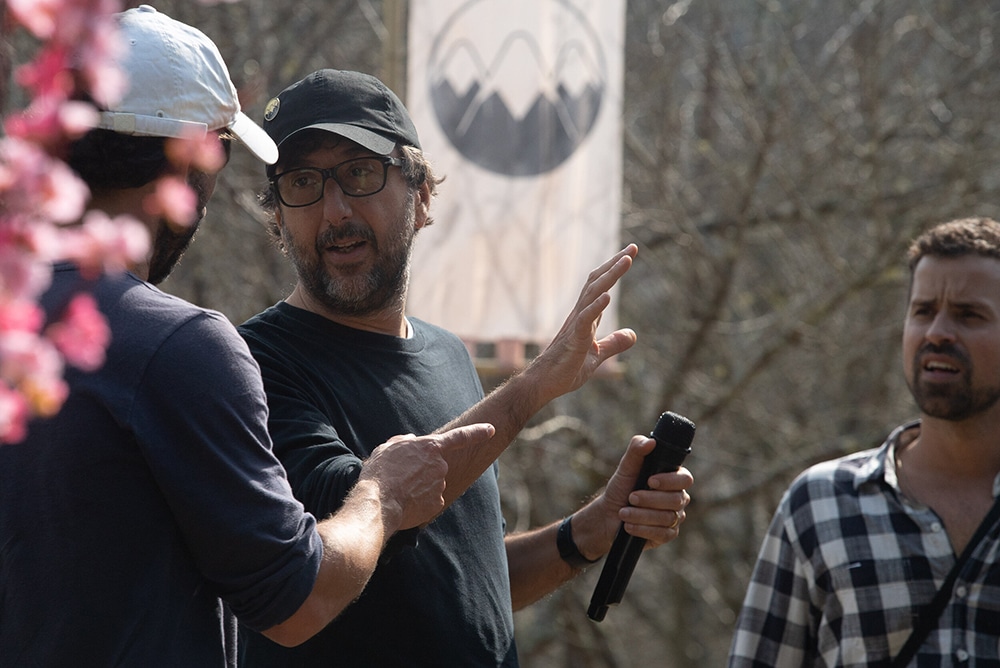 I am a huge fan of Japanese cinema, especially samurai films. Old? New? Doesn’t matter to me. Just show me the swords already. But I’m not so enamored that I cannot be critical when it’s needed. And it’s certainly needed here.

I realize that this is a lower-budget affair and that expectations shouldn’t be high. But I really wanted there to be more to this movie. More emotional impact. More catharsis when our protagonist decides to stand up for herself. More weight to the violence other than “it looks cool”. And certainly more heft to the concepts of bushido and honor.

All pretenses aside, it really is a modern samurai movie after all.

Plus, I’m all about filmmakers from other countries attempting to capitalize on new ideas. Trying their hand at something that might not be their standard output. As I mentioned earlier, the cast and crew go all in, and I really wanted the final product to be indicative of that.

But Yakuza Princess falls just shy of greatness. I wanted to love it, but I could only like it instead.