While far from his best, “Aenigma” remains essential viewing for Fulci fans, and Severin delivers a feature-rich treasure for fans and collectors alike.

With renewed interest in the career of Lucio Fulci, more of his lesser-known works are being released to home video. Severin Films’ latest, in conjunction with the release of the documentary Fulci For Fake, is the 1987 psychic gore fest, Aenigma. 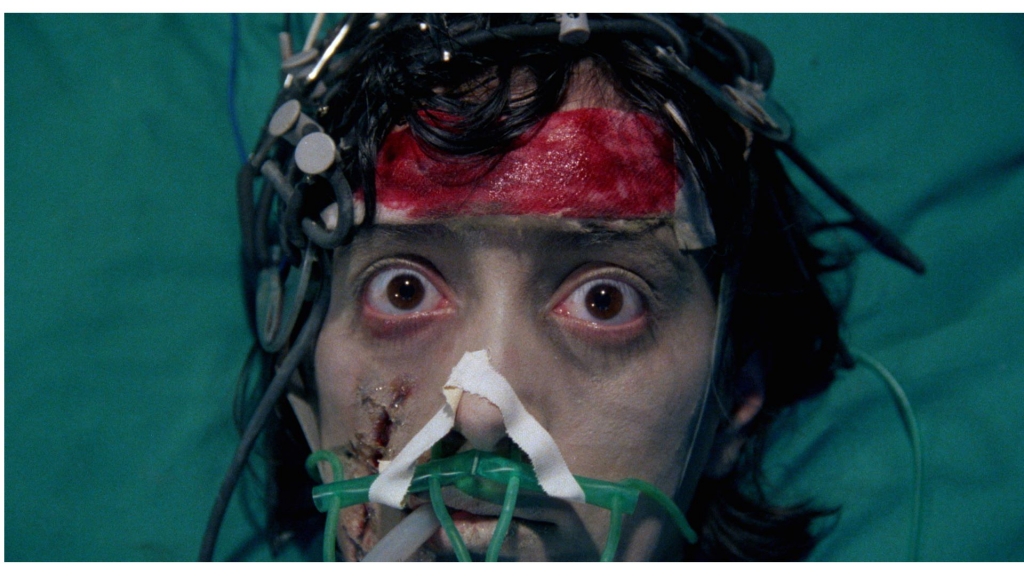 At St. Mary’s College in Boston, student Kathy (Milijana Zirojevic) is preparing for a date with the narcissist college gym teacher, Mr. Vernon (Riccardo Acerbi). The opening scene of Kathy getting dressed and made up for her date is set to a pop song called “Head Over Heels,” though listed in the opening credits as “Head Over Meels.”

While Kathy has no backstory, we are led to believe that she is unpopular at the school and possibly considered unattractive. In a set up similar to Carrie, the whole date is a cruel prank. On the date, Mr. Vernon takes Kathy to a spot in the woods to make out. What Kathy doesn’t know is her classmates are parked in the woods too and set up to listen to what is happening in Mr. Vernon’s car. When they reveal themselves, Kathy flees the car and is chased by her classmates into a nearby road where she is hit by an oncoming car. Kathy is admitted to a hospital in a coma as a result of her injuries.

An unknown time later, a new student arrives at the college. Eva (Lara Naszinski) is a gorgeous woman, and she is assigned Kathy’s old dorm room. Eva is a psychic avatar for Kathy, who still lies in a coma but is able to psychically project from her body.

Soon after the arrival of Eva, the students involved in the prank on Kathy, along with Mr. Vernon, began to pay the price for the cruelty.

From her hospital bed, Kathy uses her psychic abilities to dispatch her tormentors in increasingly inventive, cruel, and bloody ways. 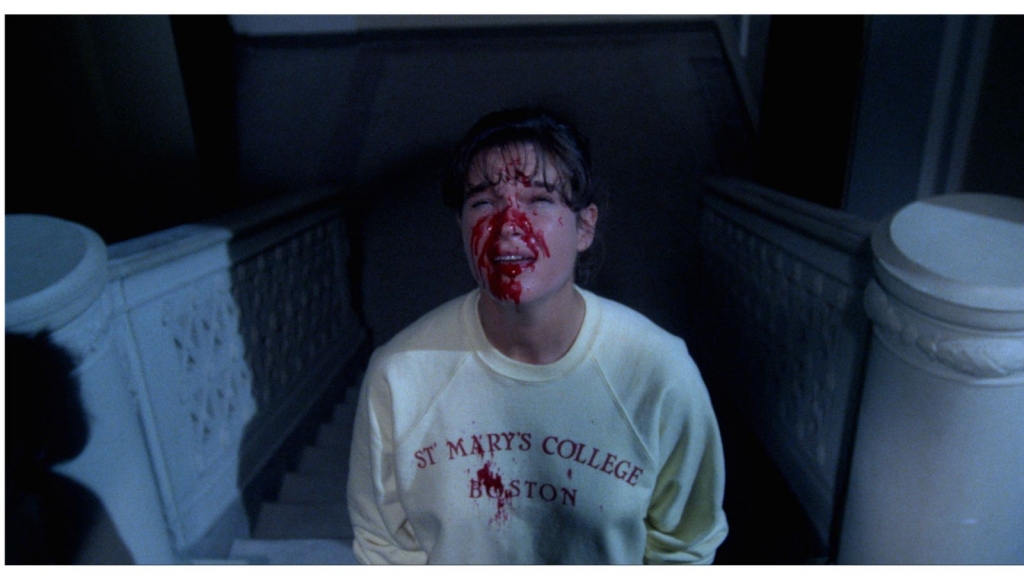 Kathy’s neurologist, Dr. Anderson (Jared Martin), notices that her vital signs increase from time to time, but never makes the connection between that and the deaths of the students. Kathy, however, senses potential danger if Dr. Anderson discovers what is happening. She sends her avatar Eva to seduce Dr. Anderson, leading to a nightmare sexual encounter that includes a graphic scene of Eva biting off a chunk of Anderson’s flesh and drinking blood from the wound.

Aenigma was made when Fulci’s health was beginning to decline, and his budgets were being slashed. His later movies would have lower budgets as he continued to take work as offered to him. Like much of his work in the late 1980s, Aenigma isn’t a great Fulci film when compared to films like Zombie or The Beyond.

Fulci borrows liberally from classic horror films such as Carrie, Phenomena, Suspiria, and Patrick. As noted in the commentary track, it’s difficult to be shocked that Italian horror in the 1980s and 1990s is derivative and pays homage (to put it kindly) to better films.

Despite the nods to other films, Fulci pulls off an enjoyable movie with a limited budget. Fulci, even when beginning to feel the effects of his illness, is full of wonderfully inventive ideas.

Aenigma might not be the Fulci movie you introduce to a friend, but it’s definitely not to be lumped in with the worst of Fulci’s filmography. 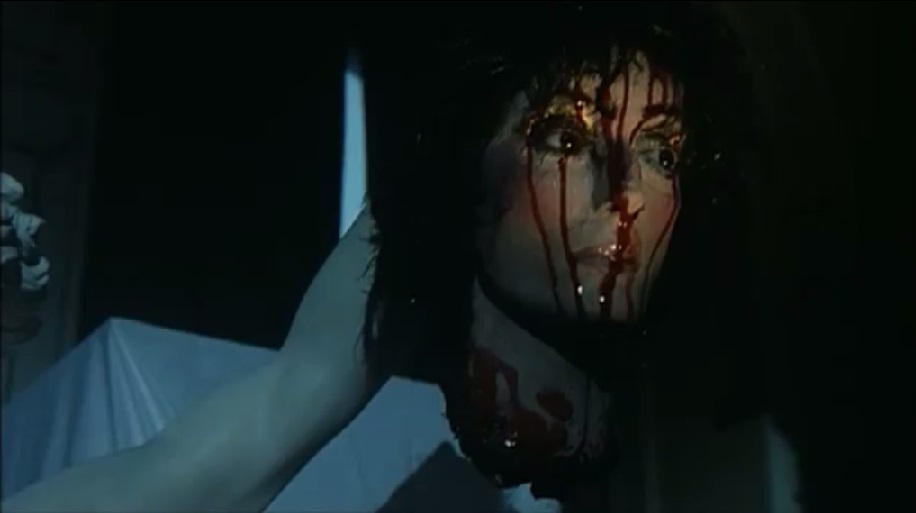 As fans have come to expect from Severin Films, the Blu-ray disc is packed with amazing features.

The audio commentary with Fulci biographer Troy Howarth and Mondo Digital’s Nathaniel Thompson fumbles some at the start. Soon enough the two fall into an almost interview-like conversation with Thompson pushing the commentary narrative forward. Howarth, to no surprise, is eager to talk about Fulci and his history in film.

Both touch on Aenigma at specific points in the movie, but spend much of their time telling personal stories about Fulci, his broader filmography, and how his illness toward the end of his life informed his work and his decisions on which movies to take on. 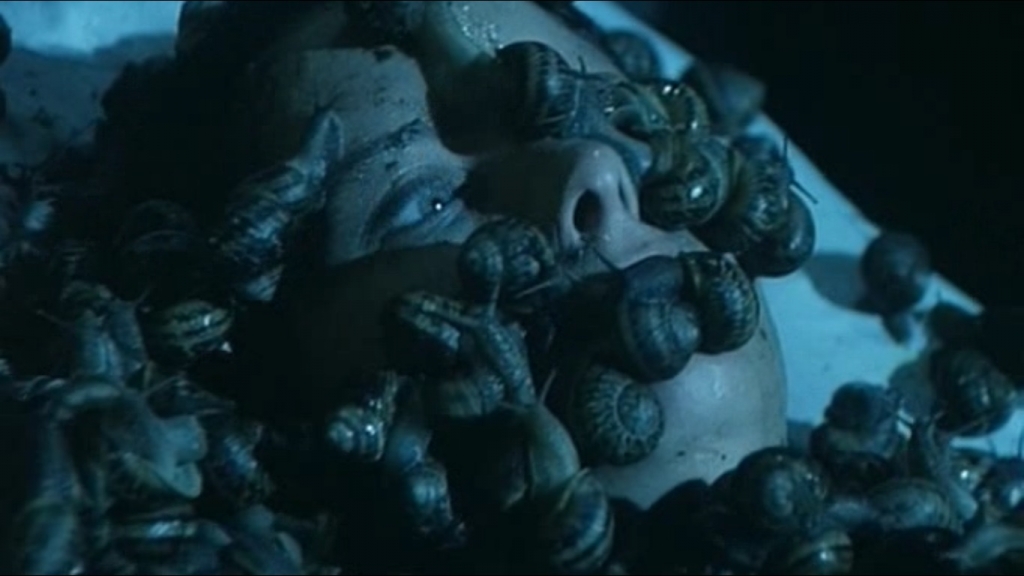 The featurette focuses on the latter years of Fulci and ends up focusing quite a bit on three of his later movies — Cat In The Brain, Zombi 3, and Demonia.

The documentary is essentially a talking head featurette, combining interviews with film historians and critics. They touch on Fulci’s declining health and budgets that impacted the quality of his films, and especially on his self-referential remake of Fellini’s 8 1/2 — Cat In The Brain.

At nearly 40 minutes, this featurette makes a fitting companion piece to the documentary Fulci For Fake (also released by Severin Films).

The interview with Giorgio Mariuzzo doesn’t shed too much light on Fulci, though he confirms a Fulci trait that’s noted in the featurette and commentary track — Fulci wasn’t concerned with hygiene or being clean. Mariuzzo also reminisces about his work as a screenwriter, and how writing at night was the perfect environment for writing horror and inadve