“Spine of the Night” is an ultraviolent throwback to animated films of yesteryear, with some fatalistic philosophy for good measure. 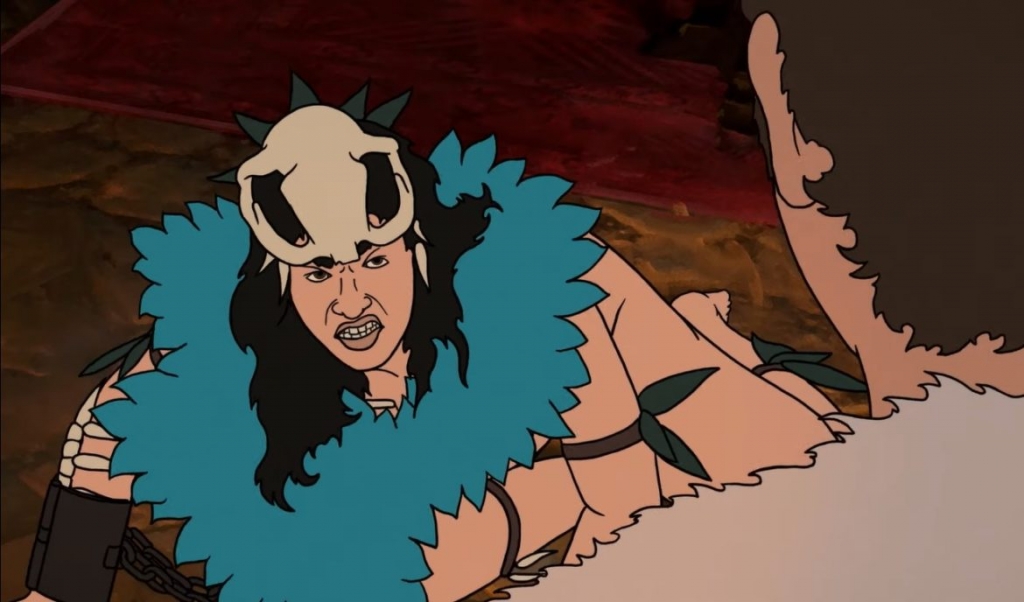 Can a film be both epic AND intimate at the same time? Can a movie tell a fairly progressive tale while miring itself in the technology of the past?

I’m not entirely sure if the answer to either of those questions is yes, but The Spine Of Night certainly gives each of them a good college try.

Released somewhat out of the blue in March of 2021, for certain viewers, The Spine of Night feels like a throwback to a specific type of film from the late 70s and early 80s. Very much an homage to niche titles of yesteryear. This is not a criticism so much as an observation. As a child of those times, who grew up watching a fair share of rotoscoped films, The Spine of Night absolutely brought with it a sense of nostalgia.

For those who don’t know, rotoscoping is the process of manually altering film footage, usually by animating over it, one frame at a time. Though not quite as tedious as stop-motion filmmaking, rotoscoping is still a rather involved process. While it never really took off as a truly viable style of filmmaking, there are nevertheless a few well-known rotoscoped movies out there.

On the top of any list would undoubtedly be Ralph Bakshi’s 1978 Lord of the Rings movie, as well as the Bakshi/Frazetta collaboration Fire and Ice, released in 1983. Both of these films allowed the filmmakers to sidestep the need for expensive set design by simply animating the locations they needed instead.

In other words, think VFX before computers.

However, though Baskshi’s rotoscoped offerings might have achieved a modicum of mainstream success and recognition, The Spine of Night has much more in common with the 1981 underground-ish film Heavy Metal. 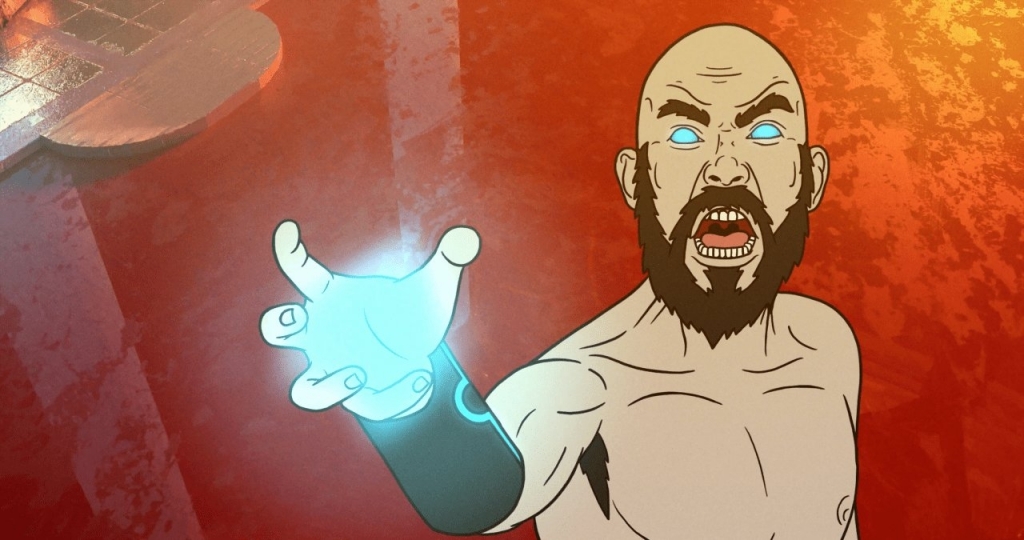 For those readers who are too young to know, Heavy Metal was THE animated movie to own on VHS for teenage boys in the 80s.

This was long before anime had gained a foothold in the West. At the time, it was nigh unthinkable for an animated movie to feature copious amounts of gore, nudity, swears, and violence. Parents had no idea what they were buying their children, and we sure as hell weren’t going to inform them.

Watching/owning Heavy Metal was almost a rite of passage, and there are times when it feels like The Spine of Night is trying to replicate some of what made that classic movie so magical.

Directed by Philip Gelatt and Morgan Galen King, The Spine of Night clocks in at one hour and thirty-three minutes.

Philip Gelatt has writing credits on the 2015 Tomb Raider reboot, as well as Love, Death & Robots (an animated anthology show that I love). Morgan Galen King directed a rotoscoped short titled Exordium, released in 2013, and which seems to be a precursor to this movie.

The IMDb synopsis reads as follows: Ultra-violent, epic fantasy set in a land of magic follows heroes from different eras and cultures battling against a malevolent force.

And yes, this is certainly a high-fantasy tale, with castles, swords, and magic. 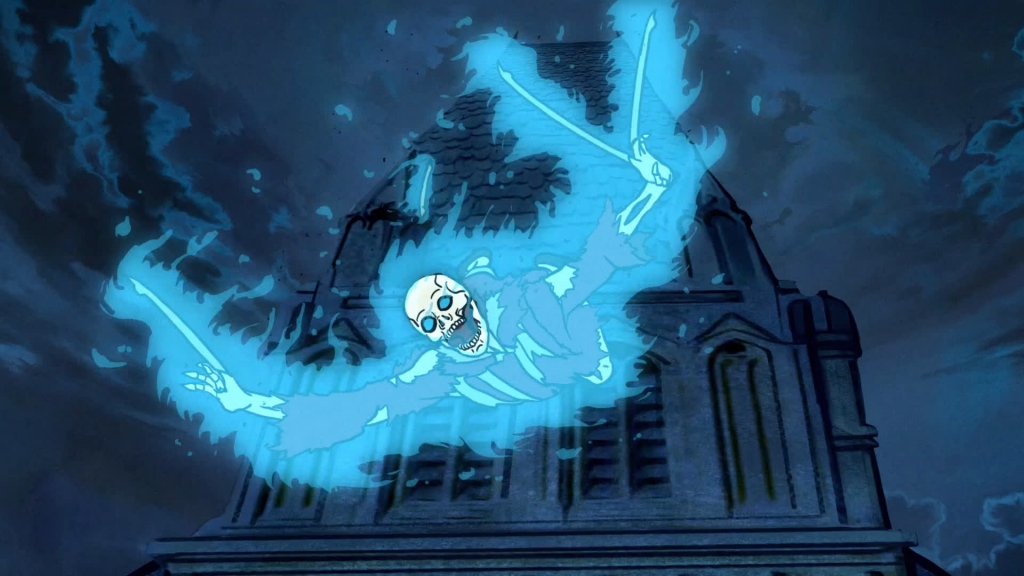 Though it is ostensibly “one” story, The Spine of Night still feels like an anthology tale (much like Heavy Metal), with different main characters cropping up in each “chapter”, only to be replaced as the narrative jumps forward in time.

These time-skips never make the tale feel disjointed, however.

Instead, they serve to help the tale feel larger than it really is. To give the story its sense of epic proportions. This is a strange dichotomy, since, in almost every other sense, The Spine of Night has a smallness to it.

Part of that is no doubt informed by the rotoscoping itself. While it can give filmmakers a level of creative freedom that, in this day and age, is normally only accomplished through expensive VFX, rotoscoping also invites shortcuts and forces some limitations.

First, in the case of this particular film, very few scenes have more than a few people in them at any given time.

For as heady a tale as this ultimately is, the fact that there are rarely more than two or three characters in any given scene detracts from the overall grandeur. 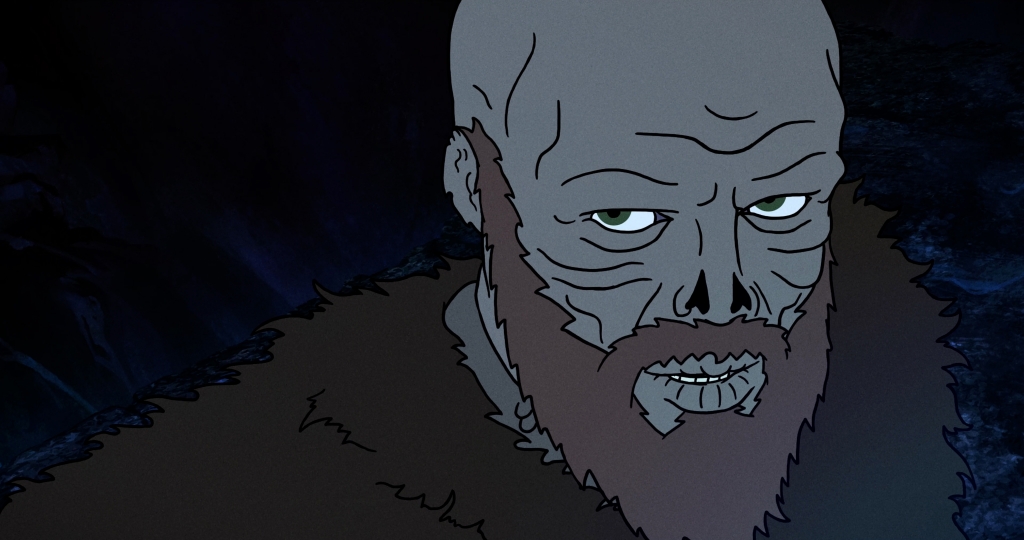 Realistically, with rotoscoping, anyone could have stood in as an extra. And yet many scenes that should be heavily populated are strangely sparse. But maybe they didn’t have the funds for animating additional people.

One of the inherent problems with rotoscoping is that motions seem slowed down, even during the action and battle scenes.

Heavy Metal suffered from this, though we rarely noticed it due to all of the animated titties on display. As an adult (still totally fond of animated titties though I may be), I can see the detrimental impact that the rotoscoping process has on kinetic scenes.

Also, for all the freedom that having animated backdrops can bring, rarely is that broad canvas utilized in The Spine of Night.

A few of the immediate effects are well done, but anything that’s not the center of attention within a scene tends to just be blah. Peripheral events and locations are basically non-existent. Whether this is due to budgetary constraints or directorial decree is anyone’s guess.

But, where a camera can capture beautiful static images in the background while following a principal character or set-piece, for rotoscoping an animator would have to come in after the fact and draw in all those additional things by hand. It’s a process, to be sure.

But for everything it does wrong, The Spine of Night gets oh-so-many things right. 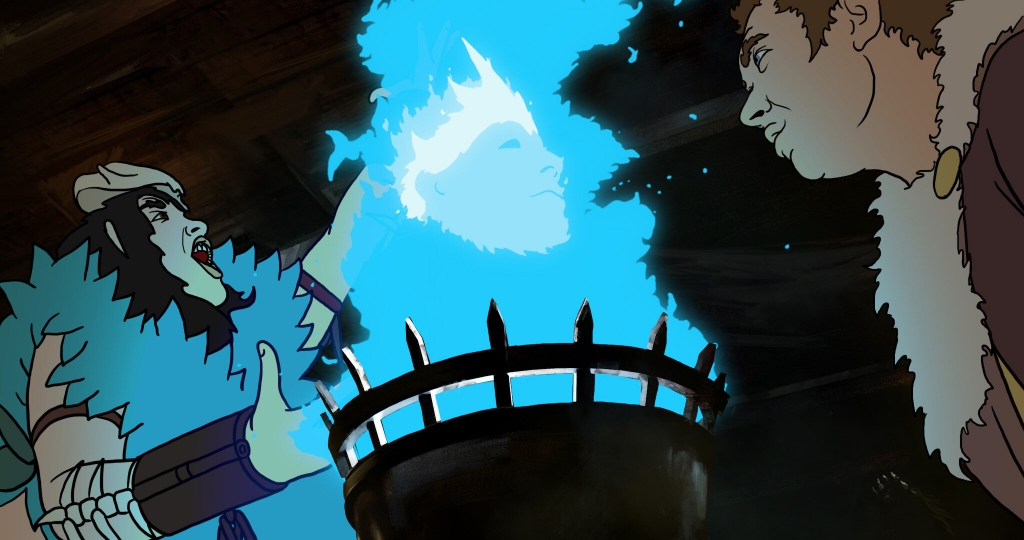 First off, the voice cast is pretty awesome. They don’t necessarily always kill it, but where else can you have Lucy Lawless, Patton Oswalt, Richard E. Grant, and Joe Manganiello in the same movie? Patton Oswalt is uniformly excellent as the despotic ruler of the fo