In Search of Darkness, to its credit, got me thinking. The doc exists as both cause and effect, a primer on ‘80s horror done up in its hyper-stylized modern image. It’s hard to find contemporary exploitation that doesn’t lean into that neon skid, and not just the aesthetic either.

As I outlined in the last Shudder Sunday, Darkness skates over the sociopolitical stalemate of Reagan’s America that both inspired and afflicted the decade’s nightmares. The impression left is one often repeated even by cultural authorities who saw it all in theaters — cool was the rule and subtext was the accidental byproduct, if it was there at all.

It’s a disservice only spread in the broader Stranger Things encore of ‘80s pop culture as nostalgic distraction. Times sure were better then, and if you don’t believe that, get a load of the soundtrack.

Turkey Shoot doesn’t have a great soundtrack, at least in terms of cassette sales. Mad Max composer Brian May stitches together colonialist drums and primordial synths to make a sound as strange and unforgiving as the violent shlock it eventually drowns out. It hews closer to the earlier Roger Corman model of low-budget grist than the Cannon standard of its day. (If the accents didn’t give it away as Australian, Turkey Shoot could easily pass for one of the former’s Filipino productions.)

But Turkey Shoot is still ‘80s to its repeatedly broken bones in a very different way — seething Reaganomic rage.

Australia may be awful far from the States, but director Brian Trenchard-Smith knew what was coming:

“We wanted to make a tongue-in-cheek but gutsy action movie with subtext about corporate fascism at the beginning of the Reagan era.”

Though the 14-page opening that showed the state of its dystopia was lopped off due to last-minute budget cuts, Turkey Shoot cuts right to the chase with actual footage of actual riots. They carry a tension you can’t fake — no artifice, only agony. It’s a choice that calls taste into question, like much of the movie’s back nine, but undeniably effective.

Once fiction replaces fact, three bodies wake up in the back of an armored van wearing banana-yellow jumpsuits and matching Chuck Taylors. One was arrested for trying to stop the police from beating a man to death. Another, because some spurned would-be lover lied and told the authorities she was a prostitute. The last and most incendiary was caught broadcasting subversive messages wherever and whenever he could, all laying plain the government’s only law: “Accept slavery or die!”

They’re the latest inmates in one of many re-education camps across the country. In case UK audiences missed the point, the standard-issue Sadistic Guard is named Thatcher in honor of Reagan’s prime minster pal. Though to call him standard-issue is a bit of an injustice.

A movie as angry and loony and gory as Turkey Shoot can only live or die by its villain. 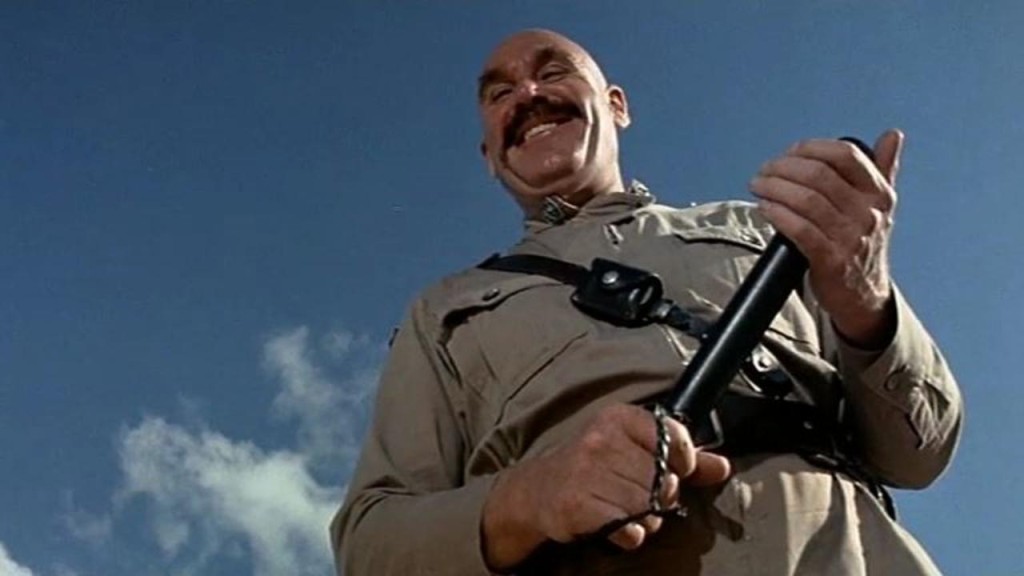 Sure, the warden is mean in a middle-managerial sense, but Thatcher could exist in no other universe than this. Michael Craig, seemingly eight-feet-tall if he’s an inch, stomps around the prison yard like a Popeye character that fell out of the Funnies. But nobody in Popeye ever applied themselves to their work in hopes of the aristocratic brass offering them a choice prisoner after they were done assaulting her.

He teeters on a bizarre line between caricature and credible threat, never illustrated better than when he shadow-boxes a young woman until she messes up the national anthem, after which he kicks her to death in the dirt. His is the cruel soul of Turkey Shoot, gauge your mileage accordingly.

One of the castrated guards corners Olivia Hussey in the shower, and it’s as uncomfortable as you’d expect, though she does leave him with a grievous injury for his efforts.  But it’s all in a shoddy shade of Verhoeven. The same way RoboCop and Total Recall and Starship Troopers all have their moments of ultra-violence and abject disgust that would seem tasteless à la carte but achieve acidic harmony when properly coated with popcorn butter and black comedy, Turkey Shoot just about works.

Even Trenchard-Smith has admitted the movie got away from him.

In Not Quite Hollywood, a documentary about Australian genre cinema that I’ve previously celebrated for Shudder Sunday, the talking heads paint it as nothing short of a national embarrassment. Critics abroad were no kinder, with the Philadelphia Daily News deeming it “unfit for human consumption.”

With the exception of star Steve Railsback’s frustration at being shot at with ball-bearings to fake gunfire, accusations of its artistic squalor are greatly exaggerated.

The prison half of Turkey Shoot is all business. Railsback sweats it out in an ill-defined update of a medieval rack, spitting out trailer line after trailer line at the watching warden: “I’m the one you can’t break. I’m the one you’ve been afraid of all your life.”

There’s a group shower scene with equal opportunity nudity, in line with Australia’s liberated philosophy on the subject, but the point is more dehumanizing than titillating — shame has been beaten clean out of these people.

Even the sideshow beast man wears a top hat.

That’s as good a segue as any to the second half of Turkey Shoot — and about as subtle. 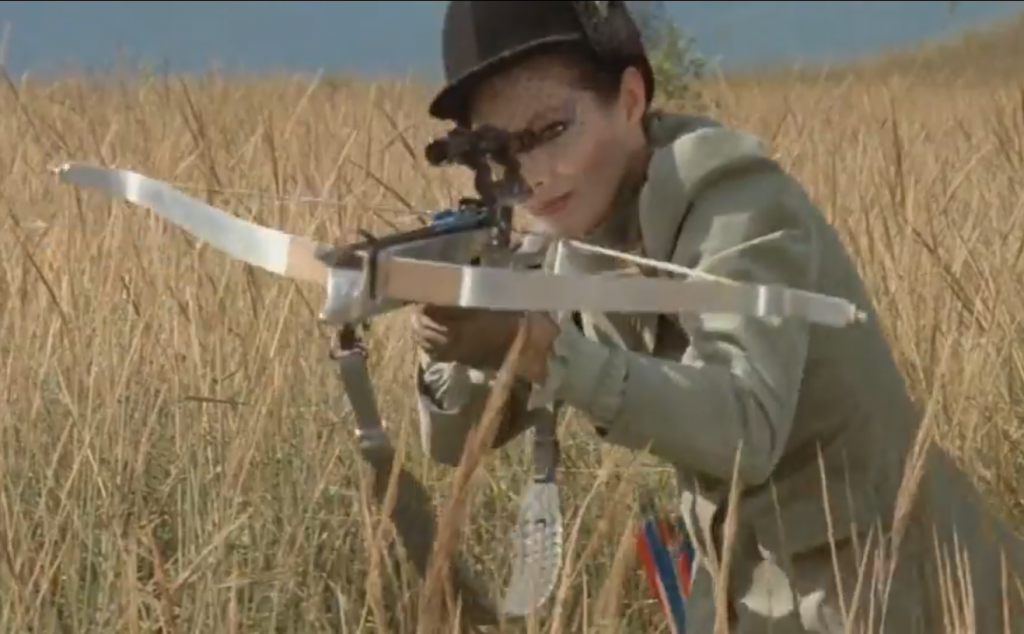 Turkey Shoot turns into The Most Dangerous Game by way of, well, The Hunt. The so-called rehabilitation center is really just a livewell for aristocratic gun nuts to test their aim.

One of them literally tests their aim on a passing prisoner, who then limps for the rest of the movie.

The class divide is as clear as the capitalist lie all re-educated subjects must recite daily:

“Freedom is obedience. Obedience is work. Work is life.”

The rules of this society are never explored beyond Railsback’s renegade broadcast, but you can piece a few together from the scraps.

Disagreeing with the police is a cardinal sin. Perceived promiscuity is another no-no, despite most of the men being avowed perverts. Not living the way the rich want you to live, though, is about as close to doctrine as Turkey Shoot gets. If the beast man eating somebody’s toe so they can’t run away too fast seems goofy, it’s because this particular hellhole, beneath all its blood and ugliness, is inherently goofy.

An insulated band of repressed rich people who can’t remember even the simplest of human joys sculpting the world in their fascist image? Now that’s just absurd.

Turkey Shoot is inescapably uneven, forgoing a resonant frequency in favor of pinballing between the silly and sadistic extremes.

But the grimmest scene of the bunch has only gotten crueler with time. 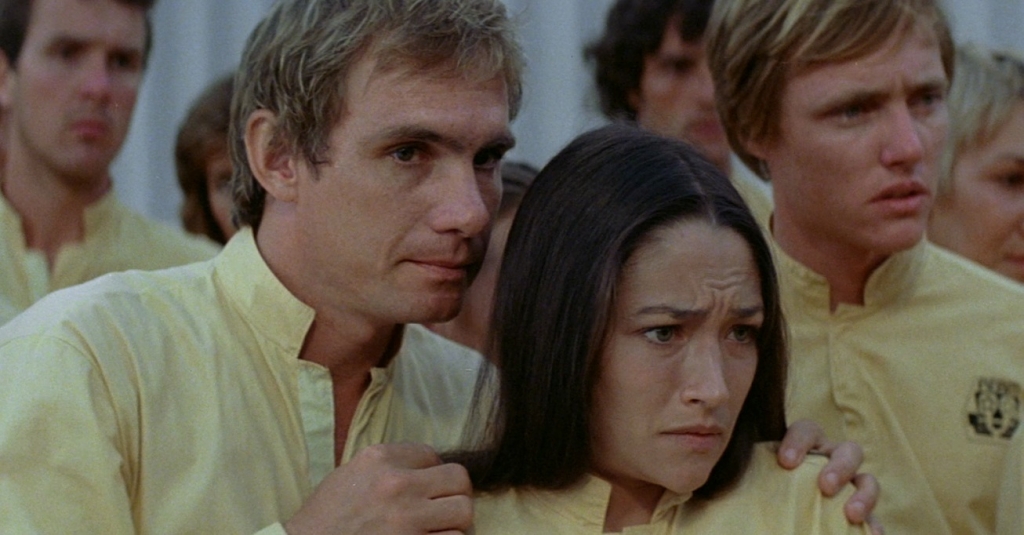 When a hapless prisoner is forced to play Thatcher’s favorite “game,” Hussey refuses to watch. She didn’t do anything wrong. She’s a good citizen and doesn’t even hear the euphemism.

But then the prisoner loses the “game,” not that victory was ever possible, and Railsback makes Hussey watch what happens next. The prisoner admits defeat in the dirt, soaked in gasoline. Thatcher lights a match. Everyone else turns away as the poor guy goes up like a road flare, but Railsback doesn’t let Hussey so much as flinch.

She didn’t believe the system was broken even as it ate her alive.

Must be a mistake, nothing more. She followed the rules. She did what they said. Why her? But why him? She could be next, would be, if she didn’t stare at the man on fire and watch him die screaming in his banana-yellow jumpsuit and matching Chuck Taylors.

Is Turkey Shoot a message movie? Absolutely not.

It’s too garish and gleefully deranged to push any given metaphor too far.

This is not a demerit so much as a reminder of early ‘80s cinema, Australian or otherwise, that racial representation is nonexistent, selling the sharpest satire short. The closing quote from no less than H.G. Wells — “Revolution begins with the misfits…” — sounds awful tinny at the end of a movie with so many wielded machetes and exploded heads.

Turkey Shoot is still exploitation in the end, made for grindhouses and drive-ins alike. But it’s a big, B-movie reminder that there is no inherent virtue in “turning your brain off” for art when it can just as soon be gloriously excessive and still have something on its mind.

It may not match the anti-‘80s heights of Escape From New York or RoboCop, but it certainly belongs on the same shelf. 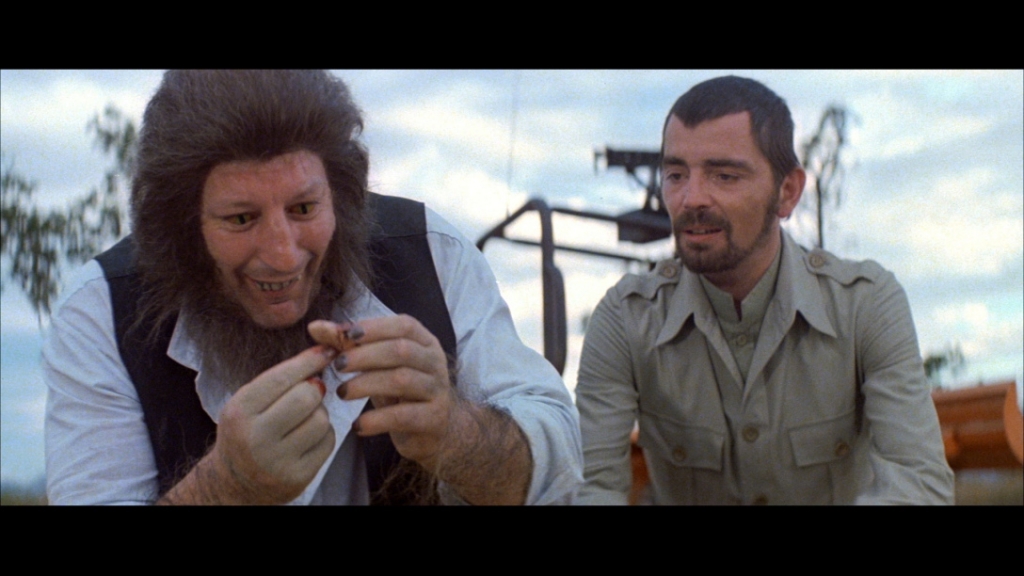 VHS tapes are only valuable in retrospect, as tactile memory and video store nostalgia. In any pragmatic sense, they’re inferior to every home video format since. The static of the screen and the hum of the reels separate as much as they add, one more distracting layer between us and the art. When cool was the rule, that didn’t matter.

Sometimes it takes a modern revisit, without the static and the hum, to notice what was going on in the background. Shudder has a pristine print of Turkey Shoot, better than it probably looked in the camera, and the point has never been clearer.

Overall Rating (Out of 5 Butterflies)
https://www.youtube.com/watch?v=DnA4Hn6ntlc