With a great script, a stylish look, and a star-making performance by the exceptional female lead, Close Calls is definitely one to watch out for. 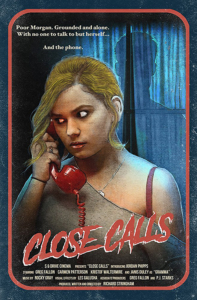 Close Calls is about a troubled young woman named Morgan (Jordan Phipps), who is left home alone and has to take care of her mentally ill grandmother while her father goes out for the night. But when a psychotic caller continuously harasses her and she thinks everyone is plotting against her, Morgan must face her own inner demons and more in order to survive the night.

Close Calls is loaded with striking visuals and moody lighting. The look of the film is colorful yet muted, surreal and lived in. Some scenes are foggy looking, others are drenched in primary color lighting, and others look like normal moments from everyday life. But the whole film features a consistent, slightly grainy, dream like atmosphere that fluctuates from scene to scene.

It’s a nice technique that blurs what’s real, what is possibly imagined, and what is feared. The viewer isn’t simply told that reality is blurring and what’s real is getting harder to determine, they are shown.

The screenplay allows time and character development for the father. Not only does this deepen the story but it also adds to the character of Morgan and the dynamic of their relationship. Even the deceased mother is given screen time in an interesting and compelling way. A lot of modern horror movies with teenage characters ignore the parents all together, and it was refreshing to see both parents and the grandmother involved in this story.

Like the attention given to the family, the film as a whole takes its time and allows the story to unfold. I was completely absorbed by what I was watching. There’s a four scene sequence in the middle of the film that takes over 20 minutes to play out. The stylistic choices and dangerously playful back and forth between Jordan Phipps and Greg Fallon make this sequence a riveting highlight of the film.

Jordan Phipps is the modern version of a classic Hollywood screen siren.

She’s absolutely stunning and has an undeniably strong presence in every scene she’s in. Phipps has a carefree, relaxed attitude that both displays her troubled character and elicits sympathy from the viewer. That’s a tricky feat for any actress, and Phipps nails it.

Her performance truly elevates the already intriguing story and makes Close Calls an even better film. Take note, she should be a star someday.

Close Calls is an all out awesome Gothic/suburban horror ghost story filled with quirky and outrageous characters, unforeseen plot twists, and a deadly mystery at its center.

The story moves like a shark, and I had no idea where it was headed or what would happen next, but I had a blast watching Morgan’s nightmarish journey.

Keep an eye out for Close Calls. I loved every minute of this movie!