Director Riley Stearns talks about his Sundance film, the sci-fi thriller “Dual”, plus making people laugh and being a good indie filmmaker.

As writer-director Riley Stearns puts it, his latest movie Dual is your standard duel to the death with your clone movie. Making its world premiere at the Sundance Film Festival, the film is about a woman named Sara (Karen Gilan) who learns she is dying. In order to ease the pain for he loved ones, she decides to get a clone. Things do not go quite as planned. We talked to Stearns about the movie, comedy, and who would win the ultimate duel.

Morbidly Beautiful: What was the inspiration behind Dual?

Riley Stearns:  I had this idea for a short film that I never ended up making, and I wrote the script for, where an actor ends up at the end of the short interacting with themselves. And even though I wasn’t able to make that short, I really wanted that sort of a thing to happen in a feature. And so, I reworked the idea, thought about it more, and then came up with the idea of your standard duel to the death clone story.

It’s funny because that part of the movie came about pretty naturally. It was really like finding the right emotions that I wanted to mirror in this pseudo-sci-fi heightened reality that is the world of Dual. I really wanted it to feel like people could relate to it, whatever their life experiences were.

And so far, and working with people on the movie, whether it’s my composer or my cinematographer or my parents watching it or whatever it is, everyone’s been able to find parts of themselves in it, which is really nice because that’s what I hoped. But I didn’t think that it would fully succeed in that way, at least to the levels that it has, which has been pretty cool. 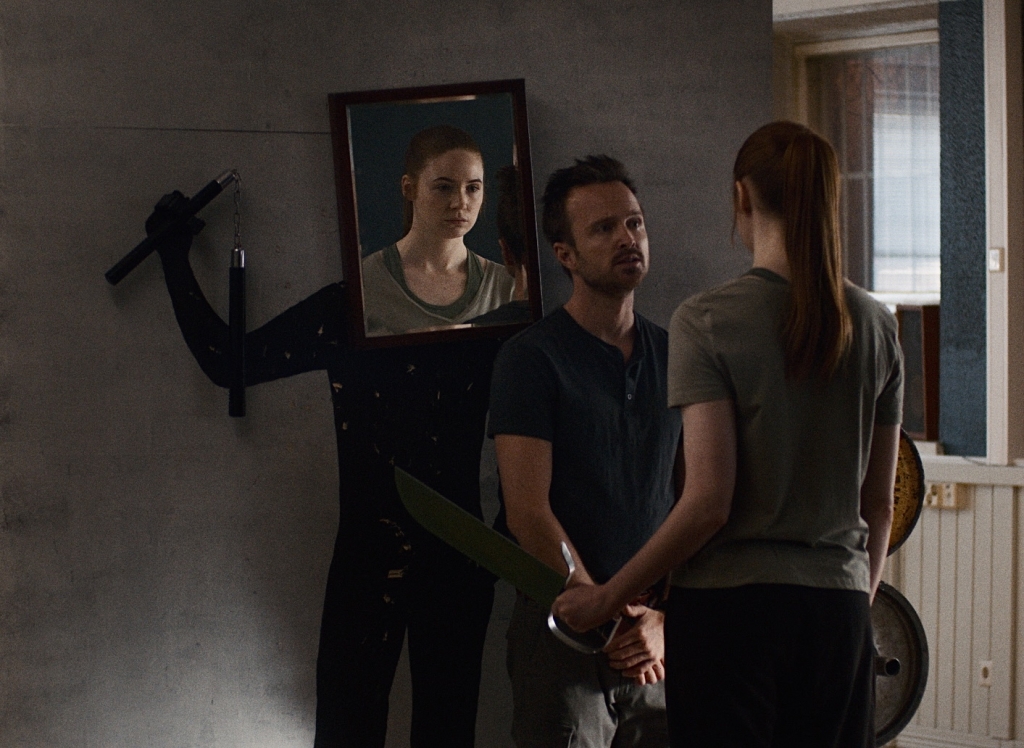 Morbidly Beautiful: Sara is a very interesting character. She’s very matter-of-fact. When she does show emotion, you really feel for her. Is she based on a real character or was that something that came wholly from your mind?

Stearns:  Everything that I write, especially the lead characters, tends to have a bit of myself in them. And I think that it’s impossible not to because it’s coming from your brain. But no, I mean, she’s her own person and she has her own life experiences. But yeah, you find ways to put yourself in that character.

And that’s always fun in doing something that’s not necessarily a literal translation of your experiences, but at least gives you that feeling of, I can catch a moment of myself in this moment, or I wouldn’t have done it that way, but the way that she does it, I could see how maybe my way isn’t that different.

And again, going back to everyone watching, I feel like other people have been able to find that in themselves as well, a bit of Sara themselves. And so, yeah, I think that that’s fun for me, instead of doing something that’s very literal in translating a real person into something, or myself into something, trying to find something where everyone can relate. Morbidly Beautiful: Dual filled with dry humor. Was this a byproduct of the writing or did you go out to intentionally make this subtly funny?

Stearns:  Yeah. Well, this is my third feature now and everything’s had that tone because it’s just the nature of how I tend to write and think about things, always coming at something saying whether it’s going to be a little dark, or a little bit more comedic or whatever it is. I do want that through-line of humor to be there, to be ever-present.

But it’s not humor in the sense that I think most of the time we’re used to seeing it, nothing’s ever really a joke per se. Everything’s a little bit more just the ridiculousness of a line or the nature of the way that you say something. That’s where I find a lot of the humor lies, in my writing.

And so yeah, working with the actors and trying to figure out the best way for their character to say a line or to react to somebody saying something kind of crazy. Do you actually react to it or do you act like it’s totally normal that they said that? That’s fun and that’s just been a byproduct now of the way that I tend to work.

Morbidly Beautiful: At its core, Dual is a violent story, but little violence is shown.

Stearns: Yeah. I think that there’s enough violence in real life anyway. And so, not being political about it or anything, because I do have some moments that are pretty violent or maybe linger a little longer than is comfortable. But I think that you can watch a movie where superheroes murder or villains murder a million people in a city or something, and you don’t really think anything of it. But that’s a bunch of people dying.

And then in this movie, you see the aftermath of somebody being stabbed to death and you hold on to it for a second and you get to say, “Oh, that’s really death right in front of me.” Or later in the film, there’s a moment where a character’s introduced to death right in front of her, and that stuff is more impactful to me and says a lot more than seeing a bunch of people just get shot in a building and our hero jumps out the window and escapes everything.

And if I’m going to use the violence, I want it to be for a point. And I think that this movie, when it’s talking about violence or when it’s showing it, it’s always there for a reason.

Morbidly Beautiful: There is little interaction between the clones. Why did you go that route?

Stearns: I did want there to be the separation, for the sake of Sara to be able to figure out who she was outside of the context of this relationship. I think that that was important, I like that when they do sync back up, you’ve wanted it to happen and you’re ready for it, as opposed to it being throughout the movie where you get a little bit tired of maybe seeing them opposite each other.

There’s a logistic element too. I was trying to be a good indie filmmaker. 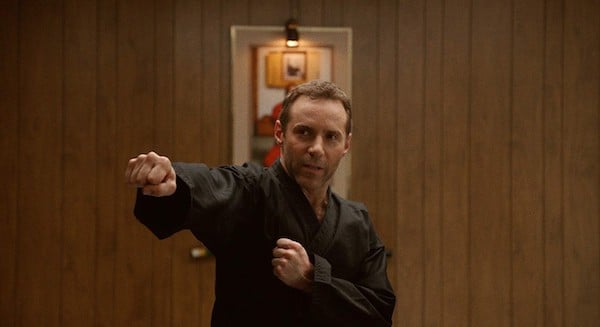 Morbidly Beautiful: Who would win in a fight between Trent and Sensei, from The Act of Self-Defense in a duel?

Stearns: Man, that’s a good question. I think Sensei is probably more of a legit fighter, but Aaron Paul’s character, Trent, has no qualms about using guns and weapons. So if they came at it from that perspective, I think Trent would win. But if it was a hand-to-hand combat thing, I think that Sensei would win. But I’m glad we’ll never have to see that fight because I don’t know, that’d be kind of crazy.

Dual premiered at the Sundance Film Festival on January 22, 2022.