Beautiful and chaotic, “Prisoners of the Ghostland” takes viewers on a wild ride with Nicolas Cage in the driver’s seat; a must watch. Seems like that’s all it takes to garner instant interest in a film, as the actor has achieved living legend status in the eyes of many genre fans (and for good reason). In his latest, Prisoners of the Ghostland, Cage plays Hero, a ruthless, imprisoned bank robber set free by a wealthy warlord known as The Governor (Bill Moseley, even more to get excited about), and tasked with finding The Governor’s kidnapped “granddaughter”, Bernice (Sofia Boutella, always exciting, in more ways than one).

Taking place in the post-apocalyptic Samurai Town, Cage’s Hero is strapped in a leather suit set to self-destruct in 5 days, including detonators located in the vicinity of each testicle (testicuule, The Governor pronounces it), and encounters gunslingers, ghosts, samurai, and a crazed cult.

The end result is a movie just as wild as you would imagine, an enormously entertaining adrenaline rush that brings the Cage Rage. 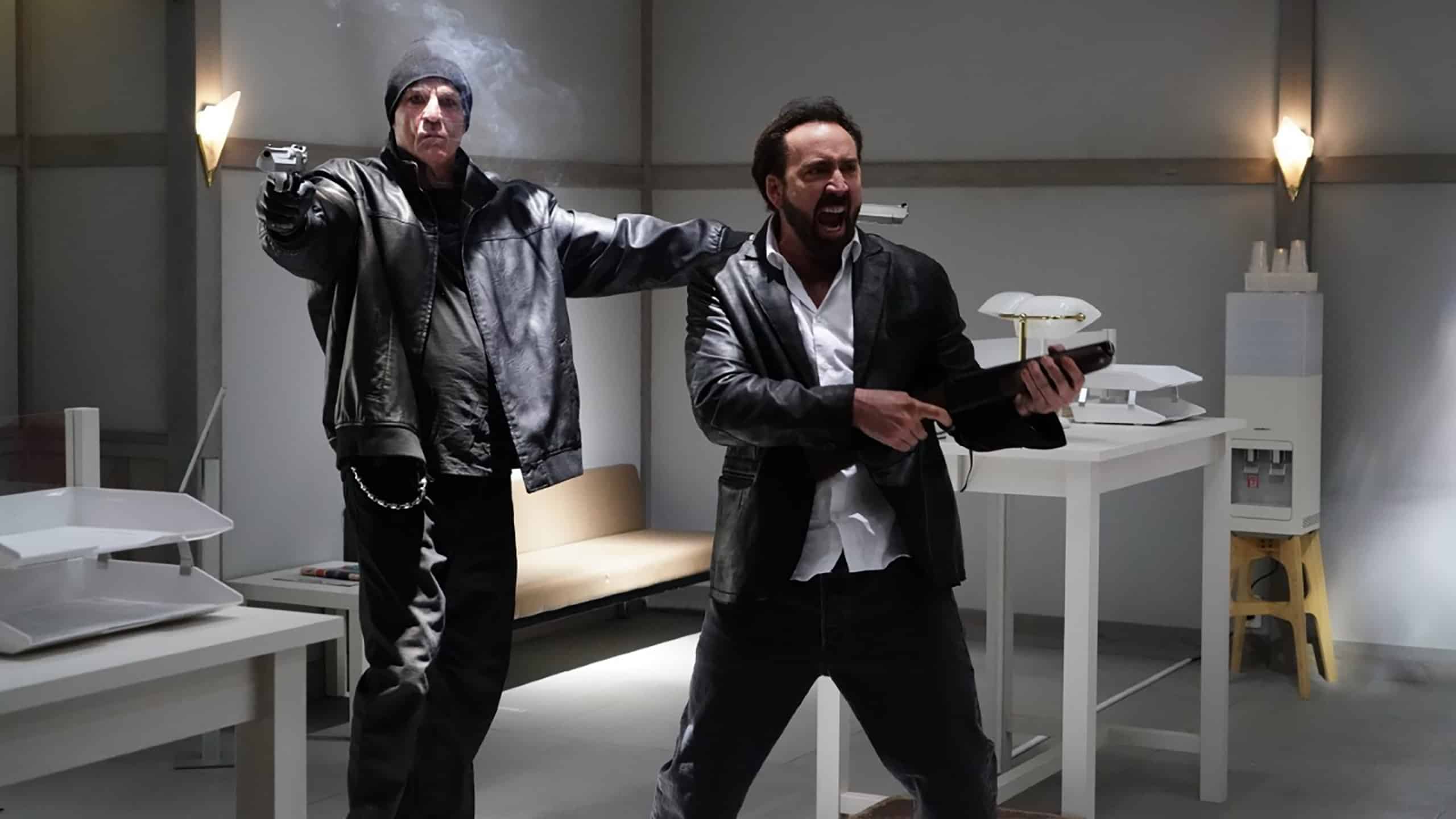 Once the film is set up and our Hero is on his journey, the film has plenty of unexpected laughs and is very funny at times. It almost works as a spoof of the Western, action genre. “What a badass,” “he’s so cool,” say a couple of awestruck onlookers as Hero chooses a dainty bicycle with a basket instead of the black sports car when he leaves on his journey. He does eventually end up with the car because, tick tock, the clock is ticking on that deadly leather jumpsuit.

While looking for Bernice, Hero is lead to a torched, windswept landscape with crumbling mannequins swaying back and forth, cracked and broken shells that conceal prisoners inside of them. Every turn in this world holds a different danger, a threat to end Hero’s life at any moment.

And all of this is handled with such confidence by director Sion Sono, creating a thrilling and playful and insane world of filthy neon. Imagine Mad Max as a supernatural Samurai Western.

In the middle of all this madness is Nicolas Cage, wonderfully off the wall and right at home in such a place. It feels as though the film was inspired by Cage’s reputation playing odd characters, giving the film a match-made-in-heaven quality.

If Cage gives Prisoners of the Ghostland its unlikely (anti) hero, it’s Sofia Boutella as Bernice who gives the movie its glimmer of hope. It’s Bernice we root for, as she’s the possibility for a brighter future in the Ghostland. What an exquisite performance from Boutella alongside the scene stealing Cage.

There’s a religious-like fixation on time in the Ghostland.

The inhabitants hold the giant clock displayed on the bones-like structure of an old capital building at 8:14, fearing if it hits 8:15 the atomic blasts will once again wreak havoc. The people who live under The Governor refer to him as a clock, as time itself. In the Ghostland, everyone is a prisoner to a forgotten existence, to a lifestyle lost. Time has vanished for the prisoners of the Ghostland, only recognizable in the form of their rulers.

This fixation with time really pushes Hero’s race against the clock to the forefront, as well as any hope the future of the Ghostland has left.

Prisoners of the Ghostland presents a unique vision from filmmaker Sion Sono. (It would make for a great double feature with Ana Lily Amirpour’s The Bad Batch).

A bloody, dirty, balls to the wall, gorgeous looking blast of color, chaos, and redemption in a land of hopelessness. Nicolas Cage leans into his Nicolas Cage persona, Bill Moseley has fun as a smooth talking, white suit wearing cowboy, and Sofia Boutella steals the show with a subdued, beautifully heartfelt performance.

Big time entertainment, Prisoners of the Ghostland is a must see.