As part of #GivingTuesday, Women in Film is raising money to support the Women In Film Sexual Harassment Help Line, and you can help.

While we love those Black Friday and Cyber Monday mega sales as much as everyone, it’s Giving Tuesday that really puts us in the holiday spirit and reminds us what this season is really about. This worldwide day of giving was created in 2012 as a response to commercialization and consumerism in the post-Thanksgiving season. It’s a chance for us to be a part of positive change in the world.

While there are so many worthwhile organizations in need of your support, we wanted to share one particular opportunity for giving that is very closely aligned with the values of this website and the community we’re proud to be a part of.

We received the press release below from Women in Film, an organization whose mission is to create gender parity in the film, television, and digital industries. At all levels, Women in Film aims to create avenues for career education and advancement. This worthwhile organization is currently raising funds to launch its new Sexual Harassment Help Line.

The official release and donation information is below. We hope you’ll consider being a part of this important initiative to provide support, resources, and advocacy for those struggling to fight back against sexual harassment, assault, and predatory behavior in the entertainment industry.

Since early October, the world’s attention has been focused on the unfolding story of countless allegations of sexual harassment against many powerful men in the entertainment industry. Hundreds of brave people are coming forward to share their stories of survival, and many more continue to give voice to this problem that has existed in our industry and others for generations.

Having been at the center of discrimination advocacy on behalf of women for decades, and more recently having financed and guided research and a multi-year awareness campaign to expose gender disparity throughout the screen industries, Women In Film, Los Angeles, has stepped up to the challenge of providing a safe haven for victims of sexual harassment across all disciplines of entertainment, including film, television and music. 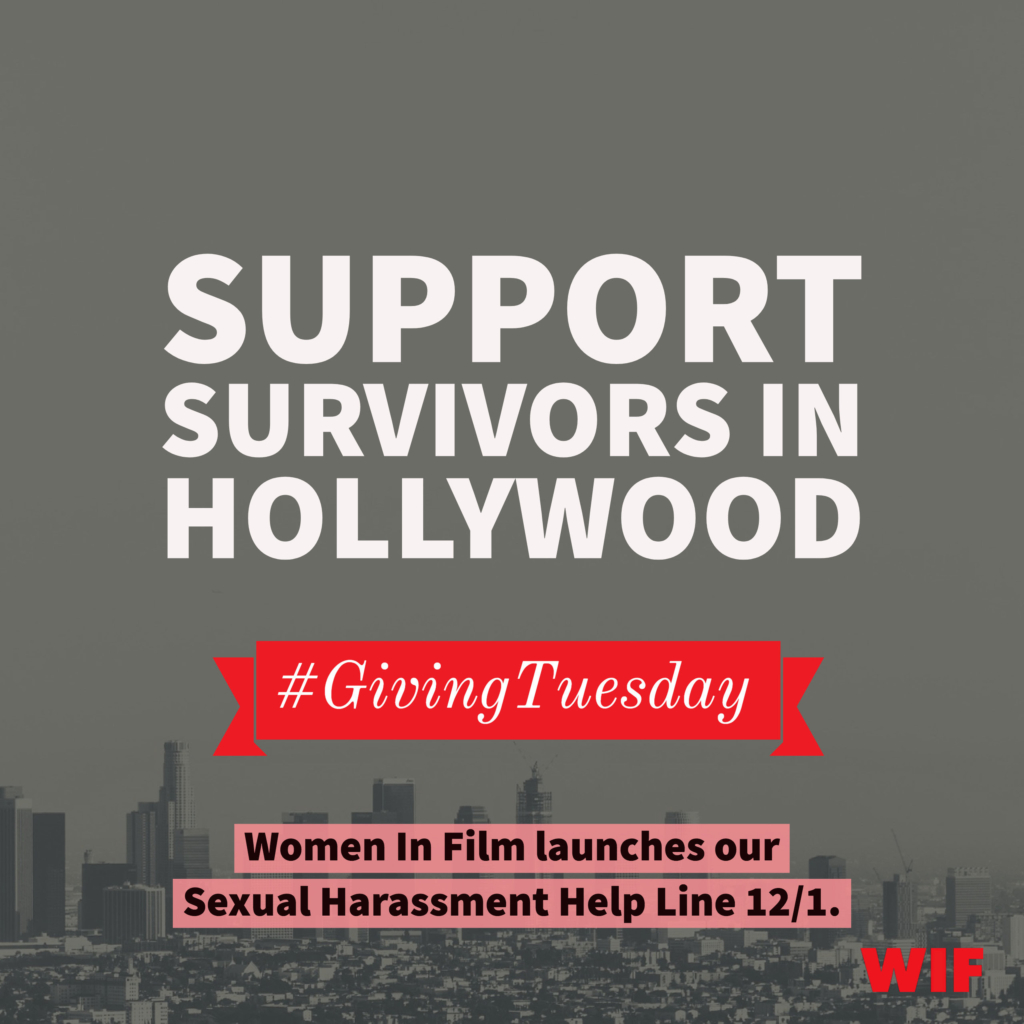 On November 9, Women In Film announced a new initiative–a Help Line, with the purpose of guiding survivors to the help their situation demands. Women In Film’s Sexual Harassment Help Line is an integrated program to refer anyone in need of assistance to designated mental health counselors, law enforcement professionals, and civil and criminal lawyers and litigators.

Founding Partner WME has provided seed funding to launch the Help Line. Our goal is to raise the remaining $25,000 needed to get the Help Line up-and-running by December 1.

The mission of Women In Film is to advocate for and advance the careers of women working in the screen industries–to achieve parity and transform culture. Your contributions to the Help Line will, indeed, help us transform culture in a very immediate and meaningful way.

Click here to donate now. Any amount will help us reach our goal. Be a part of making a difference. Be a part of Giving Tuesday, and give to those who need our help.