An apt metaphor for Internet and social media obsession, “Deadcon” is a supernatural horror film that feels surprisingly and terrifyingly real.

The second full feature film by the director Caryn Waechter forays into the world of social media influencers and YouTube celebrity. It takes a dark turn into things that aren’t a real flesh fanboy or girl, but instead something supernatural that craves human beings.

The film begins circa the 1990s where an early board owner is about to lose everything after his company’s chat client known as LinkRabbit fails at VidCon. As his bosses prepare to shut him down, a mysterious person named Bobby joins his chat room and asks if the man can help him meet people in real life. In exchange, he agrees to help save LinkRabbit. Desperate to save the company he has invested his life’s savings in, he agrees to Bobby’s terms.

Years later, in Los Angeles, a convention called ViewCon is underway at the same hotel that once hosted VidCon.

YouTube and Instagram influencers, along with hordes of young fans, have descended upon the hotel. AK Ashley, a celebrity vlogger played by Lauren Elizabeth, real-life YouTube star, has arrived along with her manager.

Ashley wants to quit. She has had enough of fans and the constant pressure. She doesn’t want to be at ViewCon — or a part of nonstop social media frenzy. However, her manager pushes her to keep going. When she arrives at the crowded hotel, she finds her room has been overbooked. After her manager throws a fit, the hotel manager gives her the keys to a room that’s been out of service for some time. It’s a room with a dark history, haunted by an evil presence from the past. 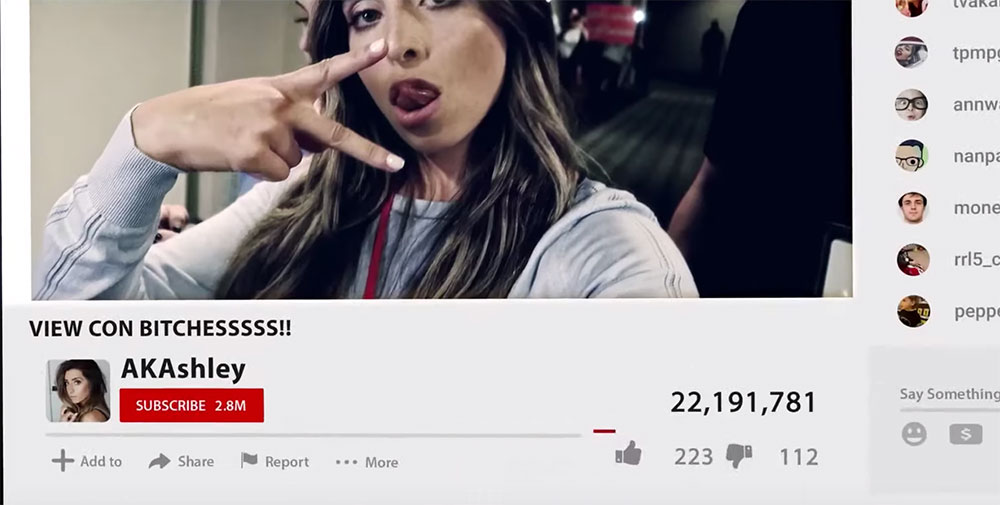 Another social media influencer in attendance is Megan, played by Claudia Sulewski, another real life YouTube and Instagram star. She has the room next to Ashley. The two know each other. But as competitors, they are only politely friendly to one another. Megan has other issues as well. Although she is publicly dating another social media star, Ricky (played by Lucas Gage), she is sneaking around with another man named Dave who she really likes.

So, while Ashley struggles to break free from a life she no longer finds fulfilling, Megan struggles to choose between her heart and her career. And while Dave pressures her to break things off with Ricky and come public about their relationship, fear over fallout and loss of viewership keep her trapped.

But things are about to get much worse for both women.

After attending a panel, Ashley comes back to her room to discover her room ransacked. She also finds a strange old Polaroid of a young boy. Ashley decides to take a bath, and the entity initiates its move. Meanwhile, members of the hotel staff refuse to even enter the room, knowing something is not right.

As Ashley and Megan are staying in adjoining rooms, when things go sour for Ashley, Megan soon feels the power of the being that craves human company.

After a while, Dave discovers the history of the hotel room and LinkRabbit, the ancient chat room. He learns the sinister background of the man and Bobby, and he knows he has to get Megan out of the hotel immediately. But getting out won’t be that easy.

The film is well-edited. And the storyline, considering the limited acting experience of the stars of the film, is intriguing. The film feels like a cross between The Shining, Room 1408 and Poltergeist. Many scenes felt like an homage to these films. It was also a clever twist to cast real Internet stars in a film about the dangers of obsessive online culture and celebrity.

Waechter has a careful eye. And even with the lower budget, she makes the film feel crisp and believable.

The stylistic tone of the film makes you overlook aspects that challenge reality. The pace is slow enough to develop a sense of dread throughout, and a feeling of certainty arrives at the film’s climax.

It’s not Oscar worthy. But it’s not bad. And it sets up an interesting analogy about how celebrities, viewed by millions, can often be a lonely and lost group of people. They too often get sucked up into the machine, where humans become commodities. And it becomes about the product, not the people.

Deadcon makes a frightening point about the fickleness of fame — and how the circus of celebrity and fandom can drive individuals to tragic ends, even as the wheel of commerce and consumerism keeps turning.

Want a second opinion? Click here to read an alternate take on Deadcon out of Cinepocalypse.