“Deadcon” is a modern technological thriller with a macabre message — a cautionary tale for all children of the Internet generation. 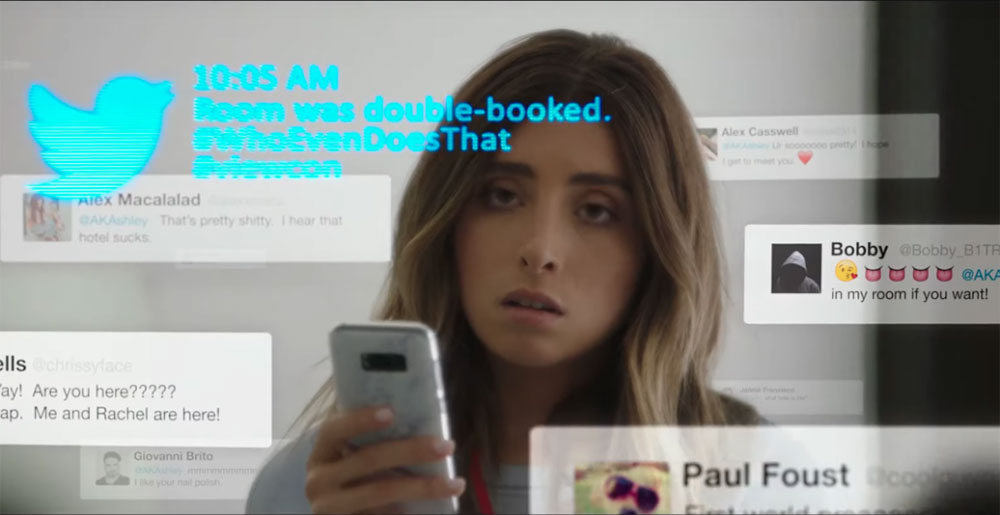 Directed by Caryn Waechter and written by Scotty Landes, this film follows a group of Internet “influencers” at ViewCon, which is based off VidCon, one of the premiere social media and multimedia conventions in the United States.

DEADCON follows internet sensations Ashley (Lauren Elizabeth) and Megan (Claudia Sulewski) as they meet and greet with their fans and find their exquisite stay in the convention hotel may not be exactly what they were expecting as convention VIPs. Interwoven in the bright, tech-savvy narrative is an undercurrent of the supernatural where a young boy, Bobby (Judah Mackey), is trying to recruit new “friends” from beyond the grave.

For a PG-13 horror film, which typically gets a lot of flak from horror fans (myself included), DEADCON packs quite a punch.

The scares don’t feel cheap or rushed. And it’s all too easy to get immersed into the cyber world that Waechter creates by using various forms of social media platforms (Twitter, Snapchat, Instagram, etc) to suck her audience into the influencers’ world. Whether you like or dislike social media influencers and YouTubers, there is an underlying current of how we, as a society, have become dependent on social media and our various technological devices to make friends, network, and stay connected.

At a Q&A that followed the film, director Waechter herself said, “Technology is killing us.”

And that succinctly wraps up the overall theme of the film.

The film is scary because it’s relatable. And while it doesn’t have some of the deep, terrifying imagery that more hard-core fans of the genre may enjoy, DEADCON relies on thrills audiences have seen in recent films like Unfriended — and even older films within the technology horror sub genre like Videodrome and FearDotCom.

Even though the film itself is geared towards a younger audience – DEADCON is enjoyable for a more mature audience as well.

It’s a film that might be especially frightening for the parent of an Internet-obsessed teen or pre-teen. The narrative fits equally in the paranormal horror sub genre as it does in the technological horror space, due to the background about an early chatroom program that has been possessed by the spirit of a lonely little boy.

Interestingly enough, Waechter cast actual influencers in the film for some of the roles. She explained that during takes of the film, many of her cast members were live streaming and working because their job requires them to stay constantly connected to their audiences. It’s this theme that gives the film what is, in my opinion, the most potent message and the most heft.

It shows how we as a society have become so constantly connected to other people through the Internet and social media. Yet we’re still isolated because the cold comfort we get on the other side of the screen may or may not be a genuine connection. In DEADCON, this is explored in an insidious fashion that may very well make teenagers question just how much time they allow their lives to be run by social media platforms and Internet “friends.”

While it is a bit conservative with the violence and kills, DEADCON is still certainly an enjoyable, 21st century thriller for modern audiences.

It’s a contender for top billing in an emerging sub genre of horror film. Silence your phones and check it out when it hits a theater or festival near you. 4 out of 5 stars.