The Crusades Of Team Warren Continue In The Highly Anticipated Sequel to Smash Horror Hit, “The Conjuring” 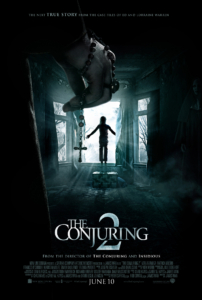 Tucked away within a swanky cluster of apartment homes and condos sits my favorite Alamo Drafthouse Cinema location in Austin, the one at South Lamar, boasting an entryway adorned with carpet from the iconic film The Shining. On Friday May 13th, I attended a free Victory member screening of The Conjuring. I really rather admire James Wan, and have since the inception of the genre game-changing franchise of SAW, which offered horror aficionados a new level of theater going depravity. Wan is a magnificent storyteller in my opinion, and I was excited to experience the original film again in anticipation of the upcoming addition to the story.

To the complete surprise and horror geeky glee of yours truly, the sold out crowd was informed, after a ghost story and drinking contest with Mondo prizes, that we were in fact NOT about the watch The Conjuring. Instead, we were going to be the very first audience in the country to watch the sequel, The Conjuring 2, and none other than Wan himself was there to tell us this.

In his remarkable Australian accent, Wan endearingly seemed a bit nervous as he shared with us that, only three days previously, the film had been completed in post production. We would be experiencing a ‘wet digital print’. The rest of the crowd was just as stunned as I was. As the lights dimmed, I could sense we all were all in a pleasant state of shock at this unforeseen cinematic gift.

Returning to portray the real life husband and wife demon hunting team of Ed and Lorraine Warren, is Vera Farmiga (Bates Motel) and Patrick Wilson (Hard Candy). In this sequel to the highly successful original, among the string of hits Wan has delivered, The Conjuring 2 opens with an extremely creepy reenactment from the world famous haunting in Amityville, New York (1976).

The nation was in a stir after the news of severe paranormal phenomena experienced in a sleepy suburban town. Not long prior to a new family moving into the waterfront home, the Lutz family, a young man by the name of Ronald DeFeo, Jr. — supposedly possessed by a demonic entity — calmly and methodically walked through the historic home and shot his entire family. The level of activity subsequently experienced in the Amityville home at 112 Ocean Avenue prompted Lorraine and Ed to visit, lending their expertise in an attempt to ascertain what exactly was going on in the home.

This is where the dark and ominous tone of the movie is established, within the first opening minutes. Reenacting the events in New York, the film recounts the seance conducted. The images upon the screen become very uneasy, and we witness what is like for Lorraine to be in her trance-like state, tapping into her extra sensory perception. It’s surreal and in slow motion almost, seemingly isolated but with the feeling of being watched and studied, sized up by something Evil. We walk in step with Ronnie DeFeo, Jr. as he puts shotgun blasts within each of the six members of his family, infamously marking the day of November 13, 1974, within the annals of American crime and paranormal activity. 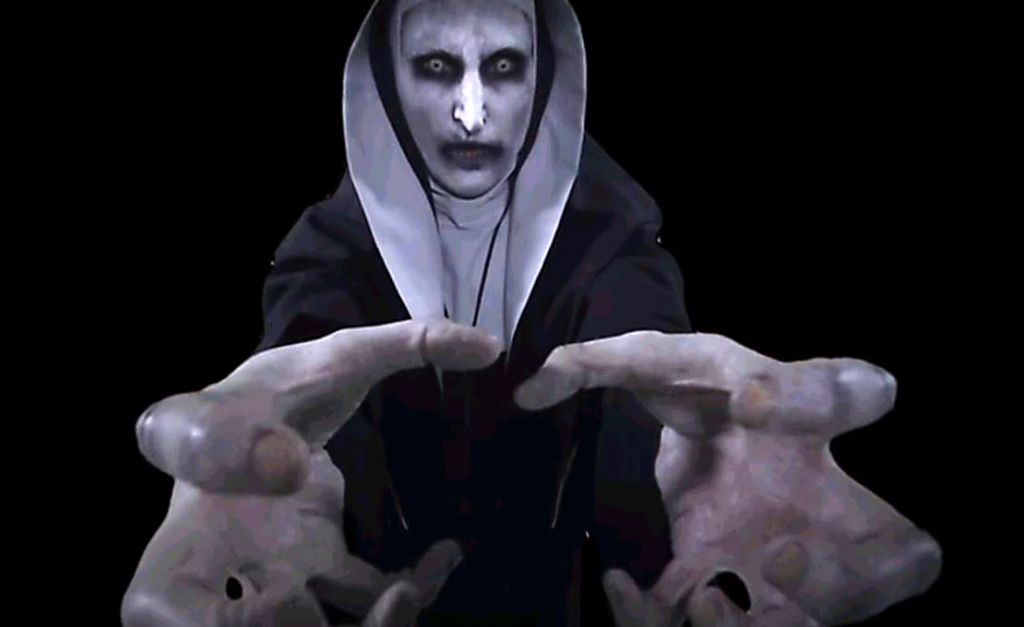 The seance rocks Lorraine to the core, and we meet just one of the malevolent characters from The Conjuring 2, a rather sinister Nun. To me, she resembled Marilyn Manson on PCP. The encounter gives a grave warning which Lorraine tries to take heed of, pleading with her husband Ed that they take a break and step back for a bit. She says that what she experienced there “was the closest to Hell she has ever been.” He reluctantly agrees.

The exquisite camera work and direction are also established within the opening scenes. Beyond just effective lighting, there seems to be considerable talent on the entire camera and editing crew. This sets the necessary foundation for one hell of a fright-filled ride, which comes complete with sweeping shots and meticulous framing.

Following on the heels of the Amityville haunting, the unnatural occurrences in Enfield, England, were being hailed as the European equivalent. At this time, we are introduced to single mother Peggy Hodgson and her four children from Enfield, the center of the main storyline. During this scene, I took note of how solid the soundtrack was, giving perfect aim to the sound of the times… a consistent theme in the film. For example, in one scene Wilson’s character whips out a guitar to complete a wonderful rendition of Elvis’ “I Can’t Help,” in hopes of comforting the family in need and reassuring his beloved and devoted wife. 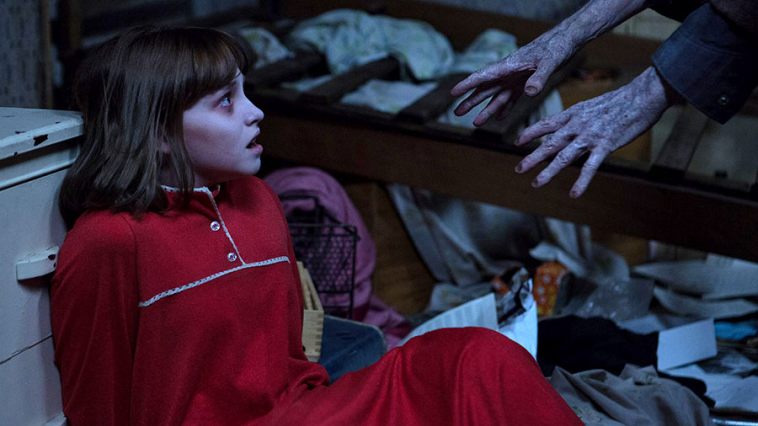 We soon learn the source of the nefarious happenings in Enfield… none other than a damn Ouija board, the Devil’s plaything. The middle Hodgson child, Janet, constructs a homemade Ouija board with a friend from school. As is typical in horror films, when the innocent mess with this tool of otherworldly communication, strange occurrences begin within the modest home of the children and mother. These include Poltergeist-like encounters with toy firetrucks and furniture and demonic sleep talking, coupled with sleepless nights on the account of incessant banging and harassment from one particularly nasty spirit.

And that’s just the beginning of a frightful affair, which is even more terrifying if you believe the claim that this is based on true events. The events of Enfield are, in fact, well documented, with neighbors and even Police officers witnessing the stunning paranormal activity. This places the film somewhat apart from many others, as so often the haunting activity is centered around one individual, leaving them vulnerable and alone. 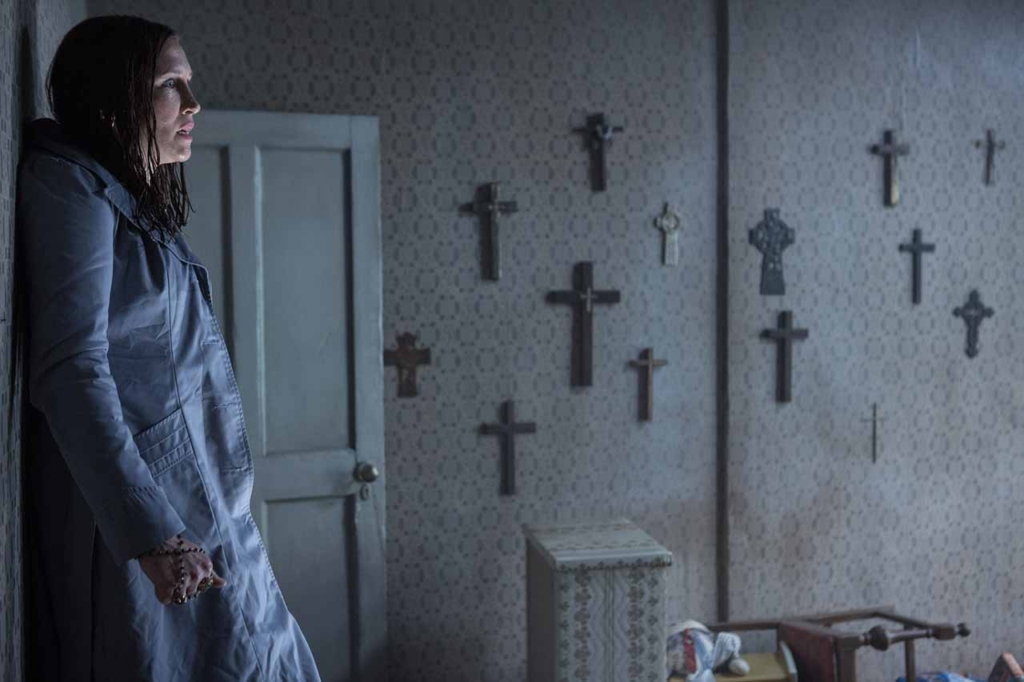 Some of the jump scares are expected, and the end may seem trite to some. But this really was an overall enjoyable film. It’s dark, and the technical achievements alone were remarkable. I also enjoyed the fact that not just one harmful spirit was on the loose after the innocents. I’ll let you watch and see for yourself just exactly what i’m speaking of. It did run a bit long in my opinion and a little drug out. The conclusion possibly could’ve successfully come many minutes before the actual ending. However, the cons of The Conjuring 2 pale in comparison to what I find effective about this heavily anticipated flick of historic hauntings.