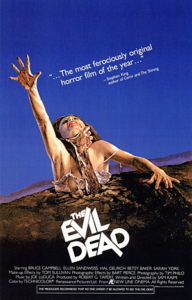 Synopsis: 5 youngsters go to stay in a cabin in the woods for the weekend but those meddling kids get more than they bargain for when they find a bunch of old tapes and decide to play them. They inadvertently awaken some demons from their ancient slumber and they’re not too happy about it!

If there is one film that has remained a consistent favorite over the years, it’s The Evil Dead. It’s a film that I never tire of and it’s still the creepy, entertaining and fiercely independent film that I found it to be when I first watched it. If you want a film that has heart, then The Evil Dead is your guy. Our protagonist – Ash (Bruce Campbell) has become a massive horror icon and went on to star in two other Evil Dead films, was featured (uncredited) in the remake from 2013, and currently stars in the televion show Ash VS Evil Dead.

This was the first feature length film by director Sam Raimi, and he unknowingly began one of the biggest cult followings in all of horror history. The original crowd-funded film, Raimi was forced to beg in some cases to raise the money needed to make it. And, despite not raising as much as was required, the innovative filming techniques and basic special effects were done brilliantly. There was no steadicam in this film, instead we have shakycam. Just a camera on a piece of wood which works brilliantly when we have a traveling POV shot for the unseen terror that is lurking in the woods.  The ferocity with which it moves through the woods is thrilling and you never know quite what it is that is moving through those woods.

The production of this film was definitely tough, and from what the actors, Sam Raimi & Tom Sullivan (special FX) have said, it consisted of weeks of not showering and basically getting bruised and beaten. The crew were forced to stay in the cabin that they filmed in and go through a grueling schedule of 18-20 hour work days, bad food and arguments aplenty due to everyone being in such close quarters. Despite what I’ve read about the conditions that they filmed in, the fact that such a film came out of it is really commendable for everyone involved. 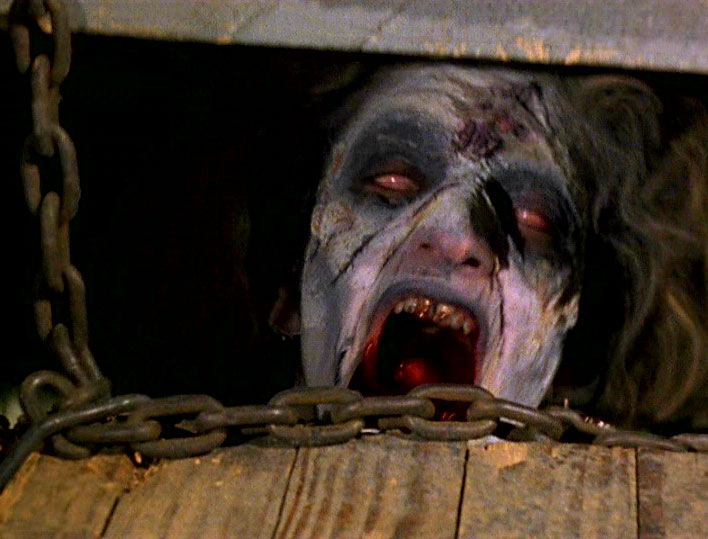 The four characters that we have in The Evil Dead are two couples and Ash’s sister Cheryl who is the first to be possessed. Scotty & Ash are the tough men of the day and then there is Linda (Ash’s girlfriend) and Shelly (Scotty’s girlfriend). From the start it’s established that Cheryl is a bit of an odd, nervous person. So, when she first starts to sense that there is something in the woods, there is a lot of disbelief. The infamous tree rape scene happens (yes, tree rape), and Ash tries to get her to the town just to calm her down before she goes mad. The faceless horror doesn’t want to let them leave, and one by one they are picked off.

The effects that are used for the possessed characters are brilliant, and the most recognizable characteristic is the thick white lenses that are used on their eyes. Bearing in mind that they are blind whilst wearing them, it doesn’t affect the quality of the acting. There is no shortage of disgusting, bloody gore in this film, and my personal favorite has to be the pencil that’s  jammed into Linda’s ankle. That shit never fails to make me cringe inside, and there’s plenty more to lap up.

Thank you. I don’t know what I would have done if I had remained on the hot coals burning my pretty flesh.

The Evil Dead is paced well and it gets straight in to the action. I never find myself becoming bored at any point during viewing, and every shot feels like it is there for a reason with the story continuously moving forward. It’s the original cabin in the woods film and, despite a low production value, it has high entertainment value. I felt genuine fear in places. Cheryl in the cellar still creeps me out to this day, as well as Linda sitting in the doorway giggling like a little schoolgirl whilst licking a dagger covered in blood. 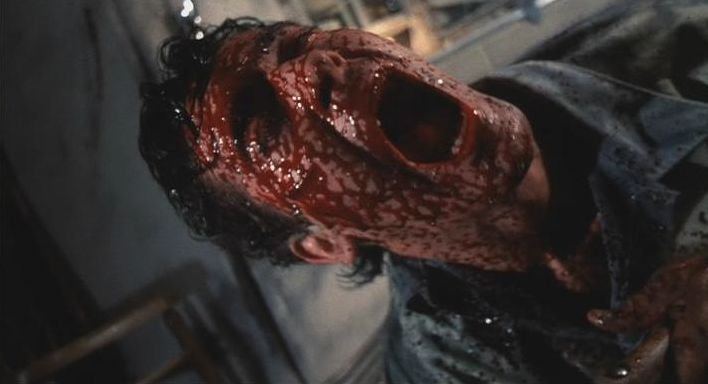 One thing to mention is the camera angles that are used. We are put right in the action with intense close-ups and the few panning shots allows us to see every detail of what’s going on in the cabin environment. It is this quality of film-making that has made The Evil Dead the legend that it is. We’re watching Ash lose everything in this film; his sister is a demon, his best friend hacks his girlfriend into numerous pieces and he’s then forced to behead Linda. It’s the sort of thing that would put you off holidays for life. The audience is on a journey with Ash, and we’ve been with him ever since, right up until the current TV series.

I can’t praise this film enough, or indeed the Evil Dead franchise. As far as it’s video nasty status goes, it was put on to the DPP’s list and subsequently removed in 1985 after distributors successfully argued that it was not obscene. It had initially been passed in 1982 as a cinema release with 49 seconds of cuts, but concern then arose at the prospect of it being released on video and so being available unrated for children to possibly watch. The style of it is quite different to other video nasties, and it certainly has a different tone with the horror seeming slightly more comedic than its fellow nasties. If you’ve seen The Evil Dead then I can only assume that you love it just as much as I do. BUT, if you haven’t seen it, then you must watch it immediately, followed by Evil Dead 2 and Army of Darkness.