The Sacrament is a 2013 film produced by Eli Roth and directed by a great visionary director TI WEST. I’ve been a fan of  West since his first segment (“Second Honeymoon”) in the movie V/H/S (2012). He also did a segment for THE ABCs of DEATH (2012) (“M is for Miscarriage”). But one of my personal favorites from the director is 2009’s The House of the Devil. Needless to say, I was really looking forward to checking out this latest film from the groundbreaking indie horror filmmaker.

DISCLAIMER: Before I dive into my review of The Sacrament, I must warn that there will be spoilers ahead. We’re going to dig deep into the plot of the film, and it’s impossible to properly review this film without revealing some context that may diminish your enjoyment of the film upon first watch. I strongly recommend, if you haven’t seen this film already, that you stop reading this review and head over to Netflix to experience this movie untainted. You can also skip to the end of this review and read my “Final Thoughts” for a spoiler-free summary of my thoughts on this movie.

The movie starts off with a black background and in plain white bold letters it explains that VICE is a New York-based multimedia journalist company focused on international news, arts, & culture. Available in over 34 countries, VICE is known for covering the provocative & controversial stories usually overlooked by mainstream media. The screen fades to black and the first scene introduces our main characters of the movie. Sam Turner (AJ Bowen) is VICE’s correspondent and Patrick Carter (Kentucker Audly) is its best freelance photographer.

We learn that Patrick’s sister, after struggling with drug addiction, left New York to join a sober-living community in rural Mississipi. Patrick receives a letter from his sister asking him to come for a visit. He is not given her exact location… only instructions of where to fly in to and a note that a helicopter would be waiting to take him the rest of the way. Despite the odd secretive nature of her communication, he makes plan to meet his sister. Meanwhile, Sam convinces Patrick to let him and another member of VICE tag along to document the bizarre trip. A few seconds later, the screen fades to black and in white bold letters the title of the movie fades in.

Now the movie proper begins with the trio traveling to the location of the helicopter so they can be transported to the secret location of Patrick’s sister. I absolutely loved the beginning scenes of the men in different airports. We see some beautiful night city landscape out of the window of the plane, along with a great background song by “The Knife called Heartbeats”. This song is also played in the movie Donkey Punch (2008), which is a great UK horror film worth checking out. 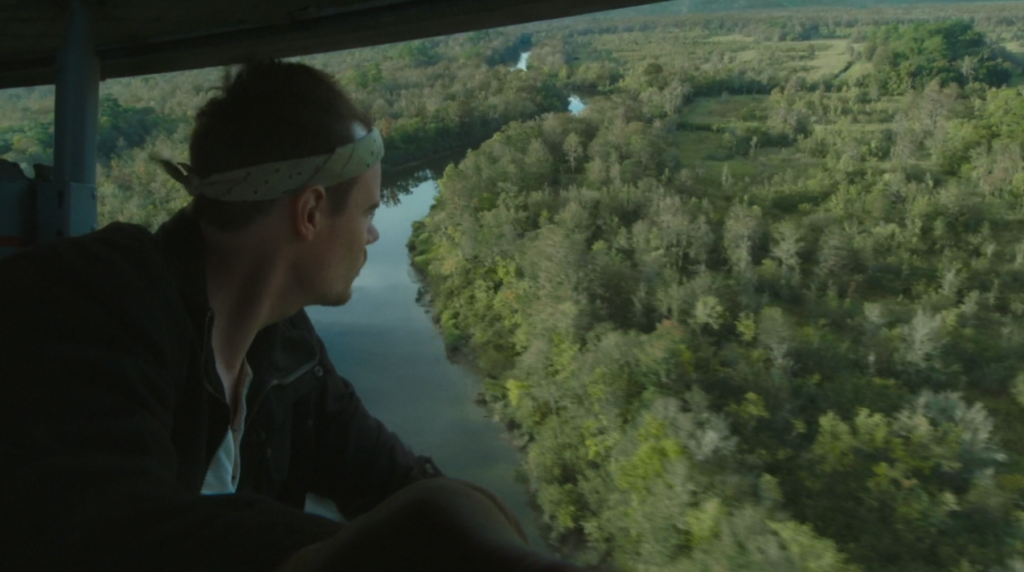 As soon as they land, the helicopter pilot says, “I’ll be back tomorrow at 8 a.m. I’ll wait for one hour, and then I’ll leave with or without YOU!” Thus, we now know that course of the movie will take place over one day at this supposed sober-living resort. The time is 1:15 local time. As  soon as they get out of the helicopter, they encounter two imposing guards. They need to get clearance for the two other members of VICE that Patrick has brought along. The guards relent and place the men in the buck of a truck.

At this point, we finally meet the third character, Jake Williams (Joe Swanberg). Jake, Sam, and Patrick pile into the back of a truck and travel 2 kilometers to the parish. We learn there’s only one way in or out of the community. We get some nice shots of the woods and trees along the way. When they finally reach the gate, another guard shows up with a machine gun and demands the trio immediately stop filming. 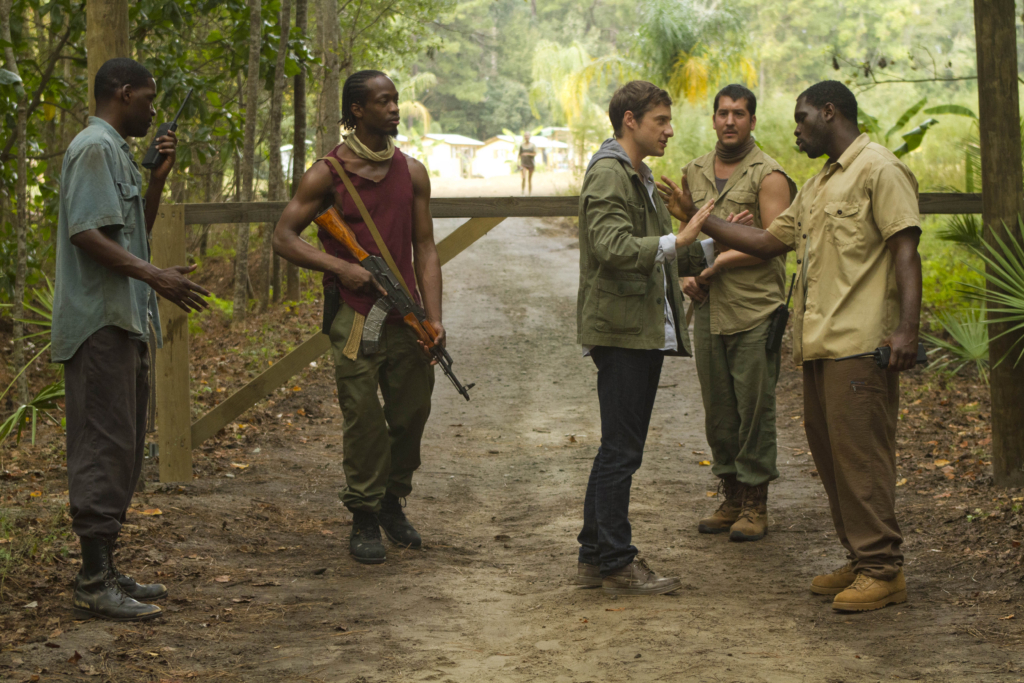 The guard asks for their passports in exchange for entrance. Sam refuses to give his up and returns to the truck, while Patrick tries to explain their situation to the guards. The sign above reads Eden Parish. At this point, Patrick’s sister Caroline (Amy Seimetz) shows up to save the day. She gets the guards to back off and escorts the men to their cabin to get settled in.

We then get to meet some of the townspeople as the film crew interviews them for their documentary. Everyone seems really happy and lucky to be living at Eden Parish. They community boasts its own Pavilion, Medical center, Cottages, Laundry, Farm and Cattle — making interaction with the outside world unnecessary. I should also mention that everyone who left the outside world to come to Eden Parish were required to sell of of their belongings before doing so.

The only people that come off strange, refusing to be interviewed, are Savannah (a mute little girl) and her mother. They say they aren’t allowed to speak to outsiders. All those who are interviewed repeatedly mention a man called Father/Pastor. Sam is eager to get an in-depth interview with the apparent leader of the community. At about 25 minutes into the movie is where things start to really get interesting as we are introduced to the Father, played by Gene Jones who nails his role perfectly. 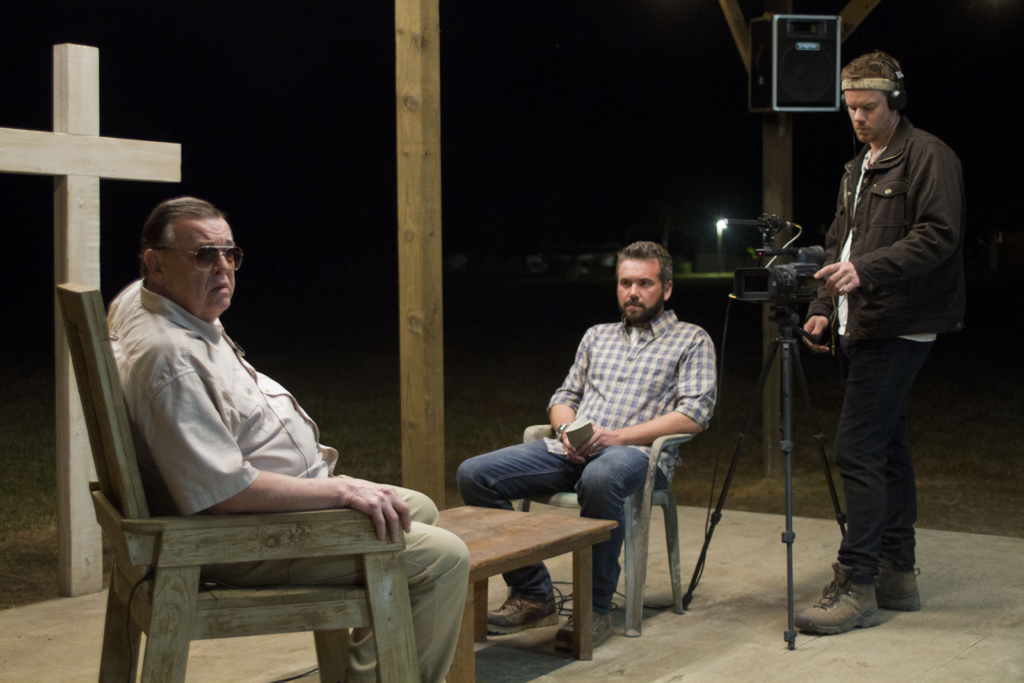 During his interview, Father explains how he got his moniker. “Some people see anyone who extends a helping hand as a father figure.” His real name is Charles Anderson Reed. He claims that everyone who came to this place was born into nothing, the outcasts and the unwanted. He explains that, if you come to Eden Parish seeking community, you will be greeted with open arms and given a place to sleep, a job and a purpose. You’ll also be a part of a family, where you’ll be loved and accepted. As nice as that all sounds, it becomes painfully clear that the members of the community have been brainwashed.  This interview scene was just crazy, intense and exceptionally well done. It was definitely one of my favorite scenes.

Now things start to get weird during the night. Savannah, the mute girl, sneaks Sam a note that reads, “Please help us.”  Sam and Jake try to find Patrick to figure out what’s going on. There is some eerie music playing, and the guys with the machine guns are standing patiently by. As they are looking for Patrick, they go into One of Father’s cabins where they find everyone’s passports and belongings. At this point, Caroline appears out of nowhere and explains that Patrick is not available.

For those who felt the film was a bit slow up to this point, it’s about to become a roller coaster ride. Sam and Jake find Savannah’s mother and a few other people. We get confirmation to what we suspected all along, this place is not what it seems. We learn Father hurts people who go against the Parish. We also get the big reveal that Caroline is a part of all this. Savannah’s mother says Father will not let them leave and explains that they are being manipulated. She also says that Father hurt Savannah, and that’s why she doesn’t speak anymore. 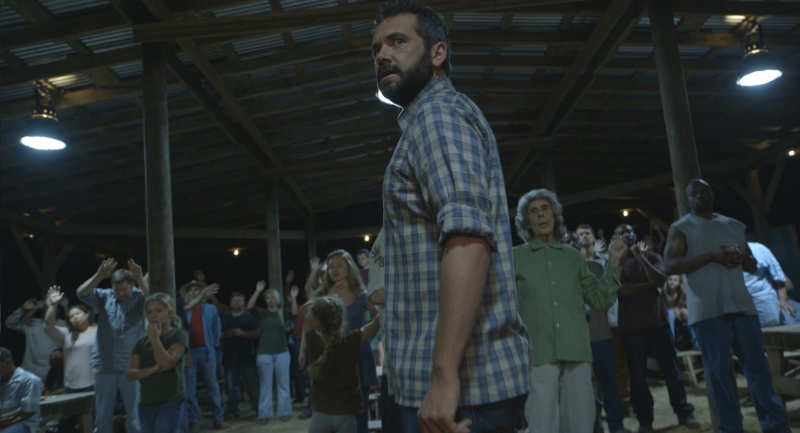 The next morning, Sam & Jake wake up to find a bunch of the people of the community arguing with Caroline because they want to leave with the men back on the helicopter. But the helicopter won’t hold all these people. Caroline starts acting insane and freaking out, shouting that Father warned her this would happen. Sam sends Jake back to the the helicopter to warn the pilot and plead with him to wait a little bit longer so they can rescue some of the community members. He refuses at first, and then something shocking happens.

Suddenly, sirens go off and the film kicks into high suspense mode. I was on the edge of my seat for the last 30 minutes. I almost couldn’t believe what I was watching. When Father speaks, it’s so entertaining. You really want to like him, but you realize he’s simply corrupt, evil and manipulative. My jaw was on the floor during the entire ending of the movie.

During this point in the movie, we find out what the movie’s title is all about. When things start to get crazy, Patrick is still nowhere to be found. My only complaint about the final scenes were regarding some of the choices West made to move the story forward. Some of the actions taken by the members of the community seem very unrealistic. However, it does reinforce how utterly and completely brainwashed they really are. In that context, what happens next makes a little more sense. 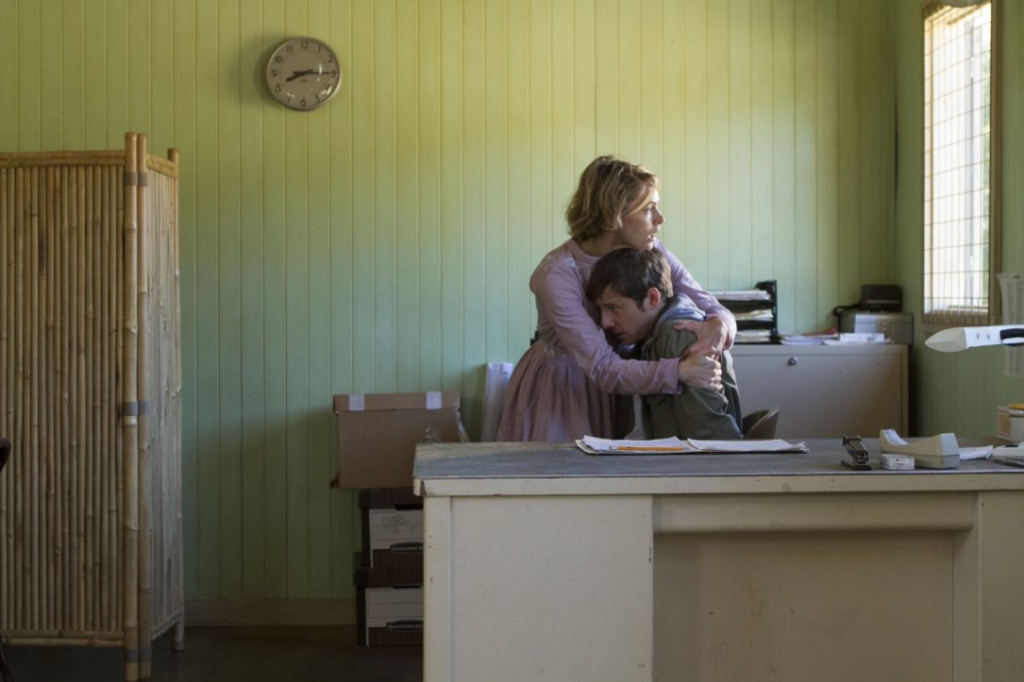 As Jack tries to make his way back to Eden Parish, we cut to a scene where we finally see Patrick with Caroline. What happens next, while I won’t spoil it for you, really upset me. Finally, Jack makes it back to the community and witnesses the aftermath of the prior events. We then get a heartbreaking scene with Savannah and her mom that was shocking and very upsetting. These last scenes are incredibly well shot by West, and he does a great job conveying the tragedy of the situation. We also get a great final turn from Caroline, who informs Jake about Sam’s whereabouts.

I didn’t really want to expose any spoilers for the last part of the film and am keeping some of this purposely vague. I really want you to experience it for yourself. These last few scenes are brutal. I won’t say how it all ends. However, those of you familiar with the inspiration for this movie probably have a pretty good idea how things turn out for this strange, isolated community under the influence of a cruel but charismatic leader. 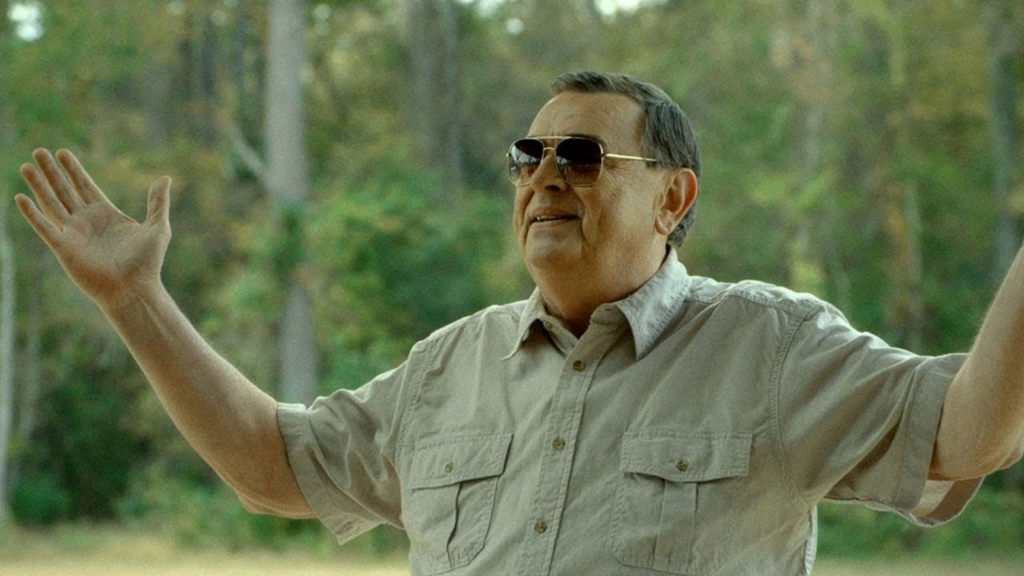 **Ok. Now for the big spoiler for those of you who don’t know. In case you’ve made it this far and still haven’t seen the film, I will once again encourage you to stop reading and go watch this movie.**

This film is a fictional representation of the Jonestown Mass Suicide Murder that happened back in 1978. If you aren’t familiar with the story, it’s really terrifying and disturbing… illustrating the powerful effect of group think under isolated conditions. It shows what can happen when individuals who feel like they don’t fit in anywhere come under the influence of a smart and manipulative leader.

Thankfully, I didn’t know anything about this when I watched The Sacrament for the first time, and that’s really how I recommend you watch it. Afterwards, you can read the history here: Mass Suicide At Jonestown. I will say, it’s impressive how close the film follows the events and how accurately it portrays the fear and terror of that tragic day. The movie makes the story feel very real… and very upsetting.

After watching this movie, I can say that I came out very disturbed and mortified, which was probably West’s primary intent. The whole film feels very real, aided in part by the found footage/documentary style filming technique. I really enjoyed all of the acting, especially Gene Jones as Father as well as Amy Seimetz. For what the movie is about, I was surprised to still be jumping in my seat and breathing heavily at moments of great suspense.