THEY LOOK LIKE PEOPLE brilliantly balances genuine human drama and emotion with moments of sheer dread and gut-wrenching terror. 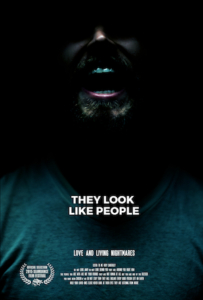 They Look Like People is a 2015 independent psychological thriller written and directed by Perry Blackshear, marking his feature film directorial debut. It’s about a man named Wyatt’s painful descent into madness. However, for most of the film, it’s not entirely clear if the madness is a result of severe mental illness… or a very real and insidious danger that only Wyatt is tuned into.

The movie toys with you, teases, and masterfully employs the art of misdirection to maintain its taught suspense and fear.

The film follows two friends, Wyatt (MacLeod Andrews) and Christian (Evan Dumouchel). Wyatt is a man who is down on his luck. One day he runs into his old pal, Christian, who is himself going through a difficult time. Both men have just broken up with their long time loves and are struggling to find their place in the world. Christian suffers from severe loneliness and a poor self esteem, listening to motivational tapes (voiced by his ex love) to get through the day. He sees in Wyatt a kindred spirit and immediately invites his old friend to stay at his place. The two immediately rekindle their old friendship in a way that signifies the depth of their bond and love for one another.

However, Wyatt is harboring a dark secret. He receives disturbing phone calls late at night… to a broken cell phone. The voice on the other line is always different, but the message is the same. They warn Wyatt of an impending war between humans and monsters disguised as humans who want to destroy humanity. They convince Wyatt that danger is everywhere and no one can be trusted.

This establishes the central conflict of the film. Whether real or imagined, Wyatt is entirely convinced that he has a responsibility to protect humanity from an ever-present threat. But the monsters he has to battle don’t look like monsters; they look like people… people he knows, people he loves, people he trusts and cares about.

Blackshear does an incredible job writing fully formed, multi-dimensional characters that draw us in and make us feel for their struggles. His two lead actors, responsible for carrying the bulk of the film, are also exceptional bringing those characters to life. The two men share an effortless chemistry that makes it easy to believe the strength of their friendship.

The film’s tension comes from this bond and the precarious situation the two men find themselves in. As an audience, we know that Christian is not safe around the unstable Wyatt (long before his own concerns begin to surface), and we feel the weight of Wyatt’s fears that the only person who truly seems to understand him and care for him may not be who he pretends to be.

Although not overly bloody or gory, the glimpses into the shadow world through Wyatt’s eyes are truly harrowing. We understand how dangerous and disturbed Wyatt is, and the anxiety we feel during certain scenes is almost unbearable. But we also see his humanity and suffering, deeply sympathizing with him and fearing him at the same time. Andrews does a remarkable job showing us both sides to his complex character, and it gives the film a depth and heart not often found in genre films.

All of this culminates in an ending that’s about as close to perfect as filmmaking gets. The final ten minutes ramps up the dread and uncertainty to the point of agonizing and gut-wrenching tension. Unlike so many indie films, there is a solid conclusion to the chaos. It’s a deeply satisfying resolution that honors both the horror and the humanity of the film.

In addition to writing and directing the film, Blackshear also served as editor, cinematographer and production designer. It’s a dazzling, near flawless debut from an exceedingly promising new filmmaker. Shedding all horror movie conventions, They Look Like People is a true standout in the world of independent genre films. It’s at once tense and terrifying, emotionally gripping, and deeply thought provoking. Please consider this a must see.