The World According to GIFs: Top 25 Villains

To celebrate Halloween, one company crunched the numbers to find the top 25 villains (according to GIF popularity) across film genres, including horror.

If there’s one thing horror films do best, it’s creating iconic villains. The titans of terror you love to hate — or hate to love — like Norman Bates, Freddy Krueger, Michael Myers, and Hannibal Lecter have long been hailed by horror fans. By how do they rank in internet popularity?

To celebrate the creepy season, Go.Frontier put together the top 25 most popular villains determined by GIFs. They did the math and uncovered not only the villains with the highest number of GIFs, but also the time of year people use villain GIFs the most.

The team consulted seven different sources to determine the twenty-five most popular villains, and then ranked them in popularity based on the number of GIFs present on giphy.com in July 2020. The GIF-making site, Tenor, is included as one of the seven sources because it provided valuable data about the GIFs. Tenor was used to find the frequency of each villain searched and the dates it was most/least popular.

Interestingly, the #1 villain in the study isn’t that scary, nor is he a genre icon.

He is, however, worthy of villain royalty status! In fact, many of the nightmare-inducing creeps and evildoers that made the top 25 list aren’t from horror films. But that doesn’t make them any less terrifying. 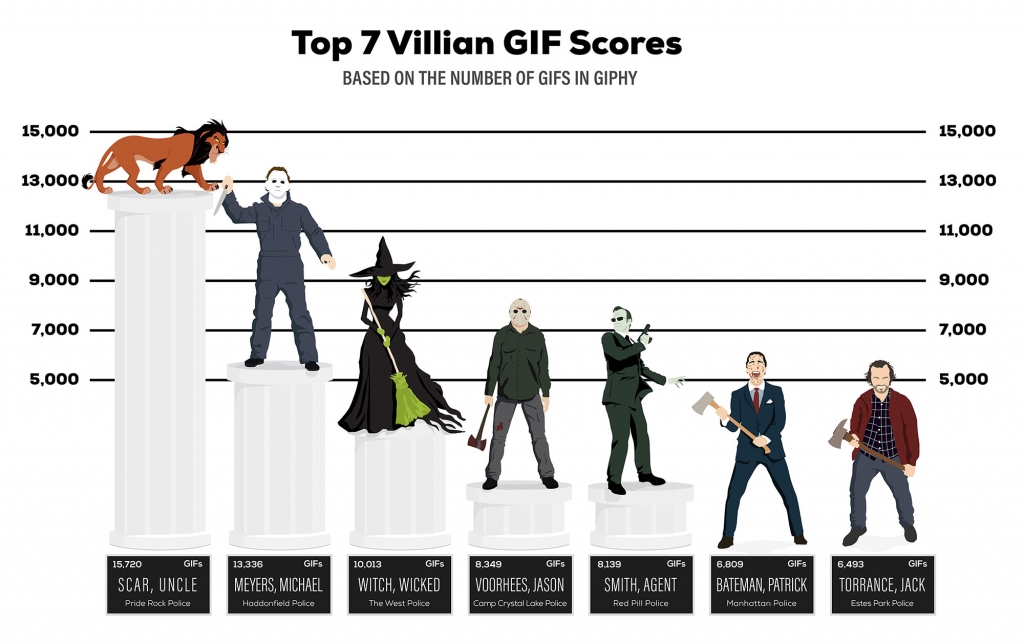 Here are some of the following spooky facts the researchers found during their hunt:

While the list is super fun, my only complaint is the lack of female villains. Maybe someone should do a similar look at how the bad girls of horror stack up. Surely we can get some love for Regan, Carrie White, Pamela Voorhees, Annie Wilkes,  Jennifer Check, and Angela Baker (among so many others). And I’d love to see where more horror icons rank, like Chucky, Jigsaw, Pinhead, Candyman, Ghostface, and even Dracula.