Hello, my Ghoulies and Goblins. My name is Miss J, and I will be your hostess this evening — serving you a list that will hit all the right spots for you. 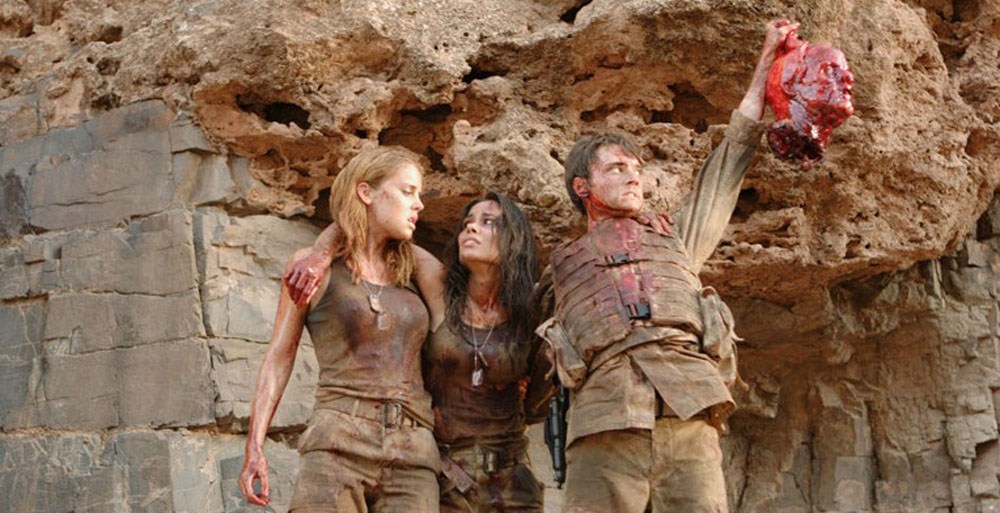 The first remake is also quite intense when it comes to torture scenes, but it’s the second remake that makes this list because of how extreme it is. That scene with the Port-a-Potty will always stand out to me. And if having cuts all over your body, and then being thrown in shit isn’t torture, then I clearly started this list off wrong. If you’ve had your stomach flip during that scene, maybe it will help you knowing that it was only dried prunes that were used inside of the tank in thePort-a-Potty.

The movie is about a group of soldiers that make a pit stop in the desert to deliver some equipment, but everyone from the base is missing when the arrive. Soon they will find out what happened to everyone and that a group of Cannibals have been watching their every move. Wes Craven is the writer and director of the original films, and for this movie, he teams up with his son Jonathan Craven (who is also a filmmaker) to give us a bloody adventure.

Michael Bailey Smith played Pluto in The Hills Have Eyes (2006) and, because of the special effects makeup team, he was able to come on once again and torture us in the second movie as the character Papa Hades. I hope your stomach can handle Shitman the Barbarian and the savage Cannibals that have a plan to expand their family.

Elisha Cuthbert plays a woman who has been kidnapped and is being tortured, and not just in painful ways. She finds out that she is not alone — a man is being held captive as well. They begin to form a special bond, and they will have to work together to find out who is doing this to them if they ever want to see daylight again.

The movie’s advertising team got into some heat when they put up billboards that showed actress Cuthbert in different forms of torture poses and abuse, which caused a lot of people to complain. There were a few editions of this movies, so make sure you watch the right one to get the full effect of the sickening experience. The torture in this movie is physical and psychological, and it definitely deserves a spot on this week’s list. 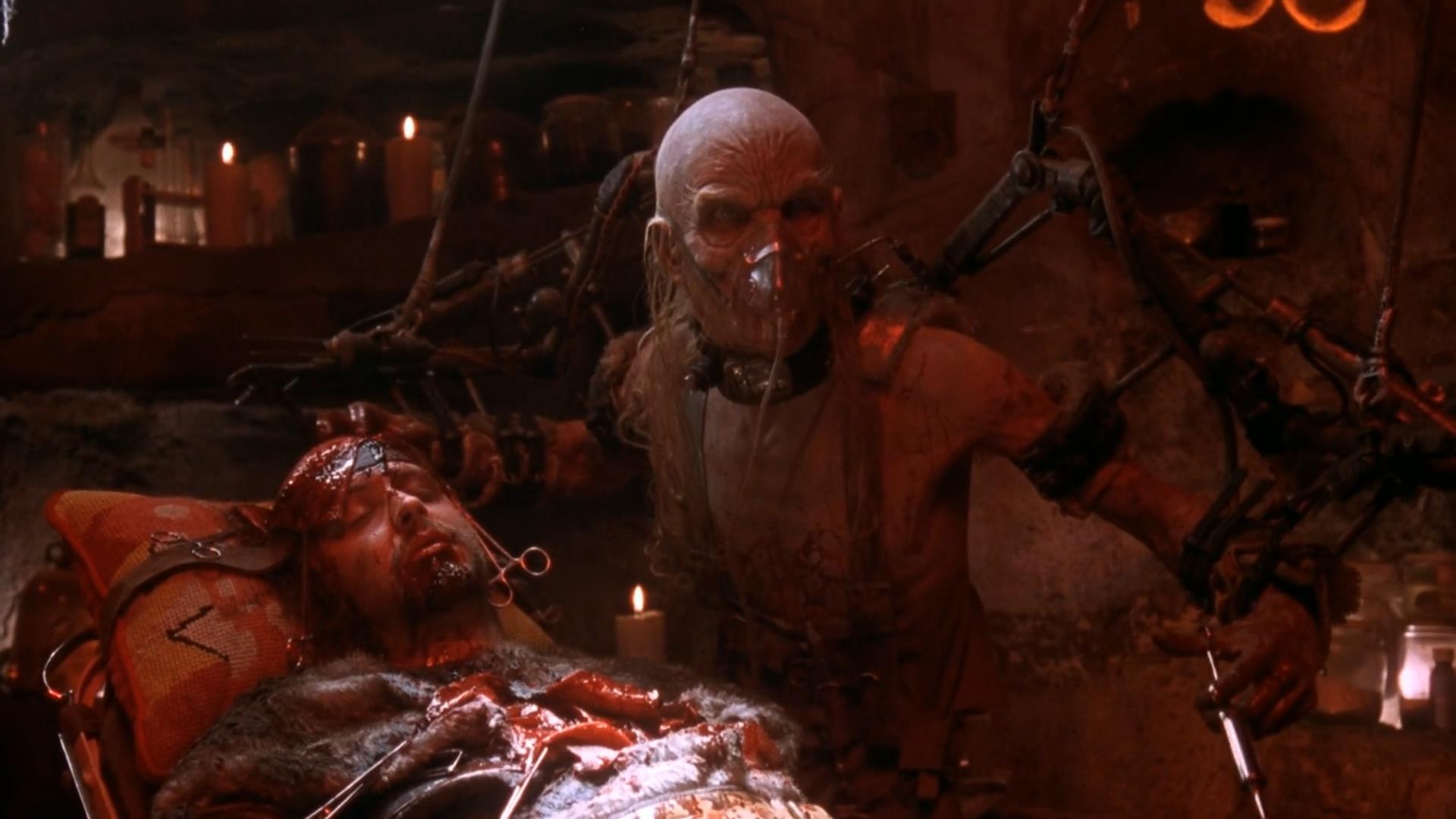 This movie has made plenty of lists in the past, but it’s just one of those movies that can fit in so many different categories. You get Manson family vibes with the characters that Rob Zombie, the director and writer of the film, created. This twisted family is all about getting fucked up and doing fucked up shit! From torturing cheerleaders, to couples who just wanted to see a haunted tourist attraction, this family does not discriminate and will kill anyone just for their amusement.

Rob tried to get away with as much gore and torture for his first film, but a lot was cut, and he had to film scenes multiple times to make sure he had a back up just in case Universal didn’t like it. But don’t you worry your little black heart, there is enough torture for you to enjoy, as well as watching Sheri Moon Zombie’s first on-screen performance as Baby.

You are definitely in for a good bloody time with Rob Zombie leading the way.

The actors give it all they have in this film, and some scenes are just too hard to watch. You will get emotionally invested and feel like you are being tortured by continuing to watch this poor couple go through hell. The movie did start some controversy when it was first released by depicting the chavs as nothing but violent and cruel beings.

Eden Lake is famous for feeling too real for some of the viewers. And even though the weapon of choice is a knife, there is a lot you can carve into flesh. 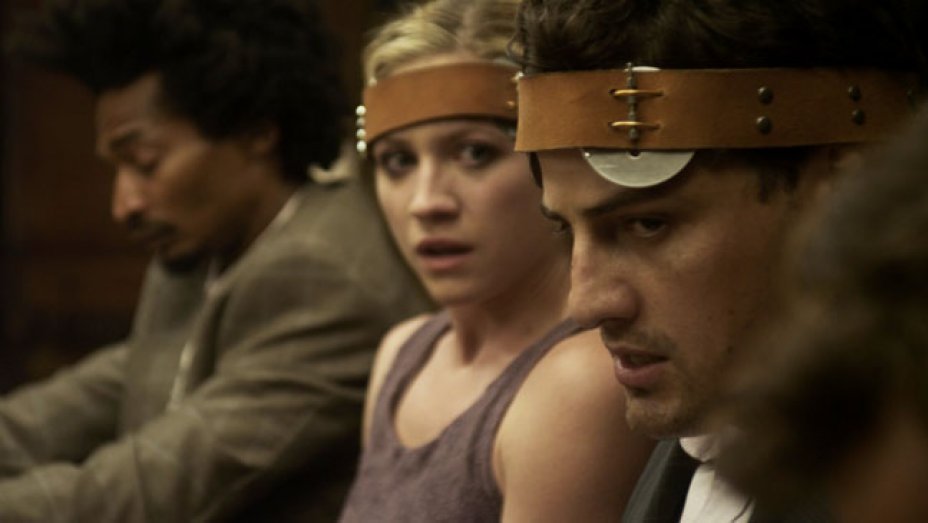 This movie is filled with an amazing cast like Jeffrey Combs, Robin Lord Taylor, Rob Wells and Brittany Snow. The best part of this movie is that Jeffrey Combs plays an aristocrat who tortures them all with a game of “Would You Rather?”

Being rich can become so boring, and that is why he invites a group of people to a dinner party that turns dark really quick. However, no one wants to leave because they could win an opportunity of a lifetime. They will have to go through psychological and physical torture to get to the next round — and will have to hurt each other if they want a chance to win. The trick is, they only have fifteen seconds to make a choice or else they lose the game.

The movie is on Neftlix, and you can watch the torture for yourself right now to see if you would survive the game. 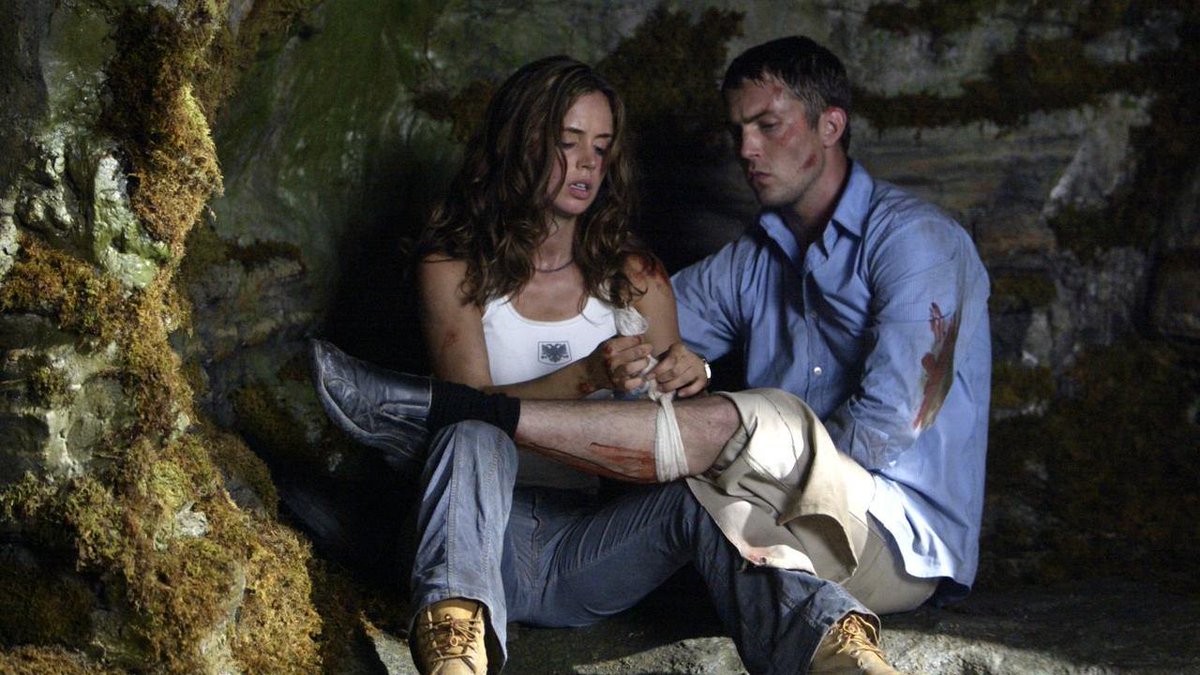 The actors themselves endured a lot of real torture when they all got covered in poison ivy. Then both Desmond and Emanuelle ended up with injuries. Desmond broke his ankle, and Emanuelle dislocated her shoulder during the scene where she falls through the trees; you can actually hear the dislocation in the film.

Due to them experiencing real agony and being covered in sweat from running in the heat from inbred cannibals, this movie definitely belongs on this list.

A writer takes off to a cabin in the woods to work on her book, but her little getaway turns into a nightmare very quick. After being brutally assaulted and left for dead, Jennifer comes back for revenge — and it’s the villains that get tortured in this flick. As brutal as it gets, it’s kind of satisfying to watch.

Sarah Butler was unsure if she could take on the role of Jennifer because she doesn’t enjoy watching horror movies and didn’t understand why she should act in one, but she knew she had to take on this badass character. Sarah had a safe word for the rape scenes that she thankfully never had to use, just in case things got too intense for the actress.

I have not seen the original, but if you are brave enough to watch it and the remake, then you my friend, are my kind of people. 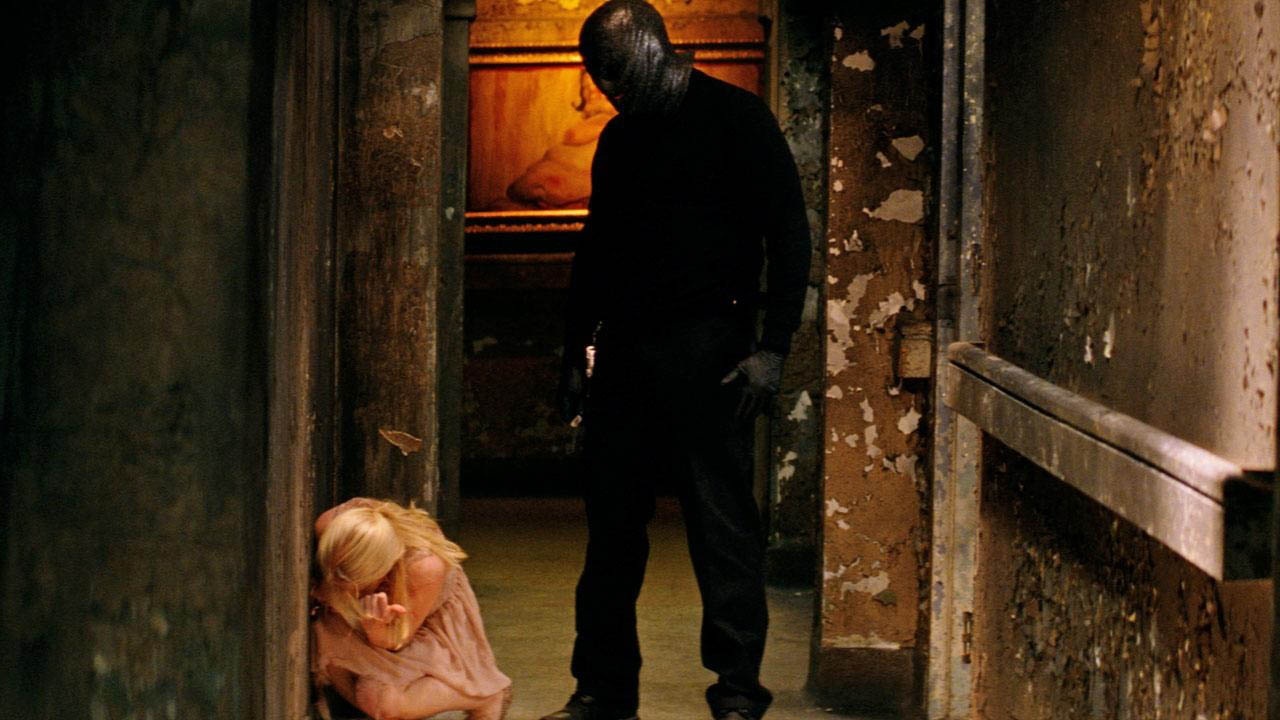 This movie was originally written as a SAW prequel but was passed upon and became The Collector instead. This film also spawned a sequel that is just as intense, if not more so. Josh Steward plays a character who owes money to some bad people, and he decides to break into his rich client’s house. But what he walks into is a complete torture chamber.

The homeowners who were supposed to be away for the weekend are being held captive in their own home by someone very sinister. He sets booby traps all over the house, so no one can escape. If they try, they are in for a lot of pain. Not even the family’s cat is free to escape this hell. 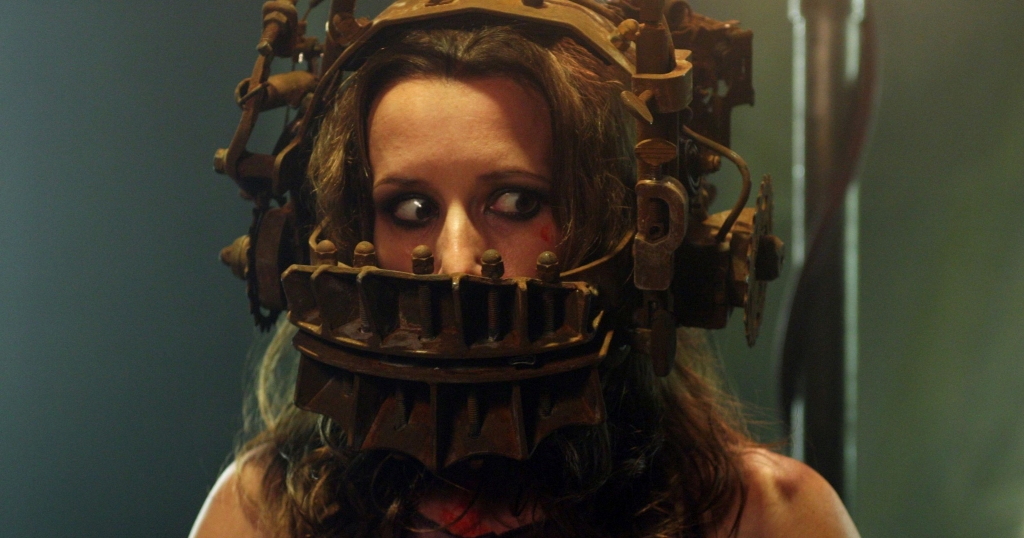 Jigsaw is a complex killer in the sense that he doesn’t actually kill anyone. So how does someone that doesn’t kill anyone create so much blood and gore? He gets his victims to do it all on their own. There was some real blood and gore on set. In the scene where Amanda is looking for the key for the reverse bear trap that is stuck to her face, she is actually searching through pig intestines.

There are a total of 8 movies in this franchise, and each get gorier and more torture-filled then the next. And if you look away at the end during the scene with a saw and a foot, I won’t hold it against you. 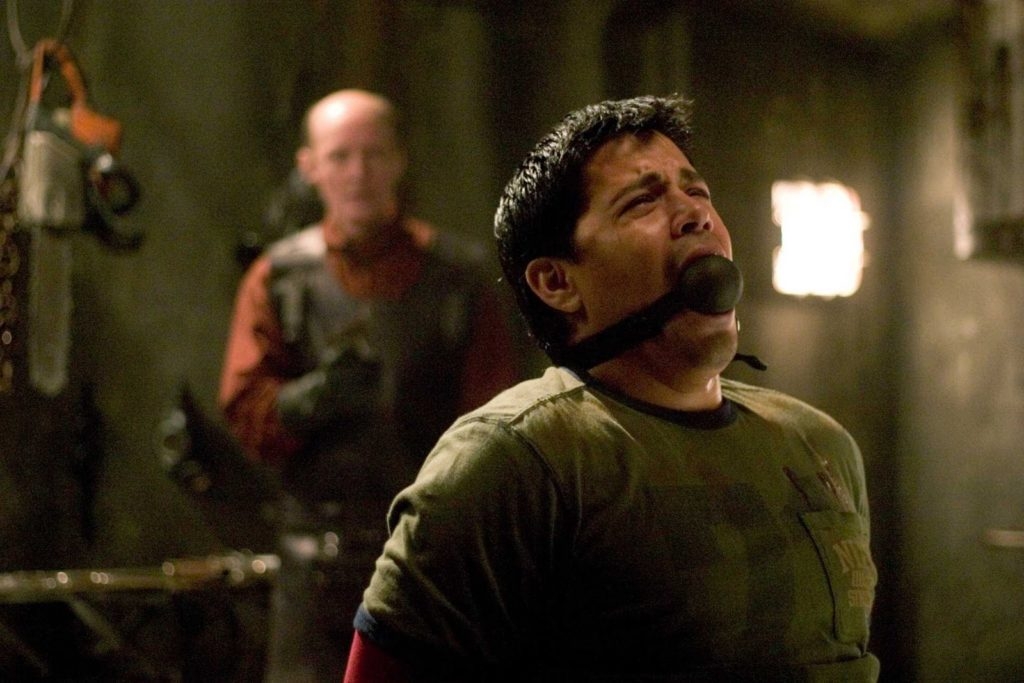 This is the movie that made people never want to backpack across Europe ever again, thanks to director and writer Eli Roth. It seems rich people get bored very easily, because this movie introduces us to a group of aristocrats who pay a pretty penny to murder people in any which way they please. We follow a small group of tourists as they get picked off one by one and are brought to a place I can only describe as purgatory.

The gore in this movie is plenty, and there are two movies to the series. The actress Jennifer Lim actually broke down crying after she saw the make up on her face for the torture scene she was about to perform. She went on to say she now understood why her character commits suicide after seeing what has happened to her face, and I’m warning you now, it’s not pretty.