This October I attended all THREE days of Upstate New York Horror Film Festival with my best friend, and co reviewer, Josh Blodgett! It was a wild and weird three days to say the least. Full of freaky films, fantastic folks and sleep deprivation, my experience at my hometown of Rochester’s ONLY horror film festival, was everything I could have hoped for.

Suffice it to say, if you live in or are planning on visiting Rochester, this festival is a MUST visit. Now…on with those three days… 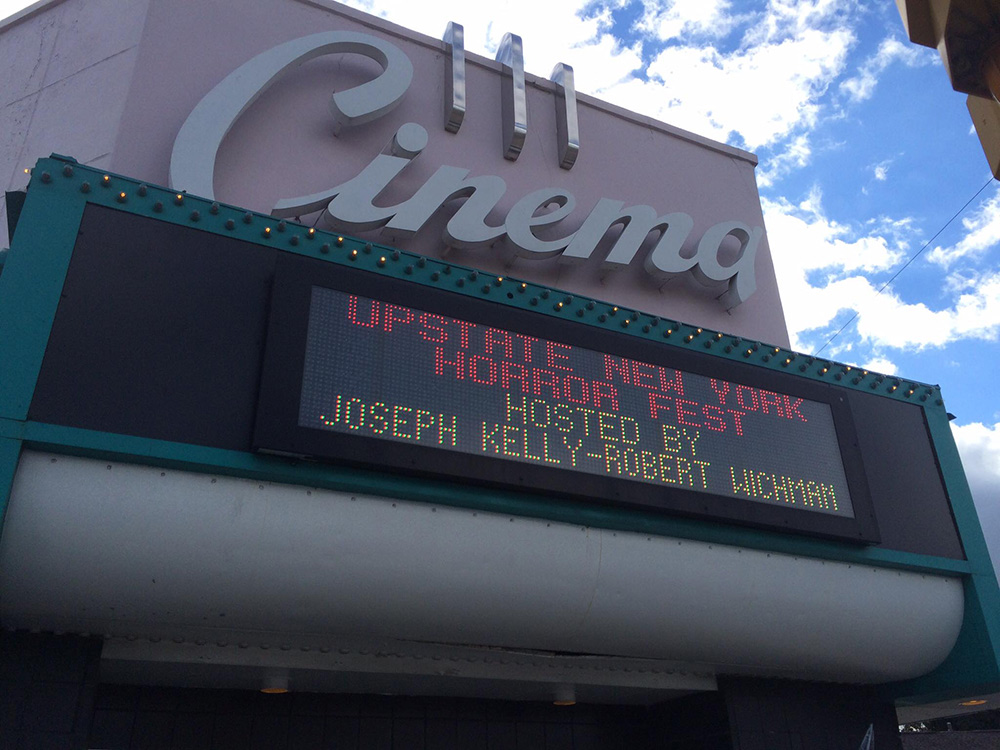 Day One of Upstate New York Horror Film Festival (UNYHFF) started out as most adventures do, with some initial confusion and aimless wandering. My friend Josh Blodgett and I (who I film YouTube videos with on our channel Psychic Celluloid Signals) arrived at the festival, or at least where it was supposed to take place, half an hour before it started. We were both groggy, what with not getting enough sleep, and were both hungry, having been too excited and exhausted to remember to eat.

The festival was being held in a spacious nursing home next to (appropriately) a hospital. When we walked into the nursing home, parking at what we assumed was the main entrance, we found ourselves in a large unoccupied room, with a sinister black piano in one corner and one Wii in the other. The walls were the color of peaches, and the only sound that could be heard was the growling of our stomachs. 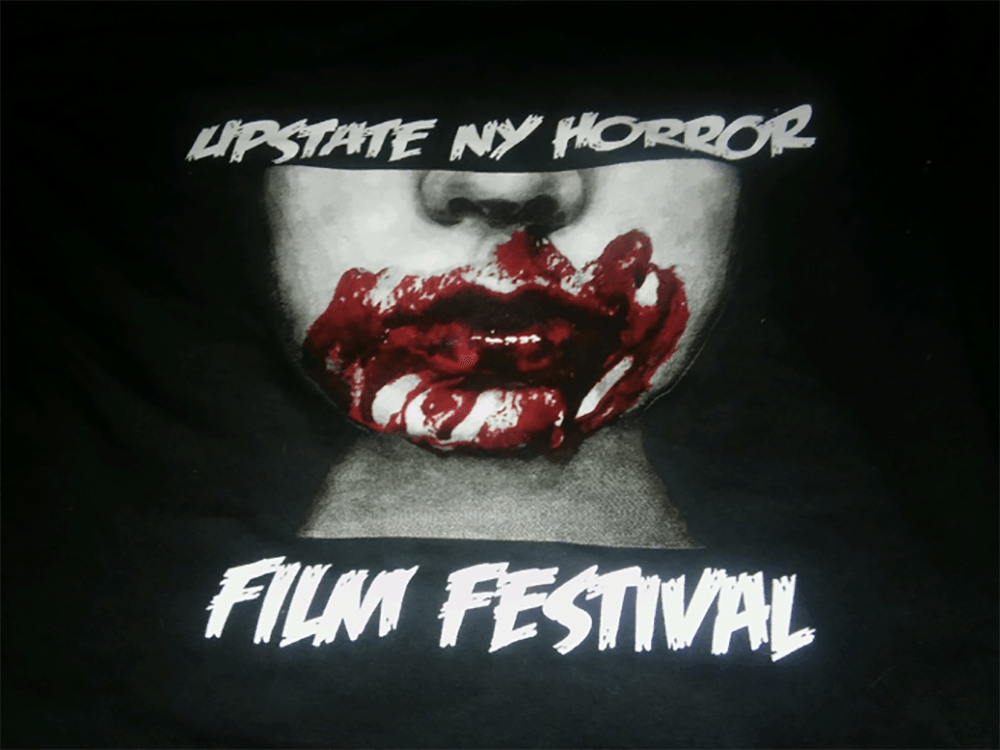 We were VERY confessed, and, like zombies, stumbled from room to hall without a clear idea of where we were going, in search of someone, anyone, who could direct us to the only horror film festival in our home town. Soon after, a gaggle of elderly women, and one middle aged man, emerged from the peachy recess of the adjacent hall, and we pounced on them hungry for info on where to go. Unfortunately for us, these people had nary a clue of where to go, BUT, they did know of an all-powerful all seeing receptionist at the information desk, that might have a clue.

We eventually arrived in a smaller dining hall, where the two screening rooms we were looking for stood off to the side. Next to them was a man with hyper-realistic Universal monster tattoos setting up a black bedecked table — a table whose banner stated that we had indeed arrived at our intended destination.

The man, we found out, was Robert Wichman. He and his best friend and film collaborator, Joseph Kelly, founded the festival. Rob and Joe would become our good friends over the next few days, and, on the final day of the festival, they allowed us to interview them for our YouTube Channel.

After this initial encounter, my friend Josh and I met a man with a homemade Halloween 3: Season of the Witch sweater getting coffee. From this encounter we received our first of many wonderful gifts/freebies from the fest: two Blu-rays containing two shorts, Totentanz and Bigfoot Radio by Tim Hall, the man in the Halloween sweater who we found out had spent the good part of last night finishing his sweater for the fest. 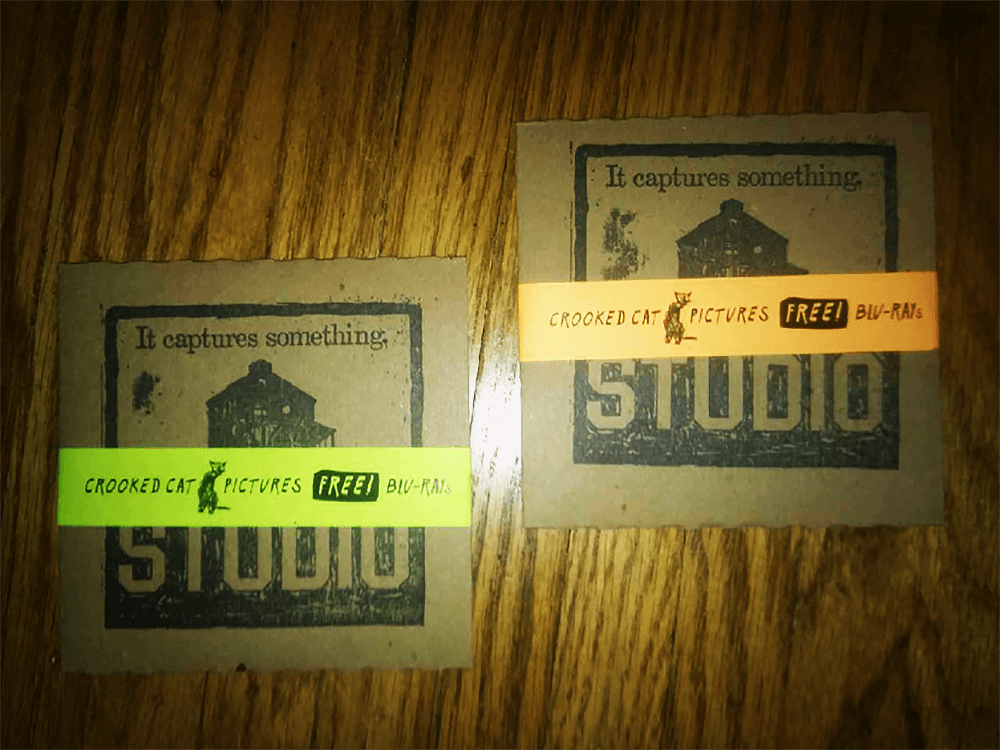 Following this, we sat down to one great block of horror shorts (and one feature) and then a special premier screening of the new Friday the 13th: Part 3 documentary, and then a screening of the first film that spawned the Friday franchise! It was a great first day and my friend Josh and I ended it with a recap video for our channel, something we would do every day of the fest, before returning to our respective homes and quickly falling asleep.

Four hours later, we were up again. Day two of the fest had risen and demanded our attention!

It was day two of the fest and, while we weren’t rested, my friend Josh and I were more than a little exited! Today we were being treated with TWO blocks of horror shorts and features, plus a lecture on classic horror. The second day began much like the first. Josh and I stumbled in like the recently risen dead, bleary eyed, and barely breathing. Four hours of sleep was not a lot, but a lot of horror films awaited us — so we thought it was more than a fair trade off.

After looking over the table of freebies and things to purchase, we grabbed some food and caffeine. We then sat down to the two blocks of films we had been promised. We saw over 60 films, six features and 54 shorts of vastly varying lengths, styles, sub genres, and languages. (Watch our video recap below to find out what stood out to us during these screenings.) 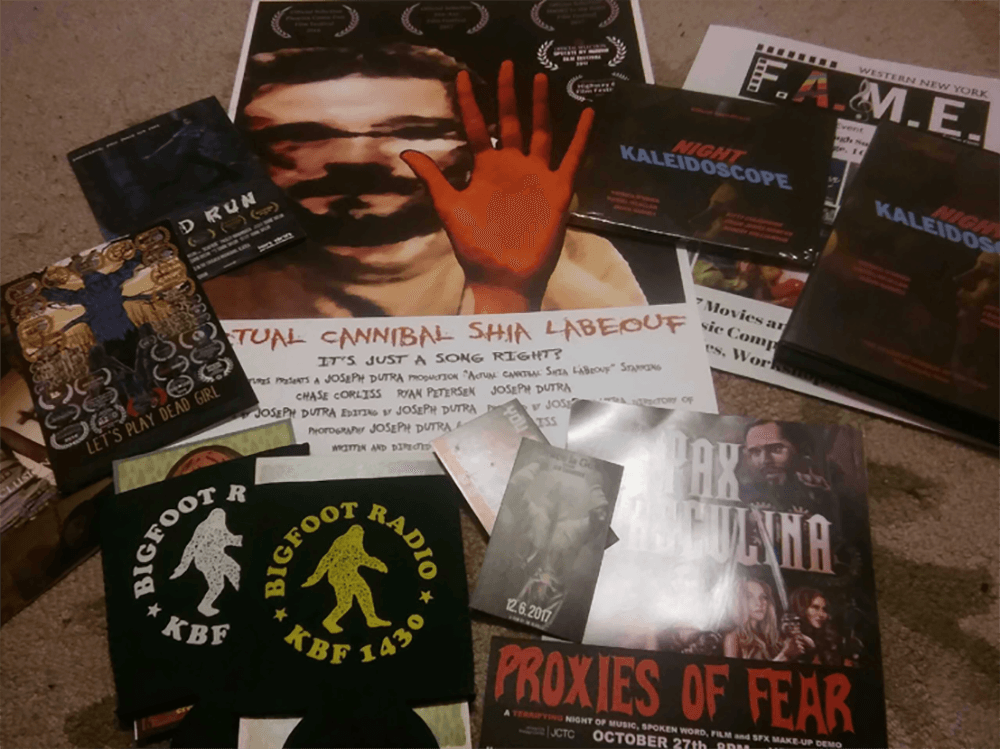 After two film blocks, we went to the classic horror lecture done by the charismatic, engaging, highly knowledgeable an