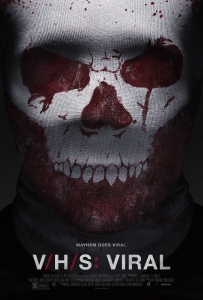 V/H/S: Viral is the third installment in the V/H/S series, once again following the anthology format and featuring the work of various established as well as up-and-coming genre filmmakers. The first film featured shorts by the likes of indie darlings Ti West, Adam Wingard and Joe Swanberg. Part 2 included efforts from Gareth Evans, Eduardo Sanchez, Jason Eisner and others. Viral has one established director, Nacho Vigalondo (Timecrimes) and several other on-the-rise directors, including Marcel Sarmiento, Gregg Bishop, and duo Justin Benson and Aaron Scott Moorhed.

Let me preface this review by disclosing that I’m a fan of the first V/H/S and the, in many ways, superior sequel S-V/H/S. Like most anthology films, the previous two installments of this franchise suffer from a bit of unevenness and can arguably be described a “mixed bag.” I can also acknowledge the inherent frustrations associated with found footage films. However, I felt the genuine inventiveness and creativity of the films more than compensated for any shortcomings.

The first film, while far from perfect, felt fresh and original. It was able to at least bring something new to the oversaturated found footage subgenre, with a nostalgic throwback to 80s horror that gave it and endearing quality. The second film was more polished than the first and managed to improve on the overall quality of the segments, giving us a solid sense of where this series could go with the right talent and resources. There was no reason to expect the third installment to take such a nosedive in overall quality and entertainment value.

V/H/S: Viral attempts to add in a bit of meta commentary on the age of viral videos and the desperate quest for Internet celebrity. This message is delivered through the film’s wraparound story called “VICIOUS CIRCLES”— the segment that begins, ends, and interconnects the rest of the film.

The basic premise revolves around an ice-cream van involved in a police chase that circles a neighborhood and brings with it death and destruction. Crowds come down to watch, with some filming the action while others get drawn into it. The story is intercut with footage of a couple playing out their relationship on camera, with the underlying messaging focused on society’s desperate need for our lives to go viral.

Regardless of the intent, Sarmeinto’s contribution fails to effectively communicate its concept. The idea of young videographers exploiting one another’s misfortunate for a chance at fame, only to become the victims for someone else’s camera, is intriguing and worth exploring. Unfortunately, “Vicious Circles” ends up a confusing mess that is disjointed and hard to follow. It’s intentionally poorly shot and edited to give it that “authentic” amateur video feel, with constant static blurs and spliced-in frames of previous V/H/S installments. The end result, however, is highly distracting and frustrating to the point of being almost unwatchable. And it does little to frame or properly connect the other stories.

The other three segments could stand alone, like self-contained episodes of a modern-day Twilight Zone, linked only by the creative point-of-view filming techniques.

SEGMENT ONE: DANTE THE GREAT

The first segment directed by Bishop is the most classical of the shorts. “Dante the Great” is framed as a crime documentary about an ambitious magician who acquires a demonic cloak once owned by Houdini. He makes an unholy alliance with a supernatural force in exchange for real magical powers and overnight success. The documentary format provides some depth and improved structure to the found footage style, and Bishop gives us some nice visual effects. The segment has a nostalgic Tales From the Crypt vibe and makes for an entertaining morality tale. Yet there’s very little to actually disturb or frighten.

It’s no surprise that the strongest segment comes courtesy of the incredibly talented Vigalondo. “Parallel Monsters” chronicles a meeting between alternate-dimension doppelgangers who discover that their identical realities aren’t so identical after all. Vigalondo does a great job creating both tension and humor throughout. However, the segment works much better while it’s hinging on the mystery of what is so different about each man’s universe. Once that mystery is revealed, it’s more comical than frightening.

The third, and weakest, installment by Benson and Moorhead called “Bonestorm” features some teenage skateboarders filming their latest video via wide-angle helmet-cams. When the boys head down to Tijuana to scope out an exclusive skate site, they accidentally stumble upon a demonic séance that leads to a battle for survival between the living and the undead. It’s got some fun elements, but ends up as a confusing, shaky-cam visual experience that feels similar to watching a first-person shooter video game. Unlike the previous two segments, there’s little in the way of a real point or payoff.

Apparently, Viral was planned with a frame story and an additional segment that were scrapped in favor of a leaner run time. Unfortunately, this may have done a great deal to hurt the coherence of the film. While a couple of the segments work reasonably well on their own, there’s nothing truly great or memorable here. And, unlike the previous two installments, there’s far more weaknesses than strengths.

V/H/S: Viral offers little in the way of genuine scares. While a couple of the segments are entertaining, there’s no continuity and nothing to tie the shorts together. While the entire series can be described as a mixed bag, the third installment gets too much wrong and does too little right to make it a truly worthwhile watch.