“The Black Cat” is a true unsung gem of the pre-Code era, a chilling classic featuring genre legend Karloff plus Lugosi at his finest. 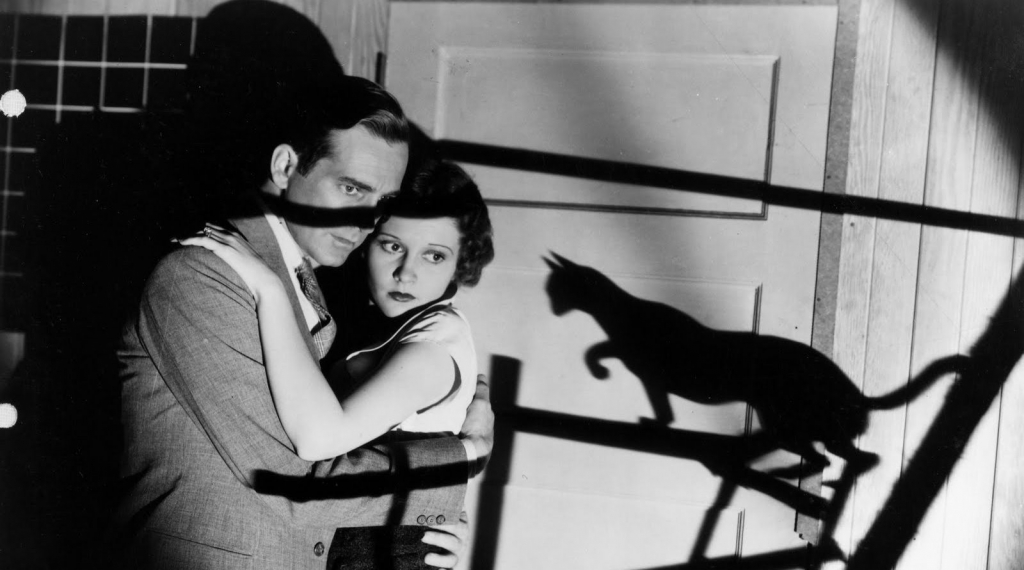 It may seem odd to have a 1930s Universal Studios horror movie as part of Weird Wednesday. But bear with me as I make the case for this Karloff and Lugosi co-starring vehicle.

Released in 1934, The Black Cat is the first movie collaboration between Boris Karloff and Bela Lugosi. The title references an Edgar Allen Poe short story, first published in 1843, about an unnamed man who develops an irrational hatred for black cats leading to the murder of cats and, eventually, his wife.

The 1934 movie uses the title but has a very different story. It is a stretch to say that the movie is loosely based on the story.

Dr. Vitus Werdegast (Bela Lugosi) is traveling on a train to visit an old friend of his. On the train, he shares a compartment with a newlywed couple, Peter (David Manners) and Joan (Jacqueline Wells). Werdegast explains he is visiting an “old friend” of his and describes his time spent fighting in World War I, including his capture and imprisonment in a Siberian war camp where he languished for 15 years.

Later, the three share a bus from the train stop, when they have a horrific accident caused by bad weather. The driver is killed, and Joan is injured. Peter, Werdegast, and Werdegast’s assistant carry an injured Joan to the nearby home of Werdegast’s friend Hjalmar Poelzig (Boris Karloff). 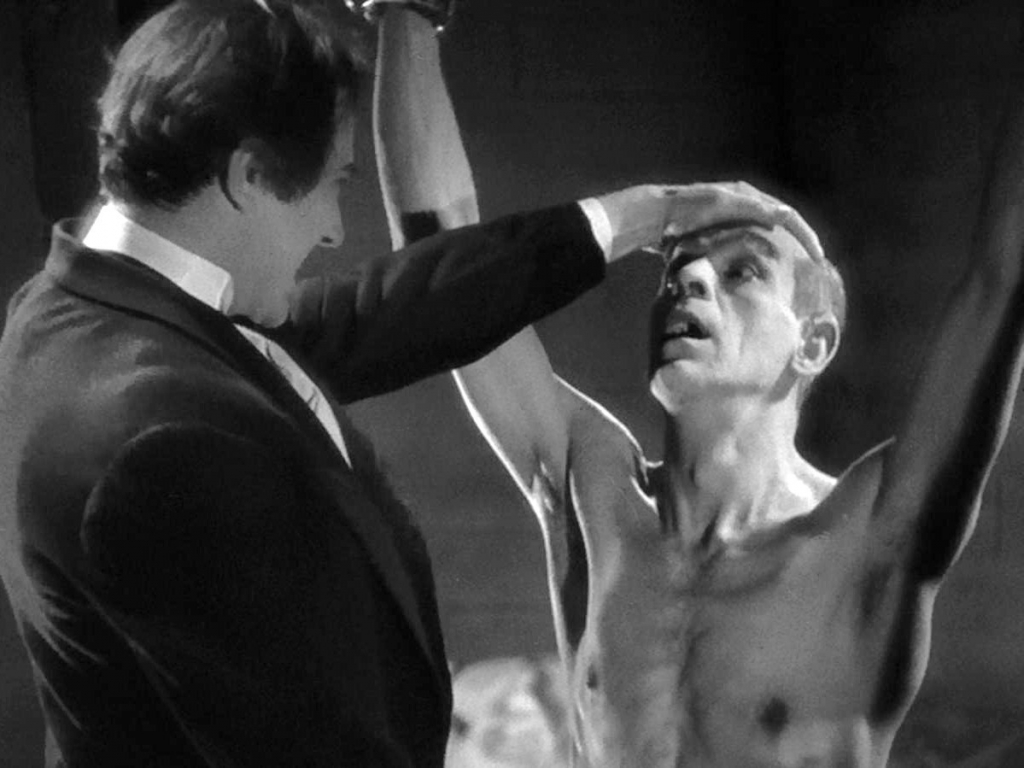 Werdegast tends to Joan’s injuries when the brooding Poelzig arrives. He immediately fixates on Joan, transfixed by her beauty. In a meeting between Werdegast and Poelzig, we learn that Poelzig betrayed his people during the war which led to Werdegast’s imprisonment. Poelzig also took away Werdegast’s wife and daughter, and Werdegast demands to know what happened to them.

It is also revealed that Werdegast has a great fear of cats, and when a black cat appears, he throws a knife at the feline killing it. Joan awakens and acts strangely as if she’s in a fugue state, possibly falling under the control of Poelzig.

Poelzig, as he wanders his private space, carries a black cat for protection. He tours an underground area where he’s kept the corpses of women he’s killed, preserved and encased in glass. One of the women is Werdegast’s wife.

As Poelzig’s plan unfolds, and Werdegast learns what happened to his wife and daughter, he begins to burn with anger and the need for revenge as Poelzig plots to take Joan for his own and sacrifice her in a black mass.

The Black Cat was released before the enforcement of the Hays Code, which set the guidelines for self-censorship in American pictures.

Even though this was released pre-Code, there is some surprise that Universal Pictures released this film due to its content about Satanism, black masses, and its grim ending.

Many of the more gruesome aspects of the film are hinted at, and the lack of explicitness lends a touch of eeriness to the film that might have otherwise been lost with more explicit scenes. It was 1934, so don’t expect a Gaspar Noe movie. But let yourself get lost in the story and the incredible performances by Bela Lugosi and Boris Karloff, and allow your mind to fill in the blanks.

Boris Karloff’s portrayal is inspired by the spiritualist Alistair Crowley, and Karloff has never been more menacing nor more sadistic and evil.

Bela Lugosi’s vengeance-seeking Werdegast is a simmering cauldron of anger and madness. As the true depth of Poelzig’s depravity is witnessed by Werdegast, the more unhinged Lugosi plays his character until, when the final evil act is revealed, Lugosi lets all of his anger and madness reveal itself to the audience.

This has to be one of Lugosi’s finest performances.

While not mentioned among the horror greats, I have come to think of The Black Cat as a shining jewel in Universal’s horror family. 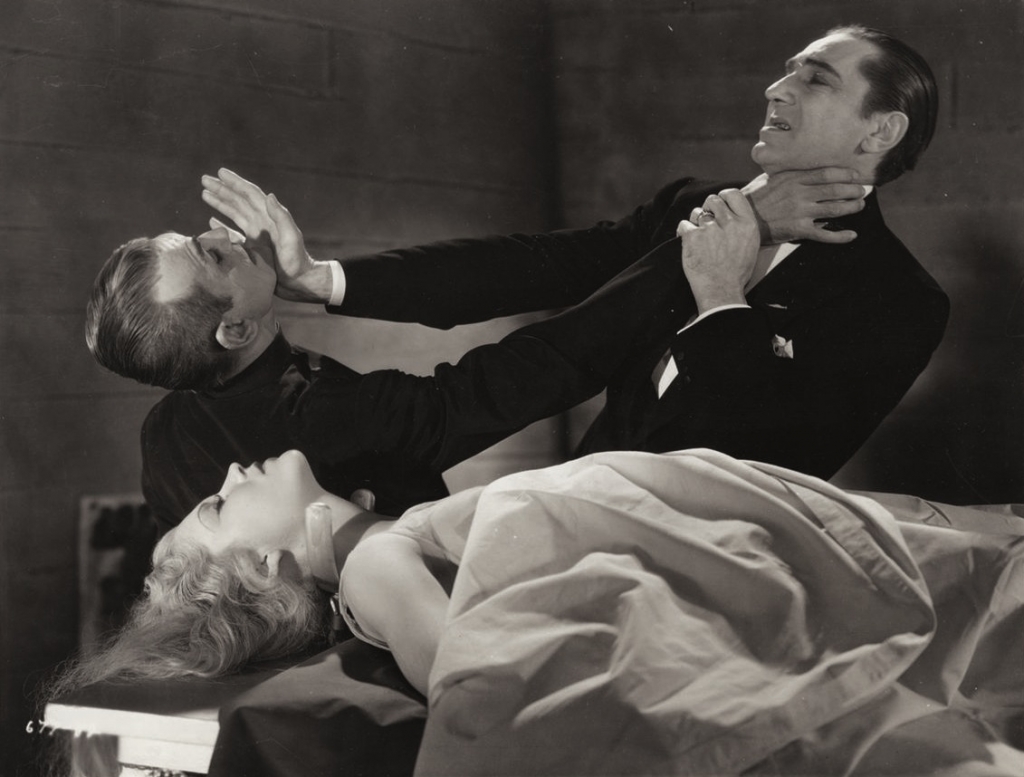 This movie should be discussed and revered alongside the legendary films Dracula, Frankenstein and The Bride of Frankenstein, and The Wolf Man.

The Black Cat is one of the few Weird Wednesday entries that happen to be one of the all-time great classic horror movies. You don’t want to miss out on this amazing Karloff-Lugosi starring fright fest.

“Next time I go to Niagara Falls.”

“That’s what I’m going to do to you now! Tear the skin from your body, bit by bit.”

As of this writing, THE BLACK CAT is not on a streaming service but is part of Shout! Factory’s Universal Horror Collection, Volume 1 Blu-ray set.